the will to power as disappearance

Foucault, Baudrillard, et al. have discussed various modes of “disappearance” at great length. Here I wish to suggest that the TAZ [Temporary Autonomous Zone] is in some sense a tactic of disappearance. When the Theorists speak of the disappearance of the Social they mean in part the impossibility of the “Social Revolution,” and in part the impossibility of “the State” — the abyss of power, the end of the discourse of power. The anarchist question in this case should then be: Why bother to confront a “power” which has lost all meaning and become sheer Simulation? Such confrontations will only result in dangerous and ugly spasms of violence by the emptyheaded shit-for-brains who’ve inherited the keys to all the armories and prisons. (Perhaps this is a crude american misunderstanding of sublime and subtle Franco-Germanic Theory. If so, fine; whoever said understanding was needed to make use of an idea?)

As I read it, disappearance seems to be a very logical radical option for our time, not at all a disaster or death for the radical project. Unlike the morbid deathfreak nihilistic interpretation of Theory, mine intends to mine it for useful strategies in the always-ongoing “revolution of everyday life”: the struggle that cannot cease even with the last failure of political or social revolution because nothing except the end of the world can bring an end to everyday life, nor to our aspirations for the good things, for the Marvelous. And as Nietzsche said, if the world could come to an end, logically it would have done so; it has not, so it does not. And so, as one of the Sufis said, no matter how many draughts of forbidden wine we drink, we will carry this raging thirst into eternity.

John Zerzan and Bob Black have independently noted certain “elements of Refusal” (Zerzan’s term) which perhaps can be seen as somehow symptomatic of a radical culture of disappearance, partly unconscious but partly conscious, which influences far more people than any leftist or anarchist idea. These gestures are made against institutions, and in that sense are “negative” — but each negative gesture also suggests a “positive” tactic to replace rather than merely refuse the despised institution.

For example, the negative gesture against schooling is “voluntary illiteracy.” Since I do not share the liberal worship of literacy for the sake of social amelioration, I cannot quite share the gasps of dismay heard everywhere at this phenomenon: I sympathize with children who refuse books along with the garbage in the books. There are however positive alternatives which make use of the same energy of disappearance. Home-schooling and craft-apprenticeship, like truancy, result in an absence from the prison of school. Hacking is another form of “education” with certain features of “invisibility.”

A mass-scale negative gesture against politics consists simply of not voting. “Apathy” (i.e. a healthy boredom with the weary Spectacle) keeps over half the nation from the polls; anarchism never accomplished as much! (Nor did anarchism have anything to do with the failure of the recent Census.) Again, there are positive parallels: “networking” as an alternative to politics is practiced at many levels of society, and non-hierarchic organization has attained popularity even outside the anarchist movement, simply because it works. (ACT UP and Earth First! are two examples. Alcoholics Anonymous, oddly enough, is another.)

Refusal of Work can take the forms of absenteeism, on-job drunkenness, sabotage, and sheer inattention — but it can also give rise to new modes of rebellion: more self-employment, participation in the “black” economy and “lavoro nero,” welfare scams and other criminal options, pot farming, etc. — all more or less “invisible” activities compared to traditional leftist confrontational tactics such as the general strike.

Refusal of the Church? Well, the “negative gesture” here probably consists of watching television. But the positive alternatives include all sorts of non-authoritarian forms of spirituality, from “unchurched” Christianity to neo-paganism. The “Free Religions” as I like to call them — small, self-created, half-serious/half-fun cults influenced by such currents as Discordianism and anarcho-Taoism — are to be found all over marginal America, and provide a growing “fourth way” outside the mainstream churches, the televangelical bigots, and New Age vapidity and consumerism. It might also be said that the chief refusal of orthodoxy consists of the construction of “private moralities” in the Nietzschean sense: the spirituality of “free spirits.”

The negative refusal of Home is “homelessness,” which most consider a form of victimization, not wishing to be forced into nomadology. But “homelessness” can in a sense be a virtue, an adventure — so it appears, at least, to the huge international movement of the squatters, our modern hobos.

What is the refusal of Art? The “negative gesture” is not to be found in the silly nihilism of an “Art Strike” or the defacing of some famous painting — it is to be seen in the almost universal glassy-eyed boredom that creeps over most people at the very mention of the word. But what would the “positive gesture” consist of? Is it possible to imagine an aesthetics that does not engage, that removes itself from History and even from the Market? or at least tends to do so? which wants to replace representation with presence? How does presence make itself felt even in (or through) representation?

“Chaos Linguistics” traces a presence which is continually disappearing from all orderings of language and meaning-systems; an elusive presence, evanescent, latif (“subtle,” a term in Sufi alchemy) — the Strange Attractor around which memes accrue, chaotically forming new and spontaneous orders. Here we have an aesthetics of the borderland between chaos and order, the margin, the area of “catastrophe” where the breakdown of the system can equal enlightenment.

The disappearance of the artist IS “the suppression and realization of art,” in Situationist terms. But from where do we vanish? And are we ever seen or heard of again? We go to Croatan [a word carved into a gatepost that was all that remained of a lost colony on Roanoke Island, Virginia] — what’s our fate? All our art consists of a goodbye note to history — “Gone To Croatan” — but where is it, and what will we do there?

First: We’re not talking here about literally vanishing from the world and its future: — no escape backward in time to paleolithic “original leisure society” — no forever utopia, no backmountain hideaway, no island; also, no post-Revolutionary utopia — most likely no Revolution at all! — also, no VONU [Shane Radliff’s idea of “VOluntary Not vUlnerable”], no anarchist Space Stations — nor do we accept a “Baudrillardian disappearance” into the silence of an ironic hyperconformity. I have no quarrel with any Rimbauds who escape Art for whatever Abyssinia they can find. But we can’t build an aesthetics, even an aesthetics of disappearance, on the simple act of never coming back. By saying we’re not an avant-garde and that there is no avant-garde, we’ve written our “Gone To Croatan” — the question then becomes, how to envision “everyday life” in Croatan? particularly if we cannot say that Croatan exists in Time (Stone Age or Post-Revolution) or Space, either as utopia or as some forgotten midwestern town or as Abyssinia? Where and when is the world of unmediated creativity? If it can exist, it does exist — but perhaps only as a sort of alternate reality which we so far have not learned to perceive. Where would we look for the seeds — the weeds cracking through our sidewalks — from this other world into our world? the clues, the right directions for searching? a finger pointing at the moon?

I believe, or would at least like to propose, that the only solution to the “suppression and realization” of Art lies in the emergence of the TAZ. I would strongly reject the criticism that the TAZ itself is “nothing but” a work of art, although it may have some of the trappings. I do suggest that the TAZ is the only possible “time” and “place” for art to happen for the sheer pleasure of creative play, and as an actual contribution to the forces which allow the TAZ to cohere and manifest.

Art in the World of Art has become a commodity; but deeper than that lies the problem of re-presentation itself, and the refusal of all mediation. In the TAZ art as a commodity will simply become impossible; it will instead be a condition of life. Mediation is harder to overcome, but the removal of all barriers between artists and “users” of art will tend toward a condition in which (as A.K. Coomaraswamy described it) “the artist is not a special sort of person, but every person is a special sort of artist.”

In sum: disappearance is not necessarily a “catastrophe” — except in the mathematical sense of “a sudden topological change.” All the positive gestures sketched here seem to involve various degrees of invisibility rather than traditional revolutionary confrontation. The “New Left” never really believed in its own existence till it saw itself on the Evening News. The New Autonomy, by contrast, will either infiltrate the media and subvert “it” from within — or else never be “seen” at all. The TAZ exists not only beyond Control but also beyond definition, beyond gazing and naming as acts of enslaving, beyond the understanding of the State, beyond the State’s ability to see. 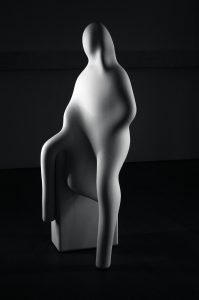