the future is everywhere

the renowned italian philosopher emanuele coccia is a regular contributor to purple.

We’ve lost our history.We’ve lost our planet. We don’t have time anymore. We won’t have space anymore. For this very reason, we are pure future. We’ve lost every kind of identity. That’s why we are a future that exists beyond time, beyond technological progress, and beyond the identity of any species.

We cannot imagine our future starting from a shared past. The past is no longer available. It is not so much or not only for political reasons: it is not because the joyful memory of some coincides with the tragedy of others. It is not even because it is difficult to reconcile memory or to build a common memory. Memory — the history of events and the heritage of knowledge — is useless because it refers to a planet that is no longer the same, a reality that doesn’t exist anymore. Climate change is not just an accidental modification of the surface of the Earth. It is a different breath, the metamorphosis of its flesh, and the emergence of a new physiology. This is, above all, the evidence that our planet has no nature, has nothing stable, and is not intended by nature to host our life or the life of other living things. It was not created for us. It does not guarantee any eternity.

The past has not just become useless. It has become impossible. What we call digital platforms are not just secondary accessories for faster transmission of information. They are machines that allow any knowledge to exist only as long as it is transmitted and can circulate. They are not virtual libraries: they are the exact opposite of an archive. Nothing remains, everything must circulate, everything disappears as soon as it stops circulating. To know means only to transmit. In this context, the construction of memory, the crystallization of memories and knowledge in a common past is literally impossible. Experiences are now valid to the extent that they are immediately shared, and produce a present and not a past. Culture in the traditional sense has become impossible. There is only an endless conversation, which changes its objects as easily as it replaces and replaces the subjects who converse. The future has lost every idea of culture.

Not only are ideas, knowledge, and information circulating, but — also and above all — so are people. That’s why it’s not just cultures: it’s also people who have become impossible. The intensification of trade, migration, and the circulation of ideas and products caused by globalization has made the planetary human community a protean entity that is constantly changing face and place. It is impossible to assign to any part of this community a culture, an identity radically and definitively distinct from another. It is impossible to assign a territory to a culture in a stable way.

Humanity can no longer divide itself into peoples and can no longer know itself under the form of a culture. It is the place of a continuous mixing of identities, the reality of a conversation that consumes all cultures. The future has lost all the faces of its peoples: we are now only pure humanity, without any other determination.

Space has also disappeared. For centuries, we have thought of the reality of our world in geometric terms. There was a non-matter, an extended vessel called space, capable of allowing anything to exist and accommodating all other bodies. This non-matter was what gave any body its measure: together a size, a silhouette, and also a comparability to any other body… Space was not only a metric dimension, but it was also, each time, linked to a coordinate of the planet. Space was immediately territory, topography, the drawing of a place on the surface of the Earth. Geometry has disappeared today. What we call phones are devices that make space superfluous and territory an abstraction. We are everywhere, with a presence that goes beyond any metric dimension. The future of our presence can no longer be measured spatially; it can no longer be measured on a territorial plane. Every human being occupies and lives virtually on the whole planet. Humanity has no dimensions and no longer lives spatially.

Humanity no longer even lives within the confines of an identified biological face. The change of the planet is not just a change in decorum, a change in external temperature. It is a change in the distribution of the planet’s flesh in the different forms that inhabit it. We have thought for centuries that we were an autonomous body and form, different from other bodies and forms in nature but also in power. None of the other forms had the same power as us; none could obscure our dominance. All it took was the smallest portion of animate matter, a virus, to challenge this feeling of omnipotence. But with the illusion of wielding power, we lost the illusion of form. Humanity is not a form among forms: it is a mixture of traits that belong to infinite forms. Species are not substances: each being summarizes and expresses the life and the flesh of the whole planet. Each of them expresses an eternal perspective on the planet: a way that the planet has invented to relate to itself, to observe itself and feel observed, to have a privileged relationship with a part of itself. This is why each species designs the future of the whole planet and never of itself.

The future is not an evolution of this or that identity, nor is it in the respect of identities. The future is in the capacity of each identity to include and become any other, to forget itself and live without remembering its own name. Tomorrow is the unity of the breath of all selves. 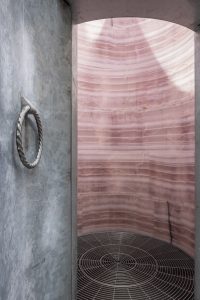 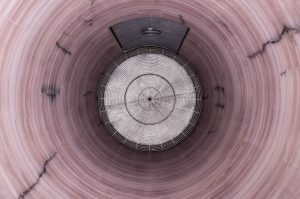 CYPRIEN GAILLARD, FRANKFURTER SCHACHT (FRANKFURT SHAFT). Situated on the edge of the Wallanlagen green belt in Frankfurt — the former rampart that used to separate the city center from its outlying districts — a gray ventilation shaft stands among the various monuments between the financial and red-light districts, totally integrated into the urban landscape. The shaft is accessible to all, day and night: you only have to push the door. It offers a beautiful place of intimacy, silence, and isolation. The shaft closes from the inside if needed. Surrounded and protected by pink, and in the gentle flow of air and water, the view opens into the sky. The idea at its core is its free accessibility and individual utilization. Cyprien Gaillard returned to the site over a period of two years and created this public sculpture, Frankfurt Shaft, which neither pays homage nor commemorates, neither extols nor warns, but simply serves.  — SUSANNE PFEFFER