the mexican artist and fashion designer created a project for purple future, titled body fillers and plastified diets: undressing our bodies to nourish our future — a case study on the plastification of our bodies and the fight for water.

The steam from the hot springs indicated to the Purépecha, the native inhabitants of Michoacán, the presence of Kwerawáperi, the goddess of rain and consequently of life. Sacrificial hearts were placed in these springs to announce to the deity a lack of rain.

Human hunger extended from stomachs to the empire; on top of the taming of plants and animals, water has been channeled to subdue its fluctuating nature. Great lakes and rivers that indicated the promised land of Tenochtitlán were tubbed underground, replaced by four-lane roads: the realm of the underworld was replaced by a sewage system.

Under human rule, Mictlán was transformed into a labyrinth of pipes, throwing us into today’s Anthropocene. Deceived by capital and the desire for material accumulation, we have offered our cavities to waste. Because of our biological nature, mutation was inevitable. In Mexico, only 37% of contaminated water is purified, and the rest is basically re-ingested, providing us with the fecal diet that places diarrhea as the most common intestinal condition in the country, with an estimated 5,521 cases per 100,000 inhabitants.

Then there’s the plasticized diet: we ingest microplastics through seafood and vegetables, but above all from water. The University of Newcastle in Australia estimates that we consume five grams of plastic — approximately one credit card — per week. It was only a matter of time before our bodies mimicked the urban landscape we have designed for generations.

The extraction of these protrusions welcomes us to a world in which we depend on the infertility of plastic. We went from offering hearts to offering buckets. We have been transformed into injection molds that fulfill the obscure need for the transportation, collection, and accumulation of vital liquids. Of the petrichor, there remains only a memory in which, lost in the labyrinth, we give ourselves to the holy water to get away from hell. In reality, these subterranean roads are meant for getting lost, not being found. 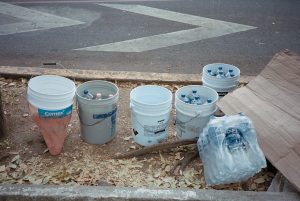 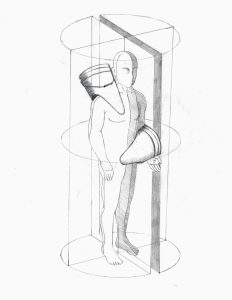