We are now governed not so much by growth as by growths. Ours is a society founded on proliferation, on growth which continues even though it cannot be measured against any clear goals. An excrescential society whose development is uncontrollable, occurring without regard for self-definition, where the accumulation of effects goes hand in hand with the disappearance of causes. The upshot is gross systemic congestion and malfunction caused by hypertelia — by an excess of functional imperatives, by a sort of saturation. There is no better analogy here than the metastatic process in cancer: a loss of the body’s organic ground rules such that a given group of cells is able to deploy its incoercible and murderous vitality, to defy genetic programming and to proliferate endlessly.

This process is not a critical one: crisis is always a matter of causality, of an imbalance between cause and effect to which a solution will be found (or not) by attending to causes. In our case, by contrast, it is the causes themselves that are tending to disappear, tending to become indecipherable, and giving way to an intensification of processes operating in a void.

So long as there is a dysfunction in a system, a departure from known laws governing its operation, there is always the prospect of transcending the problem. But when a system rides roughshod over its own basic assumptions, supersedes its own ends, so that no remedy can be found, then we are contemplating not crisis but catastrophe. Deficiency is never a complete disaster, but saturation is fatal, for it produces a sort of tetanized inertia.

The striking thing about all present-day systems is their bloatedness: the means we have devised for handling data — communication, record-keeping, storage, production and destruction — are all in a condition of “demonic pregnancy” (to borrow Susan Sontag’s description of cancer). So lethargic are they, indeed, that they will assuredly never again serve a useful purpose. It is not we that have put an end to use-value — rather, the system itself has eliminated it through surplus production. So many things have been produced and accumulated that they can never possibly all be put to use (certainly not a bad thing in the case of nuclear weapons). So many messages and signals are produced and disseminated that they can never possibly all be read. A good thing for us too — for even with the tiny portion that we do manage to absorb, we are in a state of permanent electrocution.

There is something particularly nauseating about this prodigious uselessness, about a proliferating yet hypertrophied world which cannot give birth to anything. So many reports, archives, documents — and not a single idea generated; so many plans, programmes, decisions — and not a single event precipitated; so many sophisticated weapons produced — and no war declared!

This saturation goes way beyond the surplus that Georges Bataille spoke of; all societies have found some way to dispose of that through useless or sumptuous expense. There is no possible way for us to spend all that has been accumulated — all we have in prospect is a slow or brutal decompensation, with each factor of acceleration serving to create inertia, bringing us closer to absolute inertia. What we call crisis is in fact a foreshadowing of this absolute inertia.

We confront a paradoxical process, then, whose duality — tetanization and inertia, acceleration in a void, overheated production with no attendant social gains or aims — is a reflection of the two phenomena conventionally attributed to the crisis: inflation and unemployment.

Traditionally, inflation and unemployment are variables in the equation of growth. At this level, however, there is really no question of crisis: these phenomena are anomic in character, and anomie is merely the shadow cast by an organic solidarity. What is worrying, by contrast, is anomaly. The anomalous is not a clear symptom but, rather, a strange sign of failure, of the infraction of a rule which is secret — or which, at any rate, we know nothing about. Perhaps an excess of goals is the culprit — we simply do not know. Something escapes us, and we are escaping from ourselves, or losing ourselves, as part of an irreversible process; we have now passed some point of no return, the point where the contradictoriness of things ended, and we find ourselves, still alive, in a universe of non-contradiction, of enthusiasm, of ecstasy — of stupor in the face of a process which, for all its irreversibility, is bereft of meaning.

There is something much more shattering than inflation, however, and that is the mass of floating money whirling about the Earth in an orbital rondo. Money is now the only genuine artificial satellite. A pure artifact, it enjoys a truly astral mobility; and it is instantaneously convertible. Money has now found its proper place, a place far more wondrous than the stock exchange: the orbit in which it rises and sets like some artificial sun.

Unemployment, too, has taken on new meaning. It is no longer a strategy of capital (the reserve army of labour). It is no longer a critical factor in the play of social relationships — if it were, since the danger level was passed long ago, it would necessarily have sparked unprecedented upheavals. What is unemployment today? It too is a sort of artificial satellite, a satellite of inertia, a mass with a charge of electricity that cannot even be described as a negative charge, for it is static: I refer to that increasingly large portion of society that is deep-frozen. Beneath the accelerating pace of the circuits and systems of exchange, beneath all the frenzied activity, there is something in us — in each of us — that slows down to the point where it fades out of circulation. This is the inertia point around which the whole of society eventually begins to gravitate. It is as though the two poles of our world had been brought into contact, short-circuiting in such a way that they simultaneously hyperstimulate and enervate potential energies. This is no longer a crisis, but a fatal development — a catastrophe in slow motion.

Not the least of paradoxes, given this context, is to see the economy returning triumphantly to the agenda — though whether we can properly speak of “economy” here is questionable. Certainly this glaring reality of today cannot have the meaning it had in the classical or Marxist accounts. Its motor is neither the infrastructure nor the superstructure of material production, but rather the destructuring of value, the destabilization of real markets and economies and the victory of an economy unencumbered by ideologies, by social science, by history — an economy freed from ‘Economics’ and given over to pure speculation; a virtual economy emancipated from real economies (not emancipated in reality, of course: we are talking about virtuality — but that is the point, too: today, power lies not in the real but in the virtual); and an economy which is viral, and which thus connects with all other viral processes. If the economic sphere has once more become an exemplary theatre of our present reality, it has done so as the locus of special effects, of unforeseeable events, of an irrational interplay of forces.

Along with Marx, we too dreamt of the end of Political Economy — of the abolition of classes and the advent of a transparent social realm in accordance with the ineluctable logic of Capital. And then we dreamt of the end of the economy in terms of a disavowal of its basic tenets — a disavowal that threw out the Marxist critique into the bargain: on this view, primacy was accorded neither to the economic nor to the political — the economy was simply ushered out as a mere epiphenomenon, vanquished by its simulacrum of itself, and by a superior logic.

Today we no longer even need to dream: Political Economy is coming to an end before our eyes, metamorphosing into a transeconomics of speculation which merely plays at obeying the old logic (the law of value, the laws of the market, production, surplus-value, all the classical laws of capital) and therefore no longer has anything economic or political about it. A game and nothing but a game, with floating and arbitrary rules: a game of catastrophe.

So Political Economy will indeed soon have come to an end — though not at all in the way we once envisaged: rather, through the exacerbation of its own logic to the point of self-parody.

Speculation is not surplus-value, it is a sort of ecstasy of value, utterly detached from production and its real conditions: a pure, empty form, the purged form of value operating on nothing but its own revolving motion, its own orbital circulation. The self-destabilization of Political Economy is thus what puts paid, in monstrous and somehow ironic fashion, to all possible alternatives. What possible riposte could there be to such extravagance, which effectively co-opts the energy of poker, of potlatch, of the “accursed share”, and in a way opens the door to Political Economy’s aesthetic and delusional stage? This unexpected demise, this phase transition, this wild bull market, is fundamentally far more original than all our old political utopias.

an excerpt from the transparency of evil: essays on extreme phenomena, translated by james benedict, published by verso, london, 1993 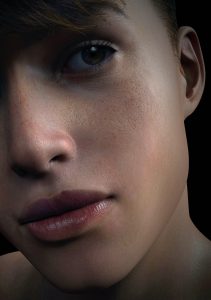 AVATAR, 2021, 3D TEXTURES BY COTERIE VIRTUAL, COURTESY OF THE ARTIST