charlotte gainsbourg participated in her first experimental electronic album with stephan crasneanscki from soundwalk collective, along with paul b. preciado, atom™, lyra pramuk, and willem dafoe.

this immersive musical project imagines the future of sexuality in the age of artificial intelligence, exploring the mutation of love among humans and cybernetic entities.

OLIVIER ZAHM — Tell us about the experience of recording your Lovotic album with Soundwalk.
CHARLOTTE GAINSBOURG — It was in New York. I said to Stephan Crasneanscki from Soundwalk Collective that I would like to do a new album or a musical project with him on sexuality. And one day, Stephan came up with an idea for the lyrics: cutting up pages of his books on sex and sexology and rearranging the sentences, in the style of William S. Burroughs. He started to do it, and I loved the result. The whole idea of putting together random sentences about sexuality and making a story for each song was a very creative process, full of accidents and surprises. What’s incredible with Stephan is that he takes me into this artistic world that I’m not so familiar with — the world of contemporary art. So, it was a step into a new concept of work for me. And the fact that it was not really about me singing but more about mon timbre, my speaking voice — that’s what attracted me at first.

OLIVIER ZAHM — How did you record it?
CHARLOTTE GAINSBOURG — We were in New York, already recording at the Electric Lady Studios, when I received an alert from The New York Times on my phone saying that in 24 hours, all flights to Europe will be shutting down. I can clearly remember recording “The Future of Sexuality,” and at the same time, all the possibilities were closing up in front of me. In the next 24 hours, Stephan decided to go back to Europe and transfer his studio to Ibiza, and I decided to stay in New York. I was completely isolated at home, [taking care of the homeschooling] for my kids. Stephan said: “Go to my studio, it’s empty — just take your time, and we will continue the recording remotely. If you also want to write, if you want to meditate, to read, or whatever, take the key and go.” So, it was a sort of ritual. Every day, once I had done the school teaching and all of that, I would take three hours in the day to go to his studio, read, work, and then work on the album. Stephan had someone who could bring me a super mic, something really perfectionné.

OLIVIER ZAHM — How was it recording all alone in a studio in NYC? Was it very experimental?
CHARLOTTE GAINSBOURG — Completely experimental! Stephan asked me to record a few pages of his sex cut-ups. He gave me the sounds and music, which was very atmospheric. I could understand how the voice could work, just as a voiceover. I was recording my voice by myself, and then I would send it to Stephan, who would edit and mix it overnight and send it back to me to do overdubs and melodies on it. I was just supposed to be very free and play with this sexual textual material. And then he would come back and say: “Well, can you record a bit more of this, or can you try and sing this? Do a take of you singing it.” So, I would just go into these weird melodies…

OLIVIER ZAHM — That came to you?
CHARLOTTE GAINSBOURG — Yeah, but it was sort of nothing, very fragile. My first take was in the most neutral way, more like AI, and then Stephan would ask me to layer fragile melodies on it. It’s more about my voice, my way of saying words. And he was always so excited about the surprise of getting these recordings back to me and of having the surprise of new words and sentences to play with. It was just a very new kind of exchange…

OLIVIER ZAHM — What kind of exchange?
CHARLOTTE GAINSBOURG — When it comes to sexual words, crude words, I have no problem. I remember when I did a film called Merci la Vie, with the French director Bertrand Blier — it was his words, and they were very crude, and I remember him asking: “Do you have a problem with saying crude words?” And I said: “No, I don’t. Why would I have a problem?” I never thought it was obscene… Moi j’ai pas peur des mots en fait [I’m not afraid of words].

OLIVIER ZAHM — And did you have to get into character to interpret those lines and sentences about sex?
CHARLOTTE GAINSBOURG — No, it was a little bit going into myself. The only criticism I have, having done it, is that the “I” is maybe a little too much into myself. A little bercée par ma propre voix [lulled by my own voice]. It was a bit self-indulgent, in that sense. You know what I mean? It maybe lacked modesty because I was sort of on a space journey with my own voice.

OLIVIER ZAHM — Yes. In this album, you’re like the last feminine creature on earth.
CHARLOTTE GAINSBOURG — Yeah… And I loved this futuristic idea that I could never have. The robotic aspect, too.

OLIVIER ZAHM — There’s a meditative aspect to the Lovotic sex songs, don’t you think?
CHARLOTTE GAINSBOURG — Yes, it’s a trip. I feel that it’s a different musical experience. Especially because of the way those songs combine words and electronic music.

OLIVIER ZAHM — And questioning what’s possible in terms of relationships and love.
CHARLOTTE GAINSBOURG — Of course. It was the best time to question that, while we have to deal with all this physical forbidden stuff and social restrictions.

OLIVIER ZAHM — We’re living in a sci-fi dystopian movie. “Visit the future, where love is the ultimate crime” was the tagline of George Lucas’s fascinating debut feature, THX 1138, in 1971…
CHARLOTTE GAINSBOURG — How could we ever have imagined that we would all have to stay away from people? In the streets, in restaurants, children at school, everywhere… We don’t know what the next step will be…

OLIVIER ZAHM — Going back to the song “The Future of Sexuality,” how do you see things evolving? Will they become more and more digital? Do you think we’ll be able to love machines? Sex in the metaverse?
CHARLOTTE GAINSBOURG — I very much live in the past. And already it’s a stretch for me to try and be more present [laughs]. But to speak about this song, it’s about how AI will offer new possibilities to expend the possibilities of sexuality and human love.

OLIVIER ZAHM — We all have to jump into the future and develop different ways of interacting and loving each other.
CHARLOTTE GAINSBOURG — To me, jumping into the future is not so exciting… I don’t want to believe that a totally disembodied future is going to happen. I prefer being very naive and thinking that we’ll come back to something physical and that we won’t stop exchanging with each other in physical reality.

OLIVIER ZAHM — Sexuality is changing, though, right?
CHARLOTTE GAINSBOURG — I’ve been with the same man for 30 years, so…

OLIVIER ZAHM — You’ve never played the classic feminine seduction game.
CHARLOTTE GAINSBOURG — Yeah, but because I didn’t have the tools.

OLIVIER ZAHM — [Laughs] You? Come on…
CHARLOTTE GAINSBOURG — No. I think if I had… If I was born with big boobs and a super sensual body of a woman, I would have felt like a woman. I’ve never felt like a woman. First, I went from a kid to a teenager with shapes when my father died. So, it was a difficult moment for me. My mother was not like that. She didn’t have boobs, but she had hips, and she was incredibly feminine. Much more than me! So, I had to play another game of being more like a boy.

OLIVIER ZAHM — So, you always had a nonbinary identity and style, playing a very different kind of seduction game. It’s actually how sexuality is changing today.
CHARLOTTE GAINSBOURG — Yeah, you’re right. But it’s a bit sad that I didn’t take advantage of my body younger, when I could have — because secretly I was always aspiring to be more seductive in a classical way. But maybe that’s also part of the charm: that I wasn’t aware of anything.

OLIVIER ZAHM — With Lars, you had to go to such extreme sexual situations.
CHARLOTTE GAINSBOURG — Thanks to him. Psychological, sexual, emotional situations. It was a little bit perverse sometimes, but I like that. He sort of puts you in a difficult spot sometimes, but he was always very sweet with me, so there was never a violent moment. Then there’s a whole limit that you set.

OLIVIER ZAHM — You set your own boundaries.
CHARLOTTE GAINSBOURG — Yeah. And there was my physical limit. But I don’t really believe in freedom today. I don’t have the impression we are in this total freedom of doing whatever we want… I feel people are completely scared. We’re closing ourselves…

OLIVIER ZAHM — In a sort of sexual regression?
CHARLOTTE GAINSBOURG — Yes. I feel that we live in fear now of being destroyed or canceled. The ability of social media to just erase someone or accuse them and destroy his or her life is incredible.

OLIVIER ZAHM — So, it creates a sort of frustration, tension, a weird situation where people are like, “Can I go there or not?” We now even have these contracts that we sign prior to a relationship where you say, “I accept this, I accept that.”
CHARLOTTE GAINSBOURG — But what was reassuring for me is that when I see my kids, they look for a true relationship. And, in fact, they go along, and they do experience all the emotions of a love relationship. Maybe it’s not exactly the same as what we had at their age, but it’s still innocent. Maybe four or five years ago, I was thinking, “My poor kids — how will they experience a true love story?” Oui, il y a quand même [Yes, there is still] love and, you know, feelings and kissing and all that. It’s still there. 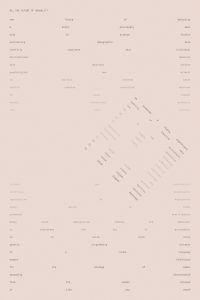 LYRICS OF “THE FUTURE OF SEXUALITY” BY STEPHAN CRASNEANSCKI IN LOVOTIC, SOUNDWALK COLLECTIVE 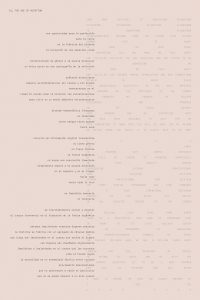 LYRICS OF “THE AGE OF MUTATION” BY PAUL B. PRECIADO, IN LOVOTIC, SOUNDWALK COLLECTIVE 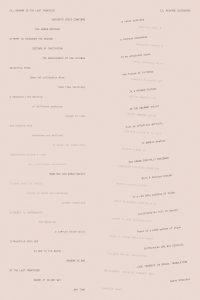 LYRICS OF “ORGASM IS THE LAST FRONTIER” BY STEPHAN CRASNEANSCKI IN LOVOTIC, SOUNDWALK COLLECTIVE