text by PAUL B. PRECIADO

Report on the Earth Archive: Department of Cosmic Archaeology — Center for Planetary Semio-History

Institute of Electromagnetic Restoration of Analog and Proto-digital Languages

Material data of the findings:

1. Fragments of polyvinyl chloride. Remnants of nickel and aluminum.

2. Fragments of semichemical pulp paper made from a mixture of cellulose fiber and alkaline carbonate solution. Technology used for the inscription of a human language based on visual traces. Grammage of 90 g/m2. Medium roughness. Matte tonality. Colored inks produced by long, medium, and short waves corresponding to the capture of a human animal optic nerve; dichloropane solvent, highly toxic excipients. Bacterial and viral residues.

Consultation in laboratory with high levels of biosafety is recommended.

Reconstruction of the vinyl fragments allows decoding of a sound message emitted by five human animal voices in several terrestrial vernacular languages — specifically detectable are Spanish and English. The fragmentary character does not allow a complete retranscription of the message.

The fragments of printed cellulose paste could contain a reinscription of the vocal messages encrypted in the grooves of the polyvinyl chloride, so that through the accumulation of remains and fragments, we can elaborate a series of hypotheses about their semiotic messages. Both inscription technologies (sound and written) could contain a message sent by a collective of terrestrial animals (of at least five, although possibly other humans were involved in the manufacture of the analogical technique that allowed the recording of the voices, as well as their distribution in the form of writing) to other humans or even to nonhuman inhabitants of the cosmos. The size of the letters and cellulose fragments indicate that it was primarily intended for inter-human communication, although the vinyl fragments suggest that it may have been a pirated and politically dissident version of the Golden (gilded copper) disc The Sounds of Earth found on the Voyager space probe in 1977.

Therefore, we do not advocate only one possible outcome: the message could refer to the changes in affective and sexual human practices that occurred with the emergence of artificial intelligence and cybernetics (Love/Robotic); or refer to an epidemic caused by the development of trans-species love practices (Love/Enzootic), or to the development of new affective practices through symbiotic agency (Love/Symbiotic), or to the influence that chemical substances and synthetic psychotropics (from the contraceptive pill to the intentional use of hormones for gender reassignment, to the industrial production of C22H30N6O4S, better known as Viagra, or the use of methylenedioxymethamphetamine and other erotic affect-enhancing molecules) had on the gender and sexual transformations of humans in late capitalism (Love/Narcotic). Many other eventual combinations are possible.

Taken as a whole, we infer that it is a message that accounts for a process of social and political mutation that took place in human animal cultures at the end of industrial modernity, at the height of the terrestrial destruction resulting from the combustion of fossil fuels and the overproduction of plastics. The papers speak of the transition from a binary sexual and reproductive technology (the binary and heterosexual male-female coupling that was given priority in the Voyager messages), to a more open love technology in which human animals could behave as pansexual viviparous androgynous animals connected to first-generation cybernetic technologies (primitive Internet by submarine connections and satellites).

We believe that the documents found correspond to the moment of ecological-political collapse of the heterosexual and patriarchal-colonial regime, a regime characterized by strong asymmetries between bodies with uterine capacity and bodies producing liquids containing reproductive cells and which had given rise to the planetary expansion of structural violence, as well as by the energetic and reproductive privilege of light-skinned bodies known as Caucasian or white. The central presence of a voice emitting at an average of 220 Hz (and which, in binary human societies, would have been qualified as female, could be that of the human animal known as “Charlotte Gainsbourg” — several sound and moving image documents available — see Archival records) and of a voice neither male nor female (which could be that of the mutant human writer Paul B. Preciado, author of several works that have either not been preserved or have been destroyed) seems to suggest that social and political mutation at stake especially concerns the possibility for bodies considered as feminine and trans to appropriate the technologies of social and sexual production and reproduction to introduce intentional anti-system drifts.

Since they were probably produced at a time of mutation, the documents seem to explore new experimental practices in which human animals distance themselves from the bondage imposed by the imperatives of sexual reproduction, gender binarism, and racial domination through social, semiotic, and prosthetic experimentation, in which both new substances and cybernetic entities, as well as new alliances between nonhierarchical human animal bodies, were implicated. 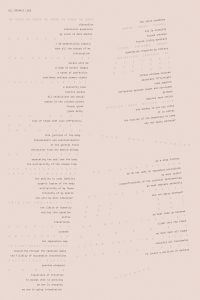 LYRICS OF “PRIMATE LOVE” BY PAUL B. PRECIADO FROM LOVOTIC, SOUNDWALK COLLECTIVE