the french artist philippe parreno is a long-time fan of rené daumal’s mount analogue. he transposed each word of the unfinished novel into a blinking light code, attributing a color to each word and sending the story into the sky from atop the medici column in paris.

BORIS BERGMANN — How did you come across the novel Mount Analogue?

PHILIPPE PARRENO — It was at the Beaux Arts in Grenoble. It began, not with an unknown text, as in Mount Analogue, but with the voice of a friend: “Have you read Daumal? You should.” I started with A Night of Serious Drinking, then Mount Analogue.

BORIS BERGMANN — That inspired you to make a work, Mount Analogue [Mont Analogue in French], which was presented at the Air de Paris gallery in 2001.
PHILIPPE PARRENO — Even before I made an artwork, Mount Analogue taught me a certain idea of the collective, which is characteristic of avant-garde experiments, but it’s even more rigorous, even more experiential in Daumal’s text. The idea is quite strange: there only needs to be two or three of you to imagine an object. And that object doesn’t need to exist in reality. It is enough for it to be thought of for it to become as real as reality. A form exists if it is exchanged. It becomes real if several of us see it. And so, the moment it is shared, a virtual object competes with the real. If I close my eyes, the object continues to exist outside me, in another person’s mind. This key idea made me want to create with other people, collectively; that’s the first leitmotif in my work — there were 20 years when I was constantly collaborating, intensively, before I made art on my own. That’s how Daumal’s legacy worked in me.

BORIS BERGMANN — Has Mount Analogue remained active in you?
PHILIPPE PARRENO — I even tried to make a film of it. I wanted to go on an expedition and film it. To take the text as a map, a road map. To follow it to the letter. I’d found a boat and a skipper, started to imagine the route to take through those complicated waters, asked Gallimard for the rights. And started to invite artists and scientists to go with me. The film would be the common result, the set of creations made during the journey, what each person had been able to produce around that quest. So, my work Mount Analogue would become a collective form. And the film would be its accomplished realization. But the expedition didn’t happen. Which is fine. An unlived adventure exists in spite of it all. And I kept the process for other expeditions, like my 1997 show “Postman Time,” in which I invited radically different artists to produce shared forms together.

BORIS BERGMANN — You didn’t stop there.
PHILIPPE PARRENO — I adapted Mount Analogue in color, which I then encoded with Morse code. I projected the sequences using a video projector without a lens, which put out nothing but light. I showed it in my first exhibition at the Musée d’Art Moderne de Paris. At night, on Avenue du Président Wilson, there was this kind of constant little glow, as if someone on the other side of the window was looking at a screen. Anyone walking past would have seen the light of a film that never took place, a film that was never shot. Later, I projected the work onto a screen, as in Berlin. I was really struck by the result. It is quite long, but people stayed in the room: they were ready to be dazzled, to succumb to a kind of hallucination.

BORIS BERGMANN — Mount Analogue was also part of your installation at the Bourse de Commerce, which is home to the Pinault Collection.
PHILIPPE PARRENO — As often in my work, I like to go back over themes. At the Bourse de Commerce, I wanted to keep that transposition of Mount Analogue into light. I created a special lightbulb, a combination of LEDs that can produce an infinite number of colors. There are over 5,000 words in Mount Analogue. I paired each word with a color. The bulb was placed right at the top of the tower, between Fresnel lenses. Daumal’s text became a glow in the Paris sky at the top of an impromptu lighthouse. It flickered like a new star, a new North Star waiting to be detected. In fact, the tower outside the Bourse de Commerce is called the Medici Column because it was created by Catherine de’ Medici who liked to go up there with Nostradamus to observe the sky. So, it’s a link between Earth and sky, an ideal passage for inscribing Mount Analogue.

BORIS BERGMANN — It could be said that Mount Analogue never left you…
PHILIPPE PARRENO — It’s a text that I live with. That kind of attachment is pretty rare. For one thing, it’s a coming-of-age novel, to be read when you’re young. And then it’s a real utopia: at the end of the ascent, there is no need for words, no need for language to commune together, to create together. I can see why the Beats loved this text. They saw language as a barrier, something that resists and denies us access to truth, which you therefore have to reach by other paths, like drugs. It’s like Alfred Korzybski’s remark, “The map is not the territory.” He invented a grammar of general semantics in order to do without words and access the world as it actually is. An idea that Philip K. Dick took up in a darker mood. It’s the same with Daumal: the ascent of Mount Analogue becomes a kind of post-symbolic communication, a quest going beyond our usual forms of experience.

BORIS BERGMANN — Does Mount Analogue need to remain incomplete?
PHILIPPE PARRENO — Even today, I still want to make that film, to go on the expedition, to go all the way with the collective experience. But incompleteness is also part of the myth surrounding the text. It reassures us: the most interesting form is one that is not finished. We don’t need to finish something for it to exist. On the contrary, that incompleteness means it can go on developing in the imagination. Mount Analogue doesn’t need the words “The End.” 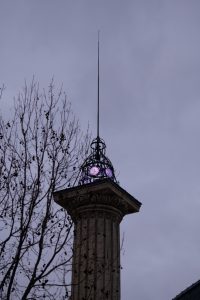 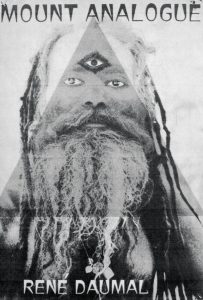