telfar by olivier zahm and torso of this

OLIVIER ZAHM — It’s fantastic to have you in Paris. We need your energy here. You started Telfar in 2006, right?
TELFAR CLEMENS — I’ve been doing my line since I was 15. I’ve never had another job, really. In high school, I was like, “I’ll cut some jeans and make some money.” The brand began in 2004 officially. I started making two collections a year and showing on the New York Fashion Week schedule.

OLIVIER ZAHM — How has the fashion world changed since then?
TELFAR CLEMENS — It’s changed so much. It went through the recession, the Internet phase, and fast fashion coming in, in big and small stores. I basically survived thanks to a community of people who buy things from me directly.

OLIVIER ZAHM — At what stage did it become professional and start to go beyond just the people around you?
TELFAR CLEMENS — About seven years ago. I started to do retail, and stores began to buy stuff. It hasn’t been easy — it’s been an uphill battle! I make a unisex line, and they don’t know whether to put it with men’s or women’s. So, that’s always been a thing. People didn’t buy stuff for a really long time and also just tried to shape it into this way that would fit into the fashion industry.

OLIVIER ZAHM — You were one of the first with this new approach to fashion.
TELFAR CLEMENS — There wasn’t another unisex line when I started. And I specifically did that because my feeling for clothes is… I wear anything and everything, and if it looks good on you, it looks good on you, regardless of gender. And sometimes it looks better on the other gender. And that’s just what my eye catches. I didn’t want to be limited by gender. And it was also a thing for me growing up: I always wanted a Calvin Klein baby tee, and a shirt that said “Bitch” with a fucking crop top, but I wasn’t allowed to get it because it was in the women’s section. If it had been in the men’s section, my mom would’ve been like, “Okay, cool, that’s a man’s shirt.” Designers like Jean Paul Gaultier — when it was Gaultier men’s, and the shirt was just like [gestures] that big and the nipples out, or whatever. That’s what
I wanted to buy! When I was growing up, I’d go shopping and look at Vivienne Westwood, International Male [a mail-order clothing brand].

OLIVIER ZAHM — Do you feel as though you’re part of a new movement in fashion now?
TELFAR CLEMENS — I’m glad that I’m part of it, but I’m not really trying to be part of anything. I’m more into utility than something being fashionable.

OLIVIER ZAHM — And you’re not into imposing your own ego or your own name, right?
TELFAR CLEMENS — No, I’m really egotistical. I want to wear it first, I want to do it first.

OLIVIER ZAHM — But I get the sense that you have a community of people around you, and that you work in a very collective way.
TELFAR CLEMENS — Yeah, but for years I worked on the brand alone. I’d do everything because it’s just the type of person I am. And also, no one’s going to be along for that ride, and you just keep [gesticulates like he’s cracking a whip], and you can’t pay them. And it was my friends: they believed in it, too. And they did this just out of their belief that this is actually the next cool thing and just wanting to do something cool. But that’s how the community was built. That person was actually there on their own time, for free, for five years.

OLIVIER ZAHM — But how do you create this community around you?
TELFAR CLEMENS — Well, it’s not because I have money. [Laughs]

SAVANNAH NOLAN — Where’d you find your community?
TELFAR CLEMENS — I met most of my friends on the street. You’re walking around and bump into someone and have a good conversation with them. All of my friends who have successful careers, they were just being themselves, and we got along.
I want to work with the person I’ve known for 10 years — I don’t want to meet new people. It’s like, “I trust you because I’ve known you for 15 years, and I know what you can do,” you know? Not like, “I just met you yesterday, and you’re like the hot shit.”

OLIVIER ZAHM — Maybe it’s also because you use fashion in a different way than previous designers, in the sense that you have a political message, too. So, maybe people around you can identify with your ideas?
BABAK RADBOY — It’s not a message.
TELFAR CLEMENS — It’s not a political message. It’s just our personality.
BABAK RADBOY — It’s a fact, an embodied fact. So, this is the thing that annoys us a bit with the press that comes after the shows. They say that we have an inclusive runway, which doesn’t make sense — it wasn’t inclusive, it was continuous. But this idea is unfathomable to the press.

OLIVIER ZAHM — For my generation, people used to express themselves more with music than with fashion because fashion was expensive. You couldn’t create a label just like that.
TELFAR CLEMENS — Well, that’s the thing I wanted to be different about my brand. Most of the cool people don’t have money. [Laughs] If you’re actually cool and want that weird shirt, it’s not expensive. The average person can afford to look good or bad — as bad as you want to look.
BABAK RADBOY — We’ll set a price based on how much a DJ can make in a night.

OLIVIER ZAHM — I didn’t see any of your previous shows — this was my first one. It was so powerful! How do you come up with the shows?
TELFAR CLEMENS — I want it to feel like you’re getting an experience that you’re not going to get anywhere else. And I don’t even want you to see it online. You go to the show, otherwise, it’s like…

OLIVIER ZAHM — So, to speak about migrants and migration, you yourself have experienced this, right?
TELFAR CLEMENS — Nah, I’m American, actually. I’m an anchor baby. My parents had me in the US so I got citizenship there, and then we went back to Liberia. And then a war happened there, so I moved back to America. I’ve been here since I was five because Liberia’s been at war for 20-something years.

OLIVIER ZAHM — The video is a metaphor for this?
TELFAR CLEMENS — A little bit.
BABAK RADBOY — For both of us — because I’m from Iran and came to America during the revolution. The reason we get a little uncomfortable… We had a lot of press from the show, but all the press makes me cringe because the kind of default understanding is that migration is the subject of our show. But we’re the subjects. We’re not censoring ourselves to not show those videos. But they’re not a motif. We didn’t want to advocate for immigrants and migration. We want to confuse the word “immigrant.” What does “migrant” mean? Is migrant when you listen to music? Is migrant when you move from one place to another? Where does someone have the right to live? Do any of us really have the right to live where we have to pay so much rent?

OLIVIER ZAHM — It means that fashion doesn’t have an origin or source. It’s like we’re all part of a community that navigates from country to country. Sometimes it’s because we’re forced to, and other times we want to escape our own privileged position, like me going to America. [Laughs]
BABAK RADBOY — That’s why we came to Paris.

OLIVIER ZAHM — Can we say that you have commercial success now?
TELFAR CLEMENS — I wanna be rich as fuck. [Laughs] I want to be really commercially successful.

OLIVIER ZAHM — And are you not afraid that it’ll downgrade your legitimacy?
TELFAR CLEMENS — I’m not scared of that. It’s taken me this long to get to where I am. I’ve crashed and burned a lot more. It’s really exciting to see, “Oh, someone likes it.” Because we’re used to getting an egg thrown at us after we do a really good job.
BABAK RADBOY — Did you know we redesigned the uniform for White Castle?

SAVANNAH NOLAN — The best burgers in the United States of America.
BABAK RADBOY — We’ll take you! [Laughs] But for a lot of brands, that would be a disaster. For us, it’s the opposite. I don’t know that we can fuck our shit up unless we actually compromise.
TELFAR CLEMENS — Yeah. If you stop being yourself, nine times out of 10 it comes out really wrong. And anytime we’ve ever tried to fit in, we do the worst job of fitting in. 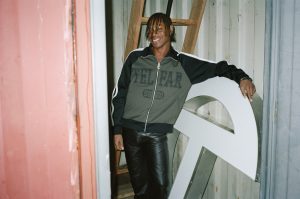