interview and portraits by OLIVIER ZAHM

OLIVIER ZAHM — Is it inspiring being in Brooklyn?
GENESIS BELANGER — I think at some point it was inspiring, but it’s not the same city. It’s become really basic.

OLIVIER ZAHM — [Laughs] Do you mean it’s losing its poetry? Or mystery?
GENESIS BELANGER — Yeah, and its grit. I used to walk around and be inspired by everyone I saw in the street and be like, “Oh, wow —
I bet I’d love to have a conversation with that person.” And now I walk around, and I’m like, “I have nothing in common with these people.” [Laughs]

OLIVIER ZAHM — We’re doing an issue about the brain, about the way we filter information today and see the world. So, I’ve come to try to understand how you see the world. You love domestic objects. Do they speak to you? Do you have a dialogue with them?
GENESIS BELANGER — [Laughs] Yeah. Mm… I guess I love them. I think that they’re really great for setting a stage for a narrative because it’s almost like they are set pieces in a play.

OLIVIER ZAHM — Ah, okay. So, it’s the beginning of a story. How do you pick them? You love fruits, plates — all kinds of everyday objects.
GENESIS BELANGER — I start with a context, usually a physical space, and then slowly flesh out the details of whatever story I’m trying to tell. And I’m often drawn to objects that have the ability to be more than one thing — like they’re whatever they represent but also a metaphor for something else or a stand-in for the body. Often, when you see food, it’s hard to not automatically think about eating it. So, you’re not really thinking about the food — you’re thinking about your experience. I’m often trying to point viewers back at themselves, as a way to maybe find a way to relate or find self-awareness.

OLIVIER ZAHM — People often use the term “surreal” for your work. Do you agree with that?
GENESIS BELANGER — I’m not even sure what “surreal” means at this point in time. But I think it’s possible to create a psychological space — and maybe that’s what they mean.

OLIVIER ZAHM — Surrealism, in the early 20th century, presented all these absurd, grotesque collisions of symbols as a sign for something else.
GENESIS BELANGER — I don’t know that I’ve thought about it in that way. I think we, as humans, are processing information with a complexity that we can’t communicate. And we’re taking in information visually and understanding it deeply, even if we can’t regurgitate that textually. And all of the forms and symbols of the past are internalized and create the vocabulary that we can use, in the present tense. To then, as an artist, produce something for the viewer to understand in a way they can’t articulate. That’s looking backward. And looking backward is a way of processing the present.

OLIVIER ZAHM — In your art, there’s a lot of humor, but there’s also a connection to this period when art was an exploration of the subconscious. If you look at your bananas, they’re mysterious, they speak to our subconscious. So we feel something when we look at your work, we have an emotion. Sometimes we laugh, as a classic Freudian defense mechanism. [Laughs] Do you believe in the subconscious?
GENESIS BELANGER — Definitely. I think that we’re operating on a level that’s below our comprehension at all times. And our motivations are mysteries to us. But I don’t think they’re mysteries to everybody. If you look at the advertising industry, it weaponizes our subconscious and our desires against us. It knows what we want, even if we don’t know what we want. And that’s fascinating, and brilliant, and frightening, and really inspiring — all at the same time. So, I sort of think about that, and I’m like, “Can you make something that’s really desirable and repulsive simultaneously?” Because I think those things coexist. And even if we don’t think that they coexist…

OLIVIER ZAHM — In advertising, you only have the appealing, seduction side of this mechanism. But you work on both sides. On repulsion, too.
GENESIS BELANGER — Yes. I always make things that I find gross. [Laughs]

OLIVIER ZAHM — So, it’s attraction and repulsion combined?
GENESIS BELANGER — Definitely. Because I think that’s more accurate for human psychology. These things always coexist. Even in beauty. Sometimes you have a person who is classically beautiful, and they’re not as beautiful as someone who’s a bit hideous.

OLIVIER ZAHM — That’s interesting. Do you think your work can be therapeutic for the mind?
GENESIS BELANGER — For me or the viewer?

OLIVIER ZAHM — Let’s say for you, to start with.
GENESIS BELANGER — [Laughs] Hmm… I’m not sure. I’d say most likely… And maybe for the viewer? In the best-case scenario, yes. If it actually works the way that I’d hope, where you look at these tableaux, and they touch something familiar and make you think about yourself. I think that’s how therapy works. So, maybe that’s therapeutic? But I’m really speculating here! [Laughs]

OLIVIER ZAHM — But it’s like an African mask… It’s like any form of anthropomorphic object giving a sense of, say, peace.
GENESIS BELANGER — [Pauses] Peace? I feel like I’ve heard the opposite. If you think about the uncanny, which is something familiar — we recognize ourselves, and because of that recognition, it makes us uncomfortable because it isn’t actually familiar. So I think it can go both ways. You recognize yourself, and that comforts you, but also you recognize yourself, and that’s disquieting.

OLIVIER ZAHM — That’s right. But in this secret dialogue between you and the anthropomorphic figure, something happens. We need that discussion, that sort of dialogue with the uncanny, with mystery.
GENESIS BELANGER — Definitely. I also think that when someone doesn’t have an accurate reflection of themselves or their motivations, they’re susceptible to exploitation, and also allow their emotions to motivate actions that are actually unrelated to the source. So, someone is very hurt, and then they do something crazy and violent. And that’s just a misguided placement of that emotion into action. And maybe through self-reflection — and actually seeing oneself — there can be space and time to process the way that we feel, without all of this oozing.

OLIVIER ZAHM — But maybe art, and your sculptures, can help the viewer — the person in a room, in a space — to actually relax.
GENESIS BELANGER — [Laughs] My sculptures are like therapeutic comfort animals or something like that. [Laughs] With a lot of the things that I make, I start from this place of repulsion or being critical of a contemporary political situation, and then no matter what happens, it all ends up looking like a fun party at the end.

OLIVIER ZAHM — But there’s also something sexual about your objects. They’re sort of fetishy. They’re sensual.
GENESIS BELANGER — Yeah, definitely. I’m often thinking about power dynamics and how the world has been established to benefit this tiny portion of white men, and what space does that leave for everyone else? And it makes every other person something to be consumed or to satisfy the desires of the dominant. And that, essentially, is a perversion. I can make everything in my world have a tinge of that — because that’s how the world operates. And I think that’s repulsive and hilarious at the same time. [Laughs]

OLIVIER ZAHM — So, you have a political mind, too?
GENESIS BELANGER — Yeah, definitely. That’s usually where everything starts. I’m super upset by some political power dynamics — and I think everything is political. That’s definitely the way I see the world. You know, sometimes I listen to interviews of successful men, male artists. And they have this way of accepting history as inherently belonging to them. And so, they can rhapsodize about the nuances without ever problematizing it. And I never can look at it that way because I’m always coming from this parallel… I can never just indulge in the history.

OLIVIER ZAHM — You always feel a bit on the side. I read that your family was hippie or into counterculture, so you had this antagonist position.
GENESIS BELANGER — Yeah, totally. I grew up in a way that was definitely not traditional.

OLIVIER ZAHM — Refusing capitalism? Or refusing consumerism?
GENESIS BELANGER — My dad — who’s really quite eccentric — used to say when I was little, “Why would I pay my taxes when there are people starving, and they’re sending monkeys in tin cans into space?” [Laughs] I was like, “Okay!” So, that probably sums it up.

OLIVIER ZAHM — How does he react to your success? Because being an artist today is being part of this commercial system and also being part of a rich ghetto.
GENESIS BELANGER — Definitely. I actually think about this all the time because once you amass some wealth, that essentially is power. What can you do so that it doesn’t just benefit you individually? And this is a problem that I’m currently thinking about. It’s like, if I continue to be successful, I’ll be in this position where I will have some amount of wealth or power, and how can I use that not just for my own individual benefit?

OLIVIER ZAHM — I love public sculpture.
GENESIS BELANGER — I do, too.

OLIVIER ZAHM — Even if they’re really bad.
GENESIS BELANGER — Yeah, exactly. And there’s a ton downtown in Manhattan. Sometimes I like to go down to the Financial District on weekends when it’s empty and just look at all the amazing public sculpture. It’s really cool.

OLIVIER ZAHM — It’s a way to give back.
GENESIS BELANGER — Yeah, but that’s not exactly what I mean. Because that’s so indirect. I mean, that still benefits you as an individual — even if it also benefits others.

OLIVIER ZAHM — So what do you do?
GENESIS BELANGER — I’m more thinking like, “How do I fund
an elementary school?”

OLIVIER ZAHM — A real social project?
GENESIS BELANGER — Yeah. That doesn’t have anything to do with me.

OLIVIER ZAHM — So, you’re on the positive side of the art world? I mean that it brings you joy, a certain pleasure, even though you think it’s a political weapon.
GENESIS BELANGER — Yeah, definitely. I think that all of these things coexist, so art that’s just one of those things doesn’t feel representative of the human experience. So, for me, I can make work because I’m angry about an injustice, and simultaneously that work can be really fun or beautiful — and those things coexist.

OLIVIER ZAHM — And are you influenced by comics and cartoons?
GENESIS BELANGER — Yeah, I grew up when MTV first arrived, and I remember watching those commercial interludes that they made. They were claymation or really rough animations. And I thought that they were the coolest thing that I’d ever seen. [Laughs] And so, when I first started making work like that, I thought, “How can I take a classical material, like porcelain, and have it feel like cheap plastic toys from the dollar store?” Or like claymation objects from ’90s MTV.

OLIVIER ZAHM — But it’s in porcelain! It’s very precious.
GENESIS BELANGER — Yeah, exactly. It’ll last forever. I like to think about archaeologists from the future digging up a hot dog in a purse and ascribing some meaning to it.

OLIVIER ZAHM — So you make it yourself?
GENESIS BELANGER — Yeah.

OLIVIER ZAHM — One last question: what a beautiful name, Genesis. Where does it come from? Did your parents have something in mind?
GENESIS BELANGER — I think they were just, you know, being themselves. 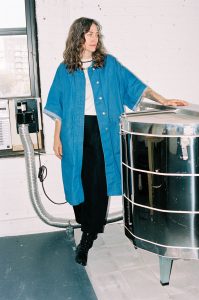 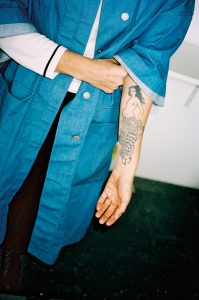 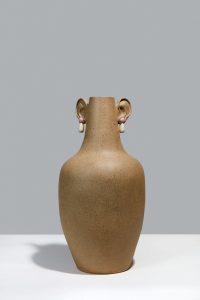 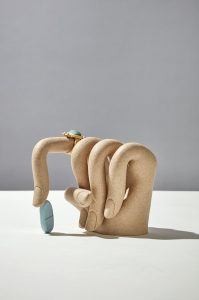 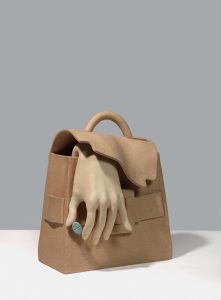 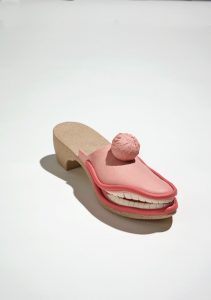