everywhere I look, there I am

brad phillips is an artist and writer in tortonto, canada. His critically acclaimed book essays and fictions came out in 2019

Driving a car down the highway double the posted speed limit with your lights off is incredibly risky. It’ll release phenomenal amounts of cortisol and adrenaline into the body. You’ll feel tired and awful the next day. It’s inadvisable.

Driving a car down the highway double the posted speed limit with your lights off is incredibly fun. It will release astonishing amounts of serotonin and dopamine into the body. I recommend it to anyone willing to pay for a good time.

I sincerely hold both ideas near to my heart, inside of my single mind.

A question hippies would’ve been asked in Haight-Ashbury is, “Where is your mind?” This cannot be answered with the instrument of language. If you say it’s the little gray sculpture inside your skull, you’re wrong. That’s your brain.

Attempt to catch a flying bird in your hands, you will grasp without success.

In 1982, I was eight years old. I lived in a high-rise in the suburbs with my mother and sister.

In school, I was treated as “special” because I was quiet and read excessively, answering questions quickly and easily, while rarely engaging in eye contact with my teachers.

Part of my special treatment included access to the audio library. Unlike other students, I could sign out records and tapes to take home.

I’d never really listened to any music other than what my mother played on the car radio or at home while she vacuumed.

In the library, I was magnetically drawn to an old album of traditional Ethiopian music. I listened to it constantly in my bedroom, sometimes with headphones. I couldn’t understand anything but sang along adeptly, using sounds that mimicked the vocals. I felt warm when I listened to it and would sometimes dance in a Grade 2 style.

Two years later, our father reappeared in our lives and moved us to Ethiopia. I then lived there from age 10 through 12.

No one ever told us why we were there. My father would be gone for weeks on end. I was taught at a school for Western kids. Through listening and watching, I was able to speak fluent Amharic within four months.

When I got there, I knew I’d been there before but had no idea how to communicate this to my parents or teachers. I was steadfast and did not entertain doubt. I recognized all of the smells and sounds, as well as the music, which I now understood the lyrics to.

“I left a part of myself behind when…”

What if this is actually true. Not just a part, but an entire self, left behind to play out the narrative of never leaving Ethiopia. A duplicate. A parallel self.

I wonder if I’m still there.

I wonder if I remember English.

What things can the mind do.

If a young child grows up in a traumatizing environment, they will often hold their body in a crouching posture of fear. Shoulders folded over, inward and protective. Muscles clenched by the response of the amygdala — preparing to fight or run. It’s the mind’s reaction to suffering that manipulates the body into these postures. Then while developing, the body will grow differently than it does for others. If the spine is kept bent and the shoulders inturned, muscles develop to accommodate and perpetuate those bends, guaranteeing a life of back pain. People live in bodies permanently shaped by their experience.

Ten things I know about the mind and find important:

1  The mind primarily functions as the storehouse and generator of pain and suffering.

2  The mind primarily functions as the storehouse and generator of love and beauty.

3  The mind is more enthusiastic about retaining painful memories than it is pleasurable ones.

4  The mind changes its mind often (as I will change my mind before these 10 points end).

5  In 2000, my mother, who had stage “Well, Karen” breast cancer, was able to make her tumor shrink and eventually disappear by visualizing it disappearing while telling herself she was free of cancer.

6  The mind can convince itself that the vehicle it’s being transported in isn’t worth taking care of.

7  The mind, despite absolute knowledge of consequential pain, can convince itself of anything in pursuit of momentary instances of pleasure and relief.

8  Both a completely open and completely closed mind are susceptible to infection by bad ideas, so it’s best to aim for mental equipoise.

9  Understanding the mind is a zero-sum game, so that all of this is speculation, fantasy, and, ultimately, the selfish fetishization of my own preferences, ideas, and desires.

10  It is best to attempt supension of disbelief when reading something like this (which is sometimes called autofiction) so that one is open to narratives that the logical mind would typically dismiss. This is what should be done when watching horror movies, although most of us verbally tell whomever we’re with that “I can’t believe she’s fucking going into the basement,” even while cognizant that what we’re watching is not real, but instead a movie made with actors, sets, specific writing, and illogic.

Recently there have been advancements in the world of theoretical physics. These ideas are theoretical solely due to mathematics’ inability to concretize these things, which are seeming to appear irrefutable. While I am not a scientist, I am able, for the most part, to grasp scientific writing in a way that allows me to feel comfortable discussing it.

These are two subjects in left-wing theoretical physics:

Precognition. Precognition is most simply defined as the ability to see into the future. This is not the same as clairvoyance or crystal-ball, mind-, or palm-reading.

The other is the theory of the multiverse.

Lately I’ve found it expedient to use definitions offered by Wikipedia:

“The multiverse, also known as a maniverse, megaverse, metaverse, omniverse, or meta-universe, is a hypothetical group of multiple universes. Together, these universes comprise everything that exists: the entirety of space, time, matter, energy, information, and the physical laws and constants that describe them. The different universes within the multiverse are called ‘parallel universes,’ ‘other universes,’ ‘alternate universes,’ or ‘alterverses.”

Most people have had experiences of déjà vu, and most people have done things like guess the time of day with total accuracy, or had mild premonitions about people and places that lead them to park their cars in different spots and avoid people who feel “wrong.”

In theoretical physics, déjà vu is more than just an experience that provides a fun anecdote for a cocktail party. Instead, consider that, in line with the theory of the multiverse and parallel dimensions, déjà vu is a moment when our present self interacts with our past self. This can be a past self years behind our present reality or a past self in a parallel dimension just minutes behind us, as unaware of us as we are of it.

Déjà vu is the analogue to precognition. With déjà vu, the proposition is that when people say, “This feels really familiar, like I’ve done it before,” that in fact it’s familiar precisely because they’ve done it before, but in the past. In a different iteration of Brad or Bobby or Sally or Lorna. If each choice we make creates an alternate of ourselves, whose narrative is changed by our choices (a version of myself may exist that went to university and now owns a ranch in Colorado, working as a middling cardiovascular surgeon), then déjà vu may be the experience of our minds briefly glimpsing a larger truth through a tear in the space-time continuum. A feeling is familiar because it is. Getting the popcorn to watch a movie and feeling uncannily like you’ve done it before could simply be the result of bumping into yourself out of time. In the past, an alternate Brad or Bobby or Sally or Lorna may have seen the same movie and paid for the same popcorn, just in a different city two months ago.

Déjà vu is the phantasmic tendril of the past tickling us in the present.

Precognition is seeing into the future. It’s purported that artists and writers are more capable of experiencing precognition because we’re less clock-oriented and observant of reality. We remain open to being constantly flooded by ideas. I work at home. I have no weekends, or my whole week is a weekend. Time is a contractual agreement we sign off on in order to decrease confusion, which leads us to operate under the illusion of organization, chronology, and inevitability.

As an artist, I have no idea where my ideas come from. I can’t sit down and say, “It’s idea time.” I may be half asleep, in the shower, watching television, or staring at a wall when suddenly an idea for an artwork appears in my mind, which I then feel confidently compelled to realize.

According to theoretical/paranormal physicists, what this means is my current self has glimpsed an object made by my future self. In the future, I’ve found this idea compelling enough to create it and have,
in the future, found it satisfactory.

Precognition is easily dismissed, as most people will say they’ve seen particularly notable future events. People will say they witnessed in advance the attack on the World Trade Center, the assassination of JFK, or the Columbine shooting. Since most notable events reach a wide audience, more people will come forward with declarations of having foreseen it. But what could actually be happening is that these people, instead of having witnessed firsthand a historical moment, are actually accessing how they learned of it and are confused.

Instead, what these people are able to see are alternate versions of themselves learning about these notable events in newspapers and on television.

Most people who believe they can see into the future prefer to believe they can predict world-changing events, and would rather that be true, instead of them simply having learned about these events while drinking black coffee in a diner six months ahead of what they know to be the present day.

These are ideas that are popular in physics, applied mathematics, and parapsychology. Medicine is another branch of science, and in neuroscience there are a few interesting
“illnesses” that are extremely rare.

I wonder if the handfuls of people diagnosed with the following, instead of being in some way sick, are in fact just the fluky few who’ve had access to alternate realities but, instead of being seen as special, were medicalized and filed away.

It’s worth speculating, which I said I’d do. Again helpful paraphrasing from Wikipedia:

Reduplicative paramnesia is the belief that a familiar person, place, or object has been duplicated. A person may believe that they are in fact not in the hospital they were admitted to, but in an identical-looking hospital in a different part of the country…

The Fregoli delusion is the belief that various people the believer meets are actually the same person in disguise.

Clonal pluralization of self, where a person believes there are multiple copies of him- or herself, identical both physically and psychologically, but physically separate and
distinct.

Intermetamorphosis is the belief that people in the environment swap identities with each other while maintaining the same appearance.

My wife Cristine and I set a stopwatch when we walk back from the gym to see how long it takes us to get home. Cristine asks me to guess the time. I’ve done it correctly four times now.

As a child, I was absolutely certain that my parents were not my real parents, but people wearing masks of my parent’s faces.

Both of these experiences are real and true, and others can verify them. They both happened in my one mind. 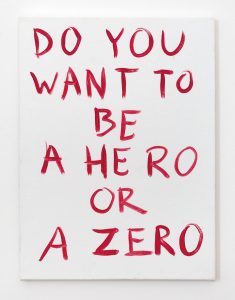 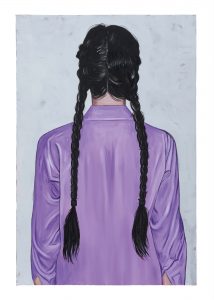 BRAD PHILLIPS, CRISTINE WITHOUT A HAIR OUT OF PLACE, 2019, OIL ON CANVAS, 30 X 24 INCHES, COURTESY OF HARPER’S BOOKS 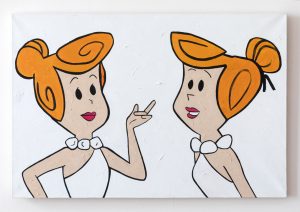