interview and portraits by OLIVIER ZAHM

OLIVIER ZAHM — Does a place or geography influence your painting? I mean, are you sensitive to your environment?
ARIANA PAPADEMETROPOULOS — Yeah, I’m always very sensitive to space. I have to be in an environment I feel inspired by. That’s why my studio here in LA is in Pasadena — in that old mansion. It reflects my aesthetic and the things I’m interested in. I like the trees, the old house, walking through the big iron gates every day. It’s kind of like a haunted house. And a lot of my work has elements of haunted houses, so it makes sense.

OLIVIER ZAHM — [Laughs] You often paint these mysterious interiors, like old houses.
ARIANA PAPADEMETROPOULOS — Or exaggerated or overly idealized ones. One interior I painted from the last show was a nuclear bunker in Las Vegas from the ’60s that the head of Avon cosmetics had built as a party house but also as protection from nuclear catastrophe. Her husband was obsessed with the idea of underground homes — and due to the Cold War, they made a very suburban house with a fake sky with twinkling stars, grass, a pool, a pool house, a barbecue, fake everything. So one of the paintings is of that interior, as well.

OLIVIER ZAHM — Your paintings seem to always reflect something dark, mysterious, or intriguing…
ARIANA PAPADEMETROPOULOS — I guess. I like to make images in the in-between, so they’re dark and light, flat and with depth, pretty but unnerving, innocent but sadistic. So it depends on the viewer — the way you see it.

OLIVIER ZAHM — Are your paintings a reflection of your emotions or of your mind?
ARIANA PAPADEMETROPOULOS — I’ll think about that later. But to be honest, I’m attracted to certain images and make the work in an intuitive way. Then later, everything makes sense together. For instance, for my last exhibition I made a film in Milos where there’s a bed floating in the sea, a vision I had in my mind for so long. But this floating bed paired with the nuclear bunker, the sinking furniture, and the water poured onto images, it’s like everything’s sinking and going into another dimension. And water is also a theme throughout the work. The shows always come together in an organic and intuitive way.

OLIVIER ZAHM — You also produce this watery effect in your paintings.
ARIANA PAPADEMETROPOULOS — Yeah. To create the images, I pour the water onto an image, record the moment that it hits the image, and then I reproduce it. I don’t pour it on afterward. People think that I ruin the paintings after, but it’s all an illusion. So it’s all about illusions, I guess. The illusion of painting, of interiors, of creating these perfect interior spaces.

OLIVIER ZAHM — What is this obsession with rooms and spaces?
ARIANA PAPADEMETROPOULOS — I’ve always been very sensitive to space. I’ve always decorated my room, since I was eight years old. Things had to look a certain way. When a house looks a certain way, I feel a certain way. And all humans feel this. These interior design books from the ’50s and ’60s, to me, it’s art installations that they’ve created. This idea of, “If I design a house interior like this, then I get to be this character inside this house.” And I’m really interested in extreme versions of that — like Jayne Mansfield.

OLIVIER ZAHM — Did she have a crazy house?
ARIANA PAPADEMETROPOULOS — Oh my God, her house. It was called the Pink Palace. Everything was pink, everything was hearts. Her bathroom had fur walls and a heart-shaped tub. To me, she was a performance artist. She wasn’t aware of it, but was like, “I want to create this world and be this character in this world,” you know? She actually had a genius IQ and pretended to be this dumb-blonde character. And I think in LA, we have these very extreme versions of interiors. And I guess I just grew up with that. We have all different types of architecture here.

OLIVIER ZAHM — Yes, it must have influenced you — your obsession with houses.
ARIANA PAPADEMETROPOULOS — Yeah. And I did grow up in two different places here. My mom was in Pasadena and my dad was in Venice.

OLIVIER ZAHM — Opposites!
ARIANA PAPADEMETROPOULOS — Totally opposite. Like country-club land versus a hippie realm. And I was affected, because my personality, in these two different houses, would shift. Everybody experiences something like that. I’m interested and duplicating that experience.

OLIVIER ZAHM — Your interest in interior design really comes through in your work.
ARIANA PAPADEMETROPOULOS — I mean, my house is like this. It’s over the top. I have a swan bed, the ceilings are metallic.

OLIVIER ZAHM — You did it in your own place?
ARIANA PAPADEMETROPOULOS — [Laughs] I didn’t mean to! Now, I’m thinking about what I’m doing and why I’m doing it, but I guess I like waking up in that world.

OLIVIER ZAHM — Always living in a sort of fantasy world?
ARIANA PAPADEMETROPOULOS — [Sighs] I suppose. I’m learning that I’m creating a fantasy that I’m living in… and I don’t really look at the news, I don’t know what’s going on in the world — not purposefully, but I do curate a life for myself and surround myself with certain types of people. And kind of try to stay in a world.

OLIVIER ZAHM — In your own world?
ARIANA PAPADEMETROPOULOS — A little bit. But we all do. I think that with social media — we’re all delusional and living in whatever kind of curated world we’ve determined for ourselves.
I think everybody has a hard time deciphering reality from fiction, more than at any point ever before.

OLIVIER ZAHM — But an artist’s mind is more oriented toward this fiction, or transfiguration, of the world than looking at it and facing it. Also, this world is more and more scary for your generation.
ARIANA PAPADEMETROPOULOS — Yeah. I don’t know if it is, or if it’s because we have knowledge of everything that’s going on that it is. I’m sure living in World War II was hell. I’m sure living in the Middle Ages was hell. I’m sure the Vietnam War was hell. I feel like every generation has to deal with something bad. But because we have instant knowledge of every statistic and bad thing that has happened and is yet to come, it feels like it’s the end of the world.

OLIVIER ZAHM — And it’s visible on your phone immediately.
ARIANA PAPADEMETROPOULOS — Yeah. And so I think perception is skewed. I’m not saying that I don’t think global warming is happening and that there aren’t horrible things happening, but I don’t know if it’s worse now than it was before, or if it just feels that way because it’s a constant influx of information that we can’t handle, you know? And we feel powerless because mostly everything we’re shown, we can’t do anything about. So it’s a strange cycle.

OLIVIER ZAHM — So do you think art offers a protection or a self-defense, or even a therapy, against this fear of possible apocalypse?
ARIANA PAPADEMETROPOULOS — I’ve struggled with this a bit because, as an artist, I’m not at all political but also feel guilty because of the state of the world. I’m more engaged with fantasy and magic and seeing the beauty of it. That’s what I’m good at. So I think, I’m just going to do what I’m good at, and I assume whoever’s good at doing their thing, they do that. I do what I do because I don’t really have a choice.

OLIVIER ZAHM — But aren’t fairy tales and dreams and phantasmagorias also an answer?
ARIANA PAPADEMETROPOULOS — Yes. And I believe that they exist in this world. Because even if my work seems fantastical, it’s all based in reality. I think it’s about finding the magic that already exists. I’m actually not that into fairy tales. It seems like I am, but I’m not. I’m more into science and documentaries on nature — that’s the magic, that gets me excited to make work, if that makes sense?

OLIVIER ZAHM — It does. Your art is also a filter on reality. Because it connects us to what’s going on today. It’s not just a bad dream, it’s also political, even if you don’t like this word. It also says something about today.
ARIANA PAPADEMETROPOULOS — Yeah, a filter on reality. 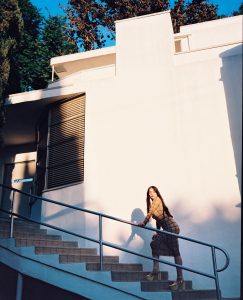 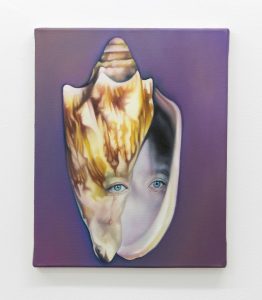 ARIANA PAPADEMETROPOULOS, HE PREFERRED ME IN FANTASY, 2019, OIL ON CANVAS, 20 X 16 INCHES, COURTESY OF THE BREEDER 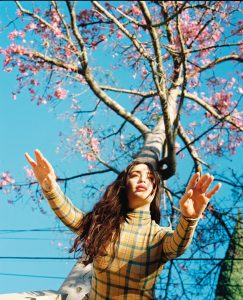 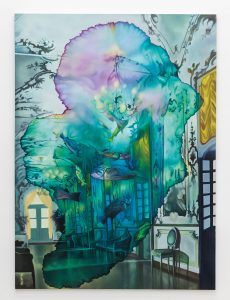 ARIANA PAPADEMETROPOULOS, WHEN I MET MY FIRST SPIRAL, 2019, OIL ON CANVAS, 94 X 78 INCHES, COURTESY OF THE BREEDER