OLIVIER ZAHM — Ottolinger: where does the name come from?
COSIMA GADIENT — Our first studio was in Berlin. We shared a mailbox with an apartment, and we’d receive packages for that name. When we left, we kept the name. It looked good! And it didn’t mean anything.

OLIVIER ZAHM — What’s it like working as a duo?
CHRISTA BÖSCH — It’s really good to have two people. If one person thinks something is good, and the other not so much, we find a way where both of us find it really good — then it works.
COSIMA GADIENT — And you get perspective. Each of us can step out and look at it.

OLIVIER ZAHM — Do you ever feel there’s a risk of censoring the other person’s creativity if you don’t agree?
CHRISTA BÖSCH — I don’t think so. I mean, maybe it happens sometimes. But then, after an hour or so, one of us might say, “Actually, it’s a really good idea” — because it can bring you out of your own thinking.
COSIMA GADIENT — And it’s rarely vetoed. That almost never happens.

SAVANNAH NOLAN — It’s really hard to find someone you mesh with on a creative level. How did you find each other?
CHRISTA BÖSCH — We studied at the Basel School of Design. We always liked each other’s work, and then we became friends and talked about the work we were doing.
COSIMA GADIENT — We didn’t know it would work out. We recently talked about it, realizing we’re super lucky. It’s like a relationship: sometimes it matches and works very well.

OLIVIER ZAHM — For my generation, becoming a designer was equivalent to saying, “I want to be Yves Saint Laurent. I want to be someone who’ll make it in this elite world.” Is fashion more democratic to you?
COSIMA GADIENT — We like the idea of empowering people. So, maybe we have a different approach to certain materials, or to the silhouette, or to the show and the whole world we create in. It’s not that there’s this pyramid and we want to be on top of it. We want to invite people to be part of our world.

SAVANNAH NOLAN — Right now, there’s a lot of destruction in the world — it’s a very chaotic place. There’s chaos in your clothing, too: a lot of destruction and deconstruction. Is that related to what’s going on, or is it just an intuition that happens to coincide with the political climate?
CHRISTA BÖSCH — I think it’s intuition. But intuition and fashion always go along with a current situation, and it would be ignorant to look away from the political climate, especially now. It’s also very interesting that we are often asked the question. I think we all have to be more aware of the political situation, and somehow our clothes evoke this.
COSIMA GADIENT — We don’t try to be dystopian. But there are thoughts about the future we like to play with because everything feels like it’s peaking.

OLIVIER ZAHM — Speaking of deconstruction, you destroy more than deconstruct, right? Do you use acid?
COSIMA GADIENT — Yeah. [Laughs]
CHRISTA BÖSCH — It’s not about destroying. It’s more the process that we like: working with our hands, building up something… It can make things more beautiful.
COSIMA GADIENT — And when we used the blowtorch, we couldn’t really guide it — it would just go its own way. [Laughs] We have a lot of processes that we’re only half in charge of. So, we’ll do something or apply something to the garment, like paint, and then it just does its own thing. And we like that coincidence…

OLIVIER ZAHM — Can you duplicate it?
COSIMA GADIENT — Yeah. They’re all unique, but we have patterns, or a technique, to make it look the same.

SAVANNAH NOLAN — Do you find a lot of inspiration living in Berlin?
COSIMA GADIENT — Well, Berlin’s a city with so many people who aren’t German, so this special combination of people is maybe what a future city might look like.

OLIVIER ZAHM — Yes, it’s a prototype of the creative city.
COSIMA GADIENT — There are so many people from abroad, so everyone speaks English — to the point where it gets a bit weird.
CHRISTA BÖSCH — Like a new society.

SAVANNAH NOLAN — How long have you been based in Berlin?
CHRISTA BÖSCH — Three years.

SAVANNAH NOLAN — Why did you choose Berlin?
COSIMA GADIENT — We had friends there. And we could afford a big space, which we wouldn’t be able to afford in Paris.

OLIVIER ZAHM — In Paris, we’ve been waiting for designers to come out of Berlin for years. Germans have a strong point of view, but it’s more minimalist, darker, and very discreet.
COSIMA GADIENT — They’re not flamboyant.
CHRISTA BÖSCH — No, it’s not show-offy at all.

OLIVIER ZAHM — How do you see social media today? Is it part of your brand strategy? Is it part of your mind? Is it positive or negative?
COSIMA GADIENT — Social media is why we’re in Berlin — because it doesn’t really matter where we’re based. We can promote our brand from any place, literally. We can be in Paris, Berlin, Dubai, or Switzerland. It doesn’t matter. It’s like this window to this world where everyone’s connected. So, for us, it’s very positive.

OLIVIER ZAHM — Do you use it as a creative source of information?
COSIMA GADIENT — Sometimes. We also have times where we don’t go on it. Because it’s so much information. You need to block it out because it’s too much.
CHRISTA BÖSCH — But we also use it to see what’s going on in fashion — who’s wearing what, and where.
COSIMA GADIENT — Yeah. It’s like a news channel. In the morning, you go on and see what’s happening.

SAVANNAH NOLAN — What do you think is going on in fashion?
COSIMA GADIENT — It’s a super-interesting moment. The industry became much bigger, somehow. But in the same moment, nothing is stable, and it feels like it can change anytime. It’s a feeling that everything is possible but also not possible.

SAVANNAH NOLAN — Do you find the competition hard? Is there room for young designers, or do you feel drowned out?
COSIMA GADIENT — Maybe both, at times. We try to make fewer objects, and we have this very specific local treatment. Also, kids are so much more interested in fashion. My cousin — she’s 13 — knows about fashion through Insta­gram. She really knows what she wants to wear. She also resembles the Instagram generation. The market has gotten so much bigger. People consume in a way that also makes you question: “How far can this go? How much can someone consume?”

OLIVIER ZAHM — How do you see Paris? Is it exciting again, or is it still a conservative pyramid of snobs protecting their privilege?
COSIMA GADIENT — I don’t see it like that. But I can see why people would.
CHRISTA BÖSCH — We like Paris a lot. What I find inspiring is that people care about how they dress — it’s fun to dress up. And sometimes you forget this in Berlin. 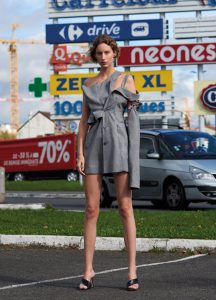