a spiritual-master success story:
the self-realized yogi and sadhguru
touches the lives of millions worldwide
through the mental training he calls “inner engineering”

OLIVIER ZAHM — The brain can be a positive or a negative force: is it something we have to domesticate or control?
SADHGURU — No, the mind should be liberated. Why should it be controlled?

“Everybody is a psychological creature, wanting to assign meaning to everything. Seeking is not about looking for something. It is about enhancing your perception, your very faculty of seeing it.”

OLIVIER ZAHM — What do you mean by “liberated”?
SADHGURU — To become free from all compulsiveness. What makes people suffer isn’t the brain — they’re suffering from their compulsiveness. People develop compulsive habits. And because it becomes cyclical, it hurts. Right now, intelligence is the only thing that’s hurting human beings. If they had half a brain, they’d be fine. If they had the brain of an earthworm, they’d be more than fine. It’s unfortunate because it took millions of years to get the brain to this level of evolution. Can you imagine how much work it’s taken nature to go from a single-celled amoeba to make you the way you are right now? And now you suffer from it. Fantastic. [Laughs]

OLIVIER ZAHM — Is it because we’re trapped in our own egos?
SADHGURU — The ego is a fall guy. When you do something nice, you say, “I did it.” When you do something nasty, you say, “Mr. Ego did it.” If you say, “It’s me who does good things, and it’s me who does nasty things,” you will fix yourself. If it’s Mr. Ego, you can never fix it — because how can you fix a guy who doesn’t exist? It’s you who is capable of terrible things and beautiful things — you’re capable of doing them all. If you say, “It’s just me doing all of those things,” then you will choose to do beautiful things. But if you think that all the nasty things are done by Mr. Ego, you can never fix the guy because you’ll never find him, all right? Let me ask you: in this body, how many people are there?

OLIVIER ZAHM — I try to be only one, but sometimes I’m two.
SADHGURU — No, no, no. If you’re multiple people, that means you’re messed up, right?

OLIVIER ZAHM — Certainly. But everything is pushing us to have multiple identities today. We can have…
SADHGURU — I’m saying you should have no identity — identities are only for functioning in the world. If they come to you at immigration, you have to say, “I’m French.” That’s only for that purpose — for the immigration officer, not for you. If you believe yourself to be anything other than who you are, you’ll get messed up. I’m asking you: are you alive?

OLIVIER ZAHM — Alive. Um…
SADHGURU — Oh, you’re thinking about it! This is really European. [Louder] Are you alive?

OLIVIER ZAHM — Sometimes I am — when I’m in love, when I have sex, when I’m inspired.
SADHGURU — Otherwise you’re dead, then?

OLIVIER ZAHM — Otherwise, I’m just overloaded by questions and distractions.
SADHGURU — What’s wrong with the question, then? Why can’t we joyfully handle that question? [Laughs]

OLIVIER ZAHM — The questions are an obstacle. When you’re alive, you don’t question, you just live.
SADHGURU — Really? Why are you questioning me then? You’re a dead man asking me questions?

OLIVIER ZAHM — No, I’m questioning you because I think you have a certain power over the brain. You’re able to influence people, and you’re in control of your own brain. You also wrote a book about “inner engineering.”
SADHGURU — Not controlling — I’ve liberated my brain. That’s why no stress, no anxiety, no nothing — because it’s liberated, not because it’s controlled.

OLIVIER ZAHM — I see. But do you train your brain to liberate it? To forget about this stress and anxiety?
SADHGURU — Why would you need to forget something that’s not there?

OLIVIER ZAHM — It’s true. But how did it go away for you?
SADHGURU — I did some engineering inside —  it’s called “inner engineering.”

“I grew aware of that extraordinary intelligence within each of us that is capable of transforming a piece of bread or an apple into the human body in a single afternoon. Not a small feat! As I began consciously touching that intelligence, which is the source of creation, seemingly inexplicable events started occurring around me. Things that I touched were transformed in some way or other.”

OLIVIER ZAHM — So, you engineer the brain so that step by step…
SADHGURU — It functions the way you want it to!

“The ability to transform my external and internal reality quite dramatically has continued within me and around me to this very day. It is not something I have ever tried consciously to achieve. It is just that once one is in touch with this deeper dimension of intelligence, which is the very basis of our existence here, life turns quite naturally miraculous.”

OLIVIER ZAHM — [Hesitates] So, you empty it?
SADHGURU — No, no, no. [Laughs] Don’t go and write that I’m empty-brained! [Laughs] If your brain was taking instructions from you, would you make it joyful or miserable? Joyful. So, if your phone is taking instructions from you, should it record my voice? Or record the thunder that’s happening in the equatorial region just now?

OLIVIER ZAHM — I agree.
SADHGURU — So, is your brain useful to you if it doesn’t take instructions from you?

OLIVIER ZAHM — No. But let’s go further. What do you think about all the science trying to duplicate the brain and create artificial brains in machines?
SADHGURU — [Sighs]

OLIVIER ZAHM — Because this is what we’re trying to do. We’re trying to have machines think for us — think faster than us.
SADHGURU — How did you come here from France? Swimming?

OLIVIER ZAHM — What do you think? I flew.
SADHGURU — Ah. So, you did take a machine that travels faster than you?

OLIVIER ZAHM — Mm-hmm.
SADHGURU — So what’s wrong with a machine that thinks faster than you?

OLIVIER ZAHM — Maybe nothing. You’re not afraid of this AI technology, then?
SADHGURU — I’m not afraid of an airplane. So, why would I be afraid of something that thinks faster than me?

OLIVIER ZAHM — Mm. But it’s a different kind of transportation, the brain. It can control us. A plane will never control us, but the machine can.
SADHGURU — Oh, it does! Once you’re in that aluminum can, it controls your life and death — you better know that. Most people have forgotten that because the moment you get on the plane, they’re serving drinks.

“Above all, there is substantial medical and scientific evidence today that your body and mind function at their best when you are in a pleasant state. It is said that if you can remain blissful for 24 hours, your intellectual capabilities can be almost doubled. Just settling the internal muddle and allowing clarity to surface can achieve this.”

OLIVIER ZAHM — That’s a good perspective. I wish I could have it. Because people break up with me all the time. You speak of “engineering the brain” — so, the brain is like a machine? You can work on it? You can fix it?
SADHGURU — Tell me, can you fix your body?

OLIVIER ZAHM — Yes. I lost weight for example.
SADHGURU — Then why do you think you can’t fix your mind?

“There is something within every human being that dislikes boundaries, that is longing to become boundless. Human nature is such that we always yearn to be something more than what we are right now. No matter how much we achieve, we still want to be something more. If we just looked at it closely, we would realize that this longing is not for more; this longing is for all. We are all seeking to become infinite. The only problem is that we are seeking it in installments.”

OLIVIER ZAHM — We don’t have the technique for that, really.
SADHGURU — Hence, the “inner engineering.”

OLIVIER ZAHM — Can you give me an example of this technique?
SADHGURU — I’m here. I’m the example.

OLIVIER ZAHM — So, do you accept being called a “guru”?
SADHGURU — What do you think a guru is? I’m not a guru — I’m a sadhguru.

OLIVIER ZAHM — What’s the difference?
SADHGURU — The difference is that a sadhguru is an uneducated guru. That’s the best thing about me — no education.

OLIVIER ZAHM — Okay. So, we can all be our own gurus then?
SADHGURU — Oh, that’s a very French idea.

OLIVIER ZAHM — It doesn’t require education, only spiritual training?
SADHGURU — A dimension that you don’t know. How do you educate yourself on that? If you’re in a new terrain, where you don’t know the way, you better listen to somebody who knows the terrain, right?

OLIVIER ZAHM — Yes.
SADHGURU — Otherwise, to find something in your neighborhood, you’ll go around the globe and come back — you’ll waste your life. You may find it, but it’s at the end of your life. What’s the point? [Laughs]

OLIVIER ZAHM — So, you can be a sadhguru and have a real sense of humor, too?
SADHGURU — People ask me, “What is this?” And I say, “It’s a GPS: Guru Positioning System.”

OLIVIER ZAHM — [Laughs]
SADHGURU — If there’s a terrain that you don’t know how to navigate, you get help. It’s sensible to do that.

OLIVIER ZAHM — Mm. But what’s the destination? Is it peace of mind?
SADHGURU — Hu-hu! If the destination is peace of mind, you’ll only rest in peace. “Imagine that you were locked in a cubicle of five feet by five feet. However comfortable it is, you would long to be free of it. The next day, if you were released into a larger cubicle of ten feet by ten feet, you would feel great for a while, but soon the same longing to break that boundry would return. It does not matter how large a boundary we set, the moment you become conscious of it, the longing to break it is instinctive.”

OLIVIER ZAHM — Yes. [Laughs] People like to believe they will find a place that will give them peace after life. Is that a good idea?
SADHGURU — It’s a good idea to rest in peace? If you live such a terrible life, the only time you’ll rest is when you die. Is that a good way to live? I’m saying: forget about playing with a thousand other minds. If you don’t know how to manage your mind, why the hell are you here? If your hand is out of control and starts poking at your eyeballs, you’ll weave a philosophy around that. Fingers poke eyeballs, so we’ll do this, we’ll wear protection, we’ll do all kinds of things. No! The hand must be under your control — it must do what you want. So, right now your mind is doing the same thing: it’s poking you all over the place. And you’re trying to weave a philosophy around it instead of taking charge of it.

OLIVIER ZAHM — Do you see the brain as the most important organ in the body?
SADHGURU — In yoga, we don’t see the brain as this or that. It’s all body — different parts of the body have different functions. What you call the brain has thought processes. But it’s just part of the body, right? This whole idea that people separate the brain and the body is silly. Brain is just body. You made it into such a trouble-making box…

OLIVIER ZAHM — [Laughs]
SADHGURU — You think it’s a thing by itself! No, it’s like any other body part. A lot of people can live without a brain. But can you live without a kidney, or a liver, or a heart? So, don’t give so much importance to one organ. Everything is important. 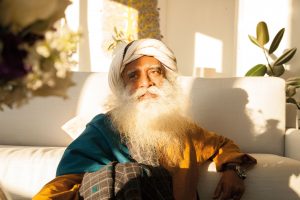 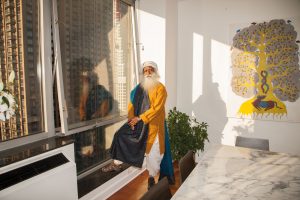 Extracts from inner engineering: a yogi’s guide to joy, published BY SPIEGEL & GRAU