We wake up wanting to feel different. A cigarette, espresso, drink, or joint marks our desire, conscious or unconscious, to shift our mood, moment to moment. But there has been another shift. We don’t want simply to feel different. We want to feel differently. Psychedelic drugs, long-synonymous with recreation in the West, are making their way over the counter to pry open our well-worn synapses, promising new ways to be. Ketamine- and MDMA-assisted therapy are increasingly used to treat depression and PTSD (post-traumatic stress disorder). Microdosing is the personal and professional problem-solver du jour. Will these compounds lead to long-lasting changes in society? Or are they just the latest trend in lifestyle marketing from the pharma-industrial complex? The chemist Hamilton Morris, a psychedelic-drug veteran, discusses the limits of psychopharmacology and its influence on his work.

LEAH KELLY — Do you think about neuroscience on a personal level, in your daily life, in terms of your mood or responses to stimuli?

HAMILTON MORRIS — I used to. A big part of the scientific mindset is projecting this fantasy narrative onto everything about why things are the way they are or why things feel the way they do. Now I find myself wondering about the chemistry of things.

LEAH KELLY — In terms of your own brain chemistry, I know that throughout the years you’ve been using titrated compounds to make yourself more efficient or productive. Do you think it’s important or helpful?
HAMILTON MORRIS — I’ve become less sure of everything and even more skeptical about my assessment of drugs. I’ve come to appreciate the virtues of not being dependent on things. I used to feel that there was nothing wrong with using any drug, period. Then I started to think there was something fortifying about not using things I enjoy. It wasn’t that the drugs were having a negative effect or that not using them was having a positive effect — it was that the pure lack of dependence was beneficial.

LEAH KELLY — When you see nootropic or health-promoted products, are you cynical?
HAMILTON MORRIS — Ways to relax that aren’t addictive, ways to improve your focus, ways to improve your sleep, ways to be more social — people will always be designing products to cater to those desires. Most of these products are cynically formulated and, due to the way the law operates, most of them have to be fake. When you look at what’s inside most of these products: B12, ginkgo biloba, L-theanine, caffeine… It’s not compelling to me. I’m cynical in that I think they are unlikely to work, but I don’t think there’s anything wrong with experimenting with them.

LEAH KELLY — In all the research you’ve done and labs you’ve visited, have you found anyone asking fundamental questions about how the brain works?
HAMILTON MORRIS — I think that the chemist and pharmacologist Alexander Shulgin really had something figured out in that he recognized that there was chemistry that could be understood and that there was experience that could be understood, and anything bridging the two was so murky that it was almost better not to deal with it. I know that’s a defeatist stance. Ultimately, there will be very important insights into how the brain works through neuroimaging and genetics. I think we’re a long way from anything that approximates the value of a single human bioassay. Everyone’s eyes light up when you say, “I synthesized this drug, and this is what it did to me.”

LEAH KELLY — People often take psychedelics hoping for a spiritual epiphany, but you maintain a purely reductionist, mechanistic approach to the dissection of your personality. I remember you said that after one of your experiences, you believed in god for five days. It made you less critical of religious people.
HAMILTON MORRIS — I don’t bring the supernatural into the equation. That did happen; it’s so uncharacteristic. I wouldn’t believe it if I hadn’t made a point of recognizing it when it was happening. That’s a perfect example. I take a very potent serotonin receptor 5-HT1A agonist, and then, for a period, I have this sense of the existence of god.

LEAH KELLY — Seeing the footage of you taking toad venom, an extremely potent natural psychedelic, and lying down and repeating “love,” part of me thought, “That’s Hamilton.” But part of me was also really surprised.
HAMILTON MORRIS — I reviewed the footage myself because I had no memory of it. I was unconscious for 17 minutes. It’s very strange to watch. Those substances have somewhat consistent effects on people. It’s so different from a classical psychedelic experience because it doesn’t have any visual component. There is no narrative, but there is amnesia. It’s highly dissociative. It’s almost the complete opposite of a classic psychedelic in terms of what Shulgin was looking for, which is something that facilitates communication, bodily awareness, being present.

LEAH KELLY — You maintained your ability to use language at least.
HAMILTON MORRIS — I did. But even the “love” thing wasn’t a rationally decided-upon term. I was aware that there was something overwhelming, and I needed to anchor myself. Love felt like a strong, anchoring concept that was good, that would fortify me to withstand the experience.

LEAH KELLY — You mentioned Alexander Shulgin, who introduced MDMA to psychologists in the late 1970s for psychopharmaceutical use. What do you think about MDMA-assisted therapy today?
HAMILTON MORRIS — Psychedelics provide dramatic access to components of your psychology that are otherwise difficult to reach. I noticed the language surrounding drug use changed in the wake of the Michael Pollan book How to Change Your Mind. It’s almost as if people don’t feel comfortable saying that they enjoy drug experiences anymore for recreational use. That it’s not allowed. It seems like every person who e-mails me has PTSD now. It’s more and more extensively medicalized.

LEAH KELLY — Do you think we could treat whole countries for generational trauma?
HAMILTON MORRIS — Is it ethical? Should someone who has been involved in some violent conflict be absolved from guilt? That’s one aspect of PTSD. If you are in the military, and you have been bombing civilians and have PTSD, is that something you want to treat? Or is that a rational response to having done something terrible? Is forgiving yourself useful in that case? I don’t know.

LEAH KELLY — Have you taken the same compound in different contexts with very different results?
HAMILTON MORRIS — Yes. It’s always different. I appreciate that. Often people don’t. They’ll take LSD and try it again three years later and say, “Oh, this LSD today is terrible.” They’re not realizing that they’re bringing something to the table. It could be a different dosage, or it could be a purely psychological variation.

LEAH KELLY — Is there something particularly satisfying in consuming something that you yourself have synthesized?
HAMILTON MORRIS — Absolutely. Anything that connects you to what you’re consuming makes it more enjoyable. You know the care you took. When it comes to things that are novel, there’s even more appreciation for a type of matter that never existed in the universe before. Through that little experiment, you could broaden the understanding of consciousness. It connects you to the long lineage of self-experimenters who have used the same methodology to answer basic questions about medicine, and I have tremendous love and appreciation for that. 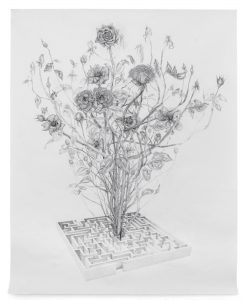