since the late ’80s,
the abstract artist has made waves
with his mind-bending visuality and his graphic,
ironic twists on avant-garde painting

BILL POWERS — When I interviewed Mark Grotjahn, he made a distinction between abstract painting and nonobjective art. Nonobjective art has no direct correlation to the real world — like a Mondrian, for example.
PETER SCHUYFF — Maybe he was talking about the difference between a painting and a picture? My friend and favorite artist Neil Campbell refers to his work as “pictures,” and he makes minimal, formal abstraction much in the spirit of a John McLaughlin.

BILL POWERS — Why does he call them pictures?
PETER SCHUYFF — Because they’re purely visual. In my case, I have a relationship with the back of my paintings. I’m very fussy about them as objects. But I do use light and shadow, so in that sense, yes, they are pictures. But they have all these squishy brushstrokes, so they operate as paintings as well.

BILL POWERS — I was surprised at how different your paintings appear to the naked eye, as opposed to seeing them in reproduction. You can really notice the hand in them.
PETER SCHUYFF — Because I am responsible for that hand, whenever I finish a painting, it’s hard for me to see it — so the first thing I do is take a picture. My paintings look really good on my iPhone. It’s akin to painters in the 19th century having a Claude glass, which is a piece of obsidian they’d use to look at a reflection of their painting. It would also render the painting black and white.

BILL POWERS — Or sometimes a painter will flip a canvas upside down to see it with fresh eyes. I know that John Currin keeps a hand mirror in his studio to look back at paintings over his shoulder.
PETER SCHUYFF — My painting studio is really dark. I like to limit what I see, limit what I’m responsible for — to distill, to define my domain. Otherwise, I get tired.

BILL POWERS — That’s funny because Julian Schnabel says he likes to paint in the dark, too. Do you like the fact that your paintings operate so differently in person?
PETER SCHUYFF — You mean the apparency of the brushstrokes? I suppose.

BILL POWERS — Which reminds me of Marcel Duchamp talking about painting on glass, which he loved because he suspected too many backgrounds in paintings were done without real intent.
PETER SCHUYFF — I’m definitely at my best when I dumb it down. When I get out of the way. I tend to get in trouble when I have a “bright idea.”

BILL POWERS — Do you think of your paintings as having a temperature?
PETER SCHUYFF — All of my life, I’ve only used six or seven tubes of paint. I don’t think of myself as a colorist. That’s not how I express myself.

BILL POWERS — Interesting that you are a literalist. So does that make your paintings room temperature?
PETER SCHUYFF — Lately I’ve been trying to paint some heat. I always start with a grisaille and then build layers of color on top of that. More recently, I’m starting with color, which is such a simple and obvious thing to do in a really Old-Master way.

BILL POWERS — Do you imagine your paintings have a geography to them, or do they exist solely in fictional space?
PETER SCHUYFF — They only exist where they are. They’re not pictures of somewhere else. It’s paint.

BILL POWERS — You talked about light and shadows before. If there are three kinds of light in painting — natural, artificial, and divine — which type do you employ?
PETER SCHUYFF — I would have to say I use divine light because it’s totally imaginary and unrealistic illumination. The light always comes from one direction. Although recently they’ve gotten more subtle. I don’t know if I would say “divine” because of the religious connotation. Let’s say fake light.

BILL POWERS — Did you get grouped into the Neo-Geo crew in the 1980s?
PETER SCHUYFF — Very much so. I was often mentioned alongside Philip Taaffe.

BILL POWERS — And Neo-Geo was just a few years on the heels of the Pictures Generation, right?
PETER SCHUYFF — But I think the artists from the Pictures Generation were much closer to each other. I’ve been with Peter Halley maybe four or five times in my life. Philip and I were sort of friends because we both showed with Pat Hearn, so we’d be at a lot of the same dinners.

BILL POWERS — You were exhibiting in the deep East Village then because Pat Hearn was on, like, Avenue B and 6th Street.
PETER SCHUYFF — I was in Pat Hearn’s first show and had more shows with her than any other artist. I left the gallery after she moved to SoHo. When she got together with Colin de Land, she became much more socially conscious, which is great as a person, but not obligatory as an artist.

BILL POWERS — Josh Smith once said: “It’s disappointing to learn that you can’t only be an artist. You also have to be an entertainer.” Does that resonate with you?
PETER SCHUYFF — I’m not much of an entertainer, although I guess as a musician, I am.

BILL POWERS — You and your studio manager were once in a band together?
PETER SCHUYFF — We had a band called The Woodwards. At one point, I had this chorus of women singing with me. I play the guitar. They are very clever songs. With the songs, I get in the way. With the paintings, I try to get out of the way, which is easier said than done.

BILL POWERS — Where are you from originally?
PETER SCHUYFF — I was born in the Netherlands, and then we emigrated to Canada in the 1960s.

BILL POWERS — But you did some solid New York time, too — starting when?
PETER SCHUYFF — I moved to Williamsburg in 1980. It was rough, but it was fun.

BILL POWERS — Is there some overlap between your music and your paintings?
PETER SCHUYFF — Maybe in their geometry and their irony. They’re both quite simple.

BILL POWERS — That sounds to me almost like an extension of Neoclassicism. How do you consider the paintings to be ironic?
PETER SCHUYFF — In the vein of what you were saying earlier about them looking so different in person when you get up close, being as painterly as they are.

BILL POWERS — Which painters from an earlier era did you admire?
PETER SCHUYFF — Sol LeWitt was very important to me, Piet Mondrian likewise.

BILL POWERS — Were you making your tree sculptures in the 1980s?
PETER SCHUYFF — No, I started doing the carvings just before I was leaving New York. I started whittling pencils while I was at the Chelsea Hotel. I’d given up my studio at that point. Then, when I moved to Vancouver, I thought, “What shall I do?” And so I made them bigger.

BILL POWERS — We are conducting this interview right now as we walk the streets of Paris together. Has it been a good trip for you?
PETER SCHUYFF — I saw Brancusi’s studio today. It was so inspiring. I mean, he invented all that shit so I don’t have to. He had a lot more responsibility.

BILL POWERS — The way you use the term “responsibility” is odd to me.
PETER SCHUYFF — Thomas Lawson once referred to me as an “Elvis Presley impersonator” in Artforum. Hey, they are simple, stupid things I make, but they can be really beautiful.

BILL POWERS — Albert Oehlen will invent different rules for himself as a way to establish parameters in his work. Do you have beliefs that you strictly adhere to in the studio?
PETER SCHUYFF — I have rules about how deep a painting is allowed to go or whether a painting can turn a corner. I guess I’m like Alfred Gott­lieb in that the action should never extend beyond the edge of the canvas.

BILL POWERS — Do you have any sayings you subscribe to?
PETER SCHUYFF — Ralph Waldo Emerson wrote, “Do your work, and I shall know you.”

BILL POWERS — How were your paintings initially received in the 1980s?
PETER SCHUYFF — It depends on where they were shown. In Germany, they were confounded by the vacuousness of the work. They just couldn’t believe they were about nothing at all. The paintings really were a product of the ugly ’80s.

BILL POWERS — Which isn’t so far away from Oehlen’s works in the late ’80s. Ugly, I mean.
PETER SCHUYFF — Someone like Albert Oehlen, though — his work implied the possibility of content. My work denied it completely. Albert Oehlen and Christopher Wool are some of my favorite painters. Early on, they challenged my idea of what I can get away with.

BILL POWERS — What did you get from Christopher Wool, specifically?
PETER SCHUYFF — Absolute confusion and mystification. As a painter, that’s just so sexy.

BILL POWERS — I believe it was Kafka who said once you start answering their questions, they’ve won. And maybe that’s what you were looking for visually: questions.
PETER SCHUYFF — What we find appealing as humans can often be so unexpected, like truffles or bone marrow. Or stinky cheeses. 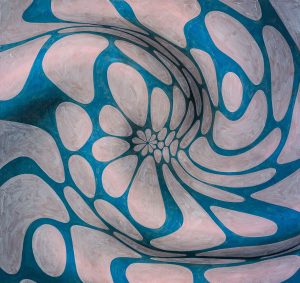 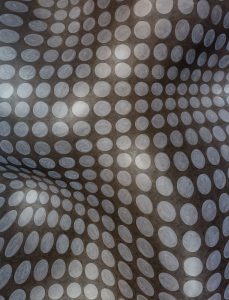 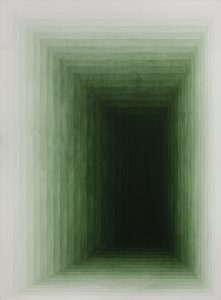 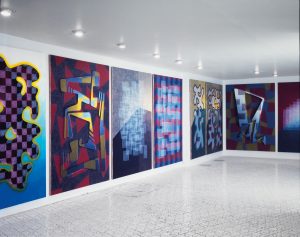 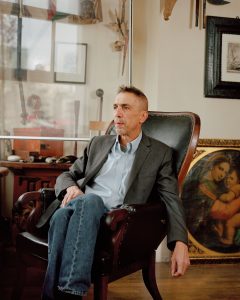