a regular purple contributor, françois simon is a renowned french food critic and novelist. he has appeared in the netflix series chef’s table and was the model for the food critic in the 2007 animated movie ratatouille

No doubt because food has become an obsession, taking up too much space in our lives and bodies, we’re thinking about it more and are creating meals that are a little more mentally engaging, fully conscious, where the brain gets working again. Food often speaks to the lower belly. That’s why it delights us, as if, just for once, the lofty brain has piped down, stopped scolding and controlling. The table becomes a permissive place where, at last, order takes a backseat, pleasure is in charge, and time is the slave. And so it was that a torrent of foodstuffs invaded the century. Television absorbed the impact and then passed it on, and like a leak sprung under the roof, the genre trickled down onto every floor of the house. From all over came books, chatty chefs, index fingers raised. Ingredients were revisited “à la” this, that, or the other. The Earth became groaningly overweight, and calories clogged the brain. But, with all hands on deck, a few islands of resistance are starting to emerge here and there.

Starting with the brain. Having abandoned our tables, now it’s inviting itself back and putting some meaning into our dishes. Abundance and nonsense just about rhyme; a meal is the reflection of all our addictive, additive, and repetitive neuroses. We eat our anger, we wolf down and puff up. To that, the answer is biblical in its simplicity: eat less, eat better, rediscover the quasi-monastic and often orgasmic flavor of frugality.

The experiment is being tested at Bruno Verjus’s restaurant Table, near the Marché d’Aligre in Paris. As he explains: “The way my restaurant is set up means I can gauge my clients’ appetite. They’re sometimes sad, or in love, or famished. They’re cold, thirsty. They want to keep their body lithe, their mind alert. It’s my job to capture that state of mind. Even to look outside and see if it’s hot. If that’s the case, my sauces use infusions, a clear jus. If it’s cold, there’ll be a tad more butter or fat. If it’s raining, if it’s gray, I like to add little splashes of color, to wake up the plate, to bring joy and life.”

The flavorfully frugal person is happy with little. You can even mop up with bread. Tonight, there will be just sea bass and persimmon, while the lobster will play it half-raw, half-cooked with a cream of cress, celeriac, and a few pistachios. Vegetables play the sides, natch: parsnips, turnips, carrots, stems, and leaves. A bit of bread, and wine, of course. No desserts.

And you leave the table at peace, clean, better. “Flavorfully frugal” is not a doctrine. It has no guide, no priests; it’s self-directed, goes where pleasure takes it. It comes, as always, from the belly, from the mouth, from the tactile; the brain is there only to observe, to smooth, to relax the body. The latter deserves an adjustment to the world, comprehensive measures. Leave the table when you want, call a halt, stay just a bit hungry. And then it’s home on foot, loosen up your ideas, breathe, go with your body. 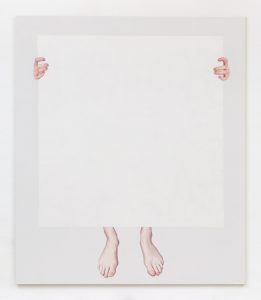