since 1948, alejandro jodowski has worked as a novelist, screenwriter, poet, playwright, essayist, film and theater director, producer, actor, film editor, comics writer, musician and composer, philosopher, puppeteer, mime, psychologist and psychoanalyst, painter, and “psychomagician.” He is best known for his avant-garde cult films, like the holy mountain and el topo

We consider the brain to be the organ that produces thought. We could also say, then, that the intestines, the flesh, the bones, and the stomach are part of the brain’s creativity.

Let us think only of the brain. We can consider it to be a being in its own right, with a finality to its existence. Is the brain us, or is it another? Is it that every human being has another being in their skull, which dedicates a tiny, tiny individuality to creating an ego and making us believe that this ego is us? As for the rest, what is the inconceivable phenomenon of matter?

They say the brain is the creator of a consciousness that is given to us like the grain to a plant, that, as we lead our experiences, it grows, gets bigger, wider. One can think that our goal, as human beings, is to have our consciousness grow, develop, to the point that we are aware of every neuron, that we know every neuron of this encephalic mass: maybe that would be our goal. It may be that we think we can reach it with mathematics, with meditation.

We may also think that, in a way, our brain is already complete: that our consciousness, with all its immense ability, is already ready in our head. If only we could exploit all the potentialities of our brains… It so happens that we have limits, acquired in our experience, from our birth: birth is a destiny, family is a destiny, society is a destiny, history is a destiny. The brain is marked with prejudices. One should eliminate all prejudices from the brain, all limits, whether religious, sexual, or moral. What would we end up with if we were able to eliminate all these limits: a free being. And that is possible.

It seems to me that we do not get to the bottom of things. Are the thoughts in the brain created by the brain? This is the sort of questioning one needs to gear toward. The brain cannot possibly be only a creating being. It can also be a receiving being. It receives thought as much as it creates it. The word “kabbalah,” in Jewish mysticism, signifies “what is received.” What is received is not the message of a god. It is what the brain receives from a higher place, which is not the brain, but a sort of aura that surrounds the planet, where all thought is. This planetary thought presupposes the union of all thinking beings, even with the slightest thought that is in a cell, even with the worm and the vermin. Minerals have a life that thinks.

Once you have this conception, you get to think that the Earth is simply a neuron in our galaxy. In fact, our brain receives all the ideas, all the thoughts that are made in our solar system, in all our galaxy. You could think that our solar system is a neuron of the universe in its full scale. You could reach even deeper inside the mysterious vacuity that is underneath all matter. Our brain, if well taken care of, if free, could sense things that we cannot even guess. In order to reach that point, you have to leave aside the ego, which thinks: “I do this, I like this, I think this.” You have to get rid of the self. What I am saying is by no mean original: the Buddha, after thousands of hours, reached the awareness of nonexistence. And that is meditation.

Prejudices are not only sexual, racial, moral, or religious. It goes even further. When I was told about Van Gogh, and I was told that Van Gogh put on an equal footing the inside and the outside, I was also told this was madness. Here, we touch upon another prejudice. If everything is one, if I accept unity, the inside and the outside do not exist, high and low do not exist, good and bad do not exist, light and dark do not exist. Everything fits, it’s a totality. In order to think, you have to get rid of every prejudice of thought that is established on dualities: cold and warm are the same phenomenon, only with differences in degree. At the end of white is black, and at the end of black is white. There is no periphery, and no center: everything is the center, periphery is just another degree of the center. There is no birth, there is no death: it’s a continuity. There is no past, there is no future. There is just the present. The entire creation cannot have memory. It might be that the brain was created to give the illusion of memory.

Woman and man do not exist: there are manifestations of the sexual force, which can take different manifestations. In every child, there is a thousand-year-old person. In every old thing, a new thing is being born. Everything is at once dying and being born. I am working on this question in Psychotrance, my new book. With these ideas, I aim to ask the question: who am I, when I am? If I am my brain, am I a mere receiver? I am not the maker of my feelings; they come, they burst. The making of love does not exist. One can learn to be good, but good exists in itself. Sexual desire is received, not made. Intelligence is received. The self, too, is received.

Let us talk about skin. They say skin is as much the brain as the brain. It seems as if I am locked in my skin. My skin has an outside, which will receive caresses as well as be cut by a scalpel. But the inside of my skin is the outside of the skin of the world. Everything I do inside of me is printed on the outside of my skin. Everything I have inside of me is felt as a knife or as a caress by the world around me. I am the receiver and the emitter of the world around me.

That leads to the question: if what I have is given, who gives it to me? Where does it come from? What is it? 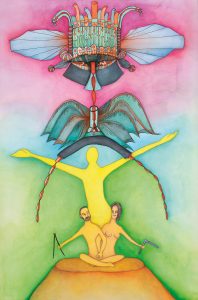