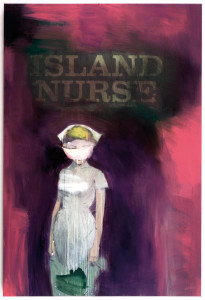 The collision of art and fashion has never been so direct. On one end, RICHARD PRINCE uses his visual signature to reinterpret the monograms on Louis Vuitton bags and accessories. On the other, Marc Jacobs transfers the Nurse paintings to the Louis Vuitton runway for a collection inspired by these famous pieces. Is this collaboration the end of an era or the beginning of a closer collaboration between artist and designer?

RICHARD PRINCE wrote me an email yesterday. “I can feel the dogs nipping at my feet. Backlash is lashing.” Yeah, I know, buddy. It had to happen. There’s no escaping the wrath of the satisfied customer. It takes guts to be a real artist. Given the current state of culture, almost anything worth doing is going to divide people along factional lines, and inspire pockets of venomous, virulent hatred. (See Newton’s Third Law of Publicity: For every cultural action there is an equal and opposite overreaction.) Modernist culture used to be so simple. Artists had only to amuse and/or move a relatively small circle of initiates, while demonstrating the ability to sufficiently épater la bourgeoisie and perplex the squares. But the world has become so enormously small since it networked itself up. The hinterlands got cable. The boondocks got wifi. Bluetooth bozos beam up from all over the planet. Thus, la bourgeoisie has become blasé, jaded, depraved even.

Meanwhile, the media, bred so long to eat its young and destroy what it perceives as its own creations, has become even more ravenous and spiteful. Who wants to be a great artist? Who wants to be thrown to the inbred lions? Who wants yesterday’s papers? Send those used celebrities to the shredders! The world demands novelty, and make it snappy. The cruelty of world-weary watchers of the sideshow has become titanic. (“Here we are now, entertain us.”) The Zeitgeist is so fraught with paranoia that as the successful artist seeks to feed the insatiable maw of the international, cannibalistic television eye, he must navigate with trepidation, or with the naïve and elastic steps of a fool.

Nowadays artists must be daring or oblivious. Or both. The art world punishes all those whose success offends. Not only will artists who make good work be hated by the philistines, they will also eventually be hated by the world that nurtured them, including the speculator

collectors whose unrealistic expectations of profit are even slightly unfulfilled — and also hated, of course, by their snarky, armed and dangerous peers. There are a lot of gunslingers in this town.

A hero in a plain brown wrapper. Throughout his fairly long career he has defied conventional wisdom of the market by switching styles as soon as they became somewhat recognizable. Not that this was actually strategic (or wasn’t) but the first duty of an artist is to amuse himself. Prince has pulled it off again and again, and his success has proved particularly tough on those among his peers who never had even one style. At a certain point the ace paintslinger knows that every snotty-nosed kid in town with a quick brush and a tub of gesso is out to wipe him off the canvas.

One obvious response to the mean and nasty world outside the studio is to extend the out-of-bounds lines. Who says where art starts and stops, anyway? The art world isn’t Chechnya or Botswana. Its borders are negotiable — fictional even. The art world wasn’t always as insular as it is today — the larger public used to watch and enjoy the shenanigans, even if they only hung reproductions. But what do you do when the paintings cost a million dollars? Let’s throw the question open to the audience.

I think it was a year or so ago that I heard an artist utter under his breath, “I hope I tank at the auctions.” Which is the equivalent of Abe Lincoln hoping not to be elected. But then, sometimes the wiser course isn’t the most obvious one. When paintings hit the multi-

million dollar mark maybe the best thing to do is bring out the handbags that sell for a grand or deux. They got the bad jokes. Let’s see if they get the good ones.

Art is art. Fashion is fashion. Art will never be fashion. Fashion will never be art. But that doesn’t mean they can’t fuck. Or fight. Or both! Who wouldn’t pay to watch that?

in-a-lifetime thing. It really couldn’t be duplicated or repeated. But medical science makes advances in longevity every day. Besides, something happened here. I smell smoke.

Put art and fashion in the same Thunderdome, and a double-edged beast emerges. Sort of like the giant muscleman body and tiny vicious brain who team up to run things in that Mad Max movie. It’s the cultural version of Master Blaster. (Relax. This is just a metaphor.)

What rough beast, its hour come at last, slouches toward Paris?

As for our hero: “In the roar of an engine, he lost everything. And became a shell of a man, a burnt out, desolate man, a man haunted by the demons of his past, a man who wandered out into the wasteland. And it was here, in this blighted place, that he learned to live again…” *