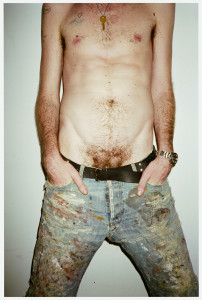 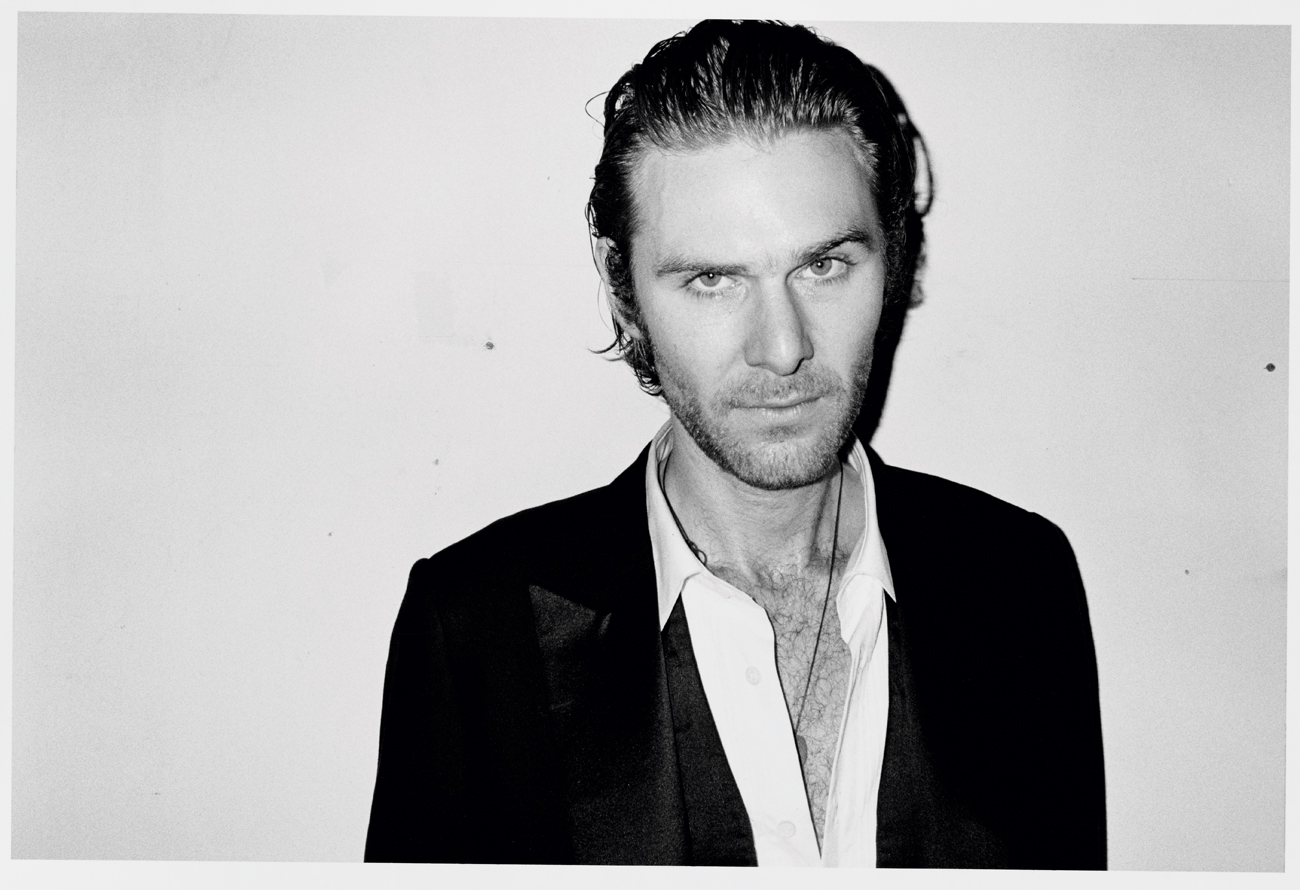 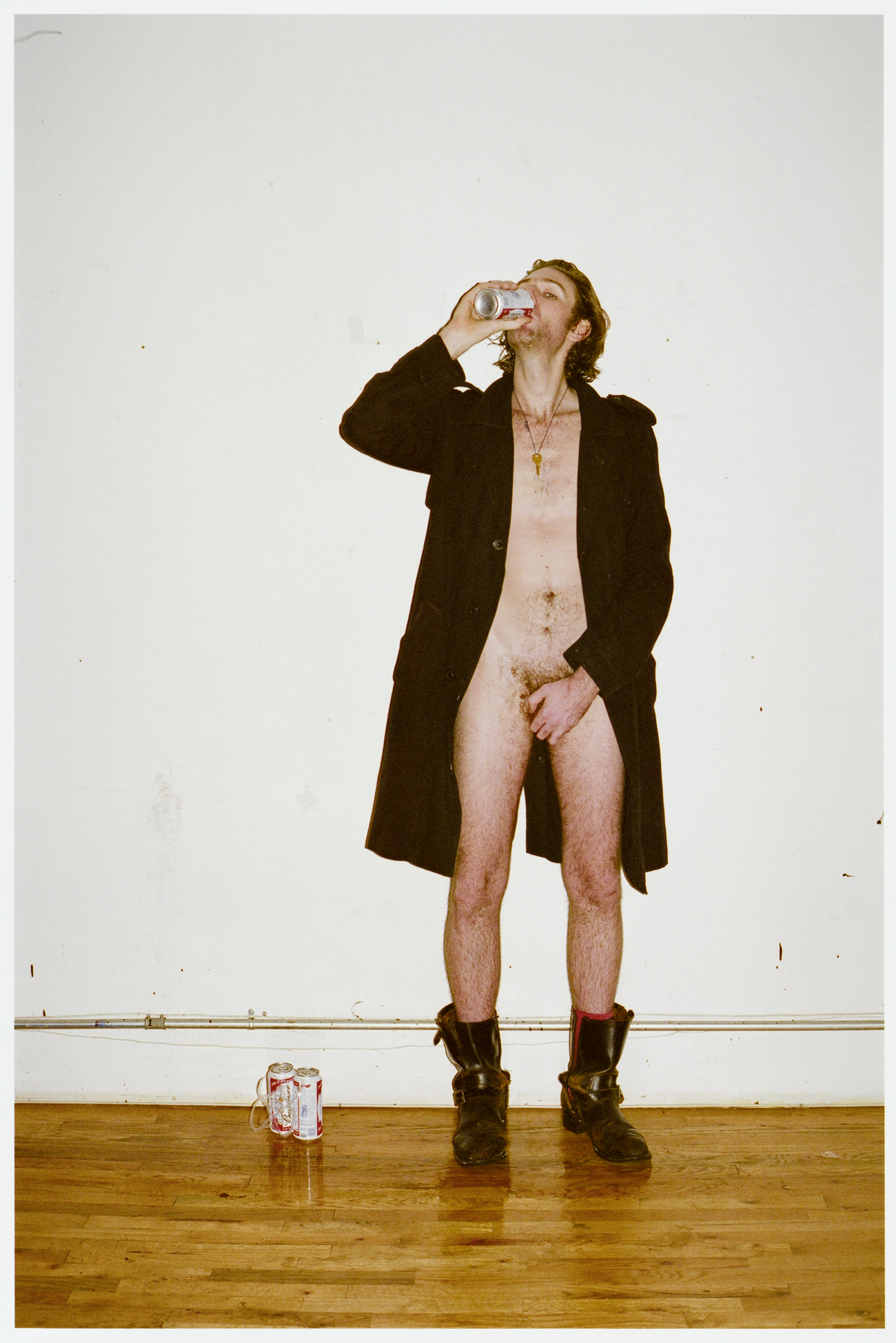 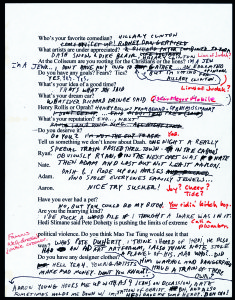 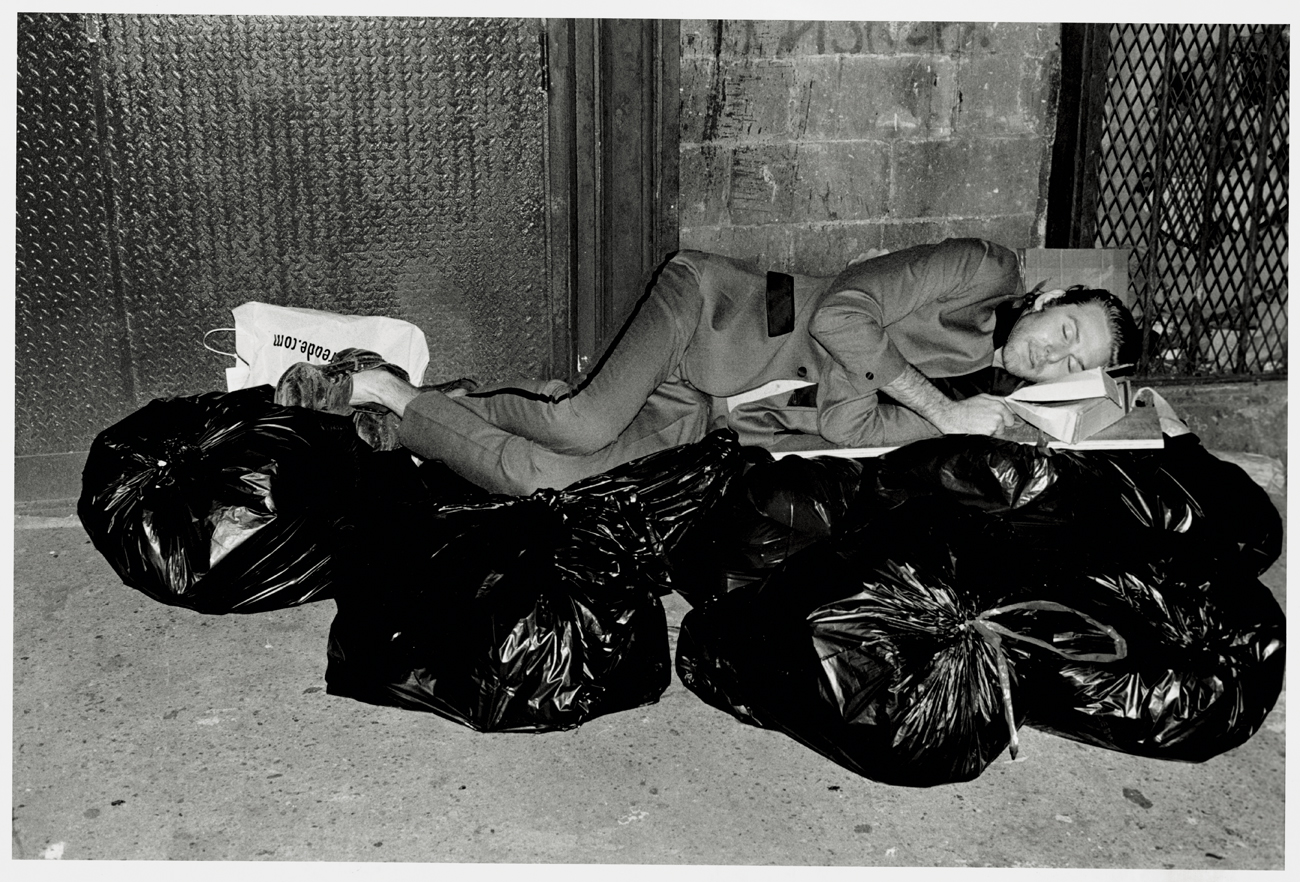 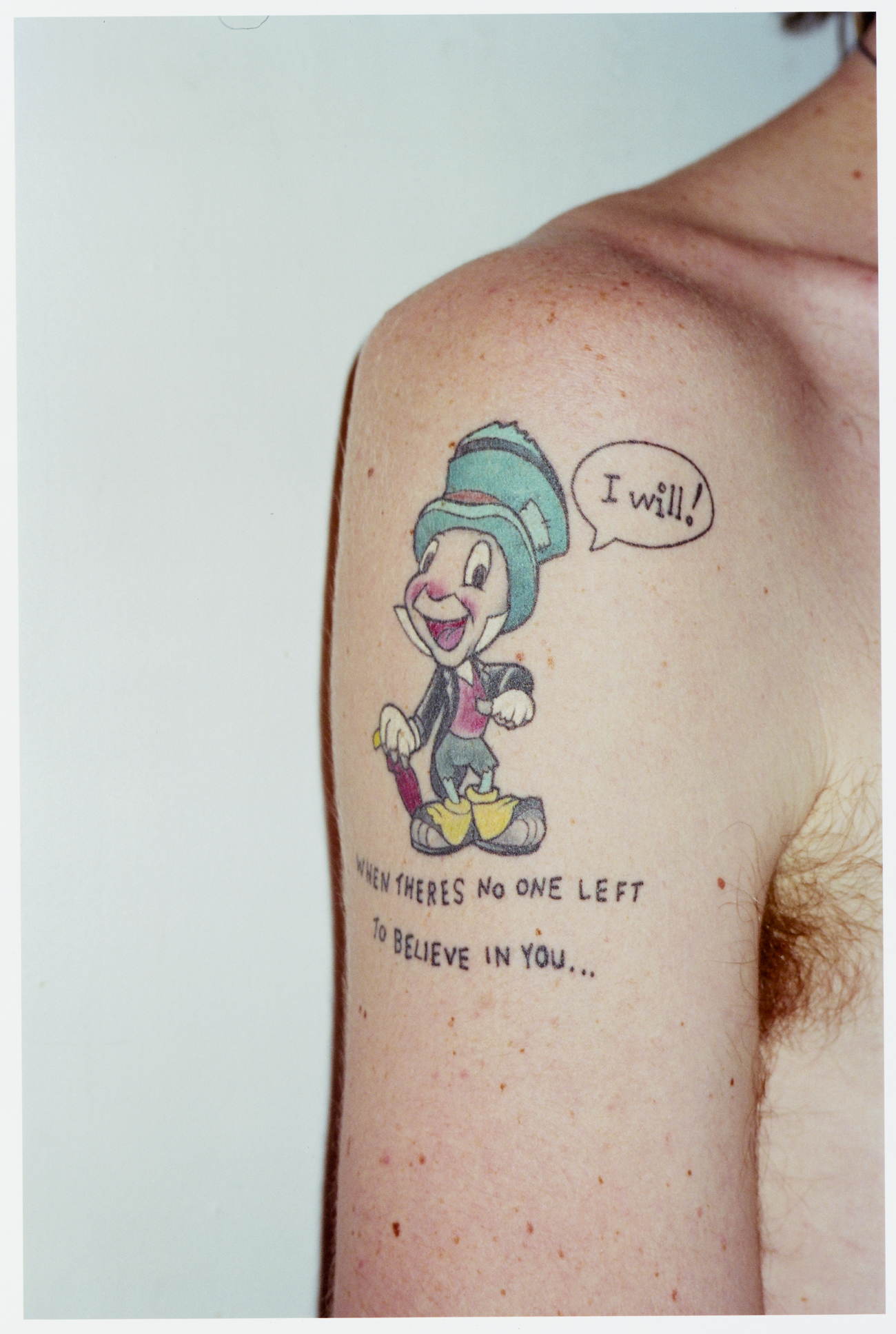 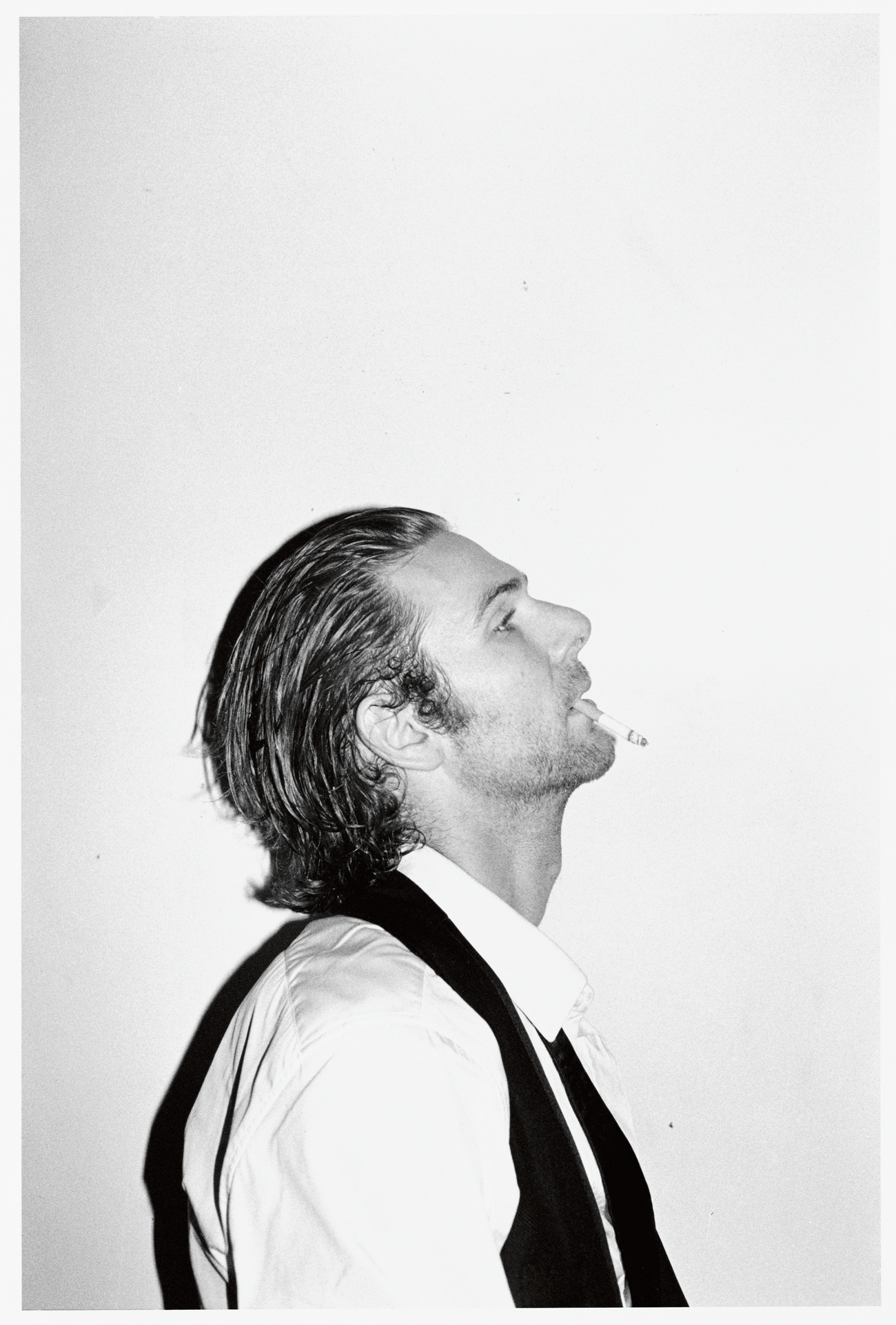 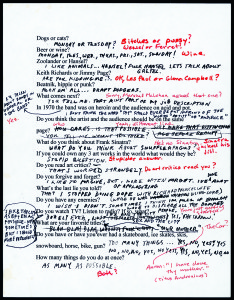 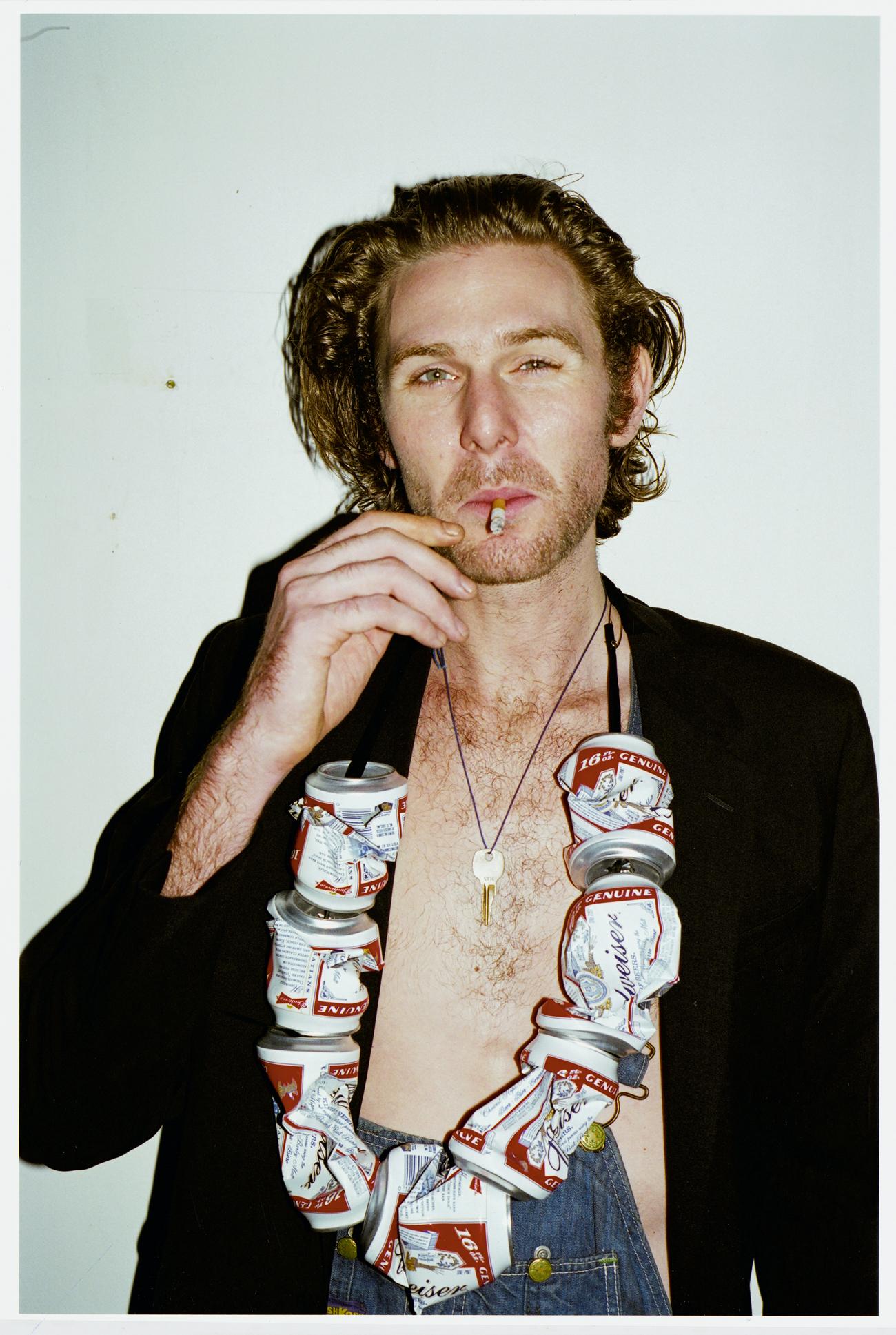 DAN COLEN, one of the most promising of the new generation of  New York artists, is here portrayed by three long time Purple contributors, all veterans of the New York art scene. Terry Richardson captures the young lion in his element; Glenn O’Brien conducts a fax-to-fax interview, and artist Dike Blair, Dan’s former professor at the Rhode Island School of Design, weighs in with his thoughts on his work. Three view points on a man who, along with his peers Dash Snow, Nate Lowman, Ryan McGinley, et al, defines Downtown New York art today.

THE COMBINATION OF ART AND FUN* is a strange cocktail, usually served-up only during flush economic times. People who look at art and artists tend to be divided up according to their attraction or repulsion to this pairing. Some people — like me — are in fact simultaneously attracted and repulsed. People who are attracted to fun in art are usually young — unlike me — and are often, in fact, part of the fun. Older enthusiasts only get a vicarious piece of the action. Among those repulsed by fun art include art world moralists who consider the making of art a mission of spiritual sanctity or political righteousness. Old fun art artists and promoters rendered passé by young fun art artists and promoters also find themselves less than delighted.

Dan Colen and his friends (who include Ryan McGinnly, Dash Snow, and Nate Lowman) are young and attractive. They take lots of drugs and have lots of sex. They appear to be having a lot of fun and they play at appearing to have a lot of fun. But they’re not stupid, even if they’re super-attracted to stupid things. They realize their insouciance can lead to critical dismissal of their work — they’re well aware of the arc of celebrity. One thing that Dan does really well is flirt with that potential of dismissal, by incorporating it into his art.

For those unfamiliar with Dan’s work, here’s an abbreviated inventory, as the images in these pages constitute somewhat of a unique project. (Dan is constantly creating, or adopting and adapting, new formats.) Earlier on, in what is purely a 21st century career, Dan made pop-surreal- photorealist paintings with dramatic lighting — kind of de La Tour meets Dali meets Disney. Later he sculpted faux rocks and covered them with simulated graffiti and chewing gum. He meticulously crafted a diorama of his friend Dash Snow’s studio wall; this ambitious tableau includes trompe-l’œil paintings of tabloid newspaper clippings. He shot straight photographs of accumulated birdshit that are highly painterly and look like juicy Cy Twombly or Larry Poons paintings. He has also used oil paint to carefully simulate birdshit, creating lyrically evocative and lovely pictures. He has detourn-ed found paintings, embellishing them with jottings and images. He showed these in the toilets at Larry Gagosian’s gallery. A couple years ago, Dan and Dash made a kind of hamster nest of torn phone book pages in a London hotel room. Last summer this gesture was formalized into a sleepover performance/installation/happening at Deitch Projects.

All of Dan’s work reads like a raspberry to the art world — and a valentine to art and art history. His stuff is openly derivative of a lot of other art and artists, and the transparency of his borrowing is refreshing. His influences are many, but fairly easily plot in a line from Andy Warhol to Richard Prince to Wade Guyton and Kelly Walker. He’ll grab anything. Fragonard is there, as are Disney and Thomas Kinkade. There’s very little that Dan won’t consume and redeploy, and promiscuity is part of the point; he and his friends swap each other’s images and styles like so many Pokemon cards. There’s a quality of fantasy to his appropriation — like a kid rummaging through his parents’ closet and trying on their clothes. It’s in the blatancy of the borrowing, the re-appropriation of appropriation art, that hubris and humor lurk. Many postpop artists try to sweep away the footprints that lead from Andy’s studio to theirs; Dan puts up signposts. But none of all this would work, of course, if he didn’t bring something of his own to the table.

One of the things I really like about Dan’s practice is how he messes with assumptions about the value of invested labor. He’ll use a sketch that an illustrator he employed took 30 seconds to make. Then he’ll spend four months burning the midnight oil painstakingly painting the final layer of Giuseppe’s workbench candle. Signs which say things like “Holy Shit” and “Rama Lama Ding Dong” look as if they took him 20 seconds to spray-paint but are in fact meticulously painted by hand. He dedicates a lot of time to executing and fine-tuning extraordinarily banal things. There’s an element of Koonsian fetishism and critique about it all, but Dan doubles up his bet by (sometimes) investing massive amounts of labor into things that (sometimes) look like shit.

The sheer pleasure Dan takes in presentation and representation and re-representation is what ultimately wins me over. He’s very generous in displaying his life and art, and one can feel the delight in this display. There’s also the somewhat stupid yet sublime pleasure of representing something really well. Every sixth grader who draws a reasonable facsimile of Spiderman knows this pleasure, and his peers never fail to marvel at the magic of such specific skill. Such pleasure gets complicated and harder to achieve as the artist ages and enters the contemporary art world and eventually the history of art. But I’m sure that Gerhard Richter still feels it, when finally gets his glowing candle. I know Dan feels it when he nails one of his Disney candles. And I know I marvel and get pleasure from looking at the skill of his re-representation. When I add that to the pleasure of watching all the fuck-you moves and canny stupidity of the work, I find it all very entertaining and intoxicating. And fun.

* My dictionary defines fun as something that provides enjoyment or amusement and/or involves playful joking, often at the expense of another. I’ll expand that a bit and describe “fun art” as an art that necessarily includes elements of a “scene” and, as such, has a strong relationship to fashion and publicity.