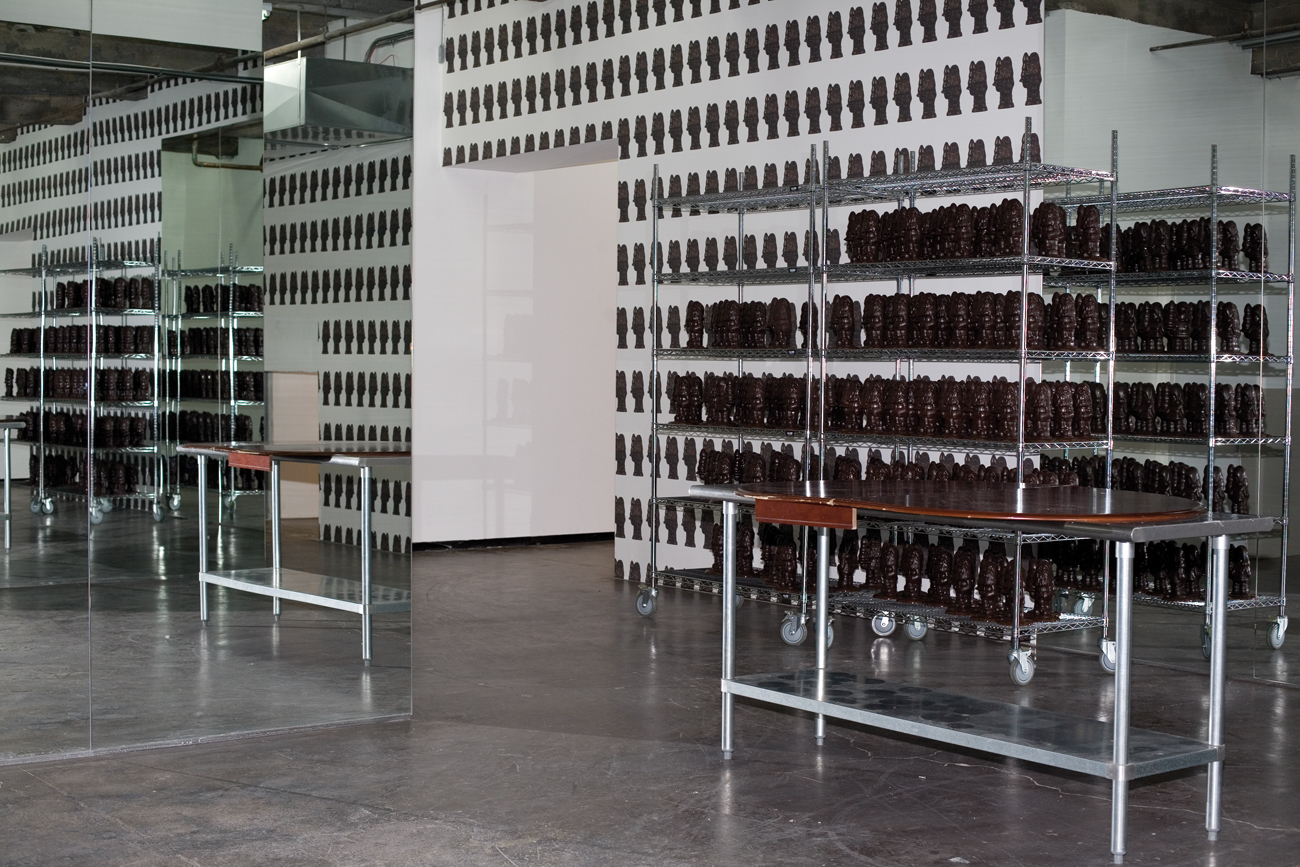 On november 19th I attended the opening of a chocolate factory in Manhattan’s West Village. There are many independent producers of gourmet sweets in the city, but I don’t think there’s ever been one like this. The Peter Paul Chocolate Company is engaged entirely in the manufacture of ten-inch, 14-ounce chocolate Santa Claus figurines. Each of which holds a butt plug approximately five inches in length. The company manufactures approximately a thousand Santas per day. They sell for $100 each.

This might seem like a stiff tariff for a piece of candy, but it’s made of premium chocolate produced by E. Guittard, the 140-year old luxury chocolate-making firm, using only pure natural ingredients. The Santas are also kosher. Still seem expensive? Well, it’s also art by a famous artist. Doesn’t it seem cheap now?

The Peter Paul Chocolate Company was founded by artist Paul McCarthy in collaboration with The Maccarone Gallery, which provides the 6 000 square foot space where the company’s factory and store are temporarily located. The opening of the factory was actually an art opening. And I must say, I have never seen people, of all ages, having so much fun at an art opening.

Paul McCarthy is a 62-year old artist who lives in Los Angeles, California. Over his long career he has created many performance works, as well as an extraordinary body of art objects, and has become a true artist’s artist. He’s no easel painter and he’s never taken the easy way out. His subject matter is usually taken from the fringes rarely explored by art: fast food, incest, squalor, bestiality, sadism, and scatology. His black comedy verges on the shamanic. Whereas Jeff Koons deals with the nice, McCarthy deals with the naughty. He consistently amplifies the dark side of the daily dosage of cultural pap dished out through the usual sources, and strikes a perfect balance between horror and amusement. He takes the suppressed part of the American dream — the Beyond the Valley of Freudian Subconscious — and turns it into a madcap funhouse. McCarthy’s world is bloody and shitty and messy. So it should come as no surprise that two of his favorite materials are ketchup and chocolate, both of which have been used by him to great effect. But the chocolate factory is uniquely effective, because it’s a real chocolate factory. For once the artist has played it close to the vest.

We expect McCarthy to be over the top, beyond our wildest imagination, but everything seems normal here. Behind glass walls there’s a real chocolate factory in operation, with immaculately clean stainless steel mixers and spinners. All around are racks of large chocolate Santas being ogled by children and filling the air with an almost irresistible aroma. In the back room there are busy bee workers wrapping the Santas in boxes.

The chocolate factory had a long gestation period. In 1972 McCarthy did a piece in which he covered himself in chocolate pudding. “I don’t know where shit in art appeared. It probably goes way back,” says McCarthy. “The subject of shit appeared in about ’74 or ’75, so I guess chocolate as shit appeared in my work around then. But there was always also chocolate used just as chocolate. I used it in a performance piece called Tokyo Santa and Santa Chocolate Shop — Santa Chocolate Shop had a lot of chocolate.”

McCarthy was one of a select group of international artists asked to contribute a piece for the Hanover World’s Fair in 2000. McCarthy recalls, “Each artist was going to get about $300,000 for his budget, which was pretty big money at the time. They expected 50 or 60 million people to come to the fair. I had the idea that if there was going to be 50 million people there then maybe I should make something to sell, and make 25 cents off of each one. Right at that meeting I had the idea of doing a chocolate factory.

“They were really supportive of the idea, but when we tried to do it we ran into contractual problems. People had already been contracted for food manufacturing on the grounds and I would have had to do it through them, so eventually the factory idea was dropped. But we did all the research on chocolate manufacturing. That’s when I learned about the spinners and the melters and the coolers and all that. I really got into the machines and the whole process. I ended up making a big inflatable Pinocchio figurine, which might have been the figure I would have made for the fair. A premade chocolate bar in the shape of the nose of the blockhead, a cylinder nose, was sold in a box from a vending machine inside. It was called The Nose Bar and was made of milk chocolate. I’d guess we made about 30,000.

“Even when I was planning on making 25 cents each off of 50 million people it was always a joke to me. I couldn’t really imagine 50 million people buying a candy bar, but I liked the idea of making a production facility to manufacture them. Ultimately, I wasn’t interested in the profit margin. I was interested in making a factory as a sculpture that makes a sculpture. It’d also be a factory people worked in, as a kind of theater. It was always about art and not about money. I’m more interested in the idea of a company as a failure. Everything I’ve ever done like this has been dysfunctional. I’m interested in dysfunction, so I knew I was going to sabotage it somewhere along the line. It was a complete failure as a company but it worked as art. It was sort of an icon or a mascot for the fair.”

McCarthy put a lot of thought into the idea of the chocolate factory and fell in love with the idea of making a sculpture that made sculptures. He remembers, “I had the idea of doing it in a gallery. I’d set up a chocolate factory in a gallery and it would make a thousand figurines a day and eventually clog up the gallery. It was all about producing figurines that eventually would be in the halls, on the desks, in the bathrooms, everywhere. It was about clogging the space.

“I didn’t really know anything about chocolate or chocolate factories,” says McCarthy. “I knew I wanted to make a thousand a day and that I wanted the figurine to be large. I also knew I would have to hire a crew. I didn’t know if I’d need real chocolate workers. I didn’t know whether we’d get the permits from the city or do it guerilla style. Should I do it as a business? I wasn’t sure how concerned I should be with selling — should I even try or should I just make the thing? It could have gone either way. I’m not sure which way is the more interesting — not even trying to sell it or making a mass edition. The direction I took was pseudo-business. We set up a factory, packing facilities, and a shop, all to city code. That meant rubber floors, and a certain isolation from the public. We even actually incorporated, got a license, and advertised. But I knew it would ultimately produce more than it could possibly sell.”

McCarthy advertised in the December issue of Vanity Fair, of all places. Just a picture of the Chocolate Santa — there’s no mention of butt plugs. I somehow doubt that butt plugs have ever been mentioned in Vanity Fair. But there it is, big as life, and in chocolate. The model for McCarthy’s chocolate Santa is a 24-meter high bronze one he made for the City of Rotterdam, entitled Santa with Butt Plug. The chocolate versions are entitled Santa with Christmas Tree, but they aren’t fooling anyone. That smooth, conical wavy thing doesn’t look at all like an evergreen. If anything, it looks like an Arp sculpture, which is what attracted McCarthy in the first place. But it is, in fact, a butt plug.

Oddly, the less the Santas sell, the more McCarthy likes it, because overproduction means chaos in the factory. He also likes what if references. “One side of the art world is the gallery as a type of shop that sells sculpture or figurines. You have figurines selling for huge prices — $22 million for a Koons. It’s an object you walk around. It sits in the middle of the space. These things need the context of the gallery. They’re not contextual in a life sense. But I’ve got a shop and I’m making figurines. There are a lot of different things going on in the art world. One of them is the production of statues and figurines. So my shop is a metaphor for the art world. I think this obsession with figurines is like constipation. It cancels out so much, this idea that the value of art to a culture can be locked up in a statue or figurine or in the rectangle of a painting, and be internal to these things, and that’s it’s unnecessary to get messy and include life….”

There was a moment at the beginning of the life of Pop Art when it seemed to contain a  genuine populist spirit. Today, however, multiples are not in favor. The appeal of the original unique work is bigger than ever. The precious object that speculators prefer dominates the art world. But McCarthy offers an alternative. Not only an edition — an edition gone hog wild. The idea is to make as many as possible during the run of the show: to overproduce to the extent that production destroys the means of production.

And the medium, of course, is chocolate. “Chocolate is the opposite of stainless steel,” says McCarthy, drolly. He likes the problems that presents. You can eat it, but then it won’t appreciate. If you keep it, inevitably nature will reclaim it. Chocolate “blooms” and turns white. In any case, this is not an archival work. “I could give them away, I guess,” says McCarthy, “but then they wouldn’t accumulate.”

The Peter Paul Chocolates Chocolate Santa exhibition closes on Christmas Eve, but McCarthy says it’s not the end. “I own all that equipment. It will go on. It’s just a question of where and when.” Of course, someone could come along and buy the factory itself, as a “franchise.” But I think part of the deal should be the obligation to keep it going, and continue to fill the world with more and more Santa with Butt Plugs.

The more you think about it, the more fascinating this model of art becomes. I guess there’s a place for a $23 million heart, but it’s not my place. But eating a $100 Santa with Butt Plug — well, that would make me feel closer to art. Like I was a part of it, or it a part of me — for a few hours, anyway. I love the idea of art as out-of-control production — production that shuts down and creates a happy sort of chaos. Now you see it, now you don’t. That’s magic. That’s life.