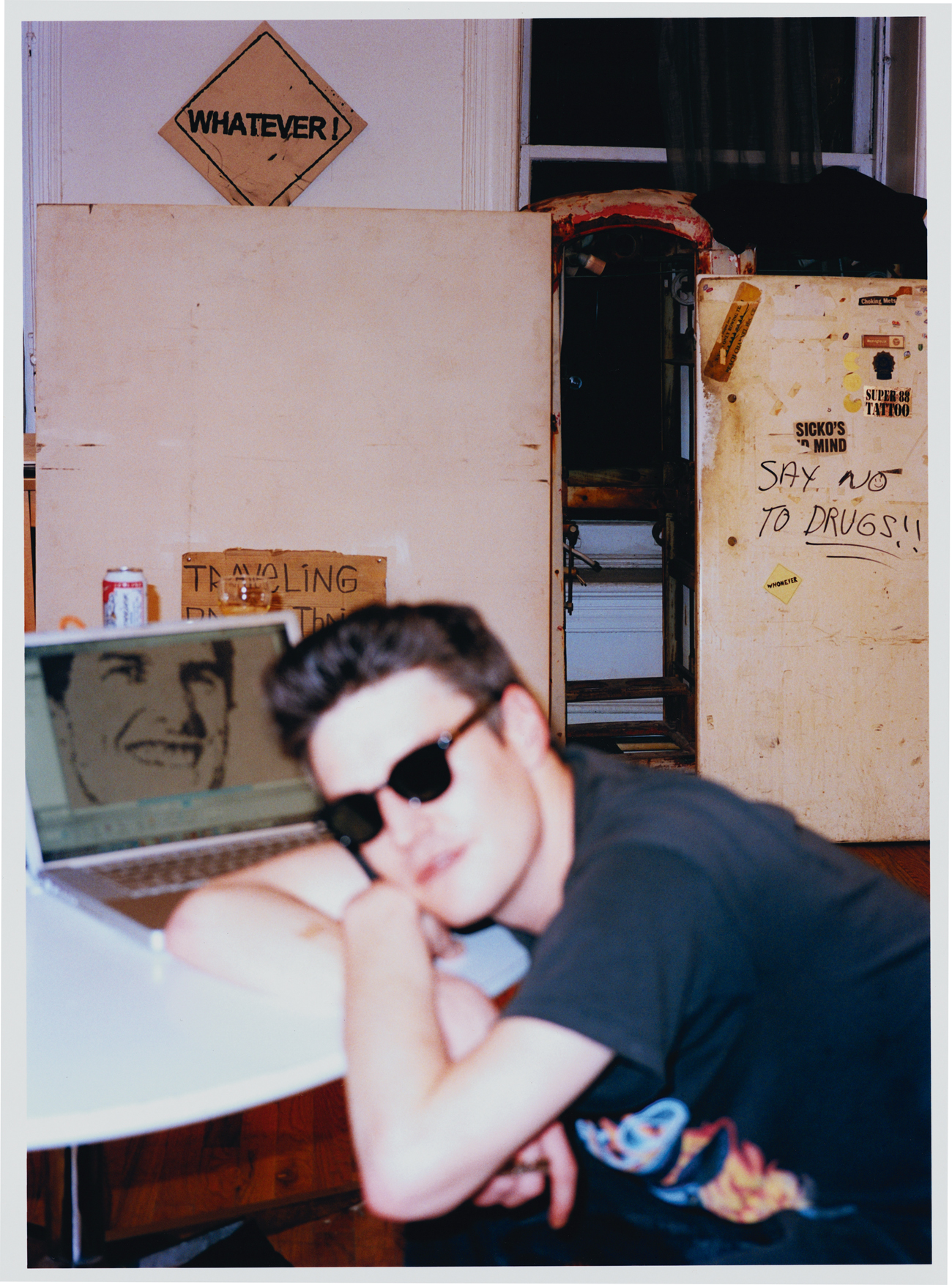 At the inaugural show of the new New Museum on the Bowery, Nate Lowman proved — at point-blank range — that the word “bulletproof” can be a misnomer. The 28-year old artist installed three prefab bank teller windows, complete with money trays and metal speak-through grills. Then he had gun geeks he knows blow the safety glass to smithereens. For anyone who has ever had to deal with a power-starved bureaucrat at the DMV car impound lot, Lowman’s sculpture was revenge fantasy of the highest caliber.

BILL POWERS — What are you working on these days?
NATE LOWMAN — A wall collage of before and after pictures — a baby getting corrective head surgery, cutouts of celebrities, a 13-year old girl who becomes a meth head. Stuff like that. I’m weaving Jane Fonda through the whole thing because she’s like the OG shape shifter. I mean, Madonna did it really well in a commercial way — reinventing herself, that is — but Jane Fonda murdered it first.

BILL POWERS — This photo of you in Purple — is it a before or an after picture?
NATE LOWMAN — I hope it’s a during picture. Like the one that captured Zidane head-butting the Italian guy in the World Cup. That was beautiful.

BILL POWERS — You also made a sculpture using discarded gas pumps.
NATE LOWMAN — I was in a show that memorialized the war in Iraq. A weird premise, and kind of twisted, since it’s not over. It’s a never-ending war. They asked the artists involved to propose monuments to the war. I found a gang of bombed-out gas pumps, and shipped them to London for the show. I leaned them against the gallery wall, almost like McCracken pieces.

BILL POWERS — Every time I see you, you’re always wearing the same Mickey Mouse sweatshirt. Do you have a sentimental attachment to it?
NATE LOWMAN — No, I just found it. I really like how this Mickey is missing his arms and legs. He has the gloves and the big shoes in the right spots, but they’re not connected to anything. It’s dark. Like the dark side of Disney. It’s me working out some shit from my childhood, I guess.

BILL POWERS — What’s the first thing you remember?
NATE LOWMAN — I was born in a snowstorm in Las Vegas on February 1st, 1979. My dad bought food at McDonald’s for just about every nurse in the hospital. This isn’t a memory of mine, though. My mom gave it
to me.

BILL POWERS — What would you like done with your remains after your death?
NATE LOWMAN — Maybe to have them scattered over the “castle” in Joshua Tree, where I blacked out from four hits of acid and a bottle of Chianti when I was 17. I woke up vomiting and thought I’d seen God. And she was a fox!

BILL POWERS — Where did you lose your virginity?
NATE LOWMAN — In the photo darkroom at my high school. I remember a Patti Smith song playing in the background, with her screaming, “nigger nigger nigger….”

BILL POWERS — Tell us about the best vacation you ever took.
NATE LOWMAN — Life’s a beach, and then you die.

BILL POWERS — Who is the worse influence on whom — you or your studio mate, Dan Colen?
NATE LOWMAN — What do you mean, “bad influence?” Are you suggesting I’m damaged?