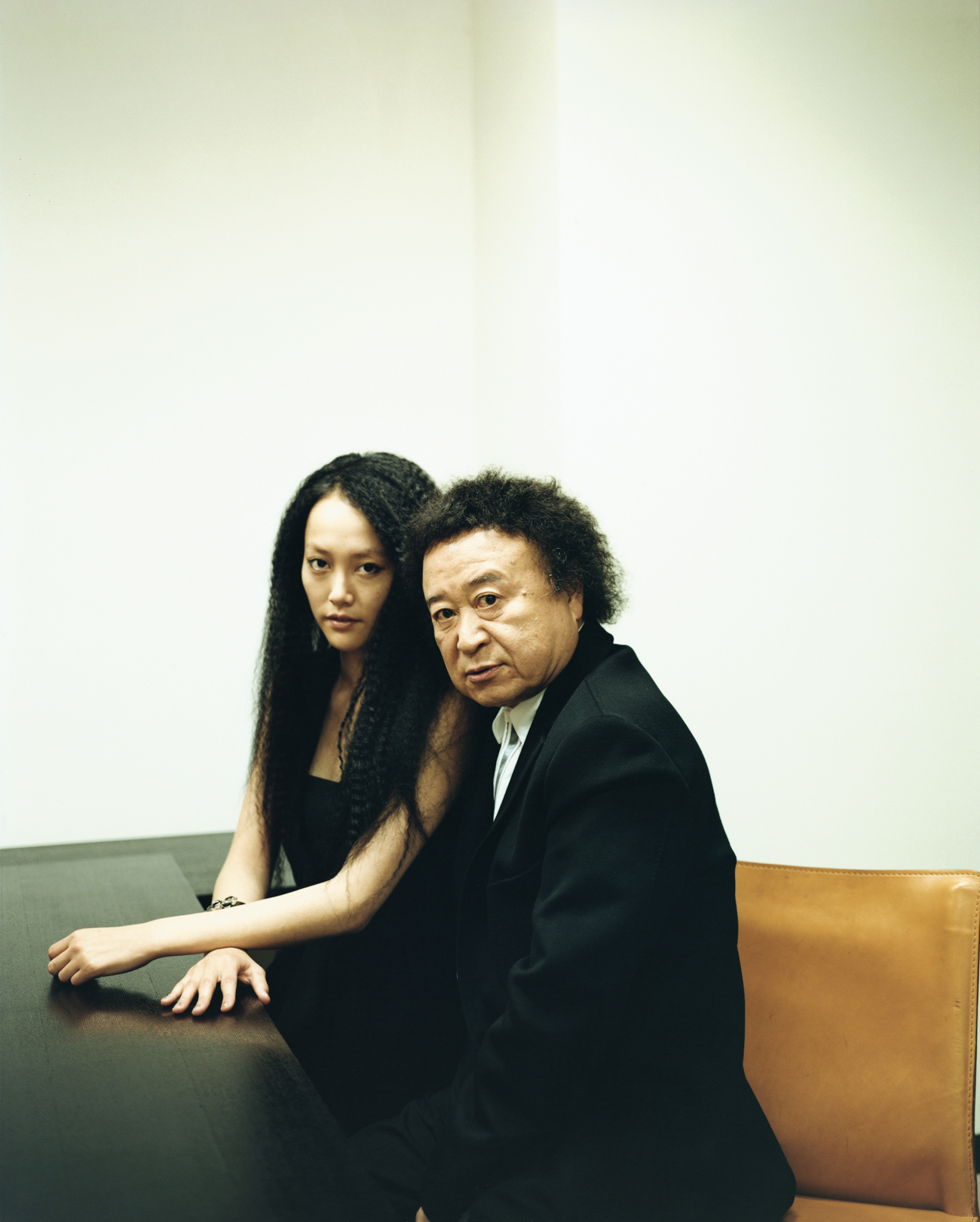 Since the sixties, legendary Japanese photographer KISHIN SHINOYAMA has been photographing nudes. Highly respected by younger generations, he remains innovative to this day, continuing to create wave after wave of cult images — such as John Lennon and Yoko Ono’s kiss for their Double Fantasy album. The young actress Rinko Kikuchi, nominated for an Oscar for her performance in Babel, asked him to work on her first book of portraits, some of which are published for the first time here.

EKO SATO — In every decade that you’ve worked in, you’ve reinvented the vocabulary of the nude. How did you first approach this form?
KISHIN SHINOYAMA — The first time I shot a nude was as an exercise in style, back in 1961. Several students in my photography class surrounded an unclothed woman. We approached it as one would a drawing exercise. There was no communication with the model. We just sought her form. The human body’s charm is revealed as soon as it is unclothed. This is what interests me. My photographs from this session were published in a magazine under the title “Human Form.” I was very surprised that my first nudes made it into a magazine. 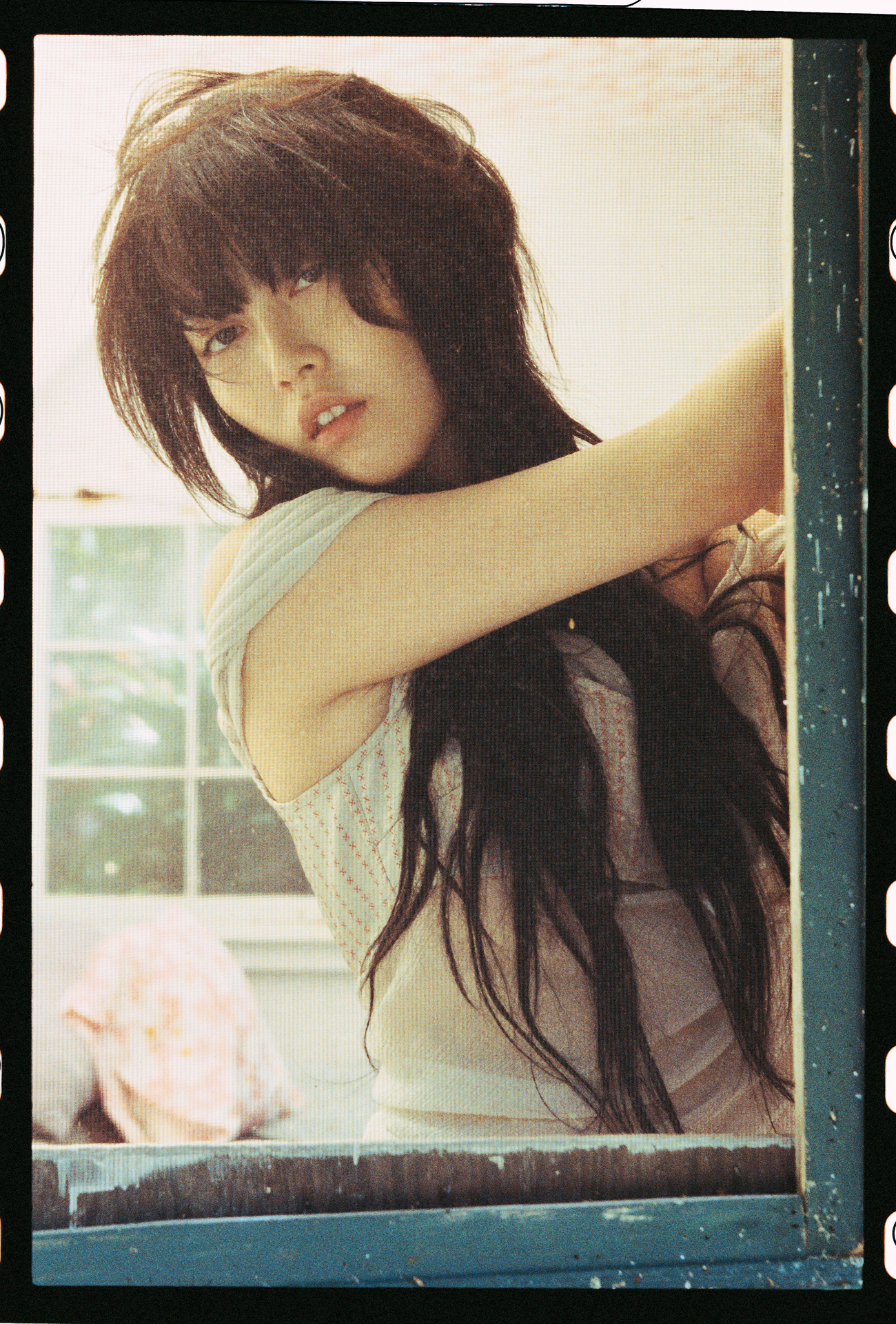 EKO SATO — In 1968 and 1969 you worked on the black-and-white series, Nude, which was shown at the Galerie Jousse Entreprise in Paris last October. In these photographs, lines are curved, graphic. One discovers a sculptural esthetic. How did this approach to the nude evolve?
KISHIN SHINOYAMA — At the time I was shooting photographs in unusual places, using wide-angle lenses. I took atypical poses in a surrealist manner. The idea was to capture the strangeness of the person and the body, calling into question common sense and normal expectations. These photographs were strong visually. Today I photograph both well-known and unknown people, and I work on revealing their lines, characteristics, personality, and talent. I’m interested in accentuating and extracting — bringing out the personality of the model, and creating a new personality, something photographically original. I don’t like photographing people who don’t like being photographed. I don’t enjoy creating a personality that isn’t there. Everyone has a story: his or her own life. I capture the power, the Eros, and the character of the body. I photograph the interesting and the unusual. Then I amplify it, shrink it, and express what I want to reveal.

EKO SATO — One of your series of nudes is called The Birth. Was it also the birth of Kishin Shinoyama, photographer?
KISHIN SHINOYAMA — Yes, absolutely. Up until then I took relatively commercial photographs for magazines. The Birth was the first series I completed for exhibition purposes. The photographs were taken on the remotest Japanese island to the south of the mainland. I employed five models for a week, which was expensive and a lot of work. But in terms of an artist’s production, one could say these were my first pieces.

EKO SATO — These pictures revolutionized nude photography in Japan.
KISHIN SHINOYAMA — The response was very positive, with photography magazines and art critics all chiming in. 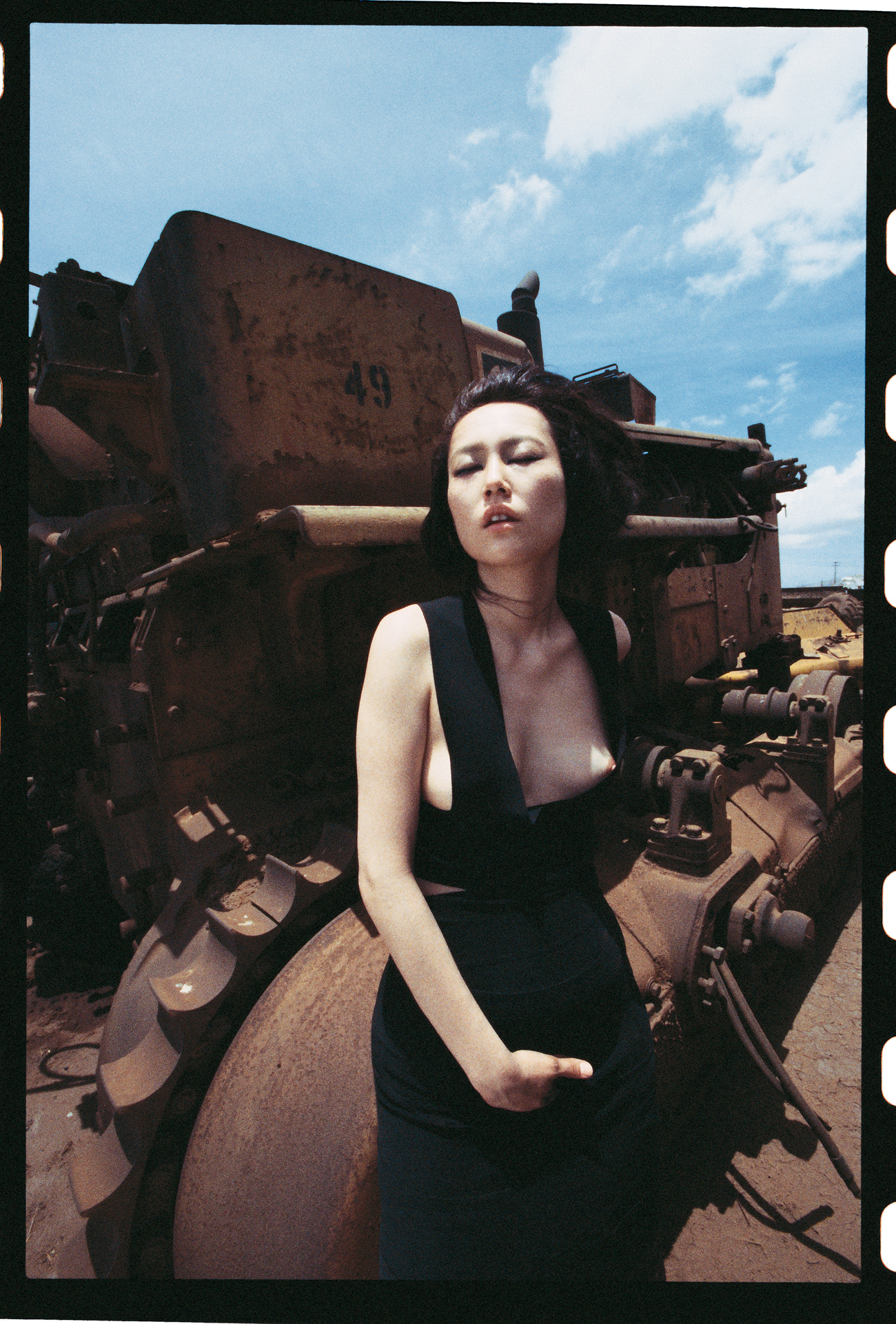 EKO SATO — People in Paris discovered the Shinorama series at FIAC. Many collectors were enthusiastic about it. Your approach changes with this work. Naked bodies of women are no longer the main subject — they’re symbols of the decadence of the 1980s, a period of economic boom.
KISHIN SHINOYAMA — We were indeed living in an economic bubble when I was working on the Shinorama series, and it was a peculiar time. Things would be torn down in order to be rebuilt. New places and buildings were popping up at a frenetic rate. Many things were happening at once. I came up with the idea of photographing several scenes in the same place, using one or more cameras, to create a panorama that technically presented the tricks our notions of time and space can play. And by inserting unrealistic nude characters I portrayed a perplexing Tokyo during a strange time.

EKO SATO — How do you photograph nudes in Tokyo today?
KISHIN SHINOYAMA — The capital is always evolving. In order to capture the moment of Tokyo’s present reality, I like to let young women loose in an environment that symbolizes the city. It’s not a technical question. The idea isn’t to use the “Shinorama” technique (of panoramic photography) or have women posed in front of the newest building in the city. The idea is to merge, to create a struggle between today’s woman and the Tokyo of today.

EKO SATO — What is your process of photographing nudes?
KISHIN SHINOYAMA — The very first thing I do is meet the model. If I’m dealing with a celebrity — an actress, for example — we talk about her creative frame of mind, and come to an agreement. I also organize casting calls on a regular basis for students or adult video actresses, young women who are willing to be photographed in the nude. I study their personalities. In either case, the idea is not to impose a photographic construction and use the model. The model is a source of inspiration. 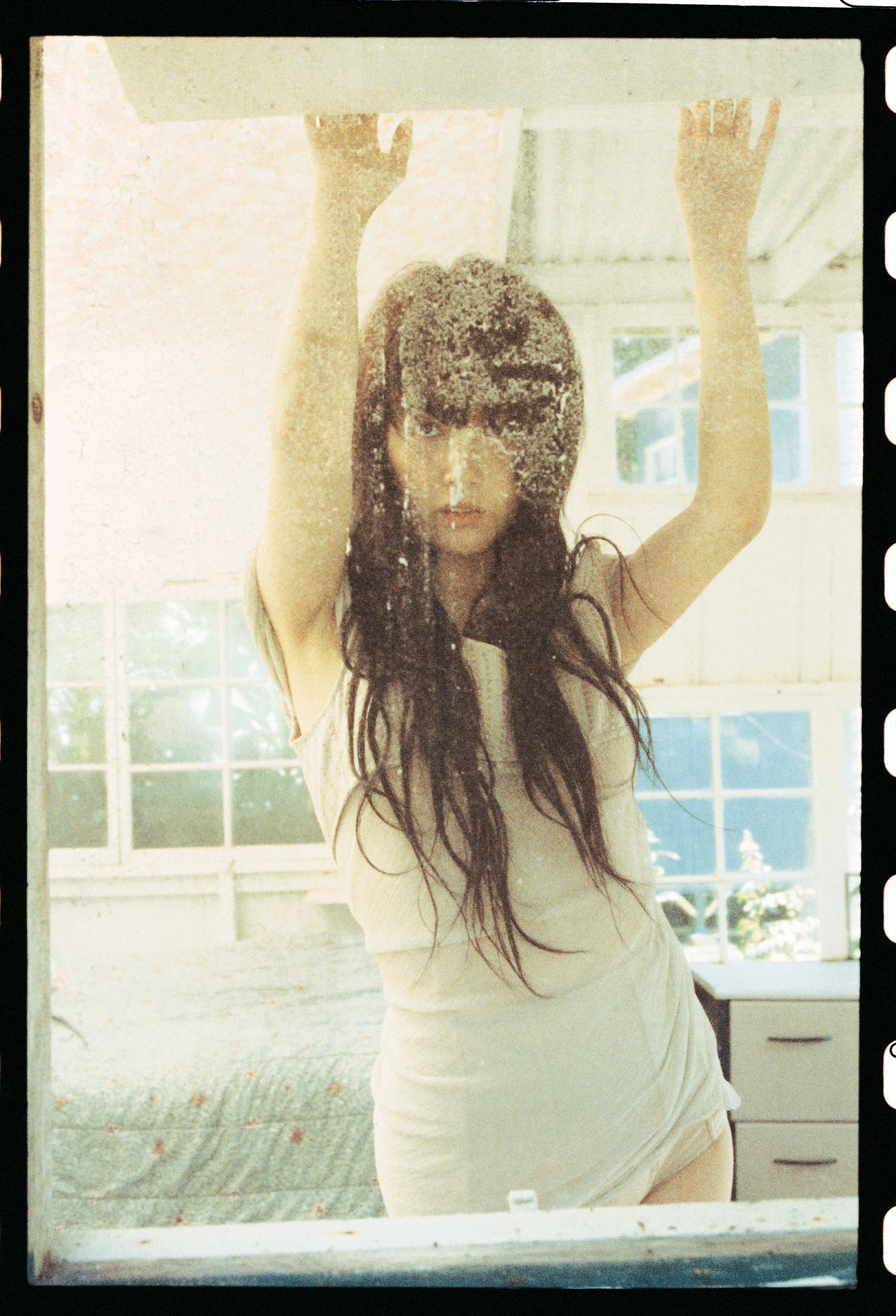 EKO SATO — Talking about inspiration, which photographers do you appreciate and respect?
KISHIN SHINOYAMA — There are many photographers whose talent I respect, if not always in an absolute way. Richard Avedon in the 1970s. Irving Penn. Bill Brandt, for his angles. Brassaï, for his photographs of Parisian nightlife. I’m interested in photographs taken in a defined environment at a precise moment. Whether the artist is known or not means nothing to me.

EKO SATO — You launched the concept of “Gekisha” by photographing little Miyo (the girl next door, the girl nobody knows) in the nude. You were also the first Japanese photographer to democratize hair, which until that point had been forbidden.
KISHIN SHINOYAMA — Yes. The press called it “Hair Nude.” With hindsight, I realize that in every decade I created keywords that set off the press and caused an upheaval. 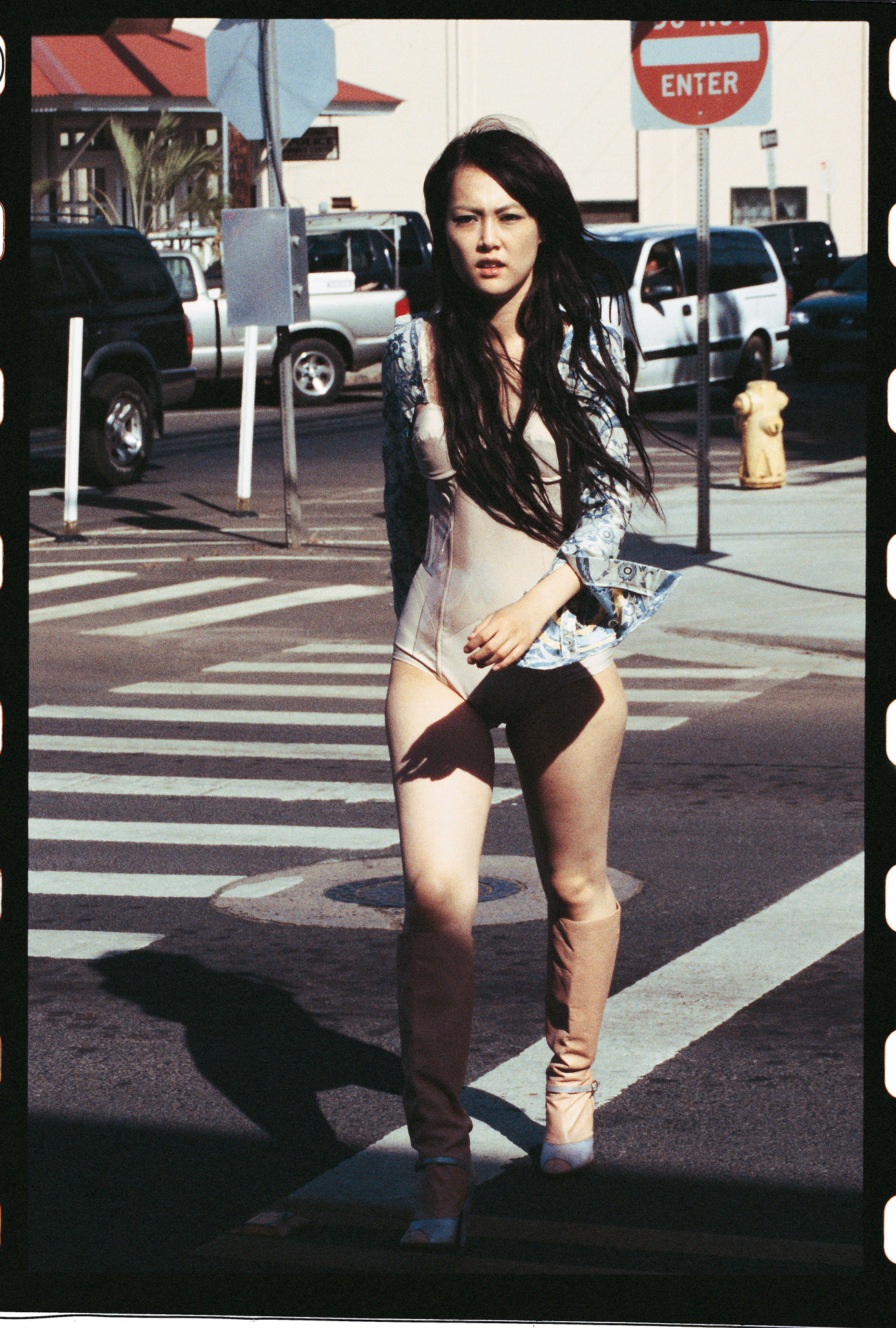 EKO SATO — Tell me about your latest book, Rinko, from which some of the photographs shown here are taken. Rinko Kikuchi is one of the top five new stars emerging in Japan, and once again you’re the first to make a book with an “it” girl.
KISHIN SHINOYAMA — Rinko Kikuchi has a strong personality and a real presence.  I chose a place that matched her character — an extreme, excessive, and daring place.  I photographed her personality, which surged out of the strong lights and darks of Hawaii, and by pushing the ASA of already highly sensitive film I pushed the image as far as the grain would allow. In the past, Japanese women were essentially passive. They had an extremely soft and graceful sex appeal. Today women are more active and aggressive. Rinko Kikuchi is very contemporary in this way. She didn’t have a vague, polite relationship with me. She challenged me. It was like a sword fight. This gave shape to a new form of eroticism.

EKO SATO — In your book you explore the actress’s many facets. She’s at once provocative, poetic, and chic-erotic. A diva. What is your view of porno-chic?
KISHIN SHINOYAMA — Porno-chic makes total sense to me. The basis of the form is eroticism. When an era reaches the limits of “esthetically correct” expression, we evolve towards what all people have from the outset: Eros. So the return to Eros seems natural to me. 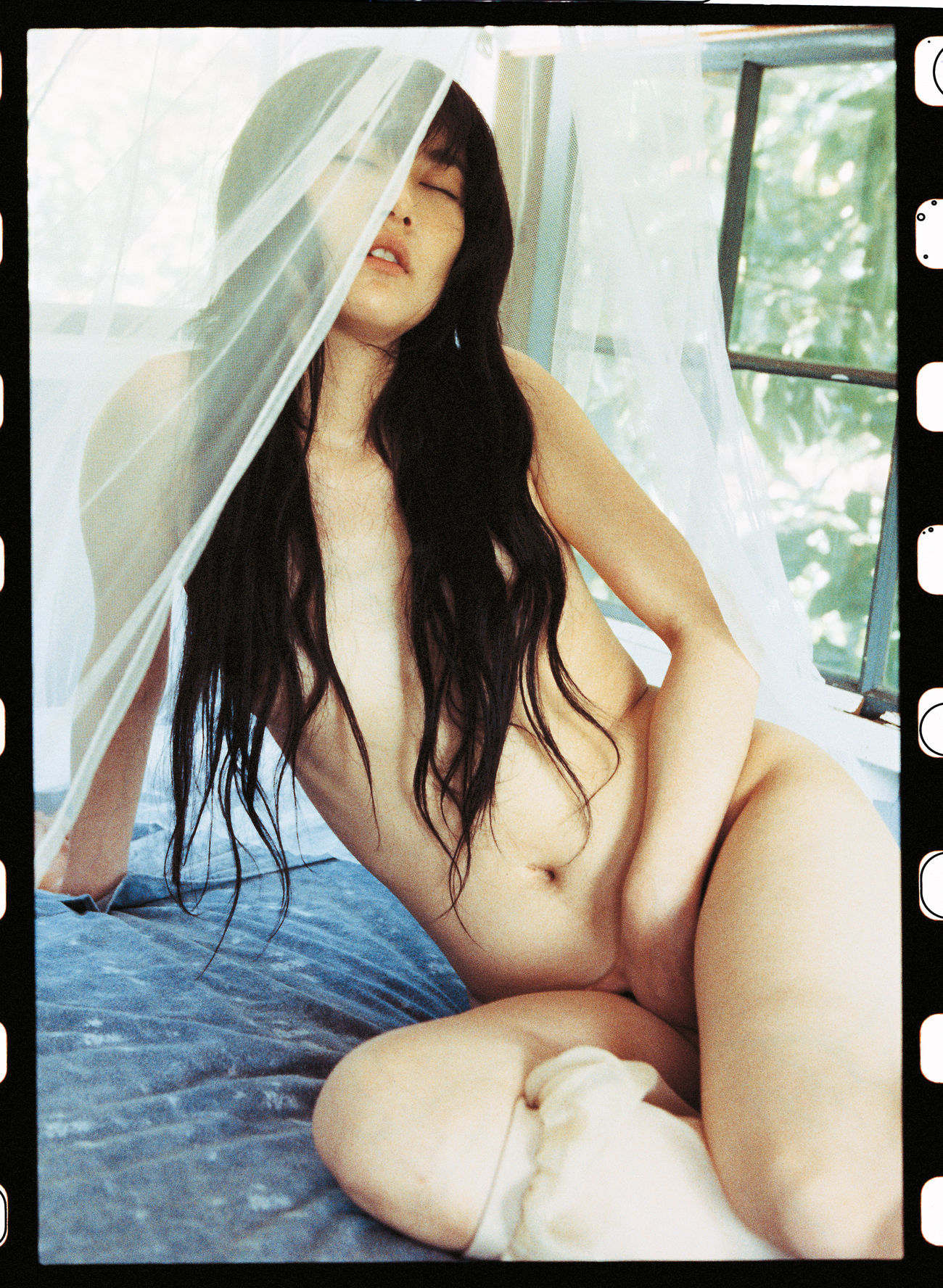 EKO SATO — Araki is of the same generation as you, and the two of you are automatically compared. What is your relationship? Is there a rivalry between you? What do you think about his approach to photography?
KISHIN SHINOYAMA — We are from the same generation, but because our photographic tone is totally different I don’t consider him a rival — although he seems to consider me one. It’s been almost ten years since we’ve seen each other. He has his own approach and it’s not my role to criticize it.

EKO SATO — Why do you often choose to photograph naked women in traditional Japanese homes.
KISHIN SHINOYAMA — The traditional Japanese home has the characteristic of capturing light with great softness. It’s an environment made out of paper, bamboo, and wood. Light enters through a sliding door, and so is very particular. The relationship between light and dark is extremely erotic. In European buildings, when light enters through a window the entire space of the room swallows it. In traditional Japanese homes, light seeps in through cracks and creates soft reflections. This fragility, this captivating softness, this infinite resonance, envelops a woman (not a contemporary woman like Rinko, but a more typical woman) and gives rise to an exceptional eroticism. I’m still very attracted to it all.

EKO SATO — Contemplating the photographs you took in traditional Japanese homes, Derrida spoke about the truth of dark and light. I feel this truth personally. At the same time your photographs automatically evoke the feeling of a little death.
KISHIN SHINOYAMA — That thrills me. Photography seizes time and divides it moment by moment. This suggests the death of time. The more one becomes deeply involved in one’s era and reality, the more strongly one feels this death. If you see sensuality and Eros in my photographs it is indeed because of this “little death.”