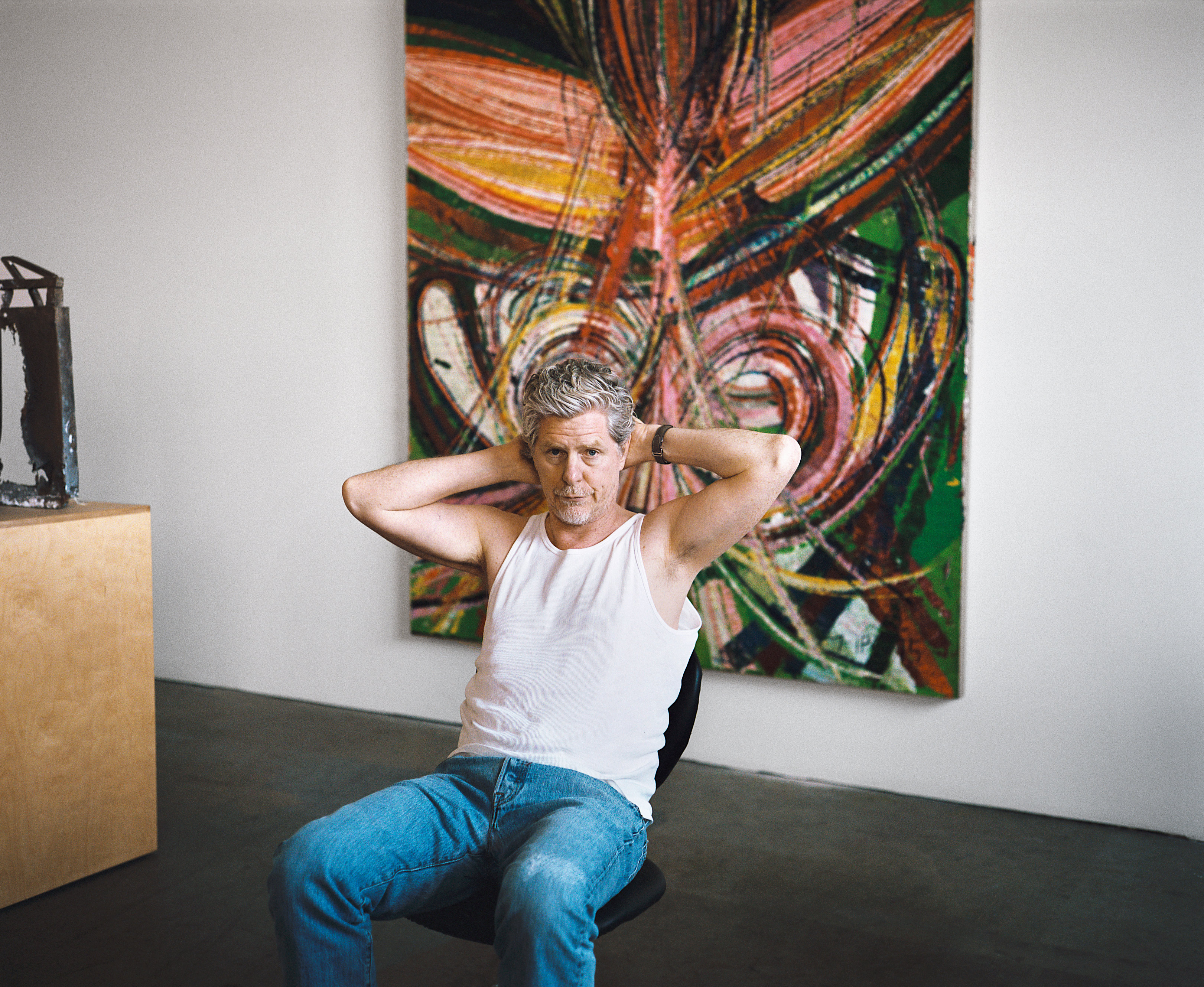 BILL POWERS — Hemingway used to stop writing once he had a good idea. He always wanted to begin the next day with something on deck. Can you relate to that?

MARK GROTJAHN — If I went to work and didn’t know what I was going to do, I would spiral to the point where it might take me a whole day to recover. So I always have the next thing planned out. Someone from my studio will e-mail me a photo of the painting in progress. That way, I can draw over it at home, so when I go back to the studio I start with my notes.

BILL POWERS — John Currin will use transparencies he tapes up over a painting in progress so he can test different elements.

MARK GROTJAHN — I used to paint wings or eyes — these jazzy Matisse shapes — which I’d cut out and pin to the wall to help me block out the painting.

BILL POWERS — Jonas Wood’s Spiritual Warrior (2016) depicts you painting shirtless in your studio. Is that your everyday look?

MARK GR OTJAHN — I always want to take my shirt off — if for nothing else, just to embarrass myself — but I rarely paint with my shirt off, no.

BILL POWERS — Is it true that you forced Shane Campbell to buy himself a Porsche?

BILL POWERS — Okay, you created a set of conditions by which he felt compelled to buy himself a sports car.

MARK GROTJAHN — He’d been talking about getting a Porsche forever. And I liked the idea of my dealer in Chicago driving around in a Porsche. So I told him, “Tell me how much you need to buy the car you want.”

I think it was a used Porsche from the 2000s. So he came back with a number, and I made him a drawing that would sell for twice that price. This way he could pay half in taxes, and still have enough to get the car. But I would only give him the drawing if he bought the Porsche.

BILL POWERS — Do you ever wish someone would push you in that way?

MARK GROTJAHN — You know, I was poor for a long time, living in a storefront apartment making $13,000, maybe $18,000 a year. When I first met my wife, I had finally got to the point where I could go out to dinner and order a beverage with my entrée.

BILL POWERS — And you were already in your 30s?

MARK GROTJAHN — Yeah, and she was making more money than me. Jen Guidi was working as a faux finisher: painting beds and cabinetry. I think she might have painted roses onto Ozzy Osbourne’s bed. She was making like $18 an hour.

BILL POWERS — Do you romanticize those early days?

MARK GROTJAHN — I remember being sick with a fever in my filthy shower and promising myself that I would never romanticize that situation. And, of course, six months after Jen and I moved in together, I totally romanticized it. Even now, I’m super-attached to that struggle. I want everybody to know.

BILL POWERS — Because you’re afraid of being seen as a rich asshole now?

MARK GROTJAHN — I want to convince people that I paid my dues, but I’m not sure these stories do much to change anyone’s mind. No one gives a fuck. 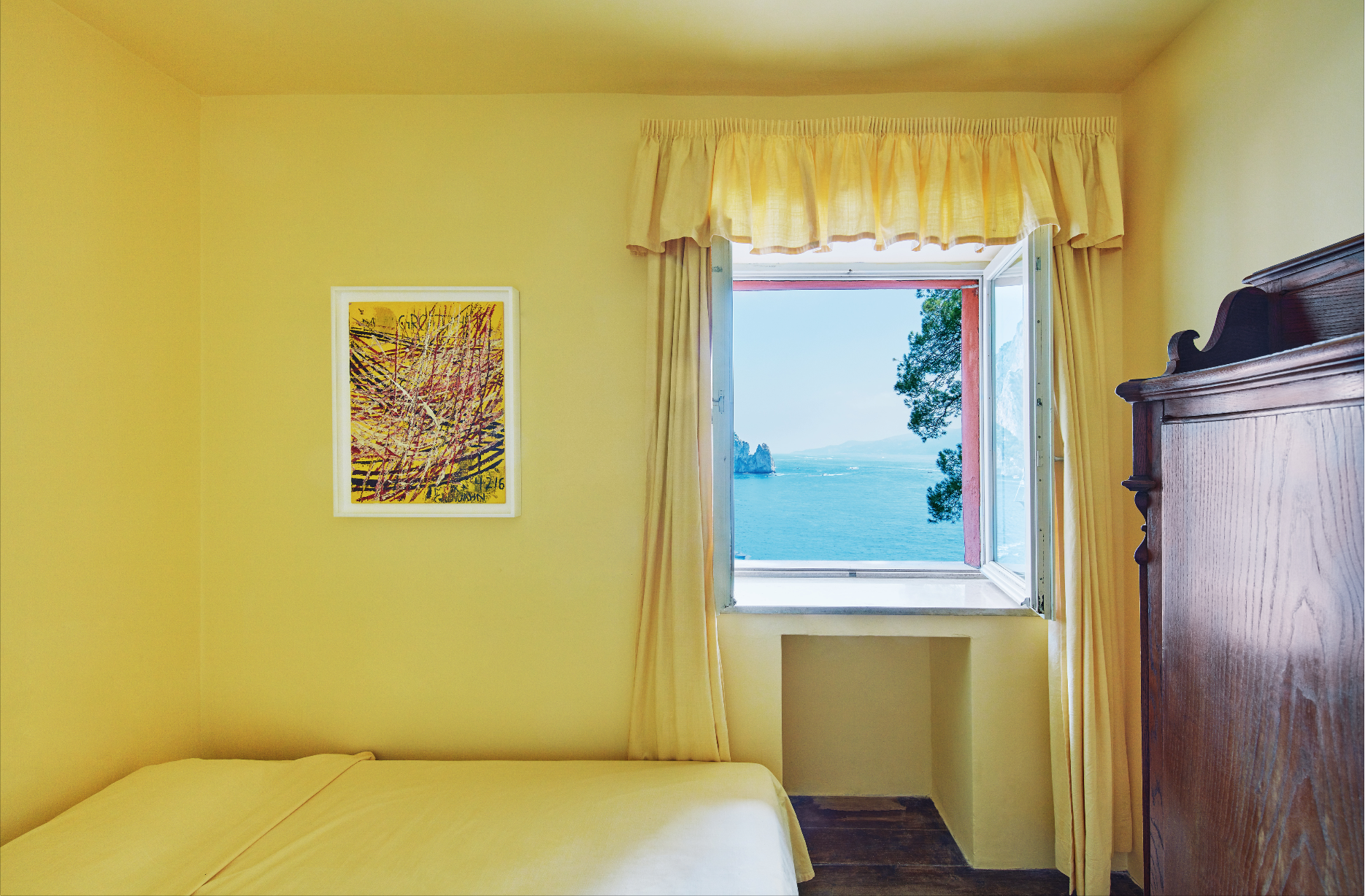 BILL POWERS — Is it true that you drive around LA in a Rolls-Royce?

MARK GROTJAHN — Yeah, once a week I have a driver, and he takes me to my appointments on the Westside. I have shrinkage on Tuesdays, double session.

BILL POWERS — Why a double session?

MARK GROTJAHN — I’ve got a lot of problems.

BILL POWERS — Was it hard growing up with your dad as a shrink?

MARK GROTJAHN — There was never any psychoanalysis around the dinner table. We shared a similar worldview: that people are inherently good and trying the best they can. If anything, he didn’t instill in us any awareness that some people are fucked-up and selfish in ways that go beyond the norm. And those people should be avoided. So that’s what I’m gonna do for my kids.

BILL POWERS — When your dad was a shrink, did he have famous clients?

MARK GROTJAHN — Janis Joplin was my dad’s only famous client. My grandfather started the Psychiatric Institute of Southern California. He was like the shrink to the other shrinks. And then all the stars began going to him. I would have been the sixth generation of doctors in my family. In college, I imagined that at some point I would switch over to pre-med, but I never did. 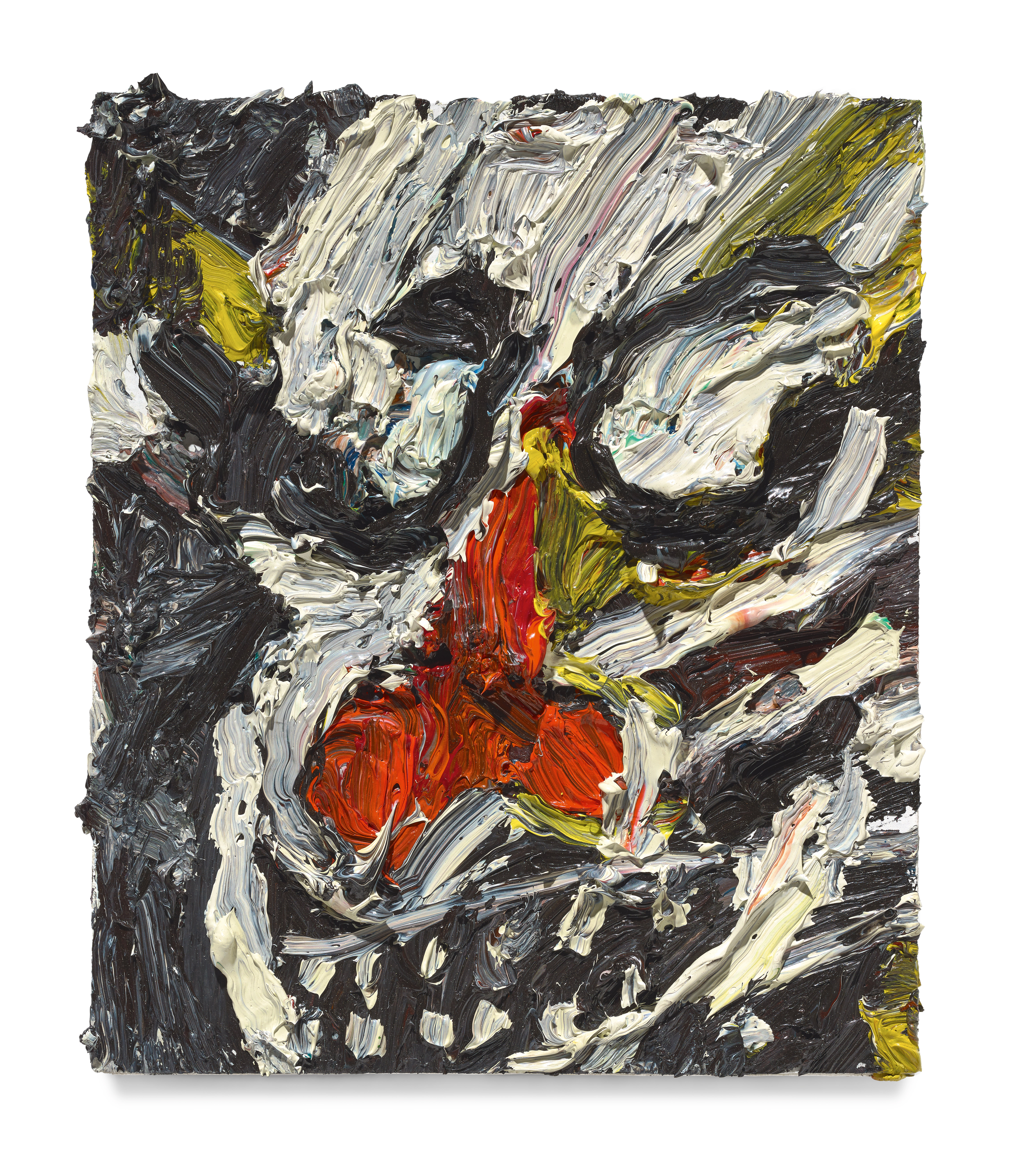 BILL POWERS — Where have you crossed over into pop culture? Didn’t I see that you recently did iPhone cases?

MARK GROTJAHN — I posted some pictures of them on Instagram because I thought fans had made them to personalize their iPhones. It turns out they’re just knock-offs from China.

MARK GROTJAHN — A skull is such an obvious touchstone. I remember talking to my shrink about it because I’m not very good at painting skulls. I do sometimes post them on Instagram in real time just to get a buzz. Making the skulls puts me in touch with my own inadequacies.

MARK GROTJAHN — I really enjoy painting when everything is firing. I’m sure it happens with athletes, too, but that is not a sustainable feeling. I get more long-term enjoyment from making works I feel good about than the pleasure I get from making them in the moment. I’m now moving toward a new body of work where I remove the face completely. It’s really nonobjective work.

BILL POWERS — What’s the difference between abstract and nonobjective art?

BILL POWERS — What’s your interest in the nonobjective?

MARK GROTJAHN — I just love that kind of work. I’m tired of relying on the face to make my paintings. I want to focus on movement, color, and line. And texture. And application.

BILL POWERS — I guess “nonobjective” to me suggests something clinical or cold, separate from humanity.

MARK GROTJAHN — Pollock is what I want from nonobjective painting, and it’s very expressive. I think that’s what Christopher Wool wants. And I think that’s what Brice Marden wants. They want this all-over thing that feels natural. I want to say that we all want the Jackson Pollock freedom, or at least I do. 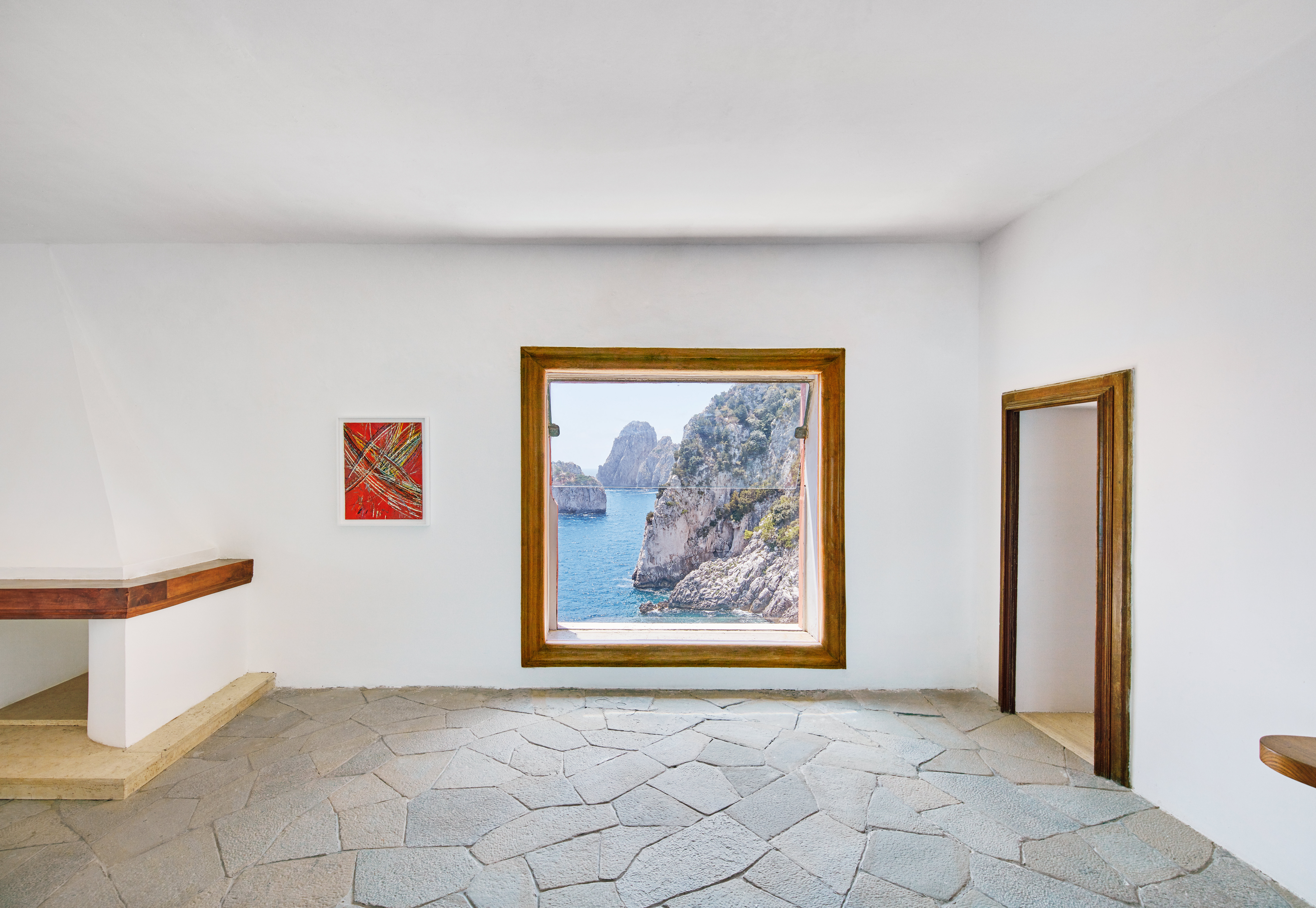 BILL POWERS — Are you trying to make art beyond judgment or consequence?

MARK GROTJAHN — No, because one of the exciting things about showing the work, especially in New York, is that there are such huge consequences. I like feeling naked or exposed in that way. It’s a thrill. But, on the flip side, I thought that success would give me personal impunity, which was not the case.

BILL POWERS — Is that part of why you stopped drinking?

MARK GROTJAHN — We’re talking about consequences, right? I didn’t want to feel bad about myself. When I drank, I finally got to shut off that critic in me, the one that’s constantly following me around. I believed that if I achieved enough in my art, I could shut that motherfucker up forever, which turned out not to be true.

BILL POWERS — At your last opening in LA, one of your dealers talked in his toast about this game you play on Instagram: kicking an inflatable ball into a lamppost basket. It seems very obsessive-compulsive.

MARK GROTJAHN — And I do that with my art, make the same thing over and over again. Physically it was just super-fun: 100% pleasure.

BILL POWERS — When you have pictures of farm animals and fresh-baked pies on your Instagram, is that at your ranch somewhere?

MARK GROTJAHN — I follow these farmers. I take their pictures and republish them as my own.

MARK GROTJAHN — In a way, I really want to have that life. I just bought land in Colorado, so hopefully I’m moving back toward nature and snow.

BILL POWERS — Didn’t you once have a painting hanging in the White House?

MARK GROTJAHN — Yeah, in high school, during the Reagan era. It was some competition where they took an artwork from each state. And I won for California. I think the story you want to hear is how I did that painting on acid by our pool with my eyes closed.

BILL POWERS — And your parents never took you to see it?

MARK GROTJAHN — Never. And then last year I had another work hanging in the White House. There’s a picture online of Obama with Kanye West and Kim Kardashian with a butterfly drawing on the wall behind them. I don’t know how they got it. They didn’t get it from me. 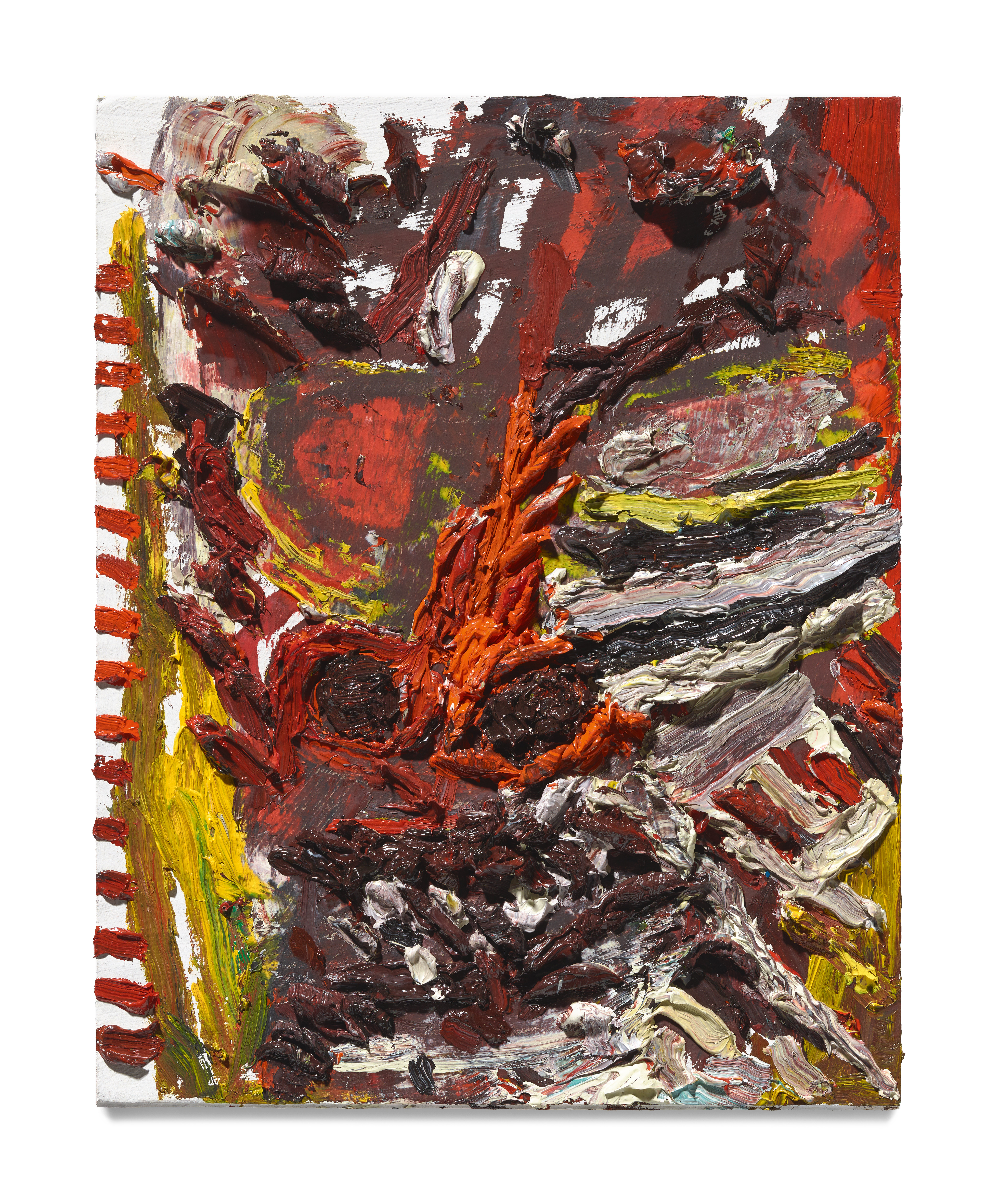 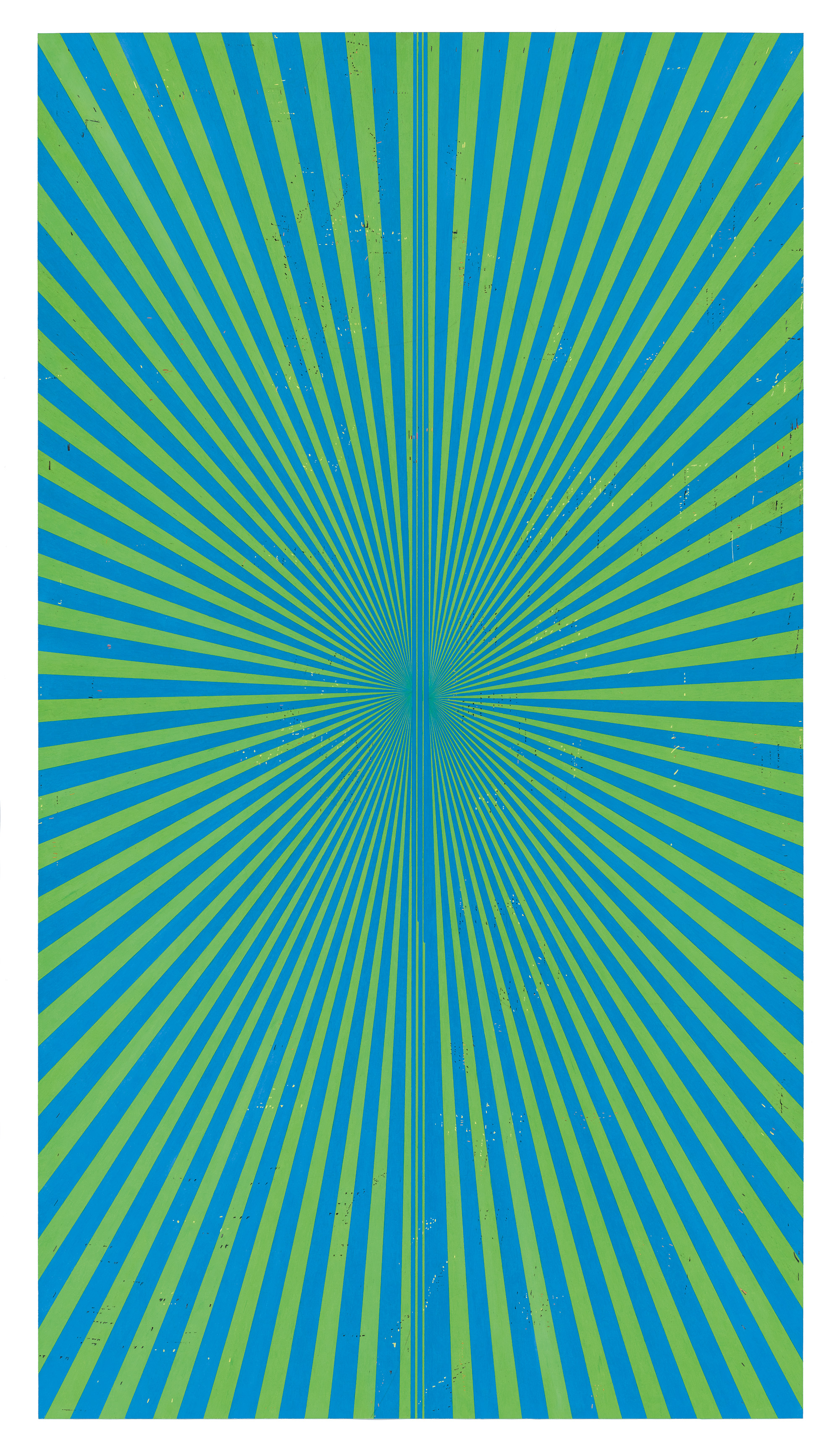 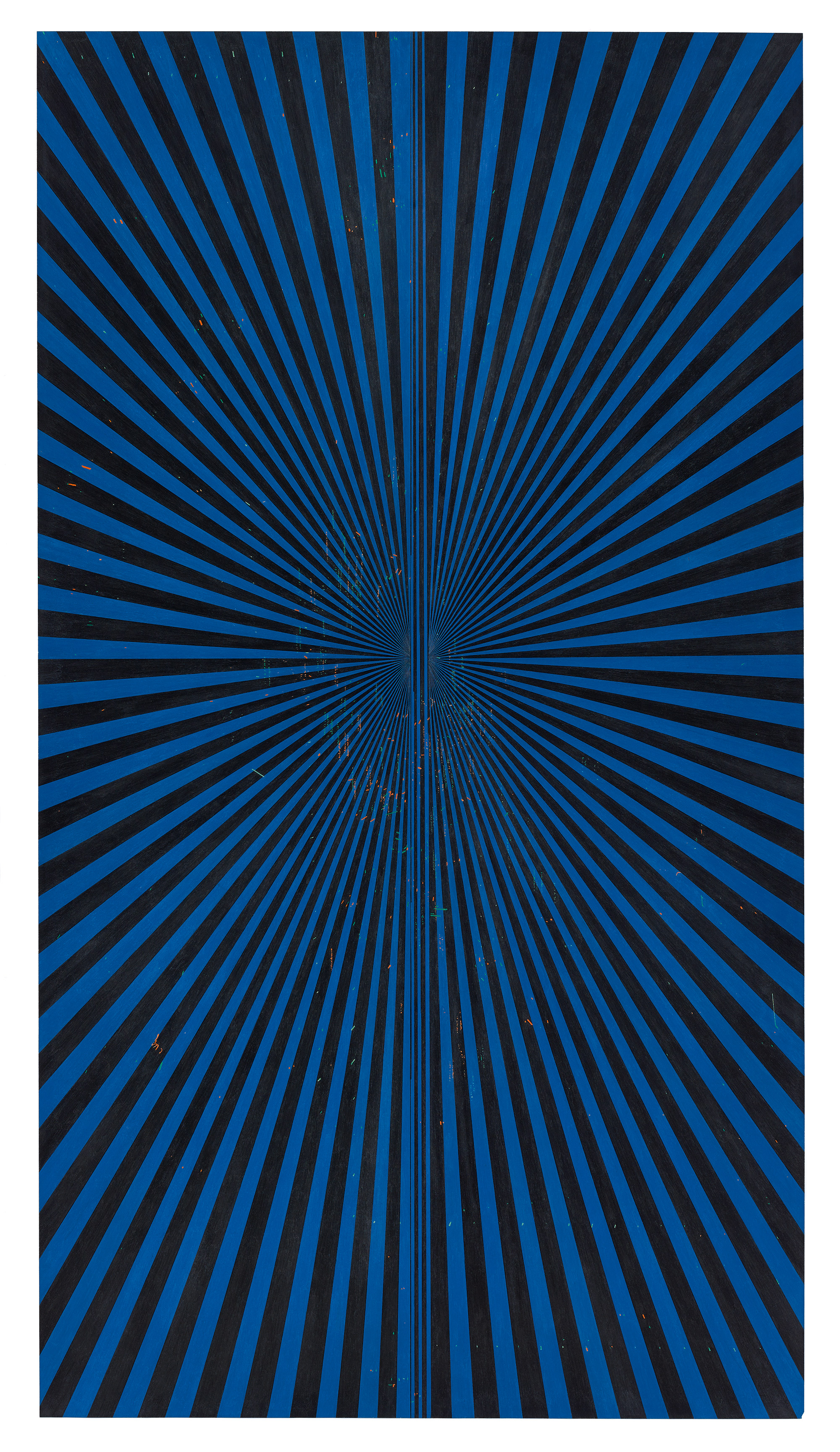