EMILY WELLS — You call yourself a “sexual anthropologist” — how specific to you and your experiences are the items in the box?

BETONY VERNON — Everything that I do is informed by my fascination with human sexual behaviour throughout history. My quest for pleasure is what led me onto the path that I have been paving for the past 25 years. It also led me to design objects as a response to the marketplace, which was not providing for my needs, aesthetically or functionally. It was through my early erotic works in silver and gold that I understood that I was moving into an arena that was still riddled with taboos. It became my mission to dismantle the taboo of all taboos: that of pleasure, not sex in itself. My sexual philosophy is hinged on full-body stimulation, when we engage the entire body as a sexual organ, and doors to another sexual dimension fling wide open. Fast consumer sex is simply not where it’s at!

EMILY WELLS — The box was put away, meant to be photographed by Helmut Newton, until his untimely death. After his death, you kept it secret. Why and how did you reveal it?

BETONY VERNON — The risk of being stigmatized was, and still is, something I try to swerve around. Why did I reveal it now? After 25 years of trailblazing, I feel like I must fan off the smoke veils and stand in the light. There is no better time than now, and I feel fearless. 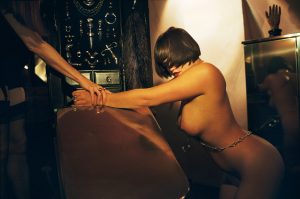 EMILY WELLS — Did you design all the items in it yourself? How do they differ from normal sex toys?

BETONY VERNON — Yes, I design and prototype all of my work. Many of the objects are a response to the sex market, which in the ’90s, and still today, has not taken some very important issues into consideration, such as noble and body-safe materials, durability, and a timeless aesthetic that appeals to adults who seek the finer things in life — including in their sex lives. While I am a firm believer that everyone should prioritize sexual play, I was never drawn toward the childlike aesthetic of the vibrator boom at the end of the ’90s. The idea of putting plastic toys inside my body was out of the question. I don’t
consider my objects toys, and it is for this reason that I coined the term jewel-tools.

EMILY WELLS — When did you create it? You seem to have given a very particular aesthetic to something that is usually predominantly about sexual function.

BETONY VERNON — I started to design the Boudoir Box in 1998, after having a full-blown vision in Paris, and by 2000, the first working prototype was completed and ready for its first journey. The time that I dedicated to its development was invaluable because there simply were no viable retailers. Essentially, the Boudoir Box made me a traveling saleslady, and crossing international borders and customs became part of the art. My aesthetics are commanded by the fact that I consider sex sacred, and sometimes I call the Boudoir Box my tabernacle.

EMILY WELLS — The Boudoir Box seems to be designed as a suitcase. Is it made to leave the boudoir?

BETONY VERNON — I do have a fetish for trunks in general, particularly cutlery trunks from the 17th and 18th centuries. Other inspirations are cocktail boxes or portable bars, vanity cases, and sophisticated picnic baskets. I love the idea of being able to move a ritual from one place to another, like a ritual on the move.

EMILY WELLS — When you open the box, is there a ritual that goes with it? Do you choose what you will use with someone, or is it the other way around? Or is it different each time?

BETONY VERNON — Opening the Boudoir Box is always a ritual. The order in which the objects are used is determined by the needs and desires of the lovers in question; our sexual needs change with our moods, with our physical state of being, etc. You know, it’s not every day you want to be flagellated; sometimes you might not be in the mood to use tools at all. At the same time, no matter how you play, the Boudoir Box always sets the stage for the art of loving.

EMILY WELLS — Is the box for all genders?

BETONY VERNON — This Boudoir Box in particular is made for heterosexual lovers, and there are jewel-tools in it for both men and women. Many of my jewel-tools are unisex, and I also make custom boxes to satisfy the needs and desires of any gender and every sexual orientation.

EMILY WELLS — What is your favorite piece in the box?

BETONY VERNON — The Petting Ring could be one of my favorite pieces because it best represents my overall sexual philosophy. It forces the wearer to make the chin mudra, which is the gesture used during meditation to maintain a focused mind. It also provides new and different sensations that are obviously dedicated to the gentlemen and those who love to please them. The silver form creates a mirrored frame around an erection; flesh on flesh is what we are all accustomed to, but you can imagine how beautiful it is when you stroke your man’s family jewel while he is wearing this precious prosthetic. It provides sensations that cannot be achieved by the hands alone. One of the things I strive to do is to bring a new aesthetic to the sexual ritual. I believe that it is naive to separate the pleasures of sex and spirit.

EMILY WELLS — Is the box, or the experience of using the box, for sale?

BETONY VERNON — This Boudoir Box is an edition of 10 and is available to order — the production time is one year. I also create customized, one-of-a-kind Boudoir Boxes. As for the experience of using it, an initiation is included with the sale. I have recently made it possible on my website for people to make a bespoke appointment to view the Boudoir Box. During this experience, I introduce collectors to the Boudoir Box and other objects I design that are not available anywhere other than Eden, my by-appointment-only salon in Paris.