The architectural movement known as Brutalism originated in Europe after World War II, when the reconstruction of demolished cities necessitated fast, cheap housing development on one of the largest scales in the history of architecture.

The expression was first coined for a small brick residence built in Sweden in 1949, but the movement didn’t solidify until 1966, when the famed British architecture critic Reyner Banham published The New Brutalism: Ethic or Aesthetic? The term “brutalism” is a reference to the use of raw concrete (béton brut in French) and is applied mostly to large-scale institutional buildings. Perhaps the most iconic edifice of this movement is the Cité Radieuse (Unité d’Habitation) in Marseille,  built in 1952 by Le Corbusier — an architect previously known for his small-scale residential work. The Cité Radieuse is a large public housing development elevated from the ground, with an art center (formerly a sports facility) on the roof. Massive in terms of both size and material heft, it went on to become a major influence for architects around the world.

Some of the architects associated with Brutalism — Marcel Breuer in the US, Claude Parent in France, and Oscar Niemeyer in Brazil, for example — also designed smaller residential structures for architecturally adventurous clients. These buildings are less well known than their institutional counterparts, but are nonetheless interesting as a radical antagonism to social and aesthetic norms. They reveal their architects’ talents on an intimate scale, turning raw concrete into a smooth, seductive foundation for new forms rarely seen in domestic settings. Whether through curves, rotundas, bunkers, or even spaceship-like shapes, these structures straddle the gap between the ancient origins of the discipline — when pyramids, temples, and fortresses were carved out of raw stone — and modernism’s visions of the future. 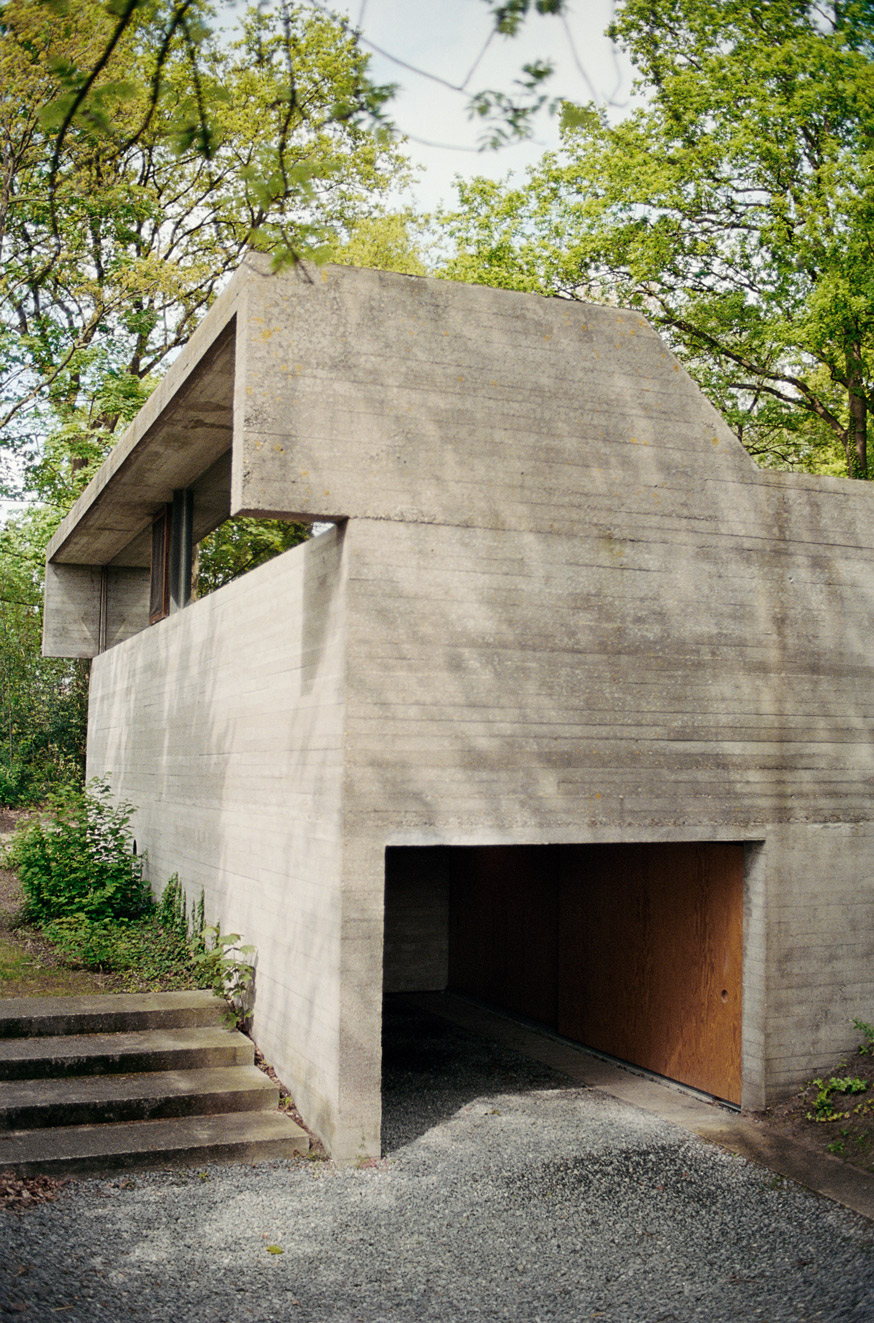 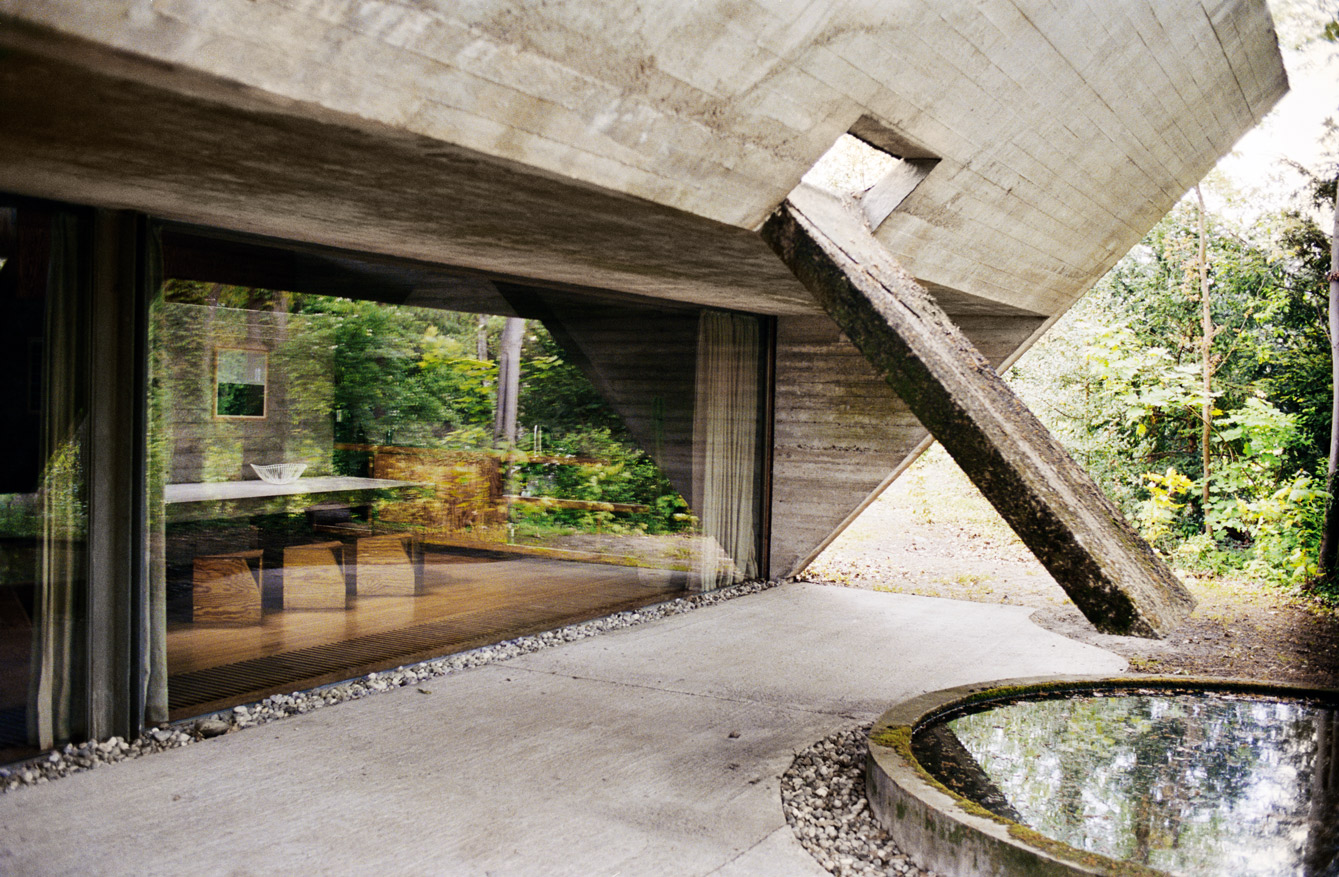 The epitome of functional living and Brutalist achievement might be the under-the-radar Van Wassenhove house in Belgium, designed in 1972 and completed in 1974 by Juliaan Lampens for a teacher named Albert Van Wassenhove. What could have been just a monastic garçonnière — a bachelor pad — became a world of its own under Lampens’s sharp and considerate stewardship.

The Belgian architect, who founded his practice in 1950, has long been associated with the deep architectural influence of the 1958 Brussels World’s Fair, where Le Corbusier and other masters also showed. Lampens’s style, however, is unique. His concept of domesticity — an open-floor-plan system that enhances personal enlightenment rather than privacy — was developed for his own house, near the former medieval and bourgeois city of Ghent, and carried over to his design for the Vandenhaute-Kiebooms family house (1967), a concrete cocoon where hanging panels and cylinders created intimate spaces instead of the confinement of traditional load-bearing walls.

This organic approach to living reached another level with the Van Wassenhove house, which is the complete opposite of the large cottage-style residences found throughout the area.

Inside, telescoping geometric shapes of concrete and wood seem to whisper their functions like an oath made between the foundations and the house’s dwellers (a triangle for the kitchen, a circle for the bedroom, etc.). All the furniture is custom-made. Views of the exterior world are kept to a minimum, as in a pilgrimage chapel that Lampens built in Kerselare, East Flanders, in 1966, which looks like a merger between a World War II bunker and a Zen temple.

Most of the exterior sides of the Van Wassenhove house are solid concrete. The use of glass solely on one side directs focus to the leafy garden and rainfall waters as they flow into a well (almost echoing the nearby Lys River, which inspired many 19th-century Flemish painters), while the rear structure on the glass side seems to open up like a vault, creating the feeling of a safe place inside. Today, the house is under the care of the Museum Dhondt-Dhaenens and functions as an artists’ residence. And, unlike many other Brutalist masterpieces of its time, it is accessible: on summer weekends, you can even rent it on Airbnb. 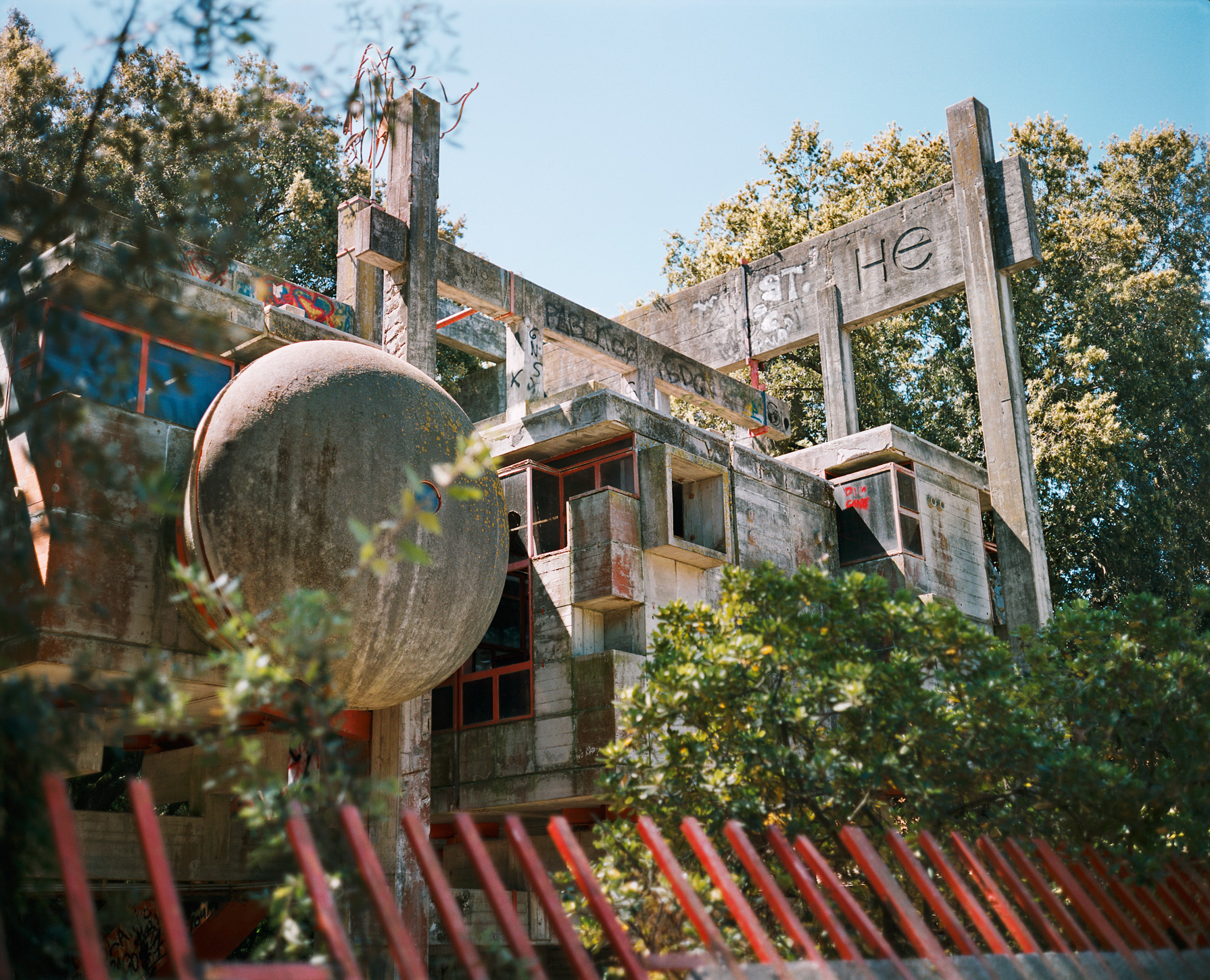 This house, built in the late ’60s in a small coastal town near Rome’s international airport, was a radical experiment in redefining what domestic architecture could be, exploring new spatial thinking and construction techniques. A threedimensional concrete grid contains the different volumes that define the house and its succession and intersections of cubic and spherical volumes, while acting as an exoskeleton structure. This outward visual expression of building technique was characteristic of the Brutalists. Along with their use of raw building materials (concrete, glass, steel), proponents of the movement transparently revealed structural solutions, which are hidden or invisible in most contemporary residential architecture.

Casa Sperimentale is unique in its appearance and organization, and remains to this day — despite being a ruin, now covered in graffiti and surrounded by vegetation — almost a UFO in the coastal landscape. The architect experimented freely with space and material, and the building looks as much like a giant public sculpture as it does a private residence. That feeling is reinforced when you look at the drawings of the house. The floor plan and façade could be interchanged, despite the complexities of the volumetric composition — a very rare occurrence in the history and practice of architecture. (The Farnsworth House by Ludwig Mies van der Rohe and the Case Study House 21 by Pierre Koenig have a similar quality, but they are both very minimal designs.)

While the house could be mistaken for a giant piece of art from the outside, the interiors, despite their unconventional volumes and connections, create a very intimate environment. Beautiful light streams in from the intricate windows, which are all framed in red steel, as are the beams and stairs; this effect softens the rawness of the concrete. The thoughtfulness and quality of these details — along with such very special features as the drawbridge-like red walkway that accentuates the house’s spaceship-like quality and out-of-time status — make it relevant today as a blueprint for the possibilities of residential architecture.