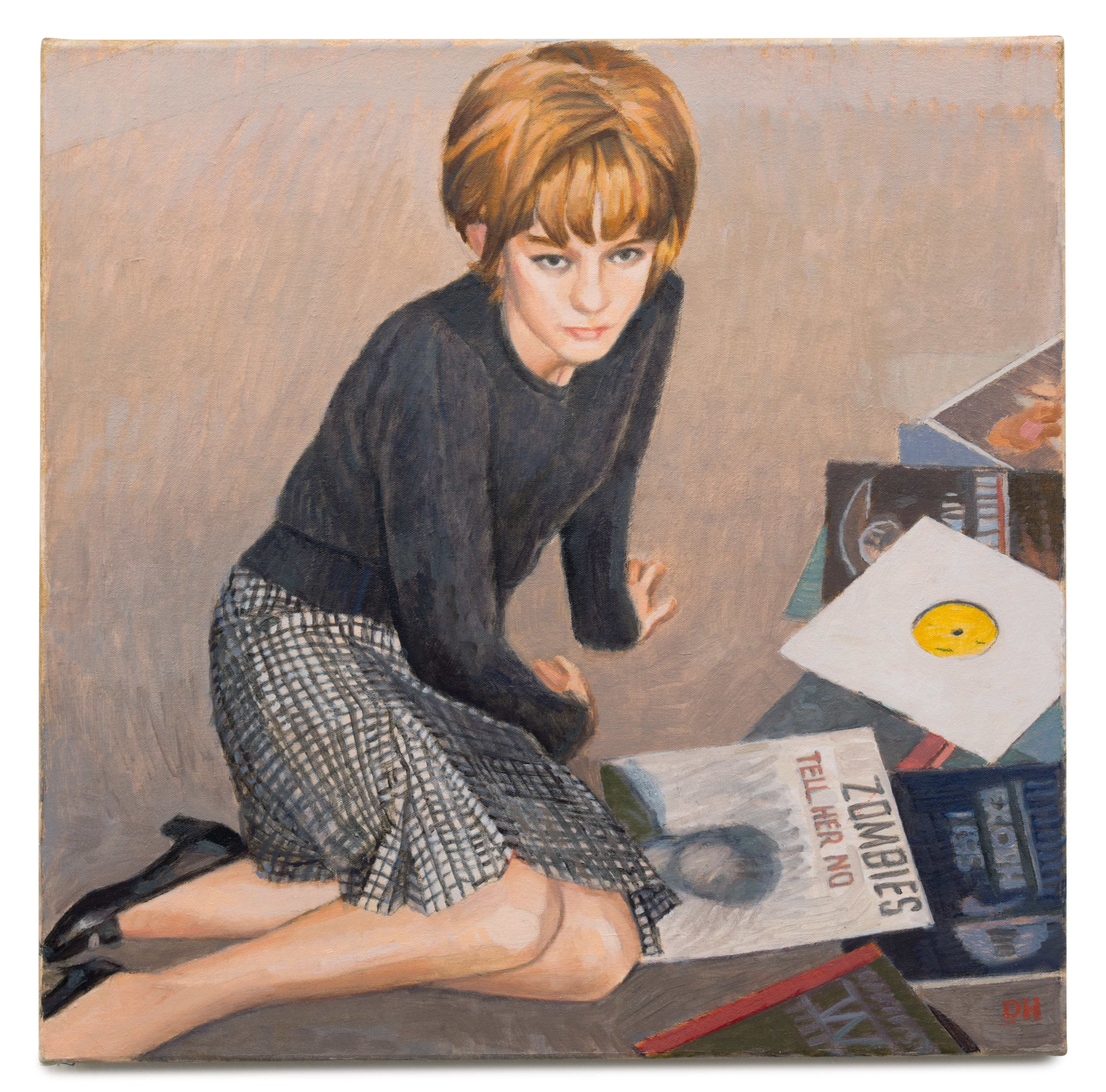 THE BRITISH INVASION, 2016, OIL ON CANVAS

The return of figurative picture-painting has created something like a physics problem — for everything beautiful, there is an equal and opposite ugliness.
Duncan Hannah finds himself in the very modern predicament of painting pictures that seem infuriatingly attractive. He has been called “the Barry Manilow of the New Wave” and the prophet of “the Age of Valium.” For some, the only calm is sedation, but this is not the case with Hannah. His natural serenity is strong enough to egg on a critics’ frenzy, which cries out for angst relief. No doubt there is a vocal and influential, if not large, group that needs loud, bent paintings to make reality seem safe by comparison. For them, beautiful paintings only make things worse. 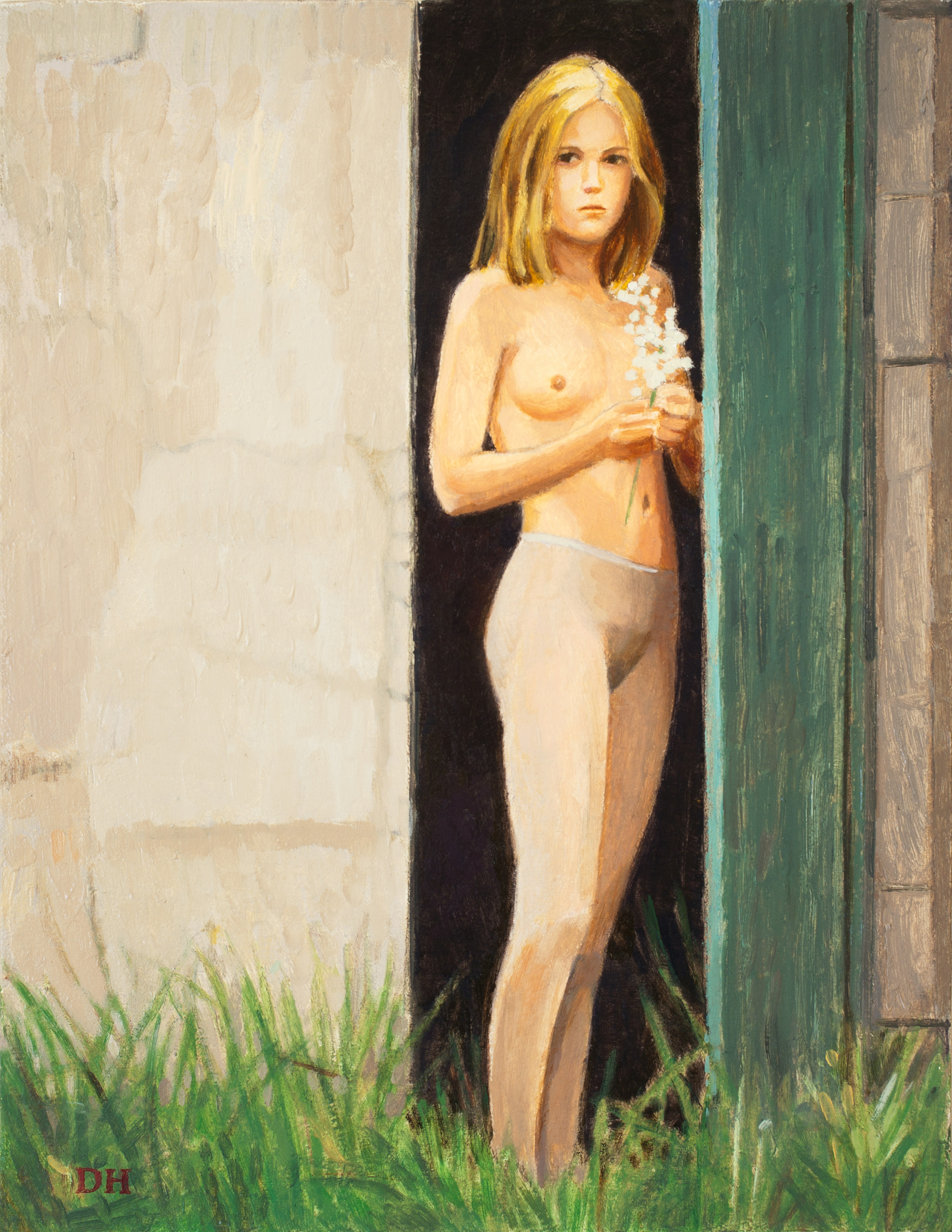 Hannah is more like the Henry Mancini of the New Wave, or the power-pop Balthus. He makes beautiful paintings that, like beautiful boys and girls, look like they should be popular. If he’s the prophet of anything, it’s that living and painting well is revenge enough.
Hannah causes problems for critics because they can’t figure out if he’s retro- or post-something. He seems to be attracted to the ’30s in the same way the Pre-Raphaelites were stuck on the early renaissance, in a the possibility of an unembarrassed beauty. The funny thing is that his teens, ’20s, and ’30s period pieces are a more beautiful vision of the period than the art of the time. We didn’t know what we had. Hannah has two basic styles. There is a cloisonné style in which fields of flat color, generally pastel oils, are applied with cosmetic thinness, leaving visible the texture of the canvas surface. Here there is Narcissa, 1983, a nude girl seated at a vanity table. Her figure and her posture are scientifically sexy: perfectly formed legs, ultimate foot posture, the archetype of making a ponytail, and the fixation of not-quite-visible eyes on their reflection. The most brilliant colors present are the make-up bottles. The spirit is very much that of Balthus — eroticism captured in a perfect angle. 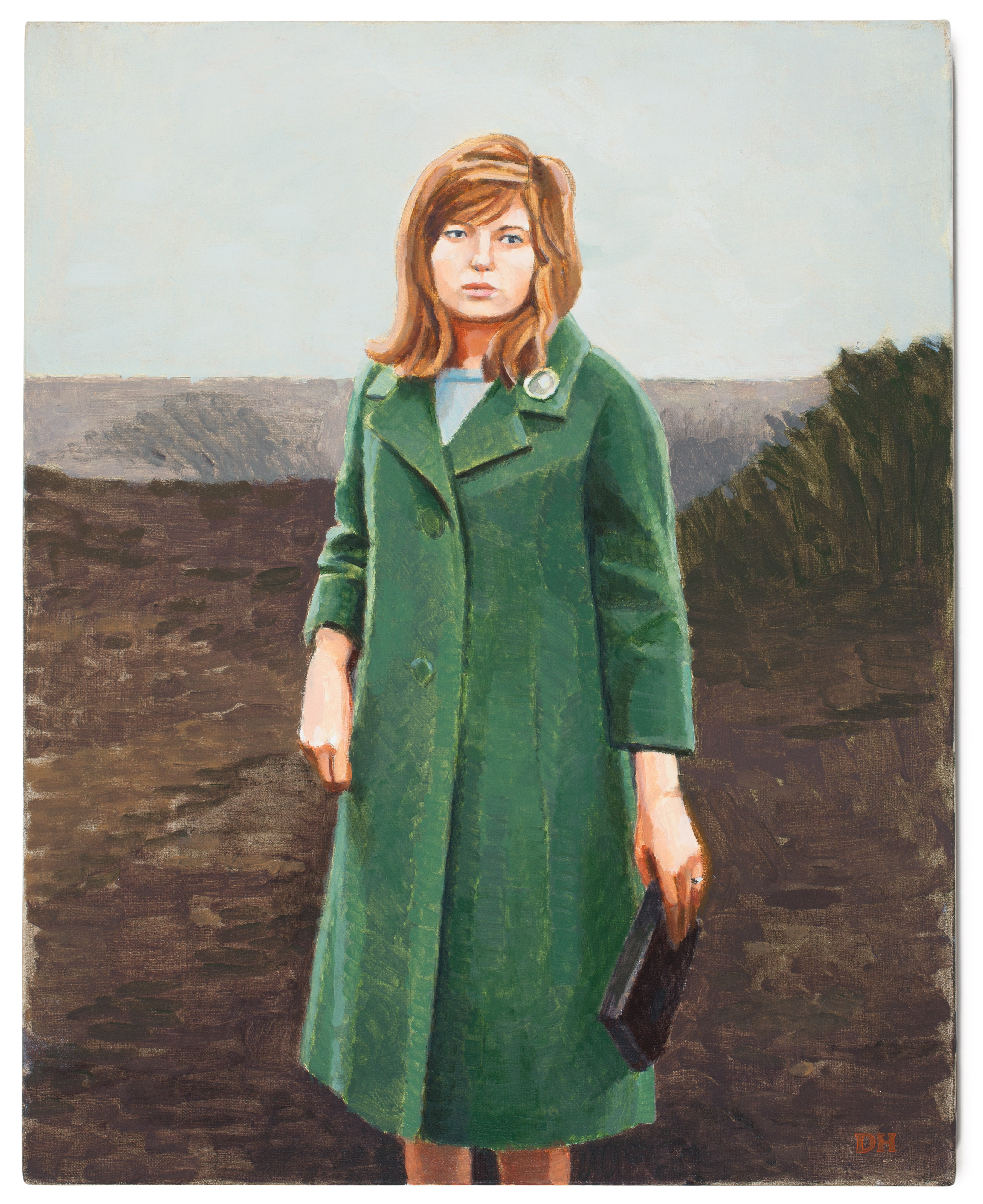 More and more, Hannah’s large fields of color are not flat but contain internal abstractions. I used to think of his work in this style as sort of James McNeill Whistler meets Graham Greene. He has that oriental sort of algebraic stroke, that sort of literate detective mysticism. Sometimes maybe it’s more Pierre Puvis de Chavannes meets James M. Cain. Christmas, 1983, is a gorgeous painting, finding a pleasurably hallucinogenic dazzle in an ordinary scene by rewriting its colors — the train trestle is pink, the sun pale pink, the pedestrians brilliant red and green, the ice on the tree branches pastel. There’s a joy in obvious effect, as in the wet-pavement squiggles and the gray and pink handmade sky.
In some of the paintings Hannah’s strokes are bigger and bolder than ever, possibly a concession — the only one — to the painting fashion his work preceded, inspired, and will endure beyond. Is it Neo- Post-Impressionism? Is it Ashcan-Flashdance? In City Lights, 1984, a semi-autobiographical canvas in which the artist seems to be portrayed by the very young John Carradine, Hannah out-does Edward and Hedda hopper at the same time. Purgatory never looked so much like San Francisco, and salvation never looked more like a pretty picture. 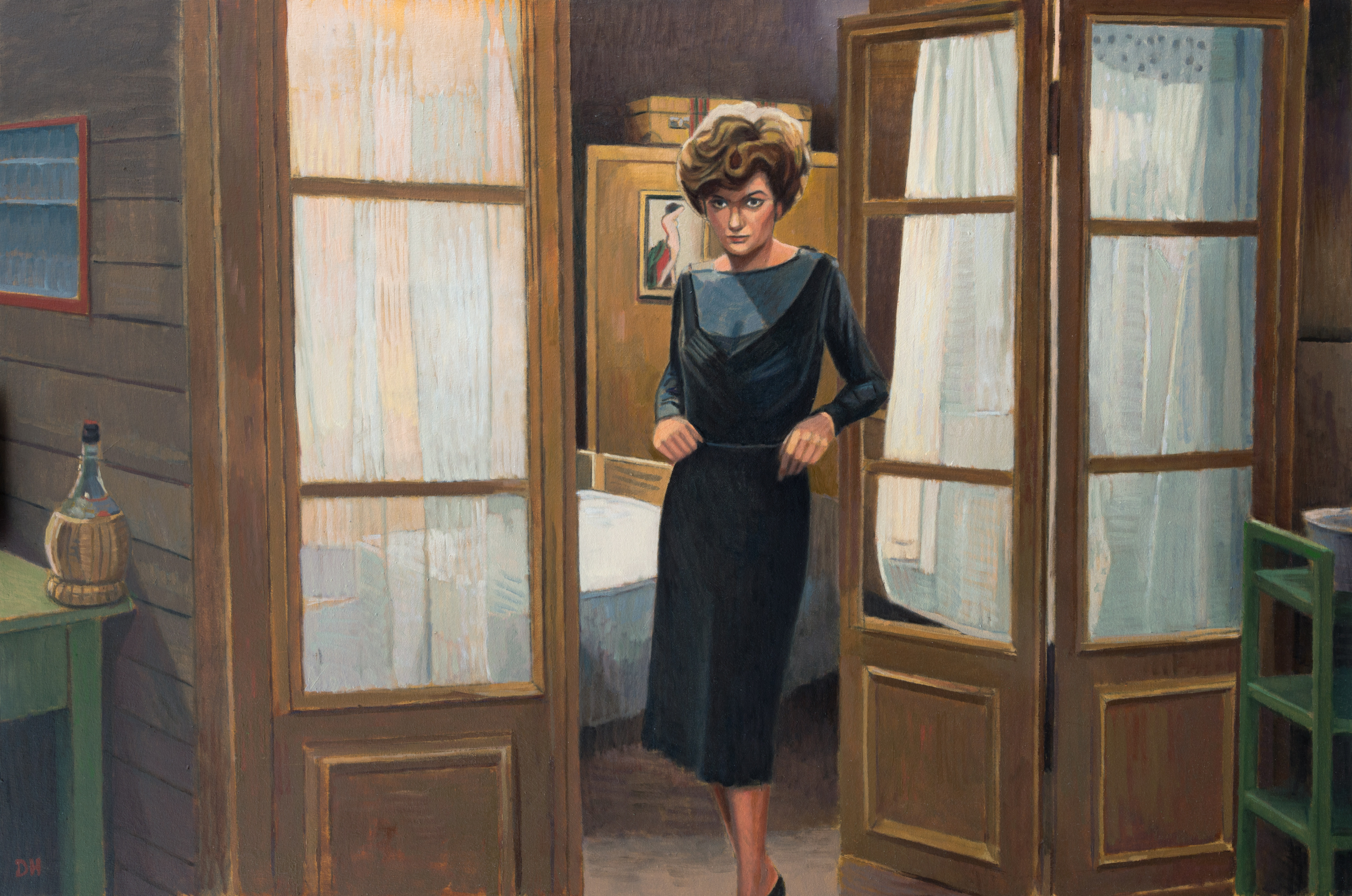 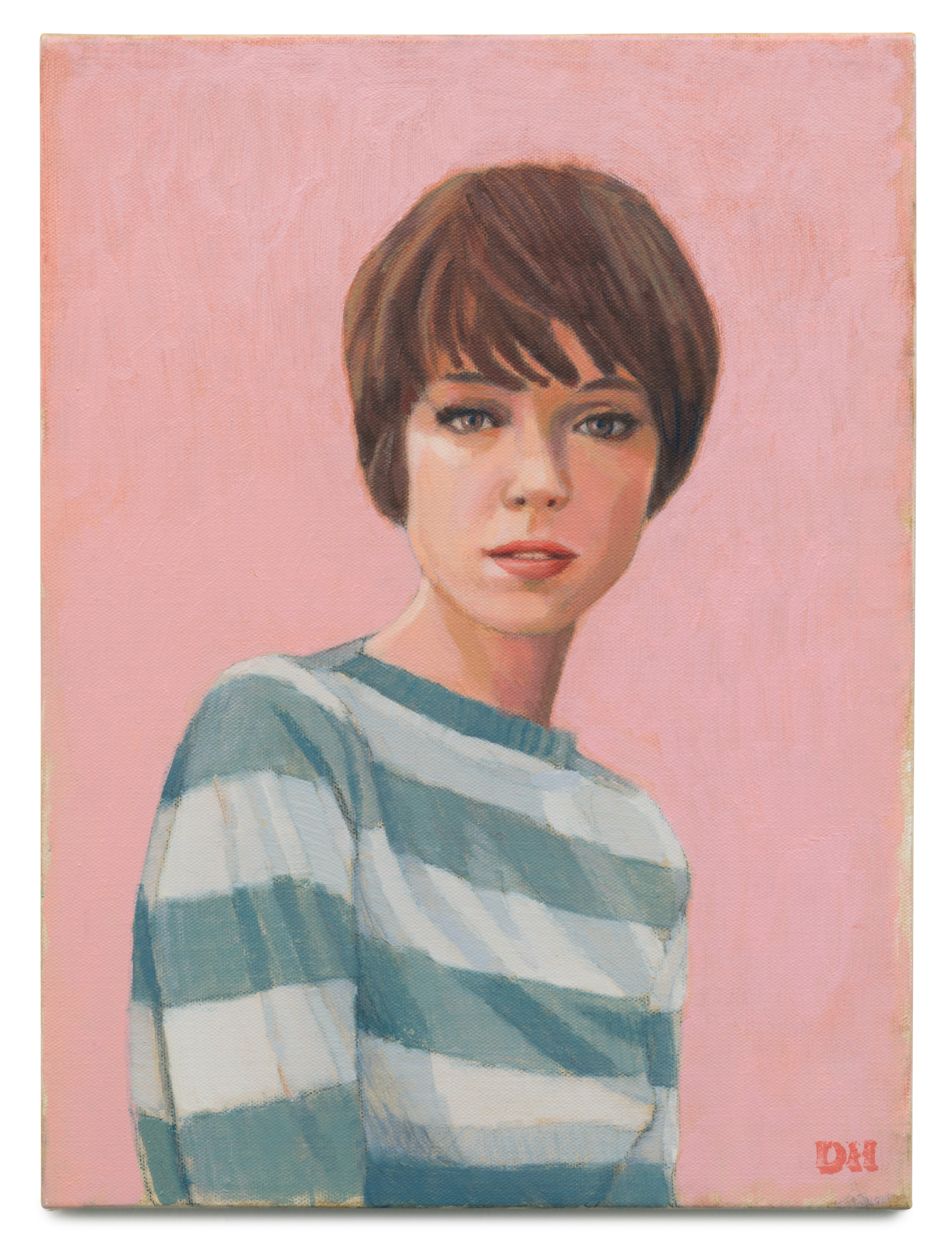 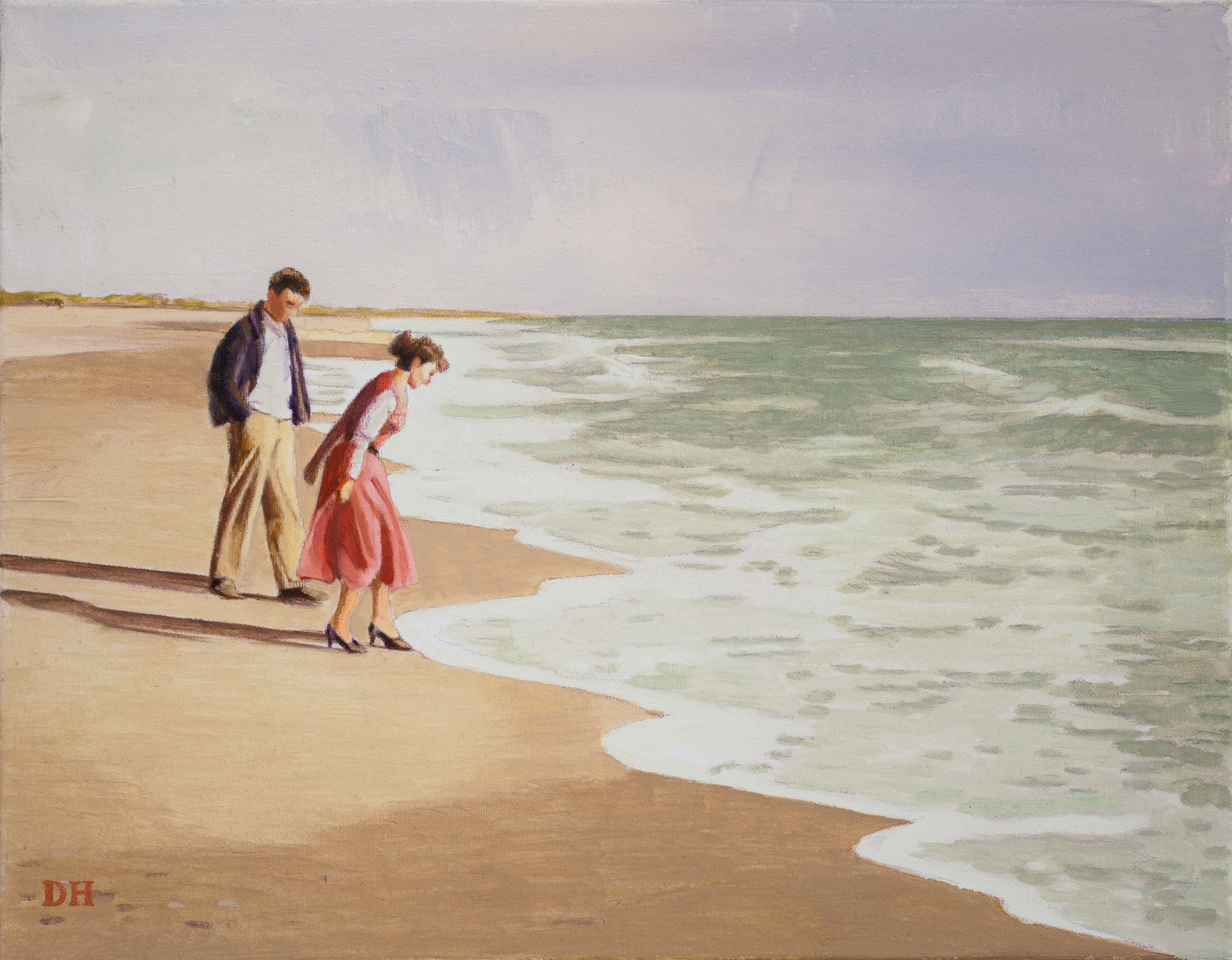