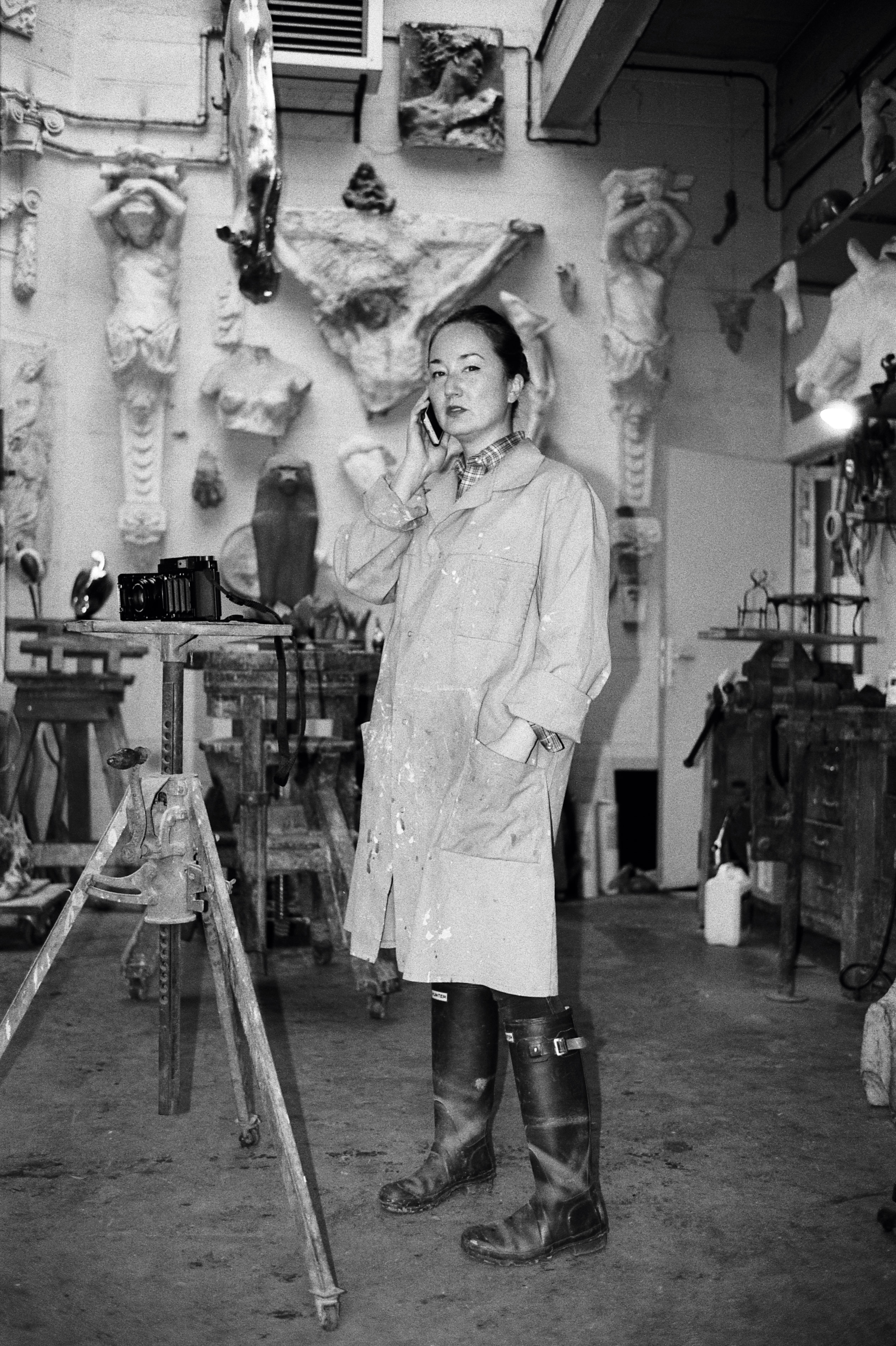 OLIVIER ZAHM — How did it all start?

HARUMI KLOSSOWSKA DE ROLA — The jewelry came before the decorative objects, which are a recent development. When I was a child, I liked to play with garden stones. I’d find them and keep them for their shape or color. I’d make little animals or characters, after my fashion. Only my father [the painter Balthus] would keep them safely put away. Then when I was about seven, my parents and I went to Paris and stayed with Claude Bernard, my father’s gallerist. He had an apartment filled with minerals and a whole room devoted to his collection of stones. At the time, my eyes were exactly level with the showcases. It was wondrous, one of my great memories. Every time I entered that room, I would spend hours using those magnificent stones to imagine landscapes and other worlds. That childlike feeling is what I’ve tried to recapture with my jewelry. At first I wasn’t necessarily working with precious stones. It wasn’t until Boucheron, in 2008, that I really started doing high-end jewelry.

HARUMI KLOSSOWSKA DE ROLA — It’s true. Nature is cruel, but we’ve utterly separated ourselves from the natural world, where we were surrounded by species more powerful than ours. It’s important for us today to get reacquainted with nature and with fear, to help make us aware that animals are just as important as we are. They’re part of our biological and mental system.

OLIVIER ZAHM — Animals invade our fears and our unconscious desires as well.

HARUMI KLOSSOWSKA DE ROLA — Yes, because we are all animals. 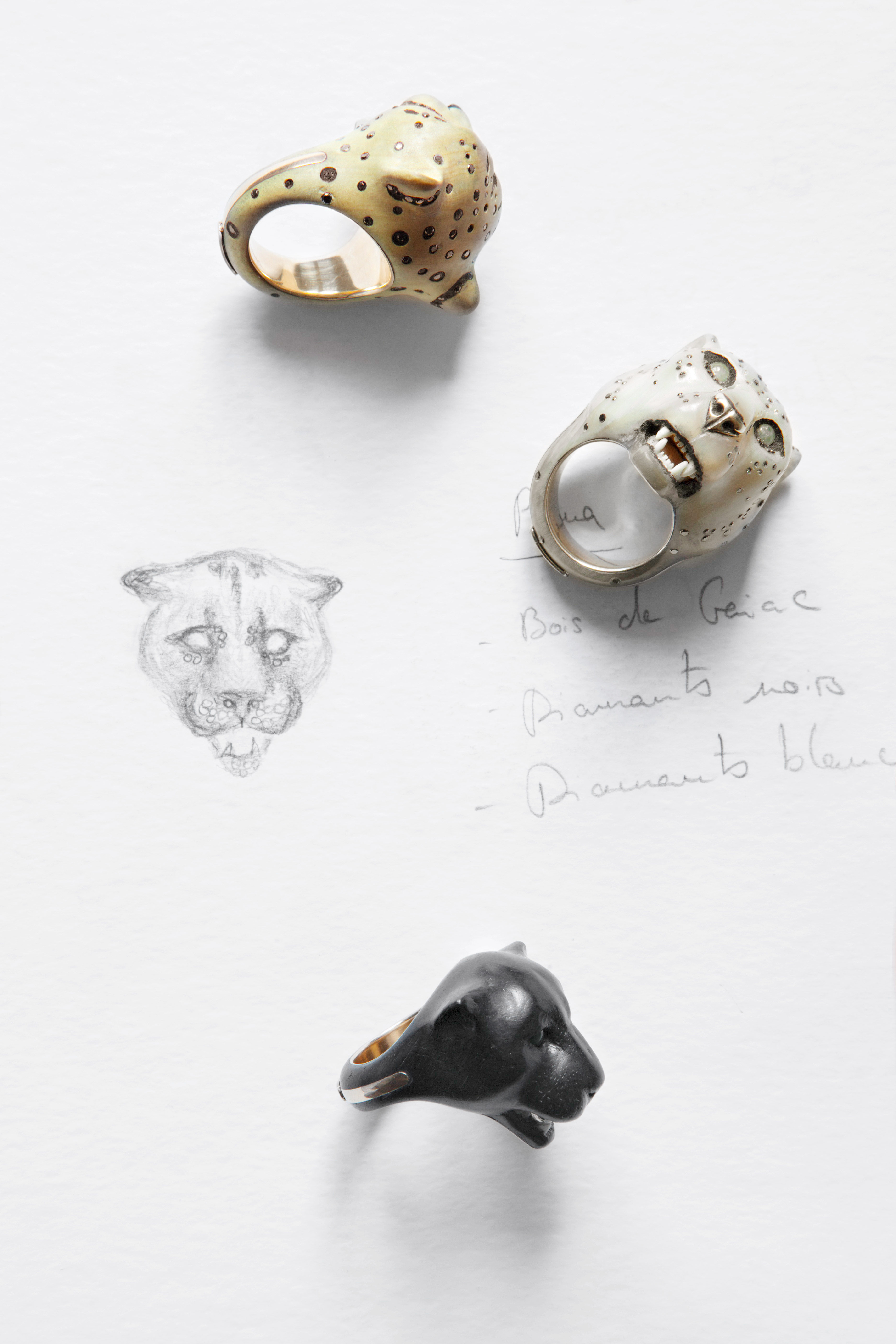 OLIVIER ZAHM — The jewelry you create is like art. The pieces seem timeless, like the kind of jewelry one might come across in an old collection. They’re a bit like found objects or objects from a forgotten world.

HARUMI KLOSSOWSKA DE ROLA — I’ve always been fascinated with Egypt and African art. And then there’s the influence of Japan, through my mother. I like it when time stops. It’s like the feeling I had two years ago when I was in Kyoto. It was the rainy season, and there was nobody in the temples. It was a magical moment. Everything was so silent, with all the temples empty. And I never forget, too, that jewelry isn’t always being worn. Sometimes it’s rarely worn. It’s interesting that jewelry can exist on its own, that it can be set on a table, that it lives a life of its own in the world of forms.

OLIVIER ZAHM — Like jewelry buried in a tomb.
HARUMI KLOSSOWSKA DE ROLA — Right. I like jewelry that can be just as easily set down somewhere as worn. And through jewelry, I’ve taken a tacit step toward the world of objects and the decorative world.

OLIVIER ZAHM — Creating objects like lamps, folding screens, benches, and tables puts you in a new and different position with respect to creation because the things you make have to be useful and functional as well. And yet even your objects are full of mystery. Where does your taste for the enigmatic come from?

HARUMI KLOSSOWSKA DE ROLA — No doubt from my Japanese origins. I’ve also always been fascinated with painters. Géricault, for example, and the way he’d depict animals like the horse. He managed to restore horses to the wild and not just present their elegance. He depicts horses the way they really are: full of life.

OLIVIER ZAHM — The wildness of animals can be troubling or repulsive at times, but it’s always rooted in pride. Your monkey, for instance, is no tranquil monkey. It’s not like, say, the animal art of the 1930s, which was very aestheticized, perhaps overly so.

HARUMI KLOSSOWSKA DE ROLA — A lot of people find wild animals somewhat troubling, but I don’t necessarily notice that. For my monkey, I took inspiration from Egypt, but also from Africa. I wanted it to be almost like a totem — noble, seated in a semi meditative pose. The monkey went through all kinds of stages. At several points, I lopped off its head because it looked too angry. And as it changed heads, it went from a cute little monkey to a baboon. 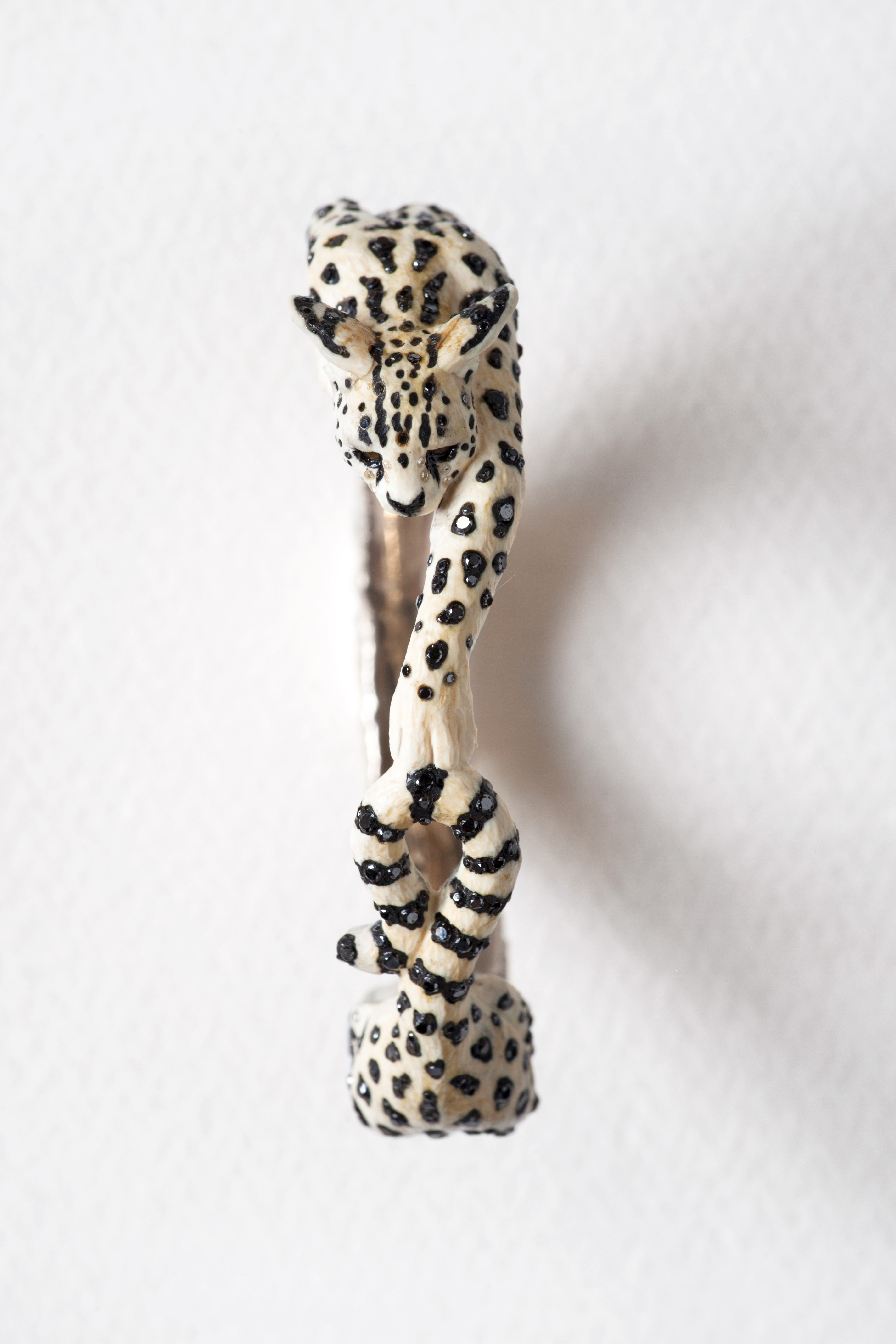 OLIVIER ZAHM — You build up a fairy world, but it’s like an anthropological museum because you invoke the forgotten cultures lost or buried in our unconscious.

HARUMI KLOSSOWSKA DE ROLA — It’s the deepest part of our roots. Our world, whether it’s animal or vegetable, vanished civilizations, our current technological civilization — it’s all tied together. Everything ties in to everything else.

HARUMI KLOSSOWSKA DE ROLA — I don’t like pedestals. They’ve always really bothered me. A pedestal ought to be part of the animal or object. It shouldn’t be visible. In fact, it ought to be as nonexistent as possible.

OLIVIER ZAHM — How did your mother’s Japanese heritage influence you?

HARUMI KLOSSOWSKA DE ROLA — Craft is very important to the Japanese. They have great respect for artisans. For me, whether I’m working with objects or jewelry, the important thing is the handiwork. For instance, I made a head out of embossed metal, which is almost never done nowadays. There are very few artisans who still know how to do it. Suppose you’re making a leopard head out of wood. What you do afterward is take your metal and strike it against the wood until the metal takes on the form.

OLIVIER ZAHM — You apply the metal to the wood?

HARUMI KLOSSOWSKA DE ROLA — Yes. You heat and strike. You have to heat it for every blow. To bend the metal, you have to heat it. If you heat it too much, though, you end up warping everything you’ve done. 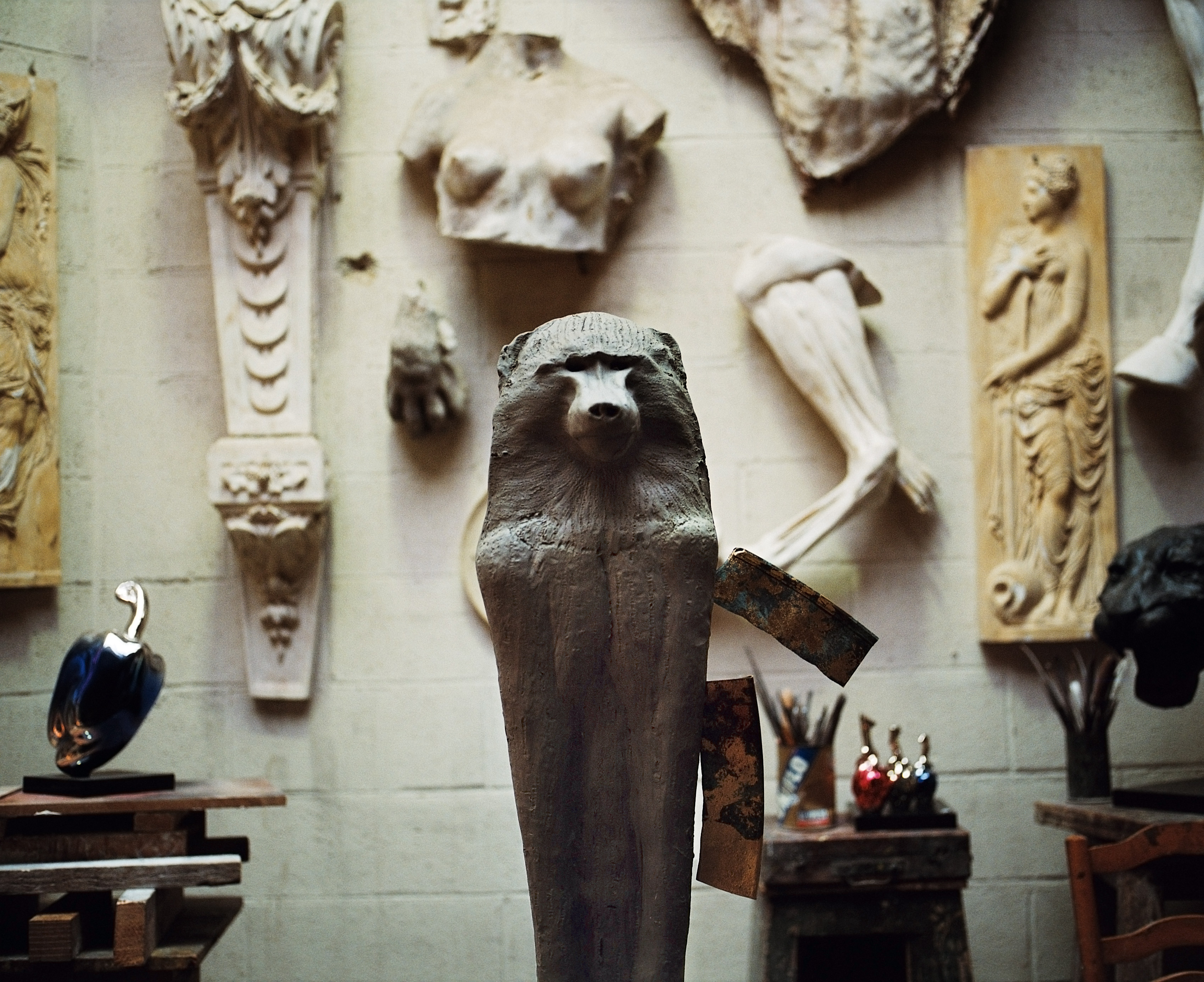 BASE MODEL OF THE BRONZE MONKEY SAKO MA

HARUMI KLOSSOWSKA DE ROLA — I work with mammoth ivory. Ivory has become hard to export and illegal to trade in. Mammoth ivory is sanctioned because the beast went extinct a long, long time ago, and it turns up in the frozen tundra of Siberia.

OLIVIER ZAHM — Would you say that your objects are chic?

HARUMI KLOSSOWSKA DE ROLA — No. That’s too superficial. What matters to me is making unique pieces. It’s exclusivity. Things that are handmade are always unique. You can never reproduce the same thing. Even if certain animals recur, there are always variations.

OLIVIER ZAHM — Do you see yourself as an artist or an artisan?

HARUMI KLOSSOWSKA DE ROLA — In Japan, there was a very famous potter, Kawai Kanjiró, who used to say that it wasn’t worthwhile for him to sign his works because they were identifiable by their craftsmanship. He preferred to take the anonymous side of the artisans. For him, calling himself an artist was too egotistical. This relates to the idea of imperfection, where the object isn’t completely finished, or even completely successful. Kawai Kanjiró told the story of a man who goes to buy a vase for a friend but finds it too beautiful, too perfect, so he breaks it by dropping it, glues it carefully back together, necessarily leaving a few cracks visible, and then adds a line in gold leaf. The vase has now lost its straight and harmonious lines and its perfection as well. The friend thanks him, saying: “Only a Japanese person could understand.” Japanese art is always twisted. There are never any perfectly straight lines. It’s the beauty of imperfection. That touches me very deeply. 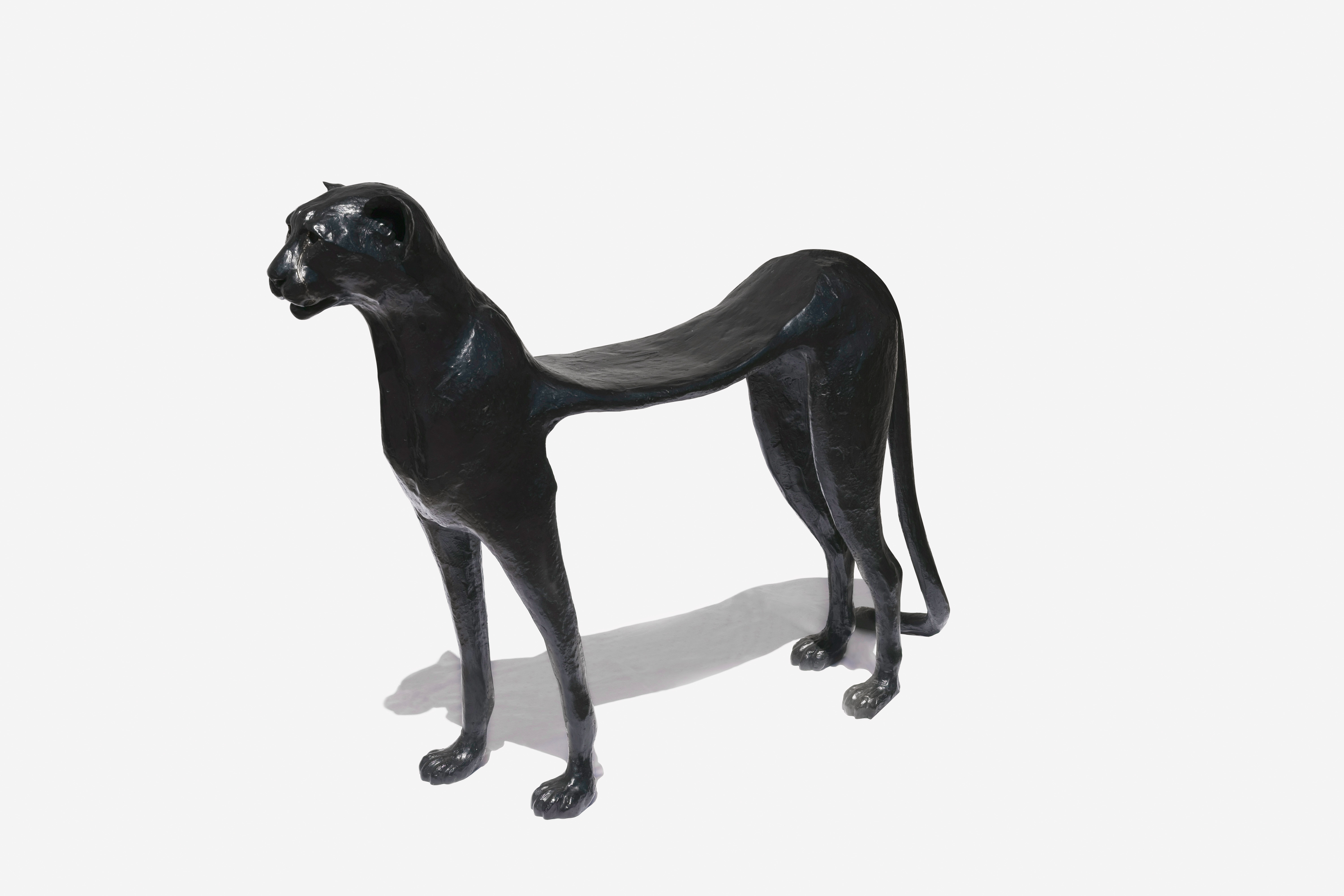 OLIVIER ZAHM — That feeds into the question of time.Your jewelry conveys a calming temporality. To wear jewelry isn’t just to put on a bit of finery, but also to play with time. Do you wear your own jewelry?

HARUMI KLOSSOWSKA DE ROLA — Yes, I have a snake ring that I wear.

OLIVIER ZAHM — Is a piece of jewelry a talisman, a form of protection?