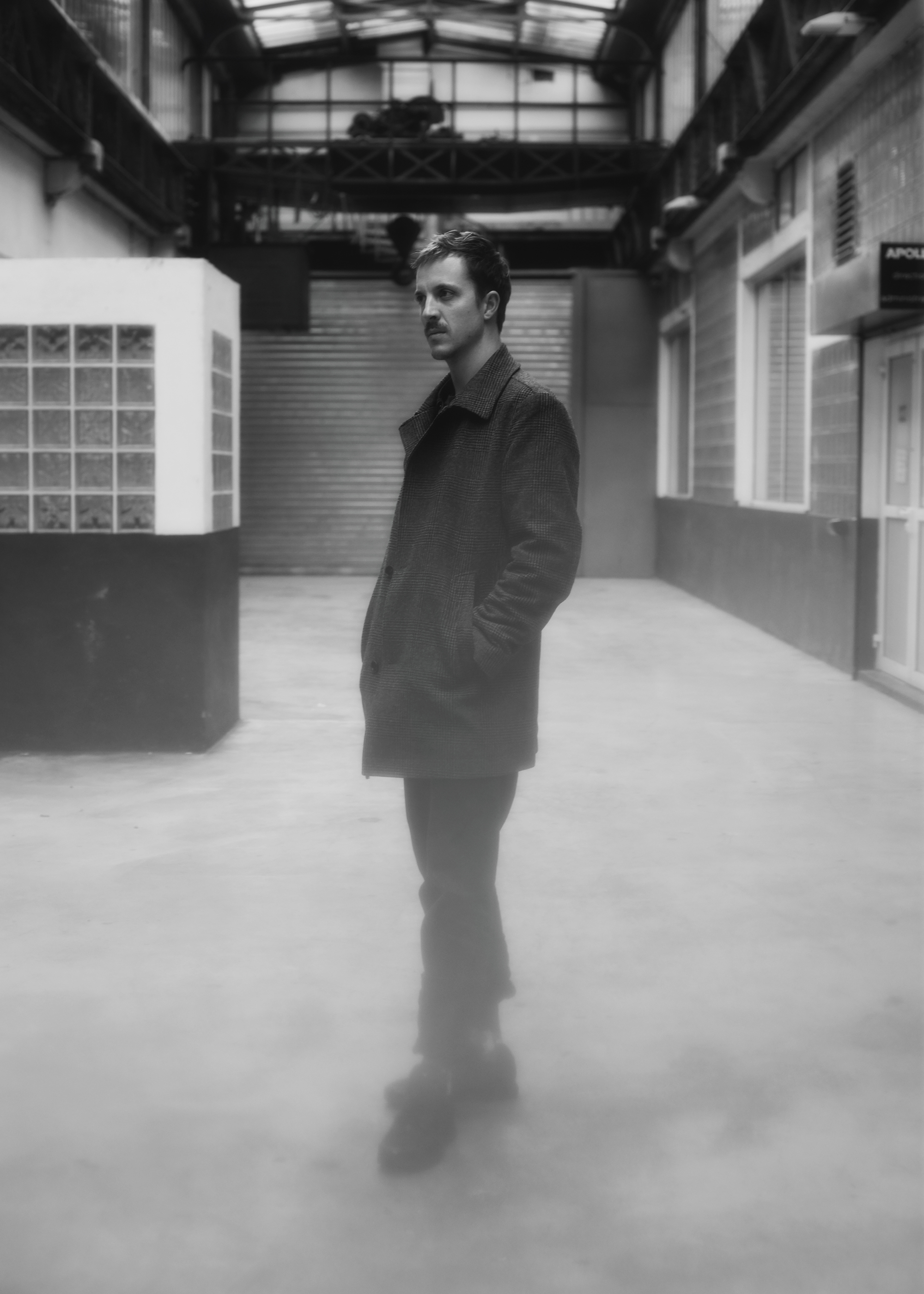 ANNABEL FERNANDES — Your studio is in République, in the center of Paris, away from the intimidating Avenue Montaigne. With street culture filtering into the catwalks, does your location impact your designs at Y/Project?
GLENN MARTENS — The brand is about daily life. Living and working in hot spots, like where we are on Rue du Faubourg-du-Temple, gives you an eclectic view on life. We are situated in a melting pot. It’s very intercultural, which in my view reflects what the society of 2016 should be and what the brand actually also wants to reflect. Just being on the street and people-watching is so refreshing. It’s all the inspiration I need, so in the end I don’t need a mood board.

ANNABEL FERNANDES — It’s true that in your studio, you don’t have any mood boards.
GLENN MARTENS — We make fabric mood boards, rather than visual mood boards. For the womenswear collection, we were influenced by Queen Elizabeth I, so we used a beautiful hand- woven British tweed from Harris Tweed — the supplier for the Queen of England — which is an old-fashioned house that I love. In contrast, we also used nylons and snakeskin. It wasn’t at all a translation of her style, but about the heaviness of the image and her personality.

ANNABEL FERNANDES — Tell me about growing up in Bruges. It seems to inspire your work.
GLENN MARTENS — It was a metropolis in Europe back in the 14th and 15th centuries, much bigger than Paris, but it stopped developing and growing. So nothing has really changed since the Middle Ages. There’s not much happening there, but with its impressive Gothic architecture, it became a tourist attraction, making the city centered on consumption. You have Christmas stores that are open all year long! It’s this big clash that’s super- interesting to me. I guess that’s something that’s translated into my personal work and even my personal tastes. 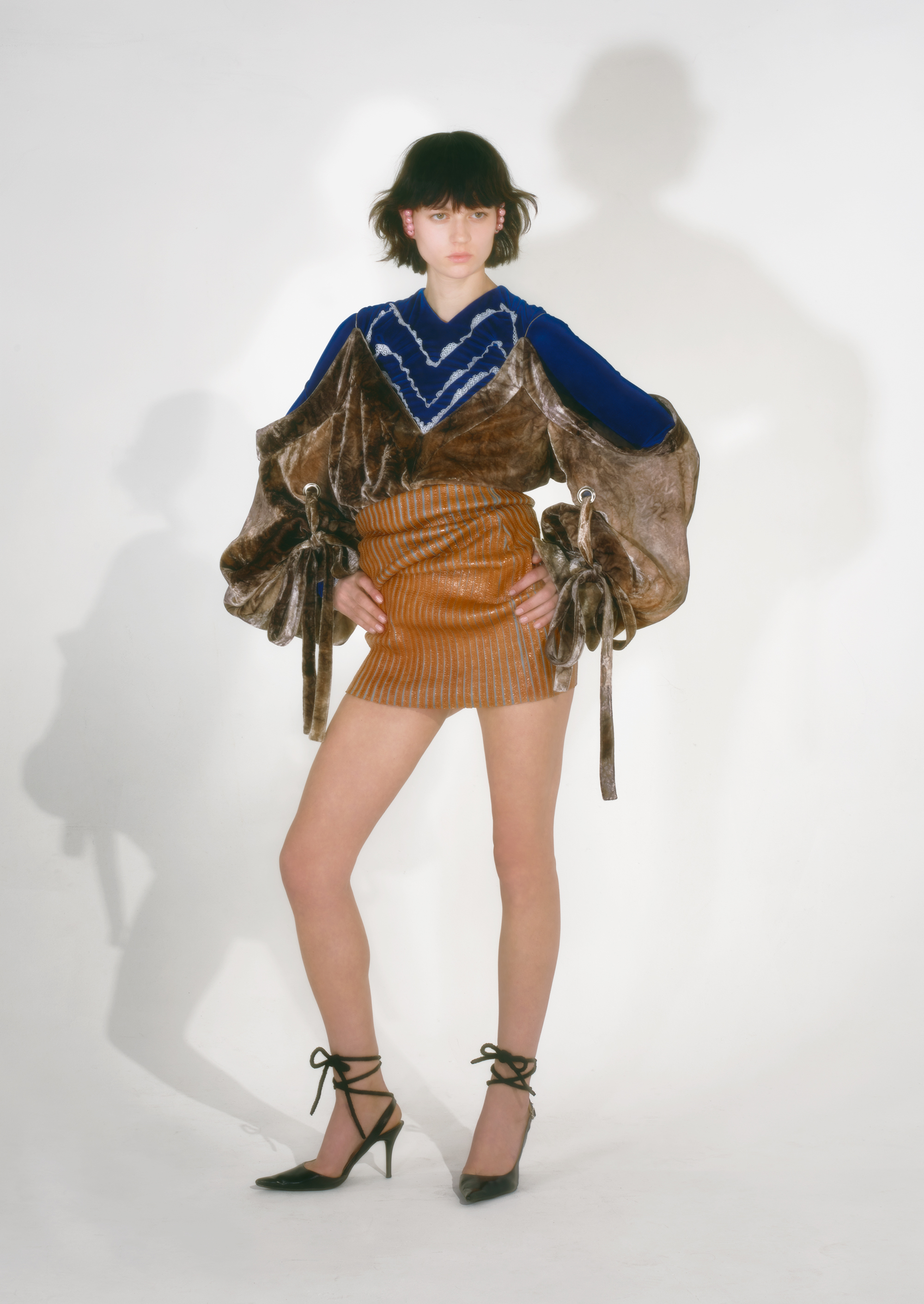 ANNABEL FERNANDES — If we speak of influences, I see romanticism that has historical references, as well as a ’90s alternative radicalism. How do you connect these influences?
GLENN MARTENS — There’s no rule. It just happens. We do what we want and try to find some balance in be- tween the extremes. It’s a very emotional process, which I can’t really ex- plain. We keep on pushing and mixing until, at a certain point, it all makes sense. That’s when we stop.

ANNABEL FERNANDES — At first, you came from an interior architecture back- ground. How did you then get interested in fashion?
GLENN MARTENS — As a child, I was obsessed by historical figures. I was drawing full silhouettes focus- ing on the clothes, but not in a fashion way, more like I was trying to imagine how Marie Antoinette would be dressed. I was do- ing my own variation of a Baroque dress. In my final year of interior architecture, at 21, which I thought was much too young to start work, I dis- covered Antwerp’s Royal Academy of Fine Arts on a school trip. That’s how I really got to know that in Belgium we had this interesting fashion academy. I never thought at the time that fashion was something we could study.

ANNABEL FERNANDES — You didn’t know about the Antwerp Six?
GLENN MARTENS — no idea! I just knew about Karl Lagerfeld and Alexander McQueen, but I wasn’t following it. I was much more interested in music and art. After I saw the academy, I thought fashion could be interesting. So I went from one day to the other to the entrance ex- ams. I went to the exams with sketches of interior architecture — more specifically, sketches of chairs and buildings. When I was there, I got this smack in the face because there were almost 400 people trying to get in from all over the world, and only 70 people get accepted. And there I was with my five sketches of a chair. I thought it would be the biggest failure ever, but I got in for some kind of strange reason. I secretly think they accepted me just because I had the build to be the fitting model for students of the years above me. 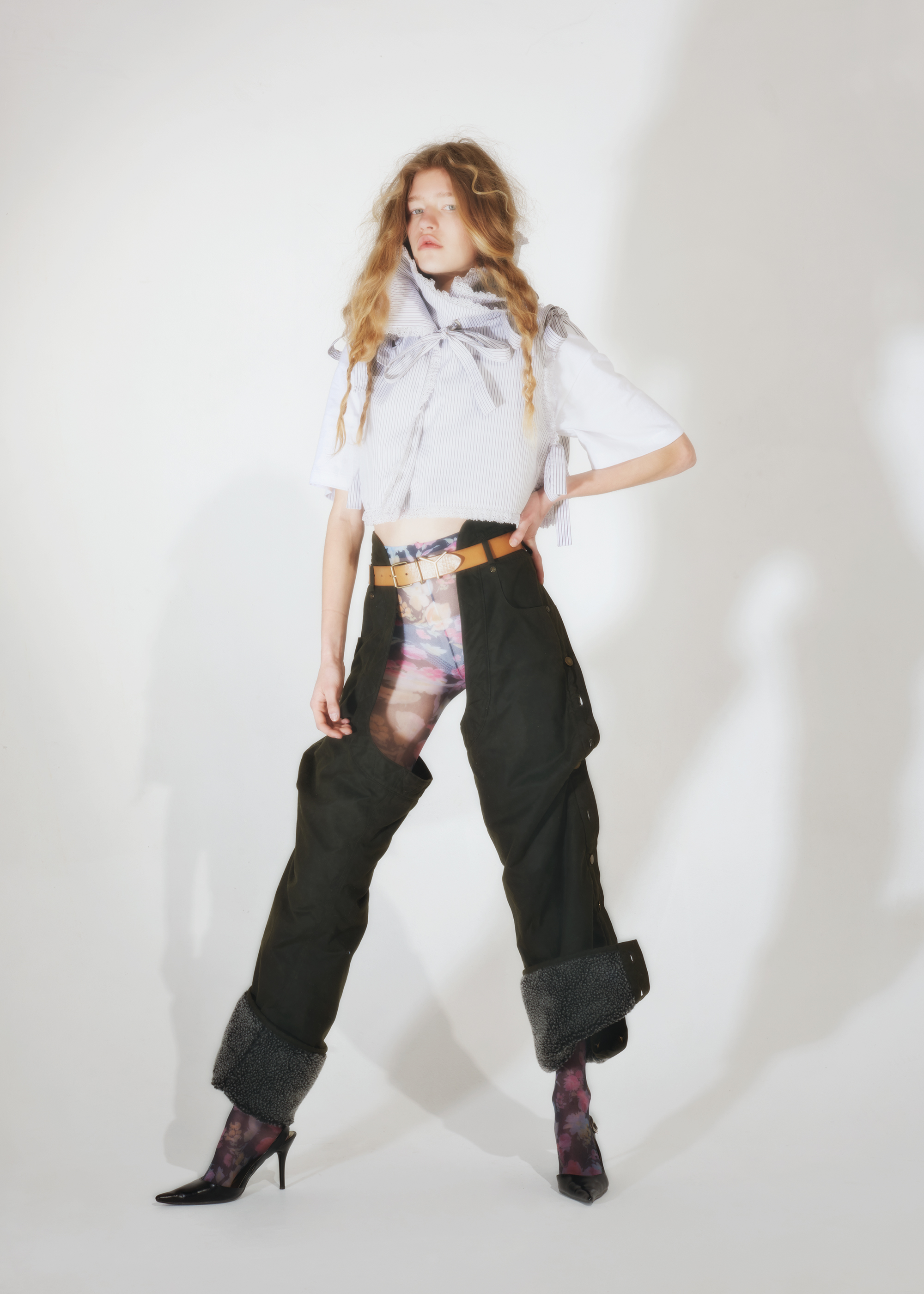 ANNABEL FERNANDES — Experimentation in cut and construction seem, then, to come from your time study- ing interior architecture.
GLENN MARTENS — In the be- ginning, I really didn’t get the difference between fashion and architecture, so my first designs at school were like buildings on legs. I think it’s true that this conception of architecture around the body is sometimes prominent in my work, but of course now I’ve developed it into clothes.

ANNABEL FERNANDES — You once worked at Jean Paul Gaultier. What did you learn from him?
GLENN MARTENS — He’s obviously been one of the biggest stars, but it’s true that today we don’t respect enough what he really stands for. I was really lucky I was picked in my final year to work for him. The archive of Gaultier is beyond amazing. Vetements takes over from Margiela, but Margiela took over from Gaultier. He was an inventor. The most impressive thing I learned from him was that he was really enjoying his work after having a career for almost 40 years. I think you have other houses in Paris, amazingly respected houses, which are known to be trendsetters, but I think the pressure of being such a trendsetter, probably, for the designers and teams, can be re- ally poisonous for the work environment. While I think that at Gaultier, there was nothing like that whatsoever. He was really happy to work there. That’s how I try to do it at Y/Project.

ANNABEL FERNANDES — Before Y/Project, you had your own namesake womenswear label. Can you tell me more about this?
GLENN MARTENS — Glenn Martens was basically a one-man show. I had to man- age the studio, production, press, and sales mostly by myself. It all went well — we had our stores and a good follow-up in the press — but after three sea- sons, I do think I slightly burned out.

ANNABEL FERNANDES — You came in as creative director [of Y/Project] in 2013, taking over after the founder Yohan Serfaty died of cancer. How have you reestablished the brand in those two-and-a-half years?
GLENN MARTENS — When Gilles Elalouf, the CEO of Y/Project, asked me to take over the brand, I said no be- cause I thought I couldn’t continue the work of Yohan. Historically, the brand was very dark, a lot of leather and a lot of black. It had the same clientele as Rick Owens, so I thought that as a new chapter it would be interesting to have Y/Project be more fun and playful. 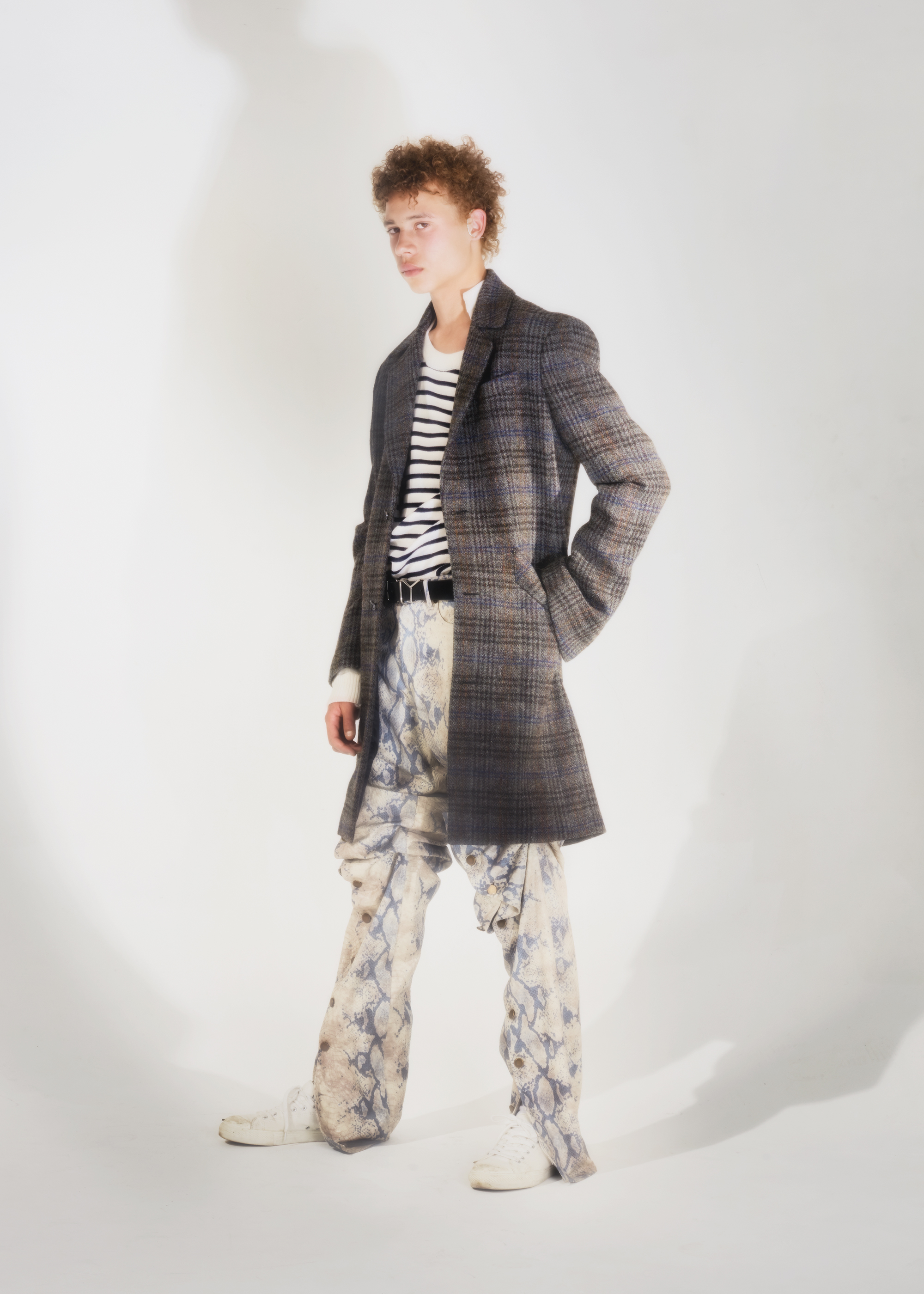 ANNABEL FERNANDES — Y/Project ventures into vulgarity, the absurd, and chaos, mixing not only various fabrics and cuts, but also style and references. Why did you steer the brand in this direction?
GLENN MARTENS — It’s all about freedom. We take any reference we like, regardless of era or subculture. What they have in common is this quirky mix of anything. We want to have fun and make fun clothes. It’s the kind of attitude I try to project onto my personal life. I’m happy with almost everything, and I feel comfortable in most situations. I guess that’s why I’m constantly pushing my limits, in search of whatever is frightening or challenging. This is exactly the starting point of most of my designs. We take elements we initially don’t like and try to reinterpret them into something we love. During fittings, we’re constantly questioning ourselves about whether we’re crossing the line or not.

ANNABEL FERNANDES — Y/Project started as a menswear brand. Historically, men’s clothing is more conservative. What do you think you bring to men’s fashion?
GLENN MARTENS — Everything has been done and redone. I don’t think I really in- vent things. I just free things.

ANNABEL FERNANDES — Regarding the unisex aspect of your work, you don’t seem to care about the difference of gender when you design.
GLENN MARTENS — I see men’s and women’s as one big overlapping collection. We, of course, have some very masculine pieces and some super-feminine pieces, but at the end it’s up to the customer to decide what fits her or him.

ANNABEL FERNANDES — Rihanna is a fan of the brand. She’s currently wearing a custom Y/Project suit for the finale of her Anti world tour concerts.
GLENN MARTENS — The woman does not seem to give a shit, and that’s one reason why I love her. Mel Ottenberg does her styling and is somebody I respect, so I’m proud to have his support. How they work together is really as a great team. What I think is fantastic is that she is al- ways herself, but every day she has a totally different look and makes a totally different statement.

ANNABEL FERNANDES — You showed in a dilapidated library of the Lycée Charlemagne, founded by napoleon. How do your show venues, in general, complement your clothes?
GLENN MARTENS — This historical library in ruins was beyond amazing! I was quite stressed that the few remaining frescoes would col- lapse because of the bass of our music. Before, we showed in the music venue Gibus, which was literally six floors down from our studio. very convenient, obviously. We always try to find something unexpected. It’s quite tricky in such a saturated town as Paris, especially when you’re a small brand with limited budgets.