A surprise awaits as we enter the Cité Internationale Universitaire de Paris: there is no security checkpoint, nobody to search us. The tense political climate and increased police presence, so evident everywhere else in the French capital, don’t seem to exist here, as if there’s no need for them within these walls. The Cité Internationale is fenced-in, yet open. A certain serenity reigns, and we will experience this quasi-anachronistic sensation again and again, for other reasons, during our lengthy perambulation through the heart of these exceptional 34 hectares.

We should begin by noting that by 1918, France had lost a third of its student population to World War I. The war had been a massacre, a descent into absurdity that would traumatize the country forever after. From it, the writer Louis-Ferdinand Céline would spin one of the greatest books in French literature, Journey to the End of the Night, and many men and women — intellectuals, scientists, and businesspeople alike — would try to find ways to prevent anything of the sort from ever happening again. In 1919, France’s minister of education, André Honnorat, introduced an initiative to create campuses for both French and foreign students. The aim was to contribute to international peace by building a place where the world’s youth could learn to live together. Thanks to the help of generous philanthropists like the industrialist Émile Deutsch de la Meurthe, the first cornerstone was laid in 1925. Since then, three major construction phases have produced a total of 40 residences, each representing a different country and funded through a combination of sponsorships and subsidies. 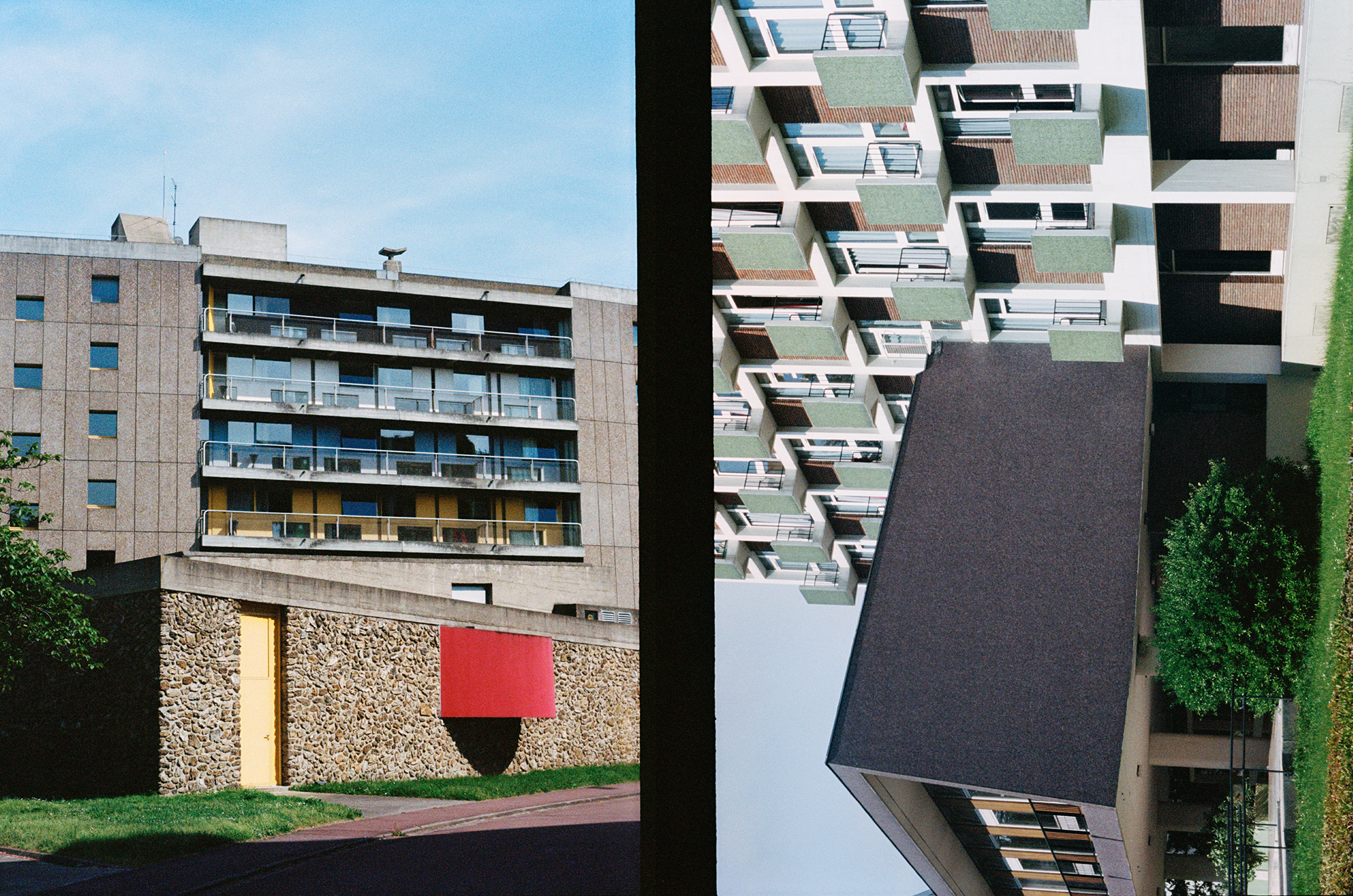 Crossing the threshold of the Cité Internationale, we might believe ourselves in familiar territory. Complete with French-style garden, the imposing Maison Internationale — a Franco-American joint venture, and a mini replica of the Château de Fontainebleau — presents a not unexpected post-monarchy academism. The spirit of the Restoration would seem not so faroff, were it not for the many young foreigners from all over walking about. In the span of a few minutes, we hear Chinese, Swedish, Arabic. The atmosphere is transversal; the groups are mixed. Where many have gathered to talk, the conversation takes place in pidgin English-French. The Cité is a world unto itself.

We begin to wonder whether the Cité’s assimilation of all these nationalities provides a more viable model than France’s sacrosanct ideal of Republic-fostered integration. There is evidence for this in the architecture, in the way all the incredible residences are laid out around that famous, French-inspired Maison Internationale. Just as the Cité seems a linguistic mosaic, what we see is a combination of styles. Among the structures are architectural gems. Two residences are classified historic monuments: the Fondation Suisse, designed by Le Corbusier (responsible also, with Lúcio Costa, for the very Mondrian-esque Maison du Brésil); and Willem Marinus Dudok’s Collège Néerlandais, his sole building on French territory. The orthogonal Collège, with its geometric volumes, spare aesthetic, and 1920s modernist architecture, has just undergone a thorough restoration. France’s supplementary historic monument list, moreover, includes three other residences: the Maison du Brésil, and certain parts of the Fondation Deutsch de la Meurthe (with their surrealist allure of haunted English manors) and the Fondation des États-Unis.

Among the most impressive buildings is the former Maison d’Iran, now the Fondation Avicenne, designed by a team comprising the famous architect Claude Parent, André Bloc, and two Iranian architects, Hedar Ghiai and Mossem Foroughi. The structure consists of three steel gantries 38 meters tall, within which fourstory boxes are suspended to form two blocks of lodgings. Three of the façades are windowless. Massive spiral staircases are clapped like some improbable spine to the side of the otherwise perfectly geometric ensemble. The building is currently under renovation. From the Maison Internationale, the Fondation Avicenne can be seen across the Cité and forms a sort of background. Thus the two buildings provide a visual frame from the get-go, their architectural divergence serving to bookend the range of possible constructions we will find, and thereby generating a great sense of freedom. 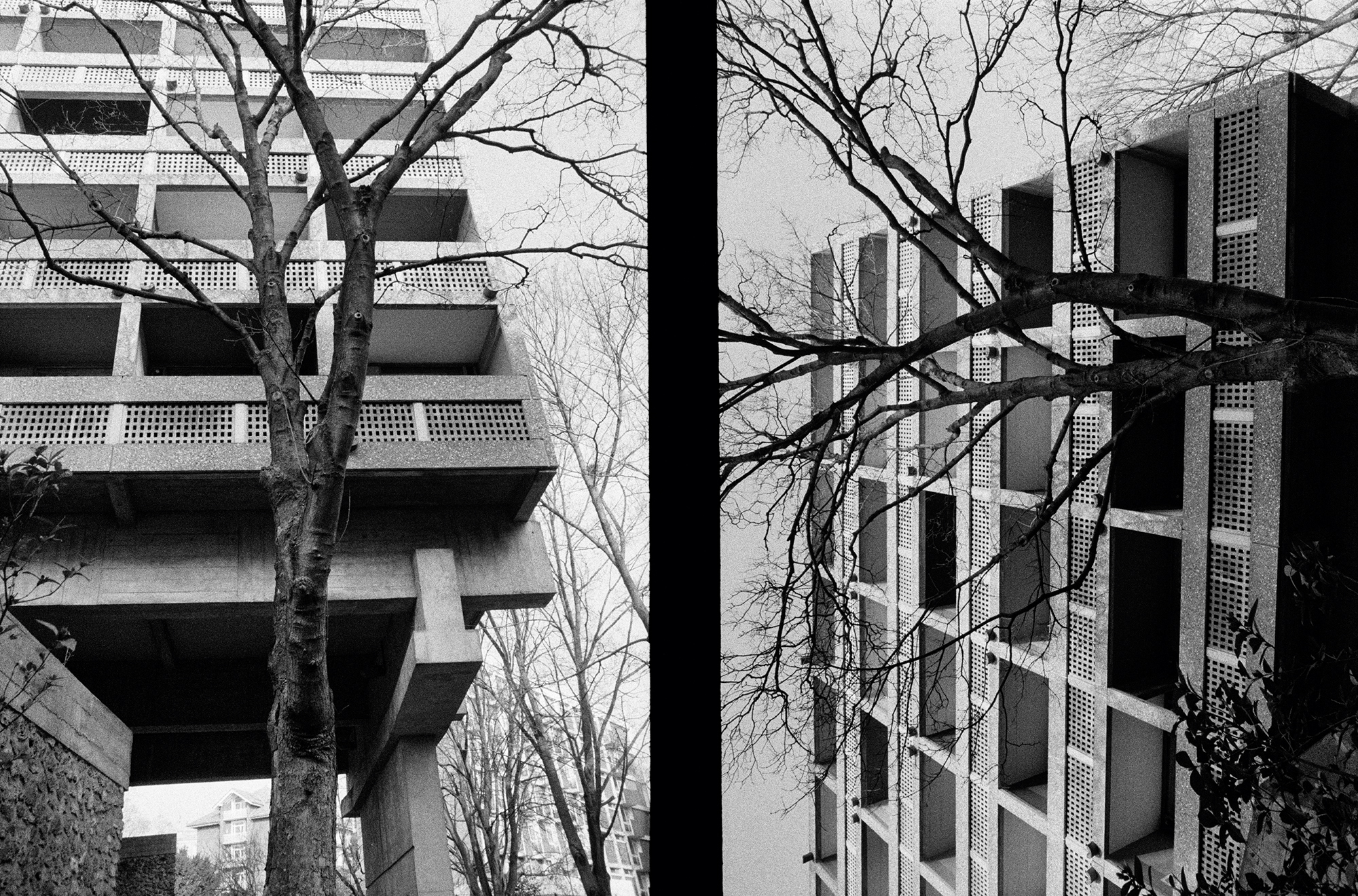 The space is so vast that in looking over these different architectural structures, we do not immediately detect an association between them or any sort of montage. There is less a collusion than a sense of crossing; the residences’ identities do not so much dissolve in the mix as reinforce one another. The mega-campus leaves space for the flow of people. Its phenomenal expanses provide sweeping views over collective areas: the libraries and sporting fields. The cedars, willows, and oaks provide both vanishing points and opportunities for the eye to rest. At the far end of the Cité stands the Fondation Danoise and the magnificent Maison du Japon, built according to traditional Japanese style and featuring two large frescoes by Foujita in the lobby. The perspectives here can muddle the mind. Not all the pairings are felicitous, but as we take things in, we realize that pairings are not the point. Though perhaps emblematic of their respective countries, the residences actually amount to the fulfilment of a collective vision. A case in point is the Maison du Portugal-André de Gouveia, designed by José Sommer-Ribeiro and named in tribute to a 16thcentury Portuguese humanist. Once again, we have a palpable sense that the essence of the endeavor lies in the simple juxtaposition of residences; they are the result of a utopia quickly revealed to have actual substance.

By 2020, there will be 10 new residences on 16,000 square meters of additional land. And before then, construction will be complete on the Maison de la Région Île-de-France, a structure made entirely of steel and glass. It will stand next to the Maison du Cambodge, where magnificent man-monkey statues flank the front steps. In all, there will be some 1,800 new lodgings.

As we leave the Cité Universitaire, we notice that children have taken over the French garden’s conically trimmed bushes and are using them as Indian teepees.
Farther on, in front of the Maison du Mexique, young men and women are fencing with plastic swords, like clashing bands out of Game of Thrones. A jogger zips past in a fluorescent jumpsuit, with a book she’s reading in one hand and a cellphone clasped in the other. Everything in every way seems to go by slowly, but a deep coherence knits the whole together, with the same spirit of coexistence and philanthropic curiosity that drove the project at its genesis.