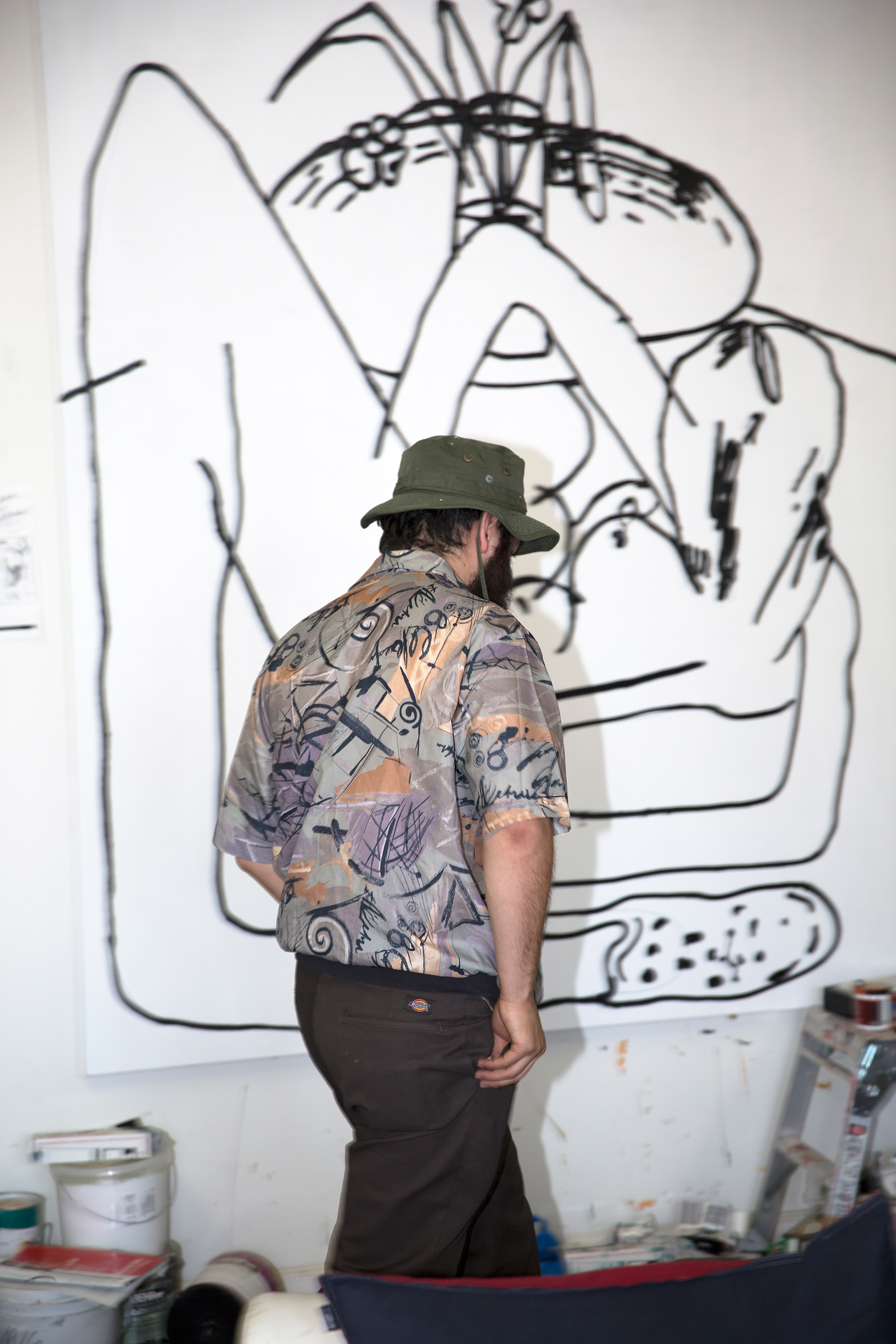 BILL POWERS — We have a mutual friend who said she first met you selling sandals on Venice Beach.
ALEX BECERRA — During “Made in LA” in 2012, I got invited by Ali Subotnick to be part of the Venice Beach Biennial. She asked more than 50 artists to be vendors along the boardwalk at the beach. In my little booth, I sold these custom, handmade Huaraches that were made out of acrylic paint. They looked functional, but if you put them on, they’d rip apart after five steps.

BILL POWERS — For your solo show in Berlin this summer, you included a giant painting of your dog?
ALEX BECERRA — Of my dog, Fletch.

BILL POWERS — Is he named after the Chevy Chase movie?
ALEX BECERRA — Yeah. At my studio in LA, he’s always with me. Not too many of my friends live around this part of town, so he was my only companion. I made this painting of him while I was in Berlin.

BILL POWERS — Were you feeling the ghost of Martin Kippenberger over there?
ALEX BECERRA — Not really, but I did check out this Albert Oehlen show at Max Hetzler. And a Joseph Beuys show at the Hamburger Bahnhof. I also got really into buying records and weird art books.

BILL POWERS — Any specific LPs?
ALEX BECERRA — Bizarre, experimental stuff like Nurse with Wound, L. Voag, and then punk or post-punk from Berlin that was happening before the wall came down, late ’70s and early ’80s. 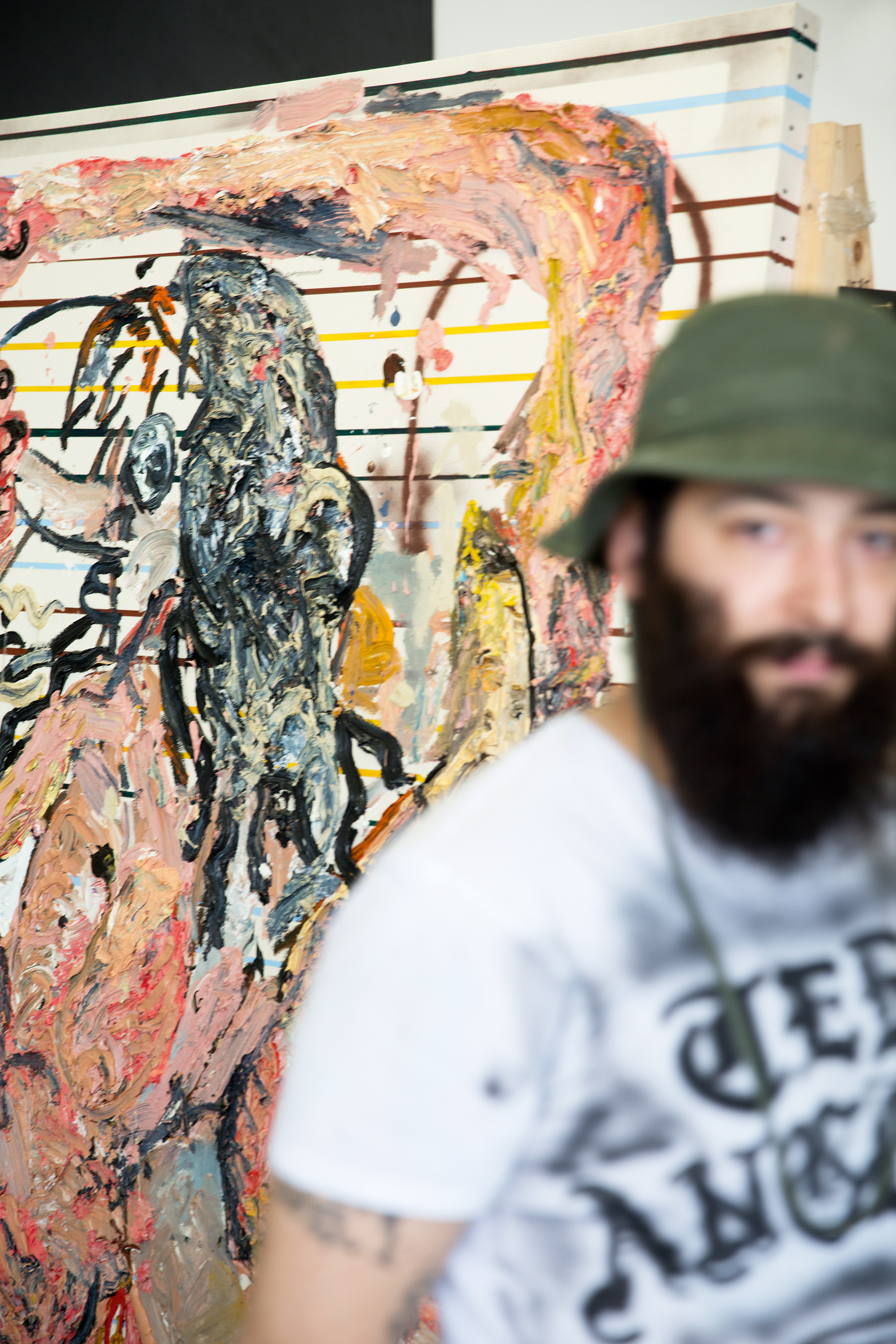 BILL POWERS — Did you ever get hassled at all being a Mexican kid with a big beard?
ALEX BECERRA — After the bombing in Brussels and the right wing burning refugee camps, you could definitely feel a level of angst in people. It was never directed at me as aggressively as I’ve been hassled in the States, but I remember riding the S-Bahn late one Saturday night, and this drunk dude was talking shit about me in German, which I couldn’t totally understand. Then at the end, he shouted, “Coca-Cola Pepsi fuck you!” It was hilarious. I wish I knew what he was ranting about.

BILL POWERS — You are first-generation American, right?
ALEX BECERRA — Technically, I guess. My mom was born in Piru, California, but my dad was born in Mexico.

BILL POWERS — Are they freaked out about this idea that some Republicans want to build a giant wall between Mexico [and the US]?
ALEX BECERRA — They live in a super small farm town, so those type of politics aren’t as amplified for them, at least from my perspective. I think my friends in Berlin were more concerned about Trump and the political situation in America than I was.

BILL POWERS — Your first big painting show in Los Angeles was called “The Problematic Whores” at ltd gallery?
ALEX BECERRA — The title was a tongue-in-cheek thing and a way for me to deal with figuration in my head and in my work. When you say it in Spanish, “Las Putas Problematicas,” the words sound “off” or the phrase needs a longer sentence to explain itself. It’s also fun to say and doesn’t literally translate to “The Problematic Whores.”

BILL POWERS — Some of your paintings can be quite sexually explicit.
ALEX BECERRA — They’re fantasies that only make sense in art — the absurdity of them, they’re so out of order. As long as you’re not a pervert in real life.

BILL POWERS — Do you ever draw from life?
ALEX BECERRA — For my show at Shane Campbell next year, I plan to. I’ve done drawings of girls at my studio in strange poses, but a lot of them come from found photos or sketches right out of my head. Or I take images from this escort magazine called LA Xpress, then exaggerate the positions. The beautiful thing about art and painting is playing with these types of situations.

BILL POWERS — Which is kind of a funny name for a band with four members.
ALEX BECERRA — It started with three guys. I guess we didn’t look at it so literally. I’ve always made music since I was in art school, weird little demo tapes. I never had access to proper instruments.

BILL POWERS — You play the saxophone and sing?
ALEX BECERRA — Or sometimes I just play the drum machine or smash two pieces of glass together and run it through some distortion. Tony Mackenzie, T. Kelly Mason, Matthew Clifford Green, and I compose music for the “band.”

BILL POWERS — I heard one song called “Moneybags.”
ALEX BECERRA — T. Kelly and I wrote the lyrics. “Moneybags” is about this down-and-out guy begging his girlfriend for money. He’s explaining that usually he would never ask her for money except this time he really needs it.

BILL POWERS — Are there narratives in your paintings?
ALEX BECERRA — I keep a lot of clutter around in my studio to make art. I like to keep things messy. If you look back at the last four years of my work, I’ve painted my shoes so many times because they’re there and are so fucking boring they can make for good painting. I guess there’s a narrative in that. I’m starting a new painting right now of a garbage bag full of beer cans.