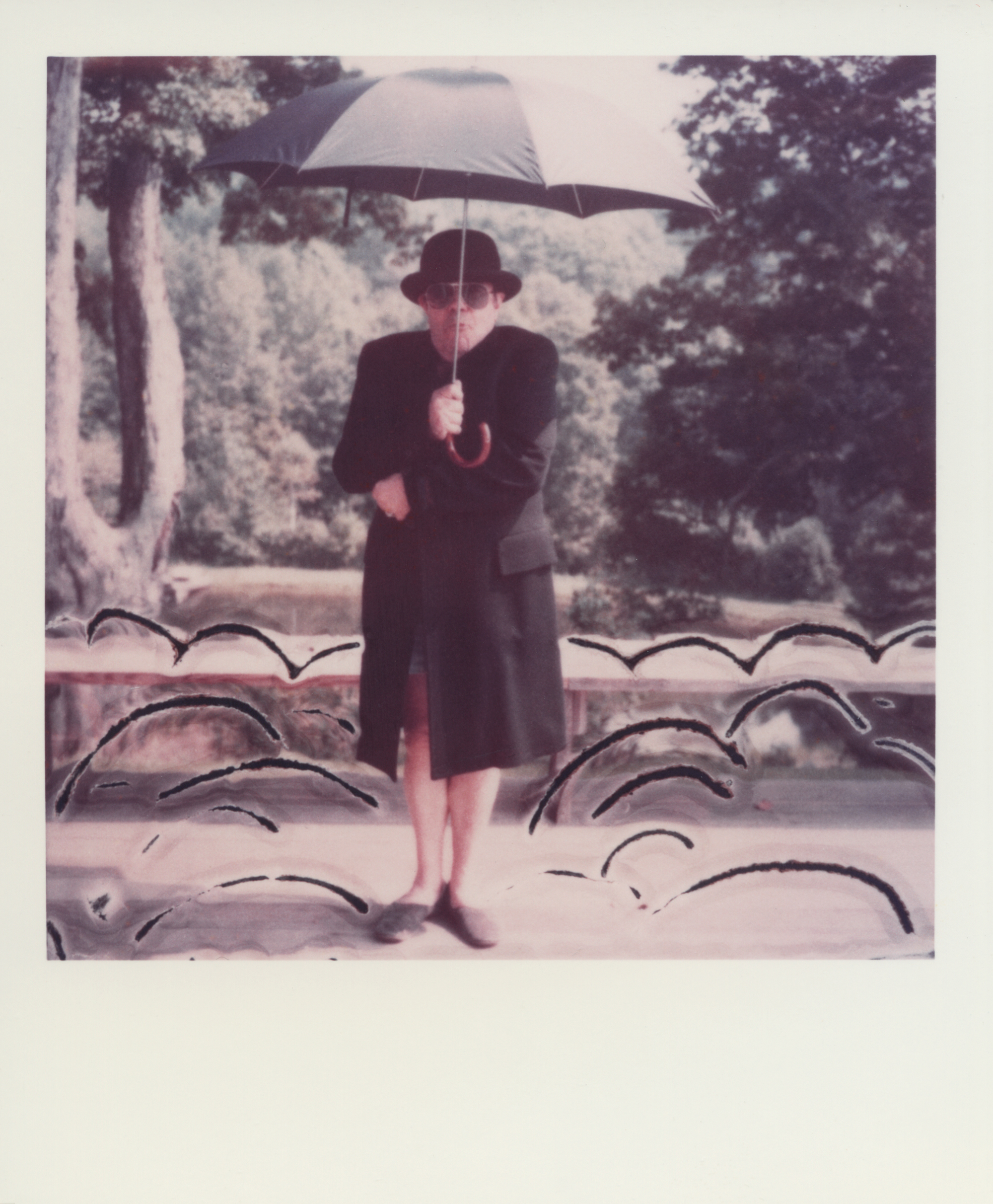 Polaroid of William N. Copley in character for the mock-play<br />The Passion According to Heaven Hill Farm, circa 1980

William N. Copley led a charmed life. An orphan, born in 1919, he was adopted by Ira Copley, the conservative owner of 16 newspapers in Chicago and San Diego. He was sent to Phillips Academy Andover and to his adopted father’s alma mater, Yale University. He hated Yale and espoused liberal politics, so he left the university to join the US Army. He briefly toyed with politics, then in 1946 wedded the daughter of a famous test pilot. His wife’s sister was married to John Ployardt, an animator at Disney Studios and a serious aficionado of Surrealism. The two men met Man Ray, who introduced them to Marcel Duchamp.

Copley worked as a journalist for his father’s newspapers, but he and Ployardt opened Copley Galleries, where they sold Surrealist works, guaranteeing 10 percent sale from each exhibition. With few sales — Californians did not buy art — Copley was obliged  to tap into his inheritance and personal resources to buy works by René Magritte, Max Ernst, Yves Tanguy, Roberto Matta, Joseph Cornell, Man Ray, and Duchamp (at prices that would later make him feel like a robber baron). Copley’s growing Surrealist art collection inspired him to paint and draw, to move to France, and to conceive his own art in a style that combined America’s comic-strip humor, prefiguring American Pop, with Surrealism’s revealing eroticism. Marcel Duchamp, avatar of Surrealism, gave his blessing. “You should continue,” he said. Copley shortened his artist’s name to CPLY , and painted and drew car images in his direct, almost naive graphic style. Soon he was painting scenes right from the pages of pornography. He gave a later series of American flag paintings, possibly inspired by Jasper Johns, a strongly sexual twist. His first exhibition was held at Royer’s Book Shop (which sold pornography out of its back room) in Los Angeles in 1951. In 1954, he and his second wife (of six) created the William and Noma Copley Foundation, whose advisors were Marcel Duchamp and the composer Darius Milhaud, member of the famed group Les Six. Copley’s terse, funny,erotic paintings began to be collected, beginning with the Stedelijk Museum Amsterdam in 1961. He showed at Galerie Iris Clert, Galleria Schwarz, and the notable Alexander Iolas Gallery in New York City, where he had a downtown loft, and where Andy Warhol, Roy Lichtenstein, and Christo passed his revolving door of visitors. In 1968, he wrote Duchamp’s obituary for The New York Times and donated Duchamp’s Étant Donnés to the Philadelphia Museum. In 1977, he published his memoir, Portrait of the Artist as a Young Dealer. Copley’s unabashed American paintings were evenmore direct than Duchamp’s Étant Donnés, which was fitted with a peephole through which viewers eyed a realistic sculpture of a naked woman. Copley’s easy lines and vivid colors recalled Joan Miró’s swirly abstract lines, devised to conceal sex parts, as well as George Grosz’s crude, pasty characters, who hid none of their baseness. Copley was considered by some to be crude and misogynistic, but his works — like those of his close American friend, H.C. Westermann, who depicted the US landscape’s mountains and motels as the ideal playground for sexploitation — limned America’s ribald sensibility in warm, friendly, colorful, sexual graphic imagery. His was not a noble art, but it revealed the way men often strip women in their minds — as Duchamp first suggested in his great work, The Bride Stripped Bare by Her Bachelors, Even, (1915-23) — but then get it on. Copley had everyone copulating.

He died in 1996 in the Florida Keys, married to his sixth wife, his artistic reputation continuing to rise. In 2016, Germano Celant edited William N. Copley, published by Fondazione Prada in collaboration with the Menil Collection, which exhibited “The World According to CPLY ” this year.