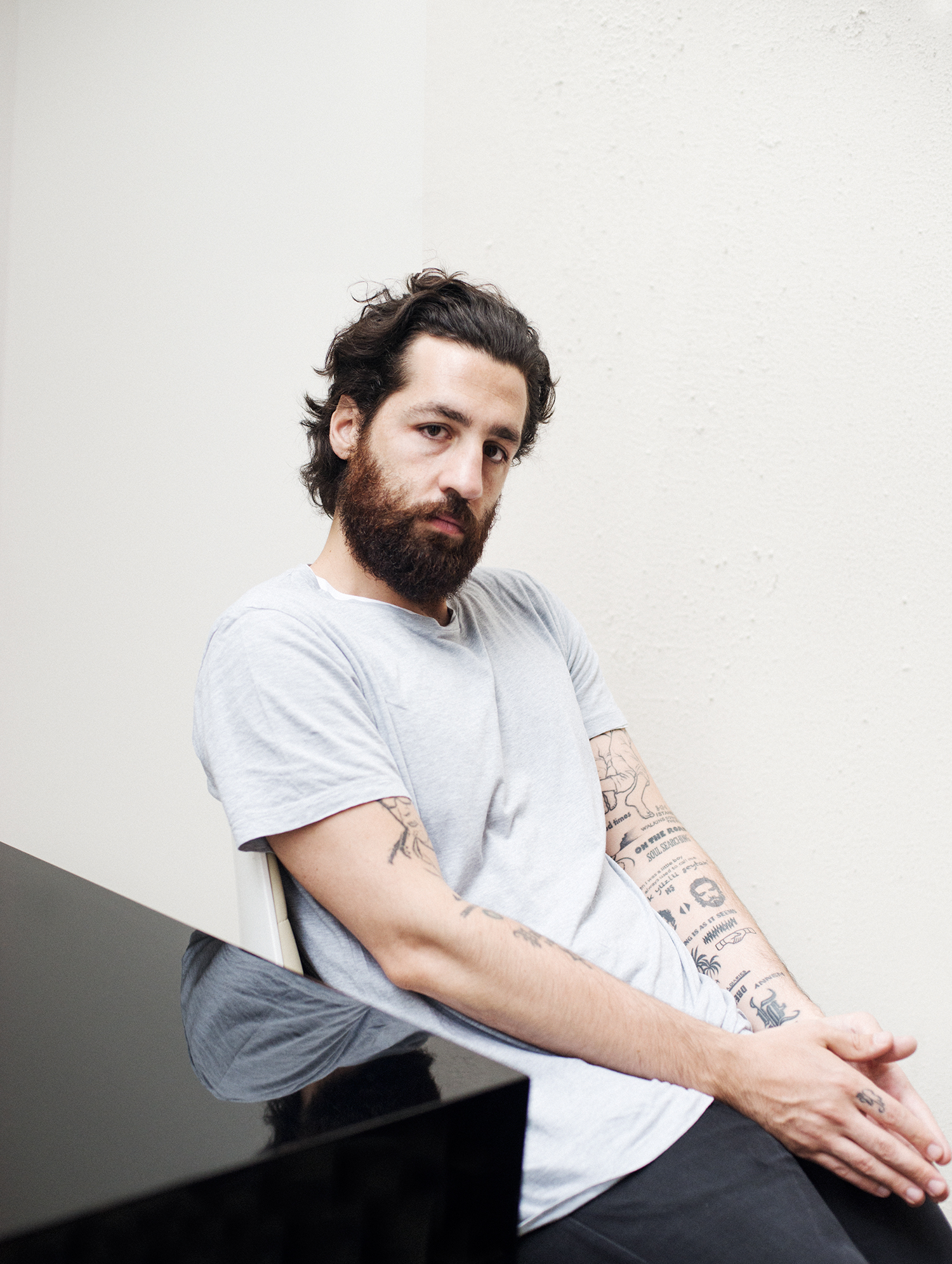 Turkish-born menswear designer Umit Benan’s collections always revolve around strong male archetypes, such as the investment banker, the graffiti artist, or the Italian gentleman. But Benan does not just design his collections around his themes, he also uses them as the setting for his theatrical fashion shows, which have made him a name in men’s fashion.

SVEN SCHUMANN — You always choose a very specific theme for your collections. How important is that for your creative process?
UMIT BENAN — For me, the most important thing has always been what context I want to present my collection in. At the beginning of my career, I asked myself, “What do I want to present?” The answer was not the clothes but rather a scene from 15 minutes of a lifetime. I wanted to find real people, give them a role, sketch for them, and then present that moment. The inspiration is always the most important, and I always sketch the scene that I want to present first. Then the clothes come last.

SVEN SCHUMANN — Jackie Robinson, the first professional African-American baseball player, was the main inspiration for your Fall/Winter 2014 collection “Home Run.” What did that scene for that show look like when you first drew it?
UMIT BENAN — It was about the moment after a game in which the players are leaving the locker room and are on their way to the bus. Originally, the models were supposed to all walk out and get into the bus, and we even found a bus from the 1940s, but it was cancelled on the last day. So it was ’40s style mixed with baseball references. If you put people in uniform, you can’t give them much character, since they’re all wearing the same clothes. The casting will be less strong, and the clothes will get more attention.

SVEN SCHUMANN — Aren’t the clothes supposed to get attention? You do need to sell them, after all.
UMIT BENAN — I know, but this way you can get more emotions out of people. You give more importance to creativity and less importance to the product itself. People are more likely to say, “That’s an Umit Benan man,” instead of, “Those are Umit Benan pants.” That is typically not good if you’re in the business, but I am trying to find the right balance.

SVEN SCHUMANN — Where did the idea to do a collection inspired by Jackie Robinson come from?
UMIT BENAN — Four or five years ago, I was in New York walking down Houston Street and stopped in front of a guy selling pictures. I normally never stop, but he was holding an extremely stylish photo of Jackie Robinson signing autographs at his first game in Cuba. While I was buying one, he brought out other photos of Jackie and started telling me his story. So for one hour I was standing there listening to the guy, and I went crazy for the whole story. I realized that Jackie Robinson was the perfect story for me to be able to give the message “no to racism” through fashion.

SVEN SCHUMANN — How come?
UMIT BENAN — It was about the references. You have a sports reference, you have the 1940s references, you have an American hero, and you have a political ref- erence, since he was the first black baseball player in the major leagues. With these references I was able to present my mentality. Designers have egos, and you always present something that you believe should be in life. I wasn’t trying to make a statement about the fashion industry, but then I discovered that it was the first all-black show ever, so of course politically it raised a lot of buzz, too.

SVEN SCHUMANN — Were you looking at Jackie Robinson’s personal style during the design process?
UMIT BENAN — No, I didn’t find many photos or references from Robinson’s private life. Mostly, it was on the field. But I work off-court. Whenever I’ve done sportswear collections, like the Jackie Stewart collection at Trussardi, it was always off-track. If Thom Browne works on a sports collection, he works on-court. He would present full base- ball uniforms, use that one reference really strongly. Mine is more reality, not just fantasy. So that’s why I had to bring in the style of the 1940s in America.

SVEN SCHUMANN — You said that you had the idea for that collection four or five years ago. How far in advance do you plan the themes for your collections?
UMIT BENAN — All the stories and everything about the collections are written until, I think, 2019 — very precisely and in order. Sometimes, if I experience strong emotions in life, I might change the order. But I work for five or six seasons on a collection, sketching and researching, like, three collections ahead. For the “Home Run” collection, everything was finished six months before, but the story was already finished years earlier.

SVEN SCHUMANN — I guess that makes it impossible for you to react to current trends in the industry.
UMIT BENAN — I go with the story and less with today’s trends. But those things are scary sometimes as well. I wrote this like four years ago, and then one day my brother told me about the movie 42. I went to see it and said, “Fuck! People are going to think that I saw the movie and got the inspiration.” But I’m confident enough that I don’t need to explain to people that that’s not the case. So I just went on with it. Even if the previous season someone did a similar collection, I would say, “Too bad, what can I do?”