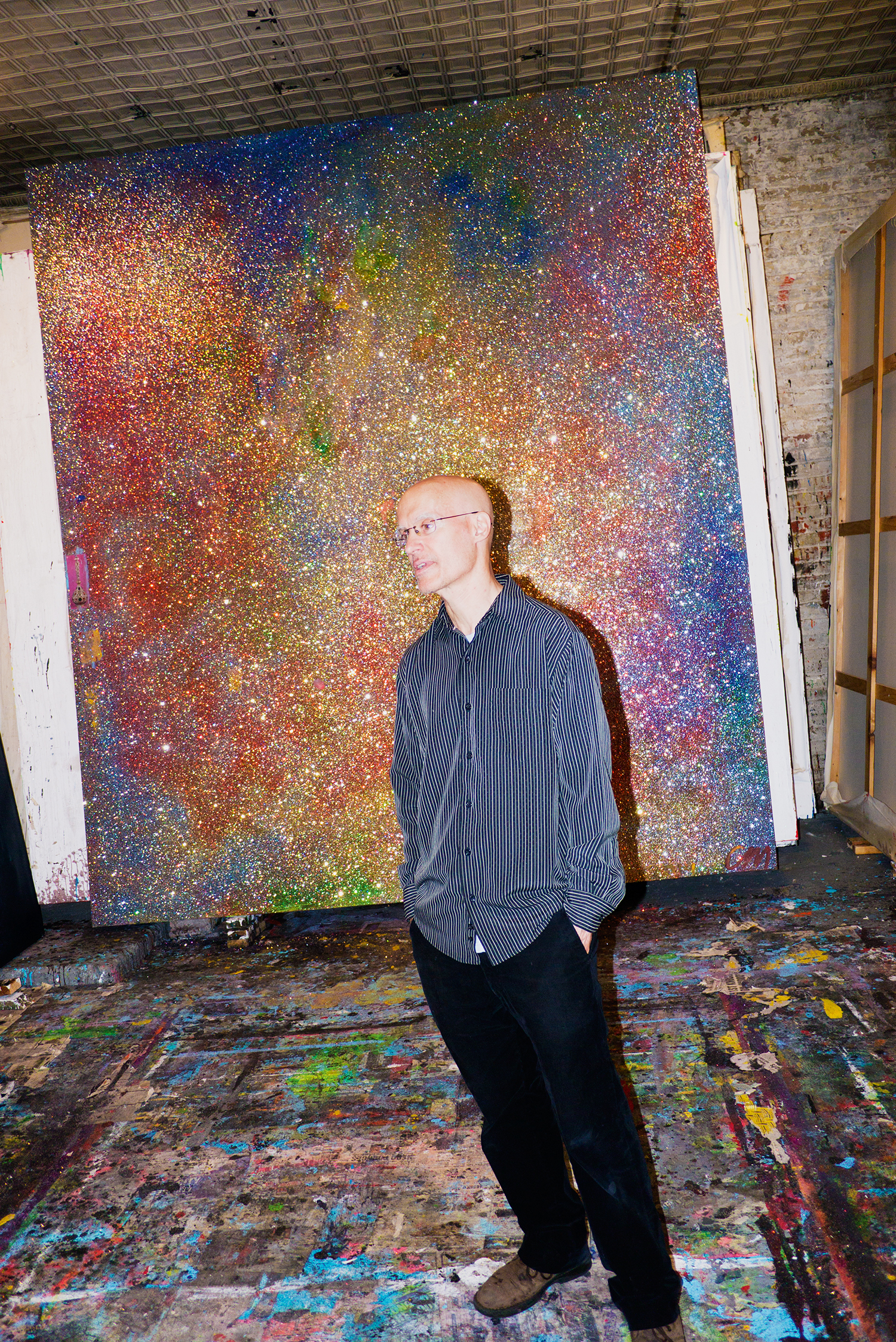 Chris Martin in Front of his pinting Untitled, 2014, acrylic, glitter, and collage on canvas

BILL POWERS — Some of your paintings have T.A.Z. written across the bottom. What does that stand for?
CHRIS MARTIN — T.A.Z. is this great book of anarchist diatribes by Hakim Bey (aka Peter Lamborn Wilson). The letters are an acronym for Temporary Autonomous Zone. The message is freedom; that in the midst of empire, you have to hunker down and find these little pirate utopias where you can express yourself. He’s also in favor of laziness and getting off the clock, get- ting away from the system.

BILL POWERS — On occasion you use vinyl LPs as mate- rial in your paintings or collaged images of musicians. It made me think of the Dan Graham video, “Rock My Religion,” where he views rock ‘n’ roll as a religious experience for adolescents.
CHRIS MARTIN — I remember years ago taking some young German art dealers to a nightclub in Williamsburg where they were playing music from Mali. Everyone was trancing out, and I noticed in the corner two Hasidic young men in full regalia dancing wildly along with the crowd. It’s a religion, sure. And the science is pretty clear on this: that you can change your body chemistry through dance. You can take your mind out of the normal day-to-day and be in the ecstatic present where all the mystical stuff is.

BILL POWERS — The artist Thomas Hirschhorn says that “quantity is quality.” As someone who’s fairly prolific, does that sentiment resonate with you?
CHRIS MARTIN — In some ways, yes, that’s true. The artist who wins in the end is the person who made the most paintings. It’s really a personal sensibility, though, because then you have artists like Mondrian or Morandi who worked in a much more rigorous, controlled manner. I’m more of the Josh Smith or the Andy Warhol school where I do better when I start a lot of paintings. I don’t always finish them, but it’s important to start.

BILL POWERS — You mentioned Mondrian, who famously disliked the color green. Do you have a color you won’t use in the studio?
CHRIS MARTIN — I used to have a very hard time with purple and magenta. But now with my daughter’s urging, I’m trying to use those colors, the ones I previously couldn’t deal with. I remember Brice Marden saying once that purple is a very banal color, and I thought: “What does that mean? How can a color be banal?” But sometimes you have to embrace your own bad taste. When I used to work as an art therapist, I realized how much people love glitter and gold paint and all these things I’d resisted as being popular bad taste. Now, I’m way down the rabbit hole of using glitter and gold.

BILL POWERS — Scale also seems important to you. Do you think we want big paintings now because the world has gotten so small with global communications and air travel? Maybe we want to be overwhelmed by a work of art.
CHRIS MARTIN — It’s not so much to be overwhelmed by a huge painting, but to be embraced by a larger scale. A lot of times I think of my big paintings as being quite intimate. You know, if you walk into a forest, the scale can be gigantic, but it’s not a terrifying thing; it’s a mysterious, intimate thing. Do you ever think about the proper size a tree should be? There isn’t one. It’s just a tree. It’s the size of the world.

BILL POWERS — What is your obsession with Rasta colors?
CHRIS MARTIN — When I was a little kid growing up in Washington, DC, I went to the funeral procession for John F. Kennedy. I saw all these heads of state: presidents and prime ministers.But the one guy who really stood out was the emperor of Ethiopia, Haile Selassie. 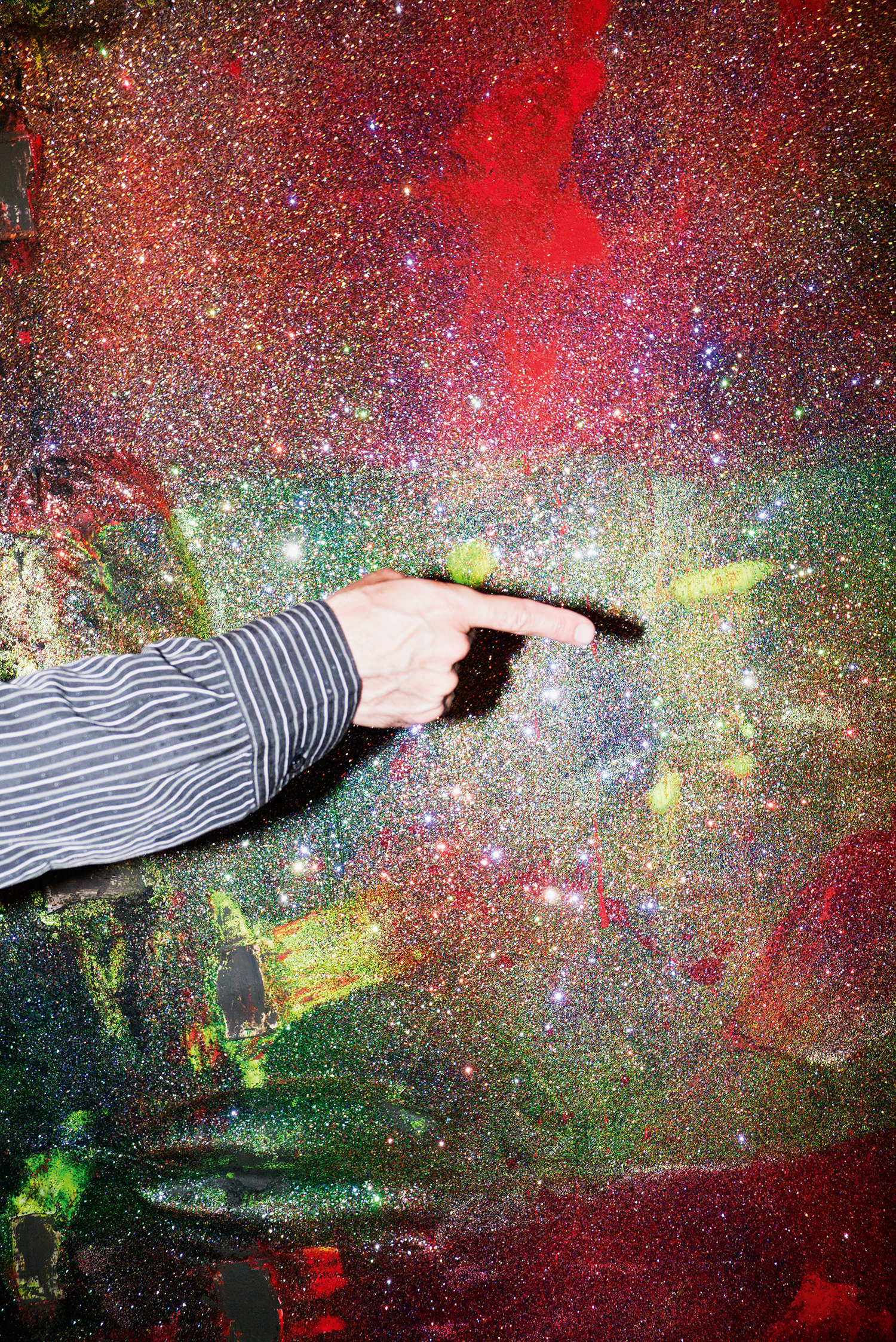 BILL POWERS — And what does that have to do with the Rastas?
CHRIS MARTIN — Well, because they considered him a living god. I mean, I’m not trying to promote any religion. I just love red, yellow, and green. I love those colors. I never get tired of them.

BILL POWERS — Do you ever regret having dropped out of Yale in the ’70s?
CHRIS MARTIN — It’s funny. I was 40 years old when I finally got a college degree. I went back to school to study art therapy, which ended up being a fascinating, beautiful thing for me. I don’t regret leaving Yale when I did. I made some good friends there and played a lot of touch football. Many years later Peter Halley asked me back to teach in the grad school, and I met some great students and really enjoyed it.

BILL POWERS — Who do you consider to be your contemporaries?
CHRIS MARTIN — Well, I talk to Joe Bradley, Mike Williams, Keltie Ferris, and my partner Tamara Gonzales. I feel I’m in a dialogue with all kinds of painters, like Mary Heilmann, Sterling Ruby, Richard Prince, Christopher Wool, Bill Jensen… The 1980s painting scene had a big influence on me with Julian Schnabel, Keith Haring, and Jean-Michel Basquiat.

BILL POWERS — Did you know them?
CHRIS MARTIN — I was friendly with Keith Haring. I knew Jean-Michel to talk a little. I remember drop- ping into this SoHo gallery — I think it was called Manhattan Art — where Jean-Michel was down in the basement hanging out on a couch drinking, maybe it was 11 AM. I’m not much of a drinker, but I tried to keep up with him. We were smoking and drink- ing all day and the whole time staring at this huge fantastic drawing of his on the wall, just this masterpiece. He was way ahead of me. He was a sort of miracle.