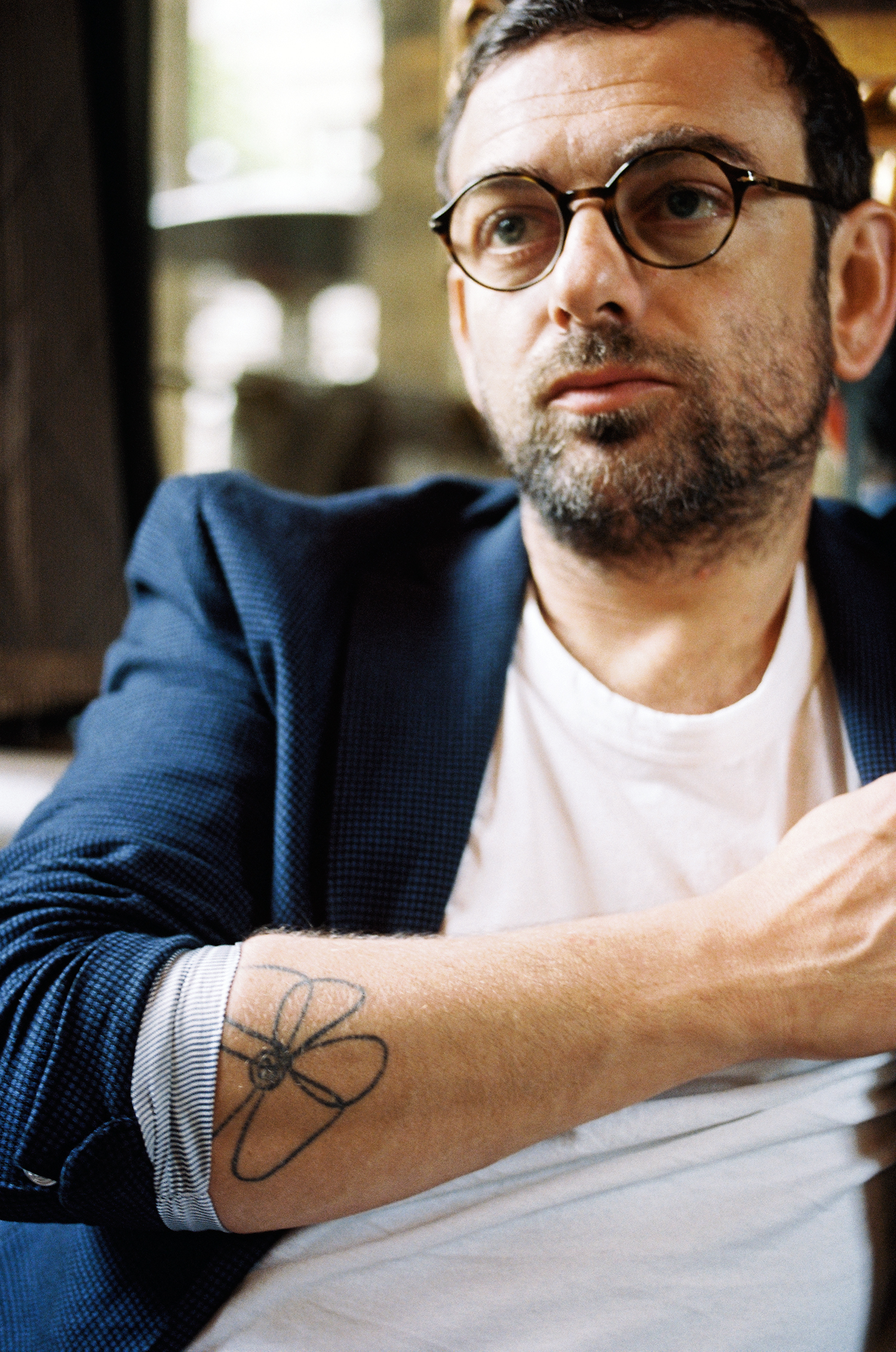 on following your own rules

OLIVIER ZAHM — You now have your own brand and your own boutique on the Rue de Valois in the center of Paris — very chic!
FRANCESCO RUSSO — It’s a dream that’s coming true. It’s freedom, like an empty highway with no traffic. It makes you feel very light.

OLIVIER ZAHM — What was the idea behind opening your own boutique? FRANCESCO RUSSO — The decision was that I’d start with a store that would be more like an atelier, where I could custom-make shoes. For example, tonight I’m going to have a meeting with a customer, and they’re going to order some of the existing models in new materials. So it’s a sort of combi- nation between atelier and boutique. Having my own store was actually the right condition for me to start my own collection, because it allows you to make real your universe and creative ambition. If you don’t have a boutique, you need to go through wholesalers and retailers, and in that case it’s much more difficult.

OLIVIER ZAHM — So it’s a direct dialogue with the woman who wants to wear your shoes?
FRANCESCO RUSSO — It’s exactly that. Today, with my boutique, I’m really interested in getting in touch directly with the woman who wants to wear my shoes; I want to understand who she is. I want to understand step by step what kind of woman I’m reaching, and from that, to develop my collection. I think that in general, the contact between the designer and the consumer has been lost a little bit. 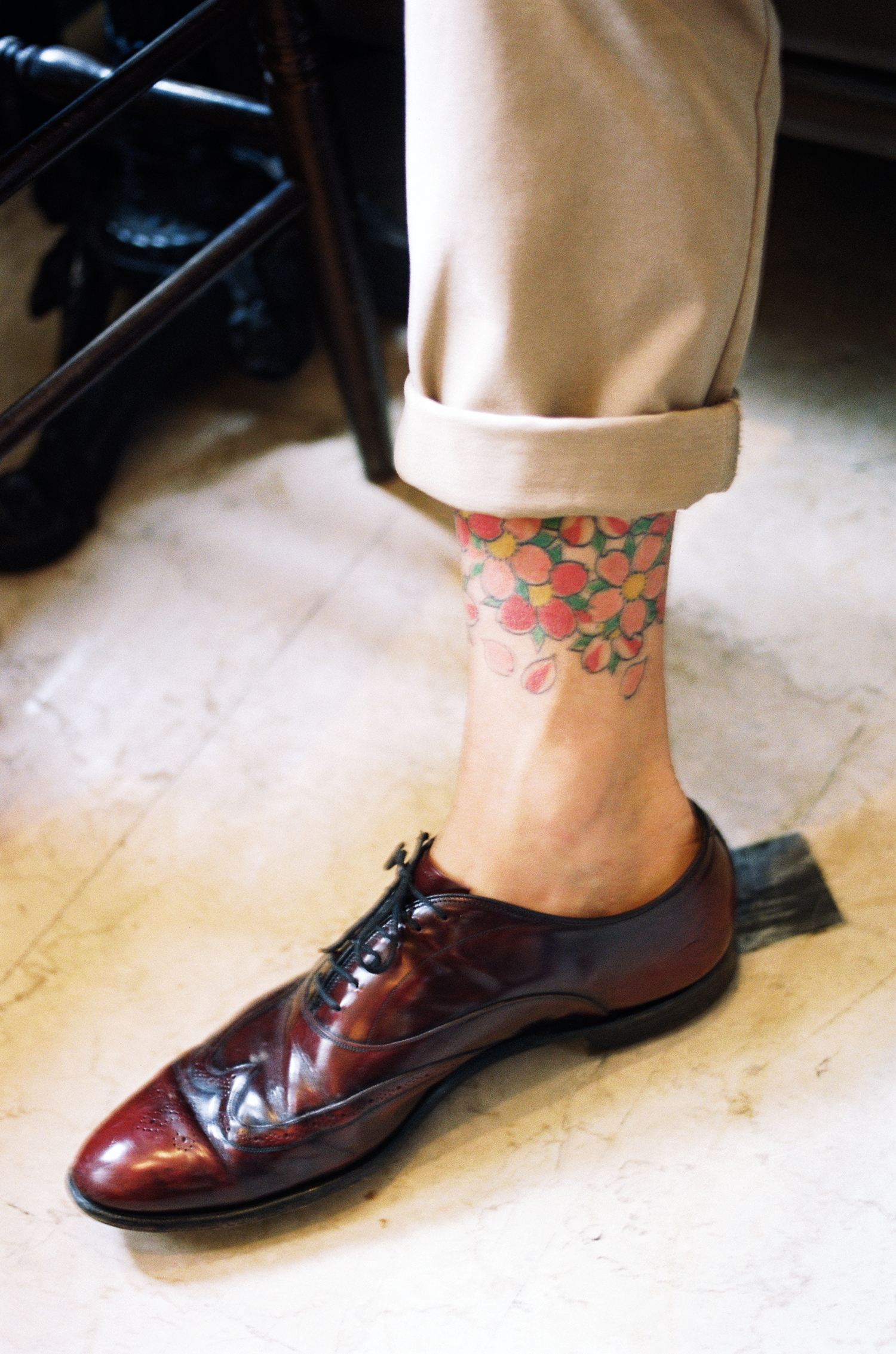 OLIVIER ZAHM — You are not exactly designing a collection each season, but you work from model to model. Is this right?
FRANCESCO RUSSO — Not exactly. My idea is to present new models, season by season, which are not totally disconnected. I am proposing models for winter that you can wear during the winter, so you need boots; in summer I propose sandals. I’d really like to make a collection that is more sustainable, through the seasons, and not just connected with a particular season or trend. So it all grows organically.

OLIVIER ZAHM — From model to model?
FRANCESCO RUSSO — It’s like a book, you know; you have chapter one, chapter two, chapter three, but it is the same book. It’s not something else, like today you read Hermann Hesse and tomorrow you read Joyce, and it’s more like, “I want to read Hermann Hesse.” Then, this book will naturally lead me to another book. I’m trying to approach the collection exactly in this way.

OLIVIER ZAHM — But it’s a way to allow the woman who buys your shoes to wear them longer than one season.
FRANCESCO RUSSO — Absolutely. I take the classics and try to find ways of making them more contemporary. 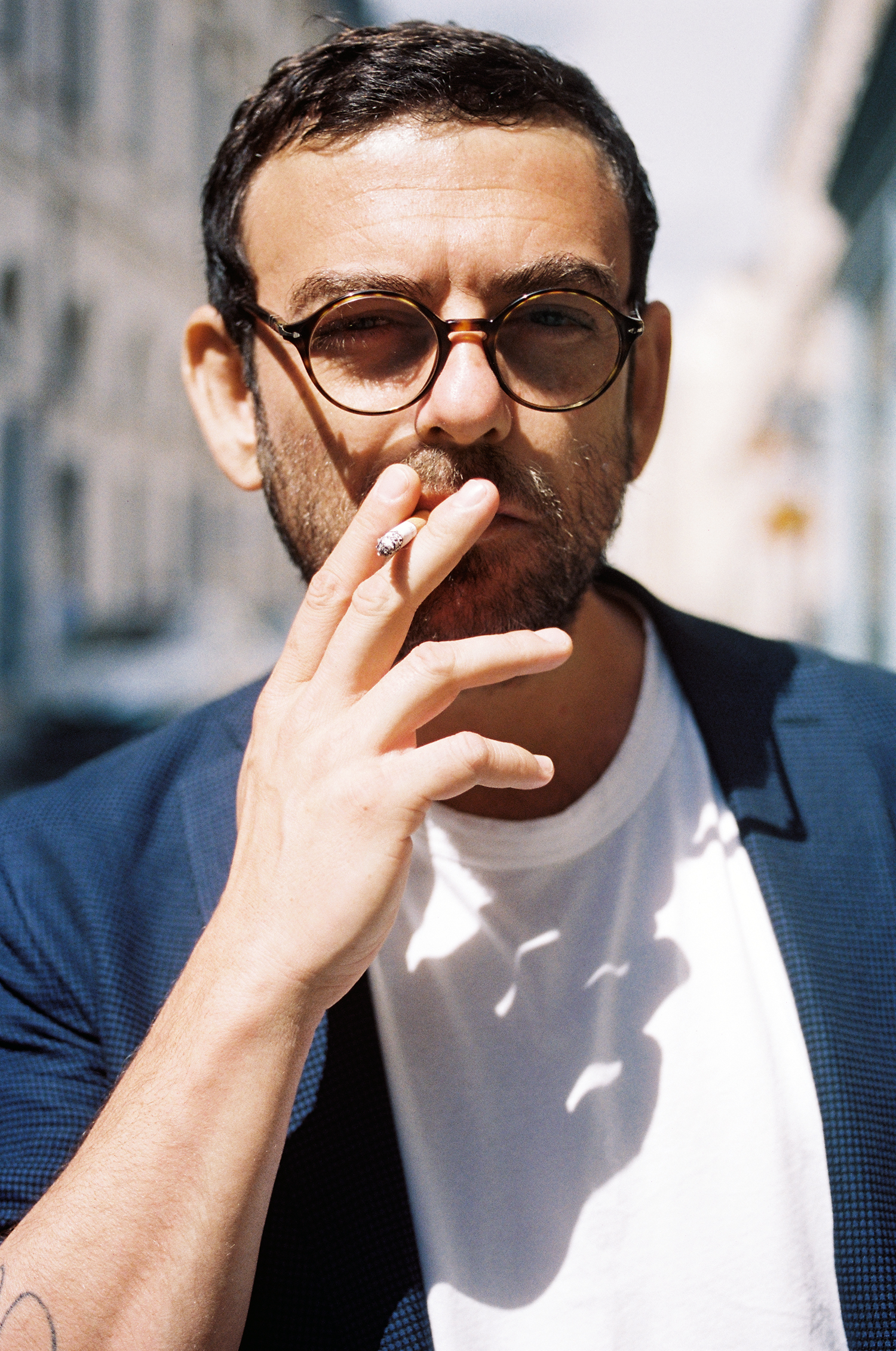 OLIVIER ZAHM — In a way, you succeeded in doing that at Saint Laurent because some of your shoes from YSL are still produced, aren’t they?
FRANCESCO RUSSO — Yeah. The Tribute. It’s like one example of something that comes from the classic design and becomes something very new — and becomes classic again. The Tribute has been one of the best-selling shoes for eight years.

OLIVIER ZAHM — It’s pretty incredible. That’s rare to be able to do that.
FRANCESCO RUSSO — Yeah, but there are many elements that make the shoe successful: the design, the comfort, the fact that it’s got a platform and so the woman, you know, immediately gains 15 cm of height.

OLIVIER ZAHM — But it’s also that the design, which is very classic and still modern, resists trends, doesn’t disappear in one season.
FRANCESCO RUSSO — And I think that’s actually the most interesting thing to do as a designer. It’s quite sad to see something that you do — and you spend like three to six months of your life thinking about and working on — disappear after six months.

OLIVIER ZAHM — So tell me about your creative process. Shoes are connected to architecture in a way, with volumes and lines of forces. You have a very pure line, almost classic in a way. What gives you the impulse to start a new pair of shoes?
FRANCESCO RUSSO — The way I approach a new design is very instinctive, in the sense that I find myself in a specific moment being attracted to a cer- tain line, or a certain kind of shoes. And by following those tracks, which are mainly instinctive, I start drawing and then I start building the shoes, as you said, like a building or a sculpture. So I first work on the last, finding a certain shape. When you work on the form, it’s really like making a sculpture; you start digging out the shape.

OLIVIER ZAHM — So you start with a drawing?
FRANCESCO RUSSO — Yes. But you know, most of the time, the draw- ing gives you the first idea, but then when you’re there it can go some- where else. So maybe it’s a cut that you do, or something around the last that opens other doors in your brain, and what I was saying before: all the information that is stored in your brain makes it almost like an archive. So sometimes you see something, and you recall something you’ve seen, and you’re like, “Oh, I remember that. Maybe I have to try something like this.” So it’s really like a chain, and every process is able to open new doors in your brain. Little by little, you build up your shoes. 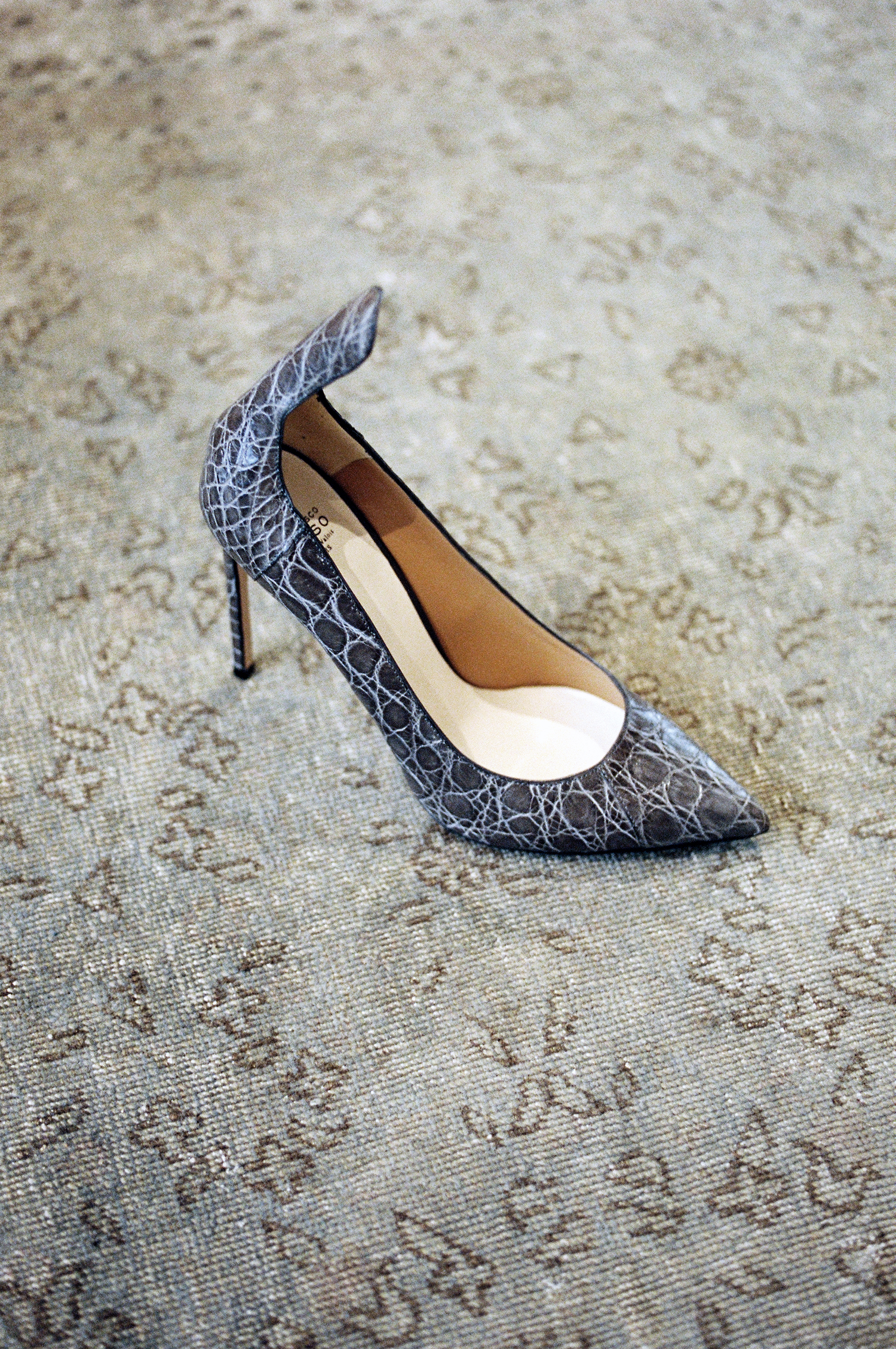 OLIVIER ZAHM — But you’re not too abstract. You always keep something classic and also very sexy.
FRANCESCO RUSSO — Because this is what I like.

OLIVIER ZAHM — You like sexiness.
FRANCESCO RUSSO — I mean, you have to know that I decided to do shoes when I was like six. But before deciding I wanted to do shoes, I decided I wanted to wear shoes. Because watching those women walking with heels, moving in heels — for me, they were the most beautiful thing ever. Since I was a kid, whenever I was alone in my place, I was wearing heels! Why am I fascinated by the sexiness? It’s the shoes that make the woman more feminine. That’s what fascinates me. It’s what makes me, and made me, desire to design this product.

OLIVIER ZAHM — Sexy but without extreme fetishism.
FRANCESCO RUSSO — Never vulgar for sure. But it’s almost at the border of fetishism, I guess. I like to be borderline — sexy but not pornographic, sexy but still classic, still chic. And for me, this is the challenge when I work. I design new shoes, and I search for new lines and new proportions.

OLIVIER ZAHM — Would you agree that your collection is more French in spirit than Italian? It works very well for the Parisian woman, I feel.
FRANCESCO RUSSO — It’s 50/50. Paris for me is home. It’s the city where I grew up, and I’ve been formed here. I lived my childhood in Italy. I lived for six years in Milan, but from 26 up to today, I’ve been in France. My life as an adult has been in France, so obviously I’ve been influenced by the French woman. By the French way of living and even the aesthetic, I guess.

OLIVIER ZAHM — Yes, exactly. So you went straight from Puglia, where you were born, to work in Milan?
FRANCESCO RUSSO — I went to fashion school in Milan for three years and then I started working there. I worked for four years, two years at Costume National and two years at Prada. And then I came to Paris to work with Saint Laurent. 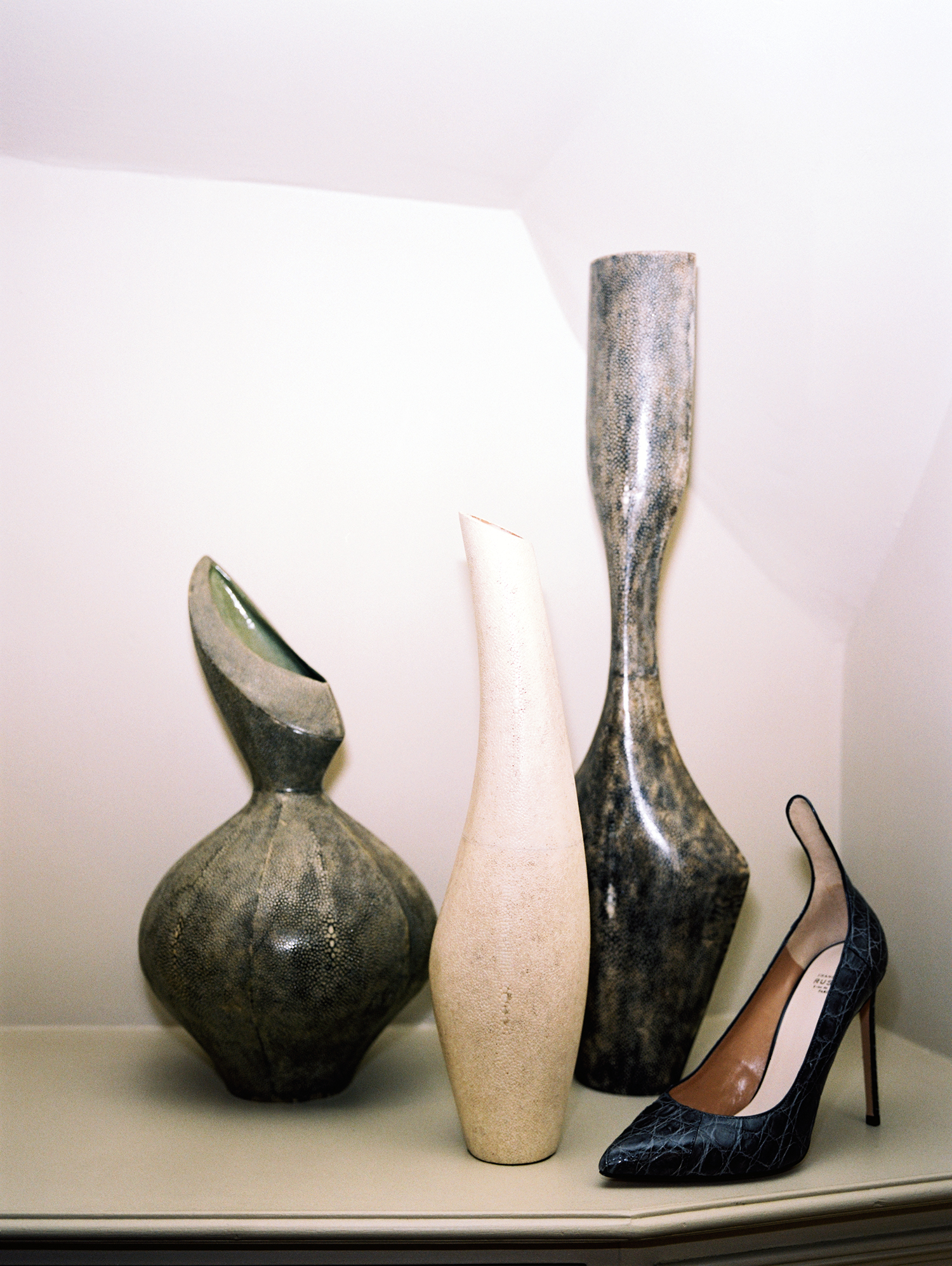 OLIVIER ZAHM — So it’s been a very quick and successful career?
FRANCESCO RUSSO — I’ve been very lucky. I’ve been in the right place at the right moment, and I had people who believed in my work, who immediately gave me big positions. So I’ve been able to really explore my creativity and show what I could do.

OLIVIER ZAHM — Did you have a master or a specific shoe designer who really inspired you when you were younger?
FRANCESCO RUSSO — Of course. There are two, actually: one is Manolo Blahnik, who is my… 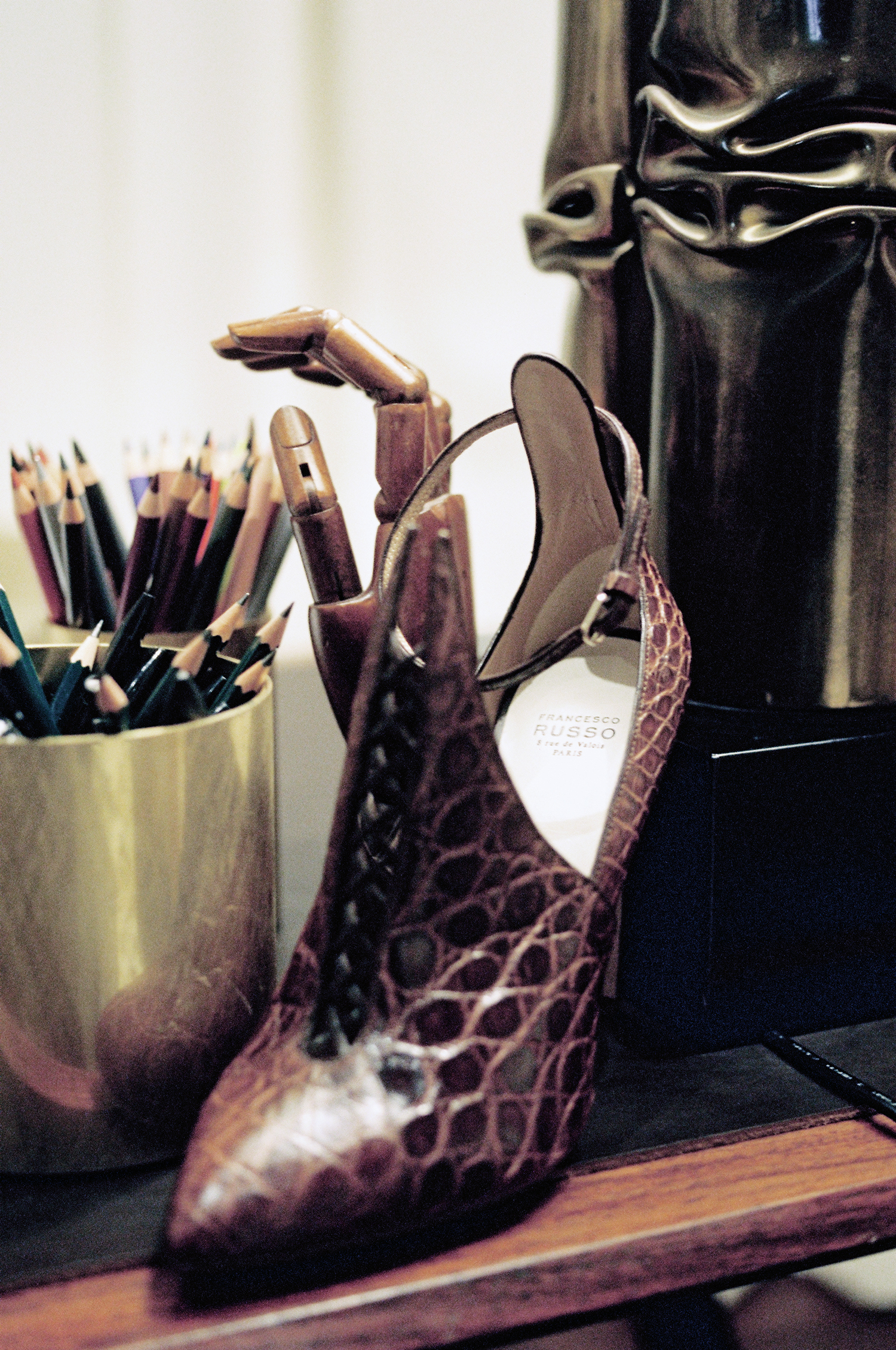 OLIVIER ZAHM — He’s the master.
FRANCESCO RUSSO — Yes, because he’s exactly what I want to be. When I think of Manolo, he has always been Manolo. People were doing plat- forms, Manolo was doing Manolo. People were doing flats, Manolo was doing Manolo. Meaning, he was doing very refined pointed stilettos. So he’s always been very true to himself, and I respect this enormously in his work. The second one is Fabio Zambernardi, who really influenced me a lot in my work and the way of thinking of shoes as a highly creative product.

OLIVIER ZAHM — Yes, the design director from Miu Miu and Prada. What did you get from him?
FRANCESCO RUSSO — Not to be scared of mixing up different elements in the same shoes and always going further in terms of creativity. Not having boundaries and finding the right balance of a shoe, not making it too heavy or too funny. Watching him work — because I was working at Miu Miu with him for three-and-a-half years — was like watching a master class. He was always doing the unexpected. He still does. But it’s always right. He always found the way to make the craziest thing almost normal because with time you get used to it. I mean, when you see the Prada shoes that look like a ’50s car, it’s because Fabio can do that, you know? There was no one else.