Deep in the Lazio region of west-central Italy lies a secret MYTHOLOGICAL PARK dating from the renaissance. The 16th-century stone monsters of BOMARZO resisted nature’s encroachment and were spared the trampling attention of tour guides. They captured the attention of Surrealist artists like Jean cocteau, Salvador Dalí, and andré pieyre de mandiargues, who were impressed by this unique masterpiece of fantasy and melancholy.

During an interview Jorge Luis Borges spoke of his surprise when first writing The Book of Imaginary Beings and paging through a compendium of imaginary animals that seemed fundamentally repetitive and limited. He thought he would be seeing the most Baroque examples of limitless fantasy, but instead saw only a limited circle of extremely similar creatures, common to even the farthest areas of the world. Dragons, mermaids, centaurs, harpies, minotaurs, men with elephant heads — fantasy fauna always seems to come down to the same handful of hybrids, with slight variations, whose shared quality seems to have a symbolic significance from Greece to China.

As for Bomarzo, its dream — or nightmare — of stone is not an excep- tion to the rule, but an exemplary illustration of it, with its cortege of sphinxes, giants, tritons, ogres, and Janus-headed and winged horses, all gathered together on a few acres of Etruscan land between Orte and Viterbo. They are a true display of Borgesian zoology. But Duke Vicino Orsini could never have imagined, when having the pieces in his sacred grove built between 1547 and 1580, that he would not only comply with the ideas of a great 20th-century writer, but also support him by inspiring other variations on the same fantasies. But let’s not get ahead of ourselves. 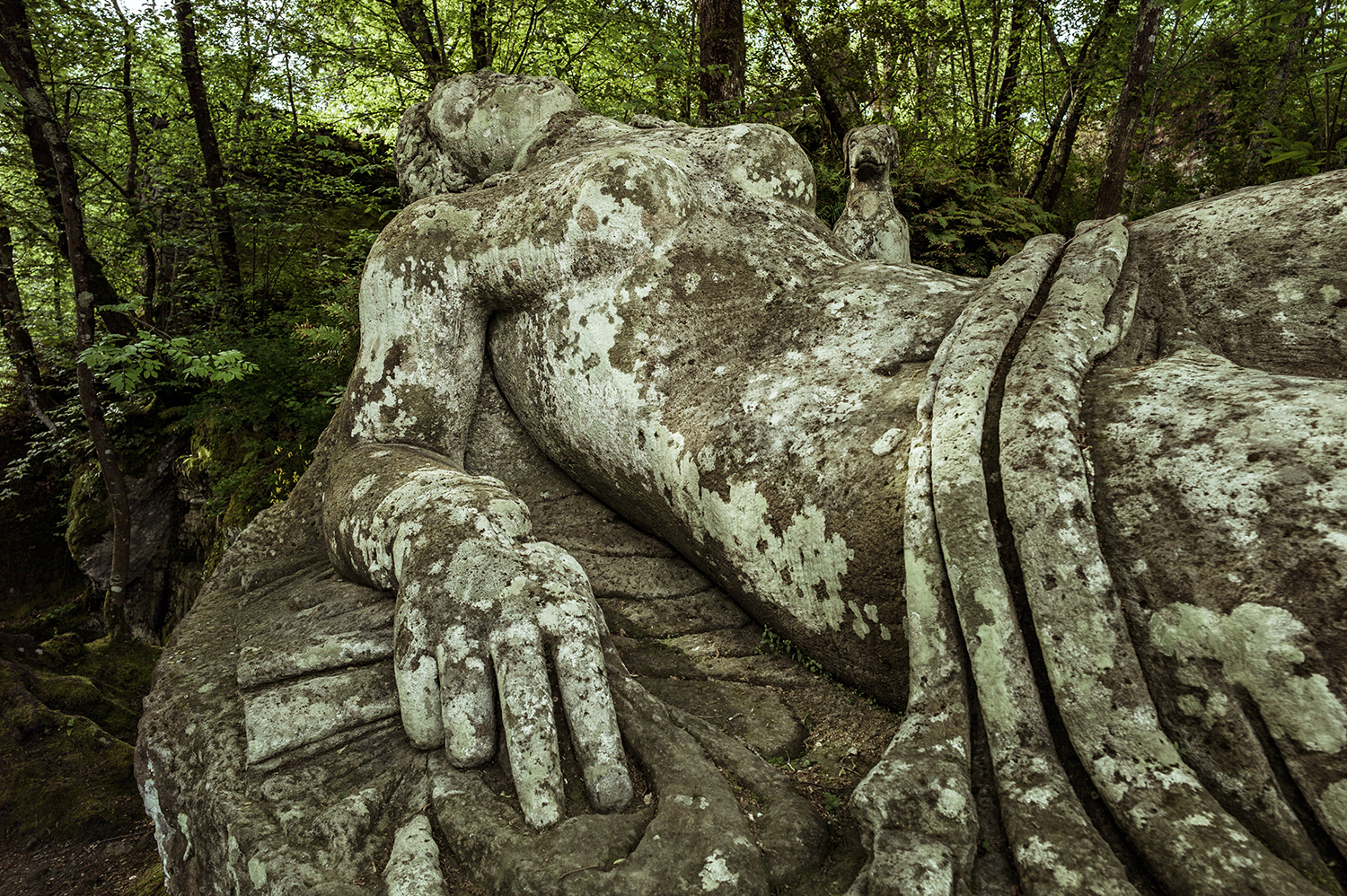 Orsini was born in 1523 and died in 1585. He conceived his park to mitigate somewhat the disappointment he felt after a frustrating military career, as a declaration of an Epicurean credo, as well as a memorial to his late wife, Giulia Farnese, who passed away in Sept- ember 1560.

One of the first monuments to be built in the garden, the Leaning House, celebrates the memory of Guilia perhaps more than the others. It resists the laws of gravity, as Giulia did while dealing with the hard- ships of war. She remained positive in spite of her husband being held in captivity for years.

The same spectral presence can be seen in a succession of vases and urns (now mostly overturned), fake Etruscan tombs, and the monu- mental “Hell Mouth,” which has become the emblematic monument of the grove. (It seems that Vicino began building the first part of his park between 1547 and 1552, then created his cose stravaganti (extrava- gant things) when he returned from captivity, just before Giulia’s death, with a different direction, much darker.) 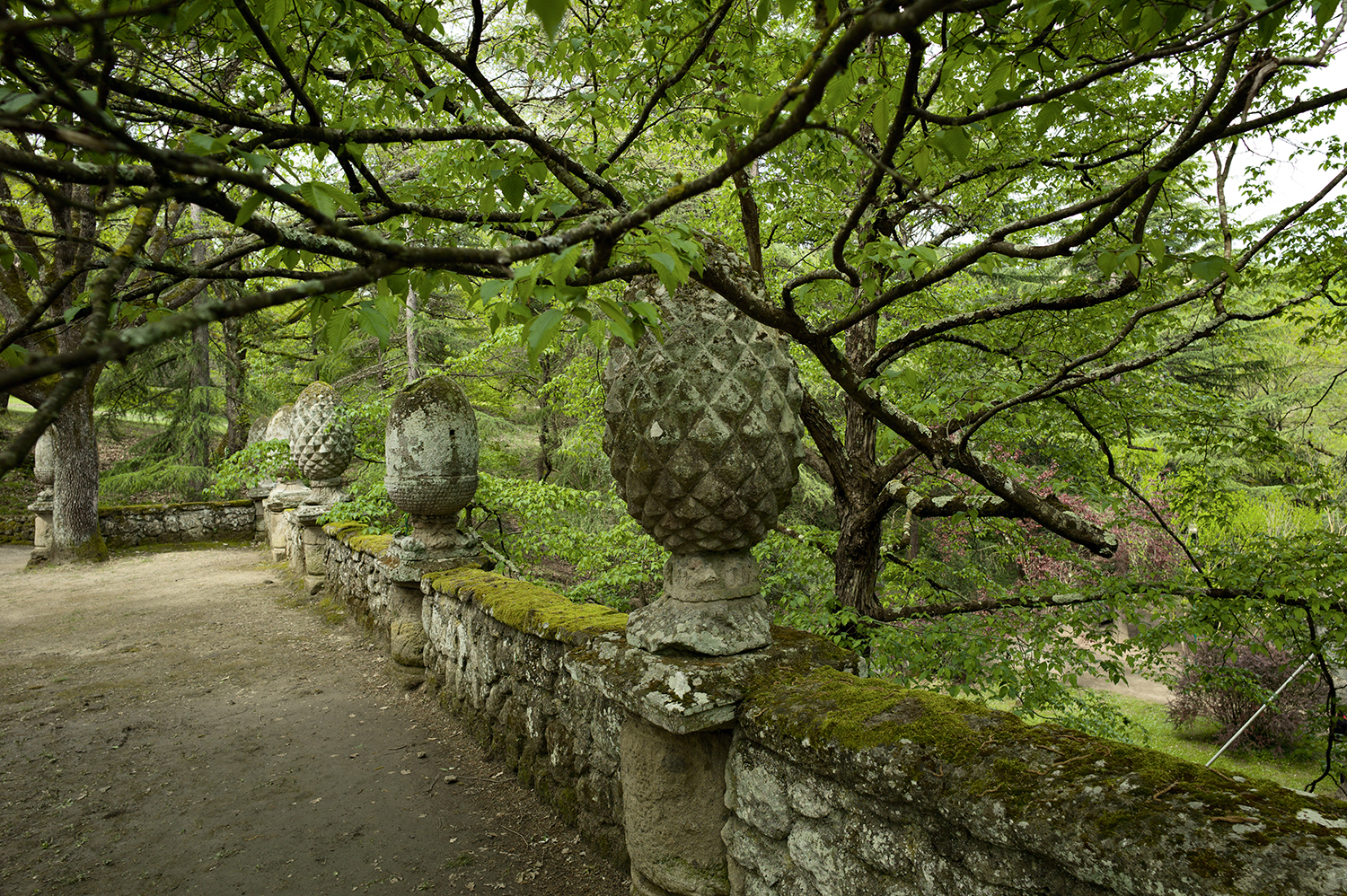 I cannot really expand in this short article on the meanings of the dozens of other figures, some of them built on a colossal scale, surrounding this Orlando Furioso (“furious Roland” in its English trans- lation): Pan, Janus, an orca, a giant tortoise — on top of which sits a statue of Victory — a guard dog, Persephone, a mermaid, a harpie, a dragon, an elephant, nymphs, and Neptune. 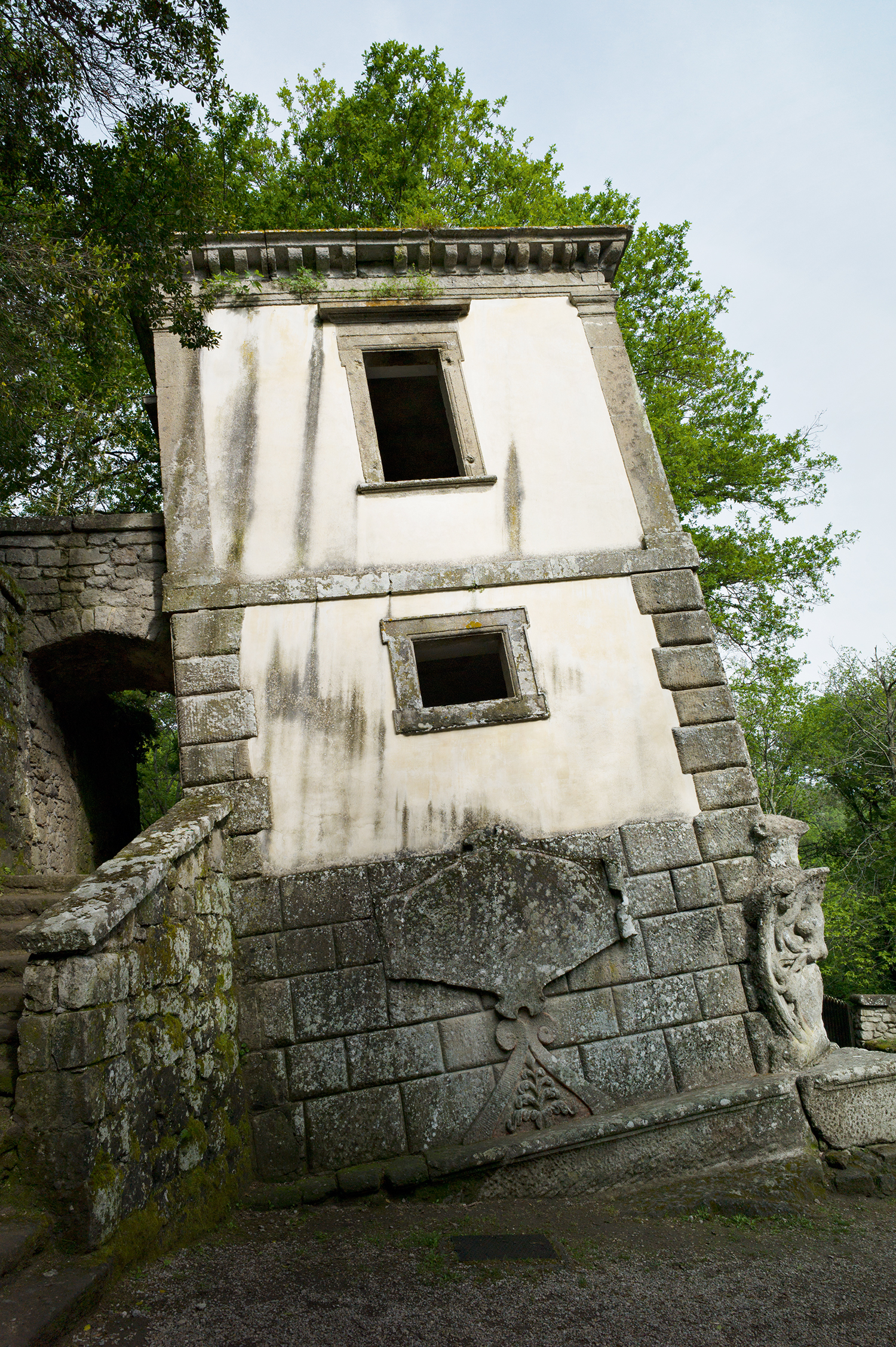 He infused his monstrous creatures with messages, using various kinds of inscriptions, clues, and allusions to a secret but resolute vision of the world. On the lips of the “Hell Mouth” is written:“Ogni Pensiero Vola” [“let go of thought”] not “abandon all hope,” as on a famous verse of Dante. The allusion actually encompasses all the scandalous content that is covertly delivered by these stone creatures: forget every- thing to devote yourself to the only true justification for existence: the pleasure of the senses.

For if the disillusioned Duke chose to withdraw from worldly affairs and the petty squabbles of life at court, in truth it was only to silently proclaim in his enchanted wood his secret Epicurean credo; his rejec- tion of Catholic morals and conventions; his conviction that thought is situated in the body, that the only important things are the search for pleasure and a taste for beauty, and that we must enjoy, completely and scandalously, material things. It is a conviction with a tragic underpin- ning, since the order of human lives is to eventually weaken and die, and this great enjoyment also encompasses an underlying melancholia. A new garden of Epicurus, the enchanted grove of Bomarzo can also be seen as the shadow cast by the body, soon to die, of the Duke him- self, offering a concrete way to forever preserve its vitality and to set out a number of colossal doubles. 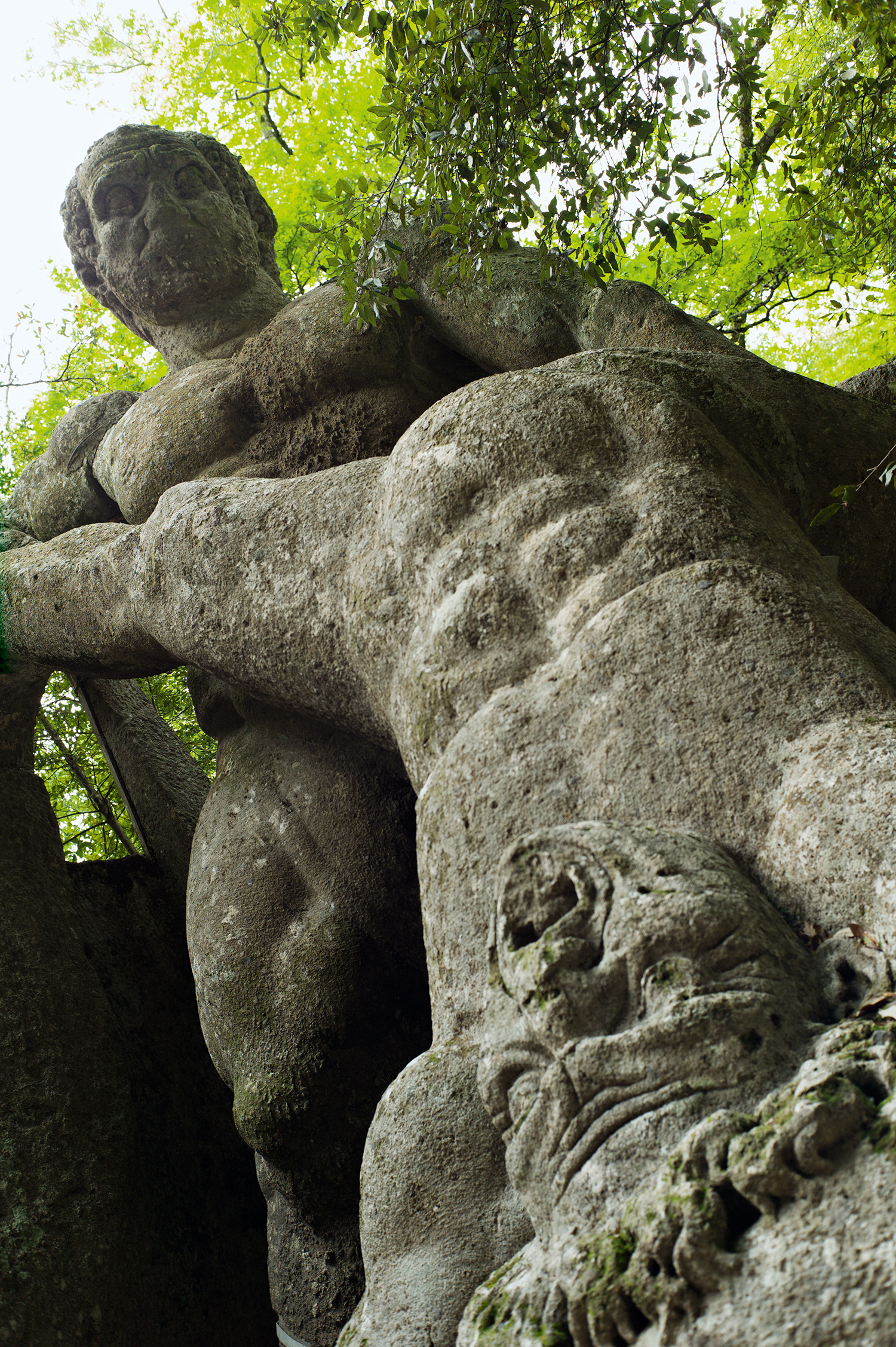 The statues in the park, according to historians, were originally painted in bright, violently contrasting varnished colors. Orsini stated in many letters written toward the end of his life that the idea was to resist as long as possible the ravages of time, to keep things as they were, and to prolong as long as possible what was necessarily a finite energy.

Only faint traces remain now of their bright polychromy. The estate was sold and left to rot after the Duke’s passing — until the middle of the 20th century. The vegetation took over. Some of the great stone giants toppled, urns broke; stone surfaces were covered with moss and lichen; the earth was invaded by brambles and brush, choking the nymphs and goddesses. The forces of nature conquered the sculptures, creeping into even the smallest corners, eroding their shapes, covering them with seasonal colors, reshaping the landscape as its creator had imagined it. 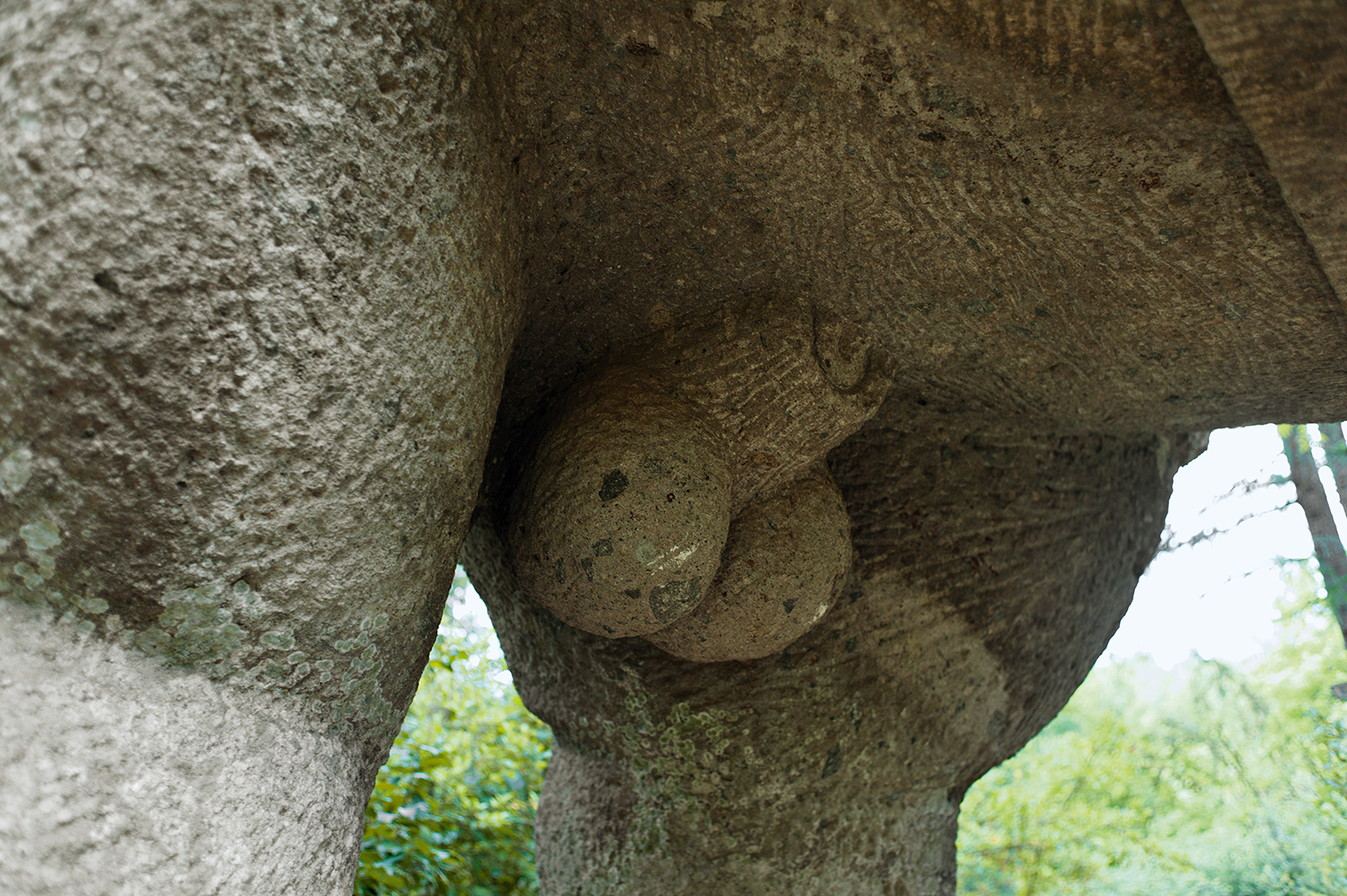 This was a bittersweet victory for Vicino Orsini because the monu- ment, which he had hoped would transcend the fragility of his exis- tence, did just that, surviving centuries of abandon, the damages wrought by time, constant erosion by wind and rain, and the continu- ing germination of the vegetation. Bomarzo also satisfied our own taste — since the end of the 18th century — for ruins and fragments; the distorted landscape stands in our imagination next to those of Aztec and Indian temples, of which there were several pastiches, and which we normally would only admire in sublime ruins and in an obscure jungle.

The estate has also become one of the cornerstones of a bizarre global topography, which includes the Désert of Retz by Monsieur François Racine de Monville, with its concealed structures; the Villa Palagonia in Sicily, with its corteges of stone dwarves; and the forest of turrets and stairways to nowhere, imagined by the whimsical Edward James in Xilitla, Mexico, in the latter half of the 20th century, whose sole objec- tive was to let it be entirely overrun by the jungle [see Las Pozas from Purple Fashion magazine #16]. 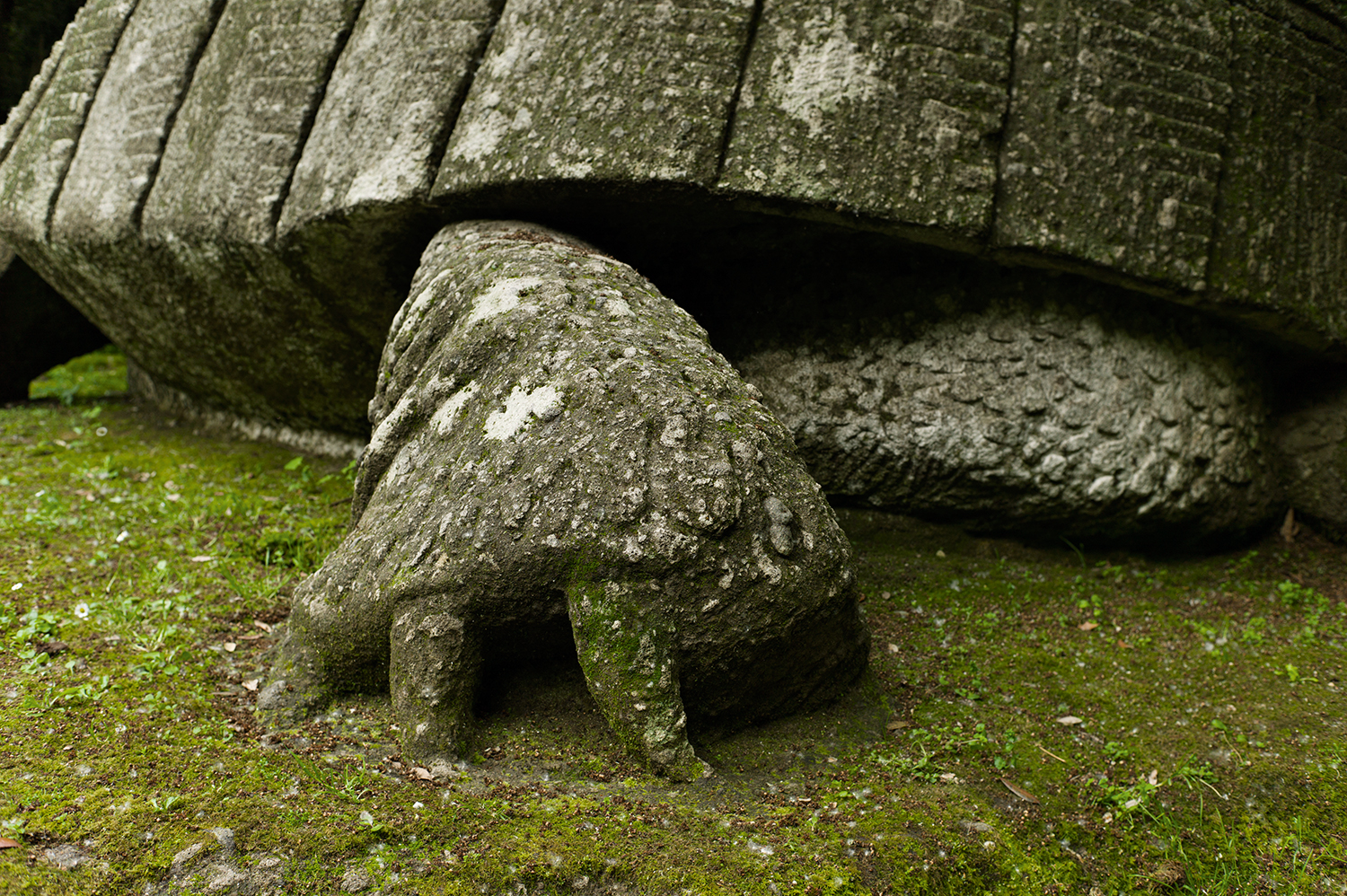 Duke Orsini’s subterfuge with Death only really came to light after World War II, and unsurprisingly one of its first visitors (and the first to write an essay about him, in 1953) was the controversial Mario Praz, an amateur of the weird and the bizarre. He was followed closely by André Pieyre de Mandiargues, as passionate as Praz about Mannerism, and the author, four years later, of a prose poem about the venue, at the time still open to all conjecture, accompanied by magnificent heliogravures presenting a first look at the grove in modern times (Les Monstres de Bomarzo, Paris, 1957).

It took another 30 years before an exhaustive study on the signifi- cance of the grove and the personality of its creator came out. In a never-ending search for precision, its author expanded on it substan- tially for its Italian translation a few years later (Horst Bredekamp, Bomarzo, published by Worms, 1985, and Rome, 1989). In the interven- ing years Vicino Orsini was mentioned again in 1962 in Buenos Aires by the Argentinian novelist Manuel Mujica Láinez, in connection with his masterpiece, the enormous historical fresco Bomarzo, mentioning many details of the monstrous park, for which the Duke himself was the paradoxical, posthumous narrator. This novel is considered one of the most important in contemporary South American literature, which Borges deemed to be a true reinvention of the genre.

The same year that Mandiargues published his book in Paris, the socia- ble and somewhat rebellious architect Tomaso Buzzi purchased, at the outer edge of Umbria, not too far from Bomarzo, an estate of several acres adjoining a 13th-century convent commemorating St. Francis of Assisi. It seems likely that as informed as Buzzi was about everything happening in and being written about in Europe, he would have been aware of Mandiargues’ book and the writings of Mario Praz. His curi- osity and evident culture probably meant that he also was aware of the existence of the “little grove.”

A religious skeptic, Duke Orsini paid no attention to the former con- vent, concentrating completely on his “project,” creating an ideal space out of nothing, a veritable “anthology of stone” featuring the Acropolis and the monuments of Rome, the Villa d’Este and Hadrien’s Villa, Renaissance models of Serlio and Palladio — but also a Pegasus and the boat and “Hell Mouth” of Bomarzo. By spending 30 years building the “agnostic theater” of La Scarzuola [see Purple Fashion magazine #21], and I am fairly sure that Tomaso Buzzi picked up where Vicino Orsini’s dream left off, summoning in his own way the hybrid figures of the same imaginary zoo, even in the limited form as observed by Borges.