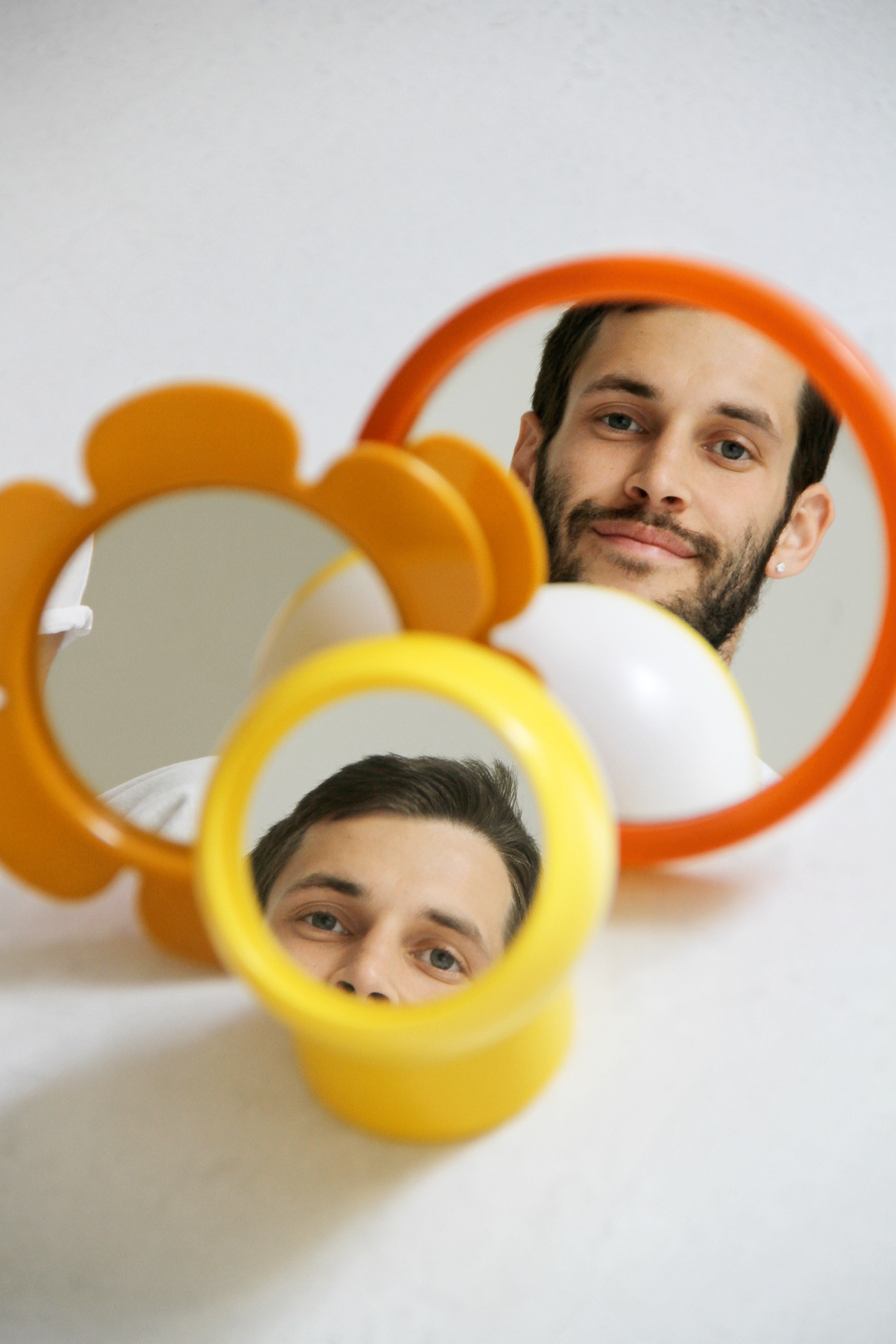 CAROLINE GAIMARI — You just got back from your first trip to New York. What did you think?
SIMON PORTE JACQUEMUS — I’m not a big fan. I prefer France, and Mediterranean people. I was never fasci- nated by or curious about the US. Really, never. I don’t have any kind of “American Dream.” I really love France. I’ve been fascinated by France and French culture since I was a little boy. I think it’s not that popular to be a Francophile. I don’t think there are any other designers that consider France in this way. Of course there is this “blue, white, red” trend, but I’m not focused on the flag; it’s about the spirit of the French girl.

CAROLINE GAIMARI — Are your parents both French?
SIMON PORTE JACQUEMUS — Totally. They are very French. My name is Simon Porte. My dad’s last name is Porte, and my mom’s is Jacquemus. I grew up in a small town called Brame-Jean, which has only 100 habitants, located between Marseille and Avignon. It’s 40 minutes from the sea.

CAROLINE GAIMARI — Did you swim a lot as a kid?
SIMON PORTE JACQUEMUS — Yes, I was always in the sea. My collection is always about blue and white, which comes from the sea, and then I add color. But I would also go in the fields, dress up in costumes. I had the best childhood ever, but it was quite long. I was kind of alone, without a lot of friends. So I felt like I was always just waiting. Waiting for school, waiting for everything.

CAROLINE GAIMARI — Did you know as a child that you wanted to work in fashion?
SIMON PORTE JACQUEMUS — Yes, since I was six or seven years old. I’m not from some sort of fashion family, but it really didn’t come as a surprise to anyone. Everyone from my grandmother’s neighbors to the postman knew I would work in fashion.

CAROLINE GAIMARI — Did you have access to fashion back then?
SIMON PORTE JACQUEMUS — Not really. I had access to creativity through my mother and father. My mother was always decorating, so my house was crazy and beautiful. No fashion, really, except Vogue. My dad sold fruits and vegetables, and was in a band playing rock ‘n’ roll, wearing high heels. Just because you’re a farmer or something doesn’t mean you are stupid and without creativity. 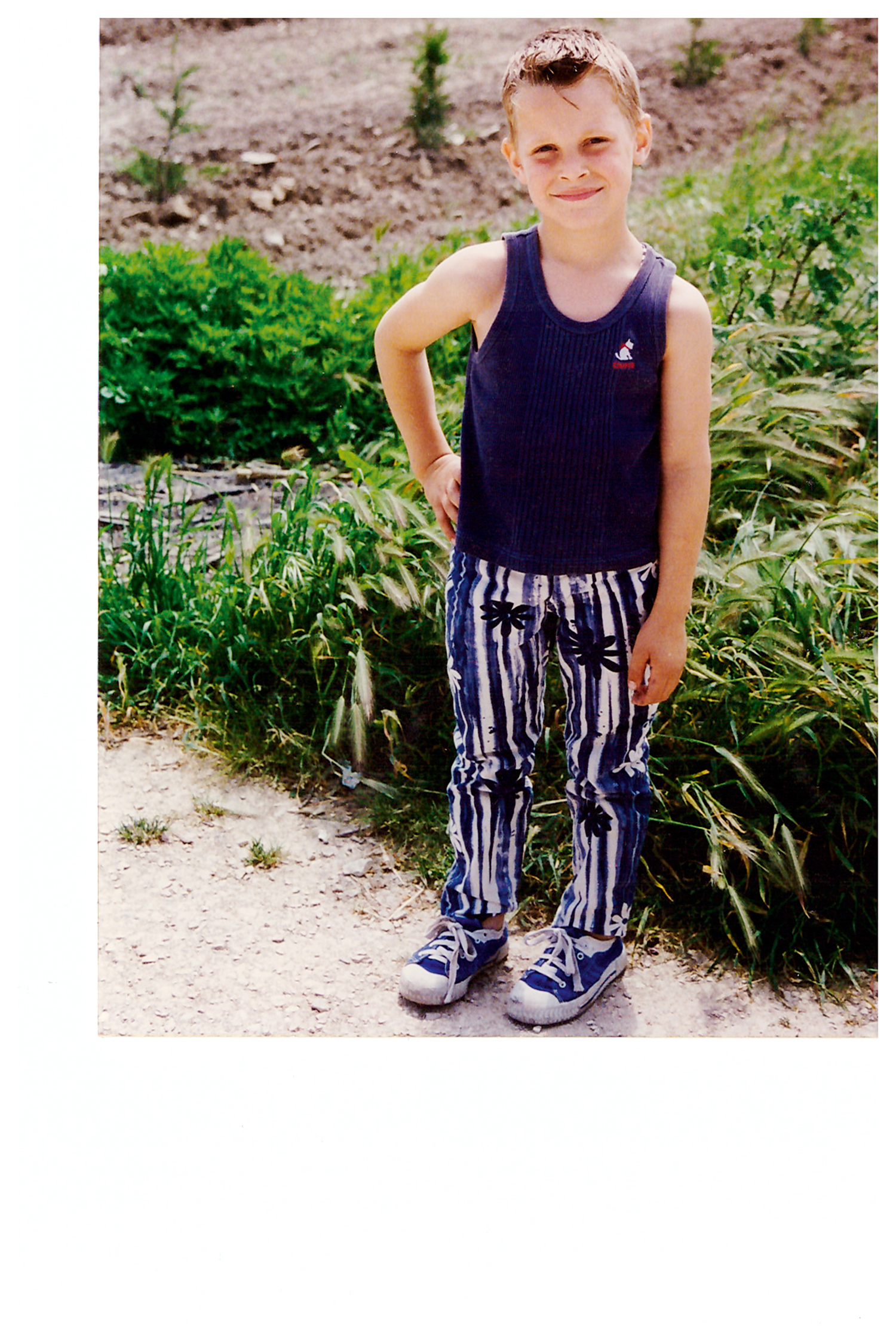 CAROLINE GAIMARI — You moved to Paris after high school?
SIMON PORTE JACQUEMUS — Yes, when I was 18. It was my dream to move to Paris, to go to a fashion school and become a designer. I arrived at the fashion school ESMOD very motivated, and then stopped after two months. I lost my mother a month after that, so I decided to just do my own thing and follow my own dream. To tell you the truth, I was a bit disappointed when I arrived in Paris. It wasn’t crazy people dancing in the street. Paris is just a big city with different people.

CAROLINE GAIMARI — You’re so blasé!
SIMON PORTE JACQUEMUS — No! I’m super happy everyday. I enjoy New York and Paris, but I prefer the South of France. That doesn’t make me blasé!

CAROLINE GAIMARI — Do you like living in Paris?
SIMON PORTE JACQUEMUS — I’m here because I work here. I guess I am blasé! I work here, and I love what I’m doing. I chose Paris because fashion is here. But I’m not in love with Paris. When I was a little boy, someone told me that if I could become known in Paris, I would be known everywhere. And that’s why I’m here, keeping this in mind — that you have to be in Paris for fashion. This is where it happens.

CAROLINE GAIMARI — When did you start at Comme des Garçons?
SIMON PORTE JACQUEMUS — When I started my brand, Rei Kawakubo saw my collection in Tokyo and made a beautiful comment about it. I was like, “Great! Who is that?” I had a sweater from Comme des Garçons, but I didn’t know who Rei Kawakubo was. I Googled her! Then I found out Comme des Garçons was looking for someone for the shop, so I spoke to Adrien Joffe and we got on really well. I started as a sales assistant at the shop at 20.

CAROLINE GAIMARI — Did he help you with your own brand?
SIMON PORTE JACQUEMUS — A lot. Adrien started by giving me advice. He pushed me. They started to sell my collection at all the Dover Street Market stores, and he told everyone around him to have a look at my work. It was really the best help I could have received.

CAROLINE GAIMARI — But you do all of the business side yourself.
SIMON PORTE JACQUEMUS — Yes. But everything happened so fast. It was super-exciting. It was step-by-step, like, “Oh, I can have my own show!” And “Oh, now I have my own showroom.” But in reality, it’s only 10% designing and creation. The rest is the daily stuff, like doing bank transfers and all that. It can’t just be fun. It’s also a job.

CAROLINE GAIMARI — Was it important for you to price your collections inexpensively?
SIMON PORTE JACQUEMUS — It was super-important for me that my friends and young people could have access to my clothes. They aren’t that expensive for a young designer, between €300 and €900. It was part of my strategy to have a good price. When I started, though, it was about being very minimalist because I didn’t have enough money!

CAROLINE GAIMARI — What is the starting point for you when you design a new collection?
SIMON PORTE JACQUEMUS — I write a story with a real character — what she is doing, maybe what she is eating — and then I create the clothes. I can’t just make clothes for clothes’ sake. Narrative is important to me in fashion. Without a story, it’s just clothes. It’s Kiabi! The story of the Fall/Winter collection, for example, is about children’s draw- ings. It’s the first time I wanted to tell the story of the Jacquemus dream: the idea of a girl trying to be a woman, or a woman trying to be a girl — a super- naive character. I like the notion that you could think I’m just six years old, putting patches here and there, with no intellectualization of fashion, just super-spontaneous. Even if it looks like a weird costume, I like it.

CAROLINE GAIMARI — What inspires you visually?
SIMON PORTE JACQUEMUS — I like Memphis, and I am obsessed with the space-age period, like Courrèges and Pierre Cardin — his collections and the architecture of his house in the south of France. Of course, if we are speaking about designers, also the work of Rei Kawakubo. But I don’t really have so many fashion references; I am more inspired by French films from the ’60s and ’80s and French culture from the ’80s, like Serge Gainsbourg and Jacno. I have some children’s books with draw- ings and fashion books. I don’t really like to read, I like pictures.

CAROLINE GAIMARI — Indeed, you have no books here. It’s just completely white. There are the racks you designed, but that’s it.
SIMON PORTE JACQUEMUS — Today, I even consider this messy. All my friends think this space will make me go crazy. I like when it feels clinical, with just some color from the clothes. 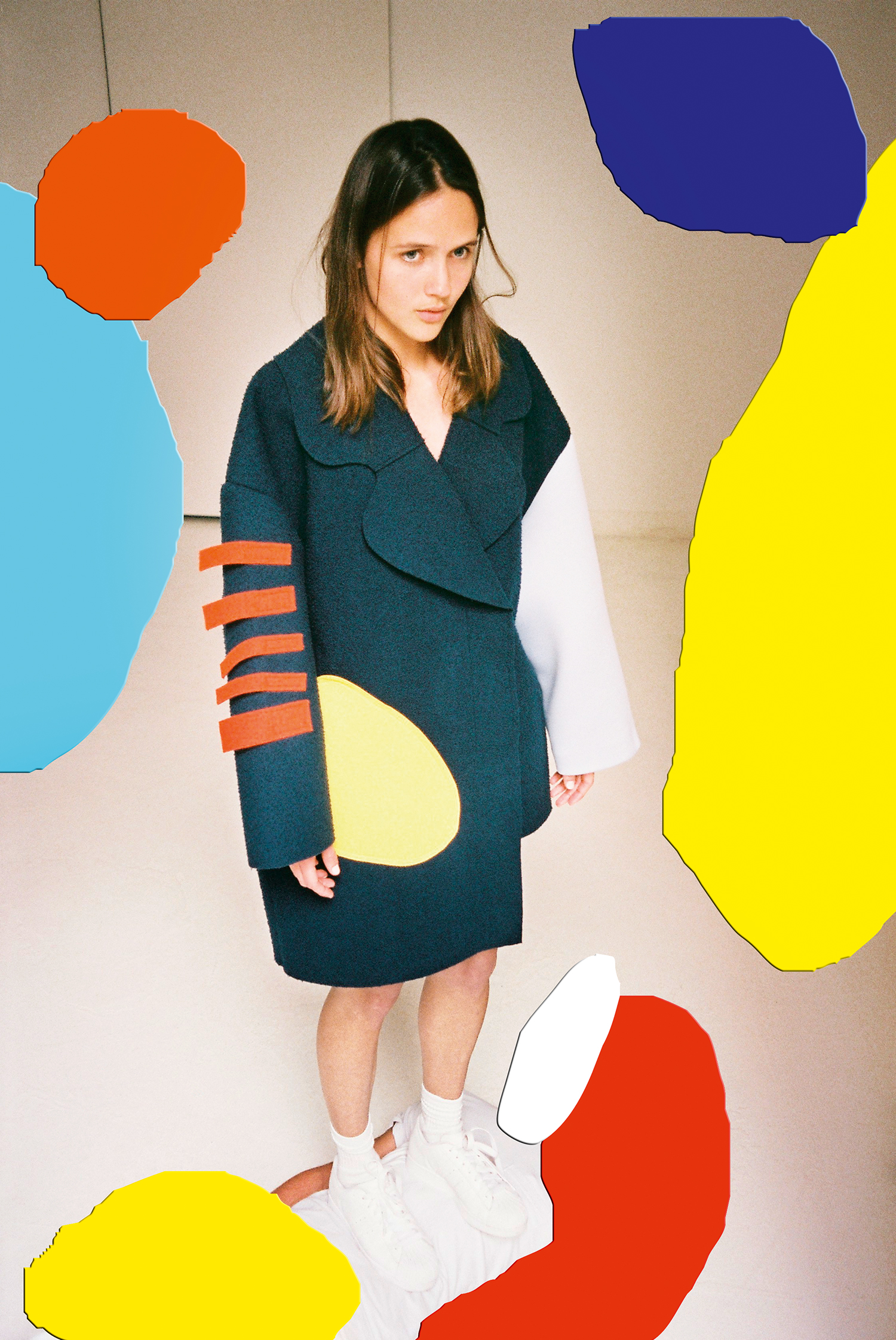 CAROLINE GAIMARI — Now you do two collections a year. Do retailers stress you to do a pre-collection?
SIMON PORTE JACQUEMUS — Yes, everyone does. But I don’t want to. I think there are so many clothes already. I know it’s just a business strategy to have a pre-collection, and it brings the stores more money, but I just don’t want to do it. I want winter and summer, and that’s it. Creatively, and also because of the story. Maybe I will do men’s. I want to try.