interview by CAROLINE GAIMARI
portrait at his apartment by GIASCO BERTOLI 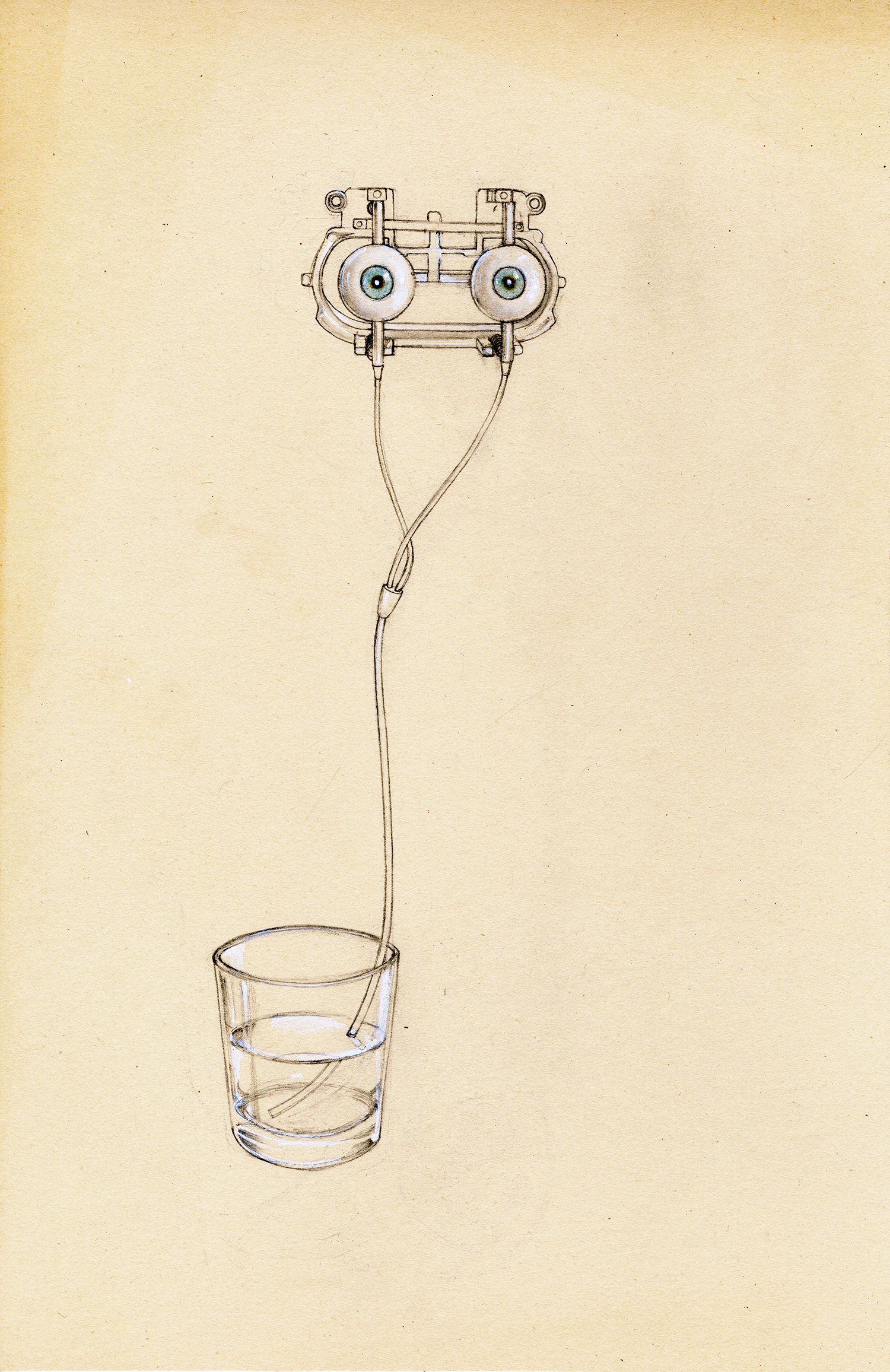 CAROLINE GAIMARI — Your drawings are so precise, almost like a mirror image or a photo.
CÉDRIC RIVRAIN — It’s funny you mention photos because I don’t actually work from one picture. A photo is just so flat when you draw it if you just reproduce one. I work mainly from the 3D idea I have of the person, derived from a compilation of photos that I take myself or find online, of every angle of the face.

CAROLINE GAIMARI — The main focus in your portraits seems to be the eyes, which look so real.
CÉDRIC RIVRAIN — I spend so much time on the emotion in the eyes. I think the secret is there for me; it’s just what brings the soul to your drawing. I try to focus on the eyes and find something in the shadow and the details that will make it sparkle a bit, to make it talk to you in a way. When I draw, it actually feels like I am conversing with the person.

CAROLINE GAIMARI — Why are people sometimes wearing bandages in the portraits?
CÉDRIC RIVRAIN — My father was a doctor, and I was obsessed with all these experimental bandages he would receive from these laboratories in Canada or Germany. They were never really for the face; I just invented the idea in my head. They would have been for under your knee, for example. I started collecting them when I was seven and never stopped. I would fantasize about being able to wear them as accessories or wearing them to look cool at a party. But they were too hard to cut into the perfect shape, so the idea mostly just developed in my head.

CAROLINE GAIMARI — And you integrated them into your portraits.
CÉDRIC RIVRAIN — It started with a portrait of Chloë Sevigny, actually. At the time, I didn’t really do any celebrities, but this one was for a gallery exhibition. I did studies of her face, but it started to feel like fan art, which is fascinating to me nevertheless: the thin line between drawing a real portrait — the art of the portrait — and fan art, or a portrait done in Montmarte or in front of the Centre Pompidou. Some of them are actually really good and catch the emotion in the person. So with this in mind, I knew that when I did my portrait, I had to bring something personal. So I just started put- ting these Mickey and Minnie Mouse bandages on her face, not knowing that she’s actually obsessed with Mickey!

CAROLINE GAIMARI — How do you collaborate with fashion brands?
CÉDRIC RIVRAIN — I work for fashion houses as an illustrator, which is a job that not a lot of houses have. It can be like what I did at Hermès, which was drawing for the inspiration or personal use of the designer to show a certain kind of feeling of the Hermès woman, how she moves and what she does in autumn or at the beach or with snow falling on her. At Dior they have always had this tradition of having an illustrator in-house, and I’ve done it for four seasons. The role is to make drawings for the couture client depicting how she will look in a dress once it’s finished. She basically has to buy the dress based on this drawing because once they start the dress it’s basically already paid for, since it’s made- to-measure. The clients have to be able see themselves in it, and not with a stupid collage of the head on the model’s body. And you have to adapt the original dress to them. For example, some women of a certain age don’t like to show their arms, so the designer has to add sleeves,and the drawing has to show what that will look like. She has to see how the final result will look and not be dis- appointed, so I redraw every little embroidery. It’s all very luxurious.

CAROLINE GAIMARI — Do they get to keep the drawings?
CÉDRIC RIVRAIN — Yes. I remember that there was one woman who was deciding between three dresses, so I had to do three drawings. She loved them so much that she bought all three, based on the drawings!

CAROLINE GAIMARI — Do you get solicited to do portraits?
CÉDRIC RIVRAIN — All the time! But I can’t draw someone who isn’t inspiring to me, even if it pays well. When people ask now, I don’t mind at all just saying, “Sorry, no!” It’s just like when I refuse to draw a bad dress from a brand I don’t care about when I’m doing an editorial. It’s a very private moment when I draw. If it’s something that I can’t connect to, it affects me personally to work on it. It would be like spending days on end locked in a room with someone I don’t like. I can spend entire nights or wake up in the middle of the night and go back to the drawing.

CAROLINE GAIMARI — Is this why you live and work in the same space?
CÉDRIC RIVRAIN — I need to. I need to because I can wake up and have an urge to draw. I can only work by urge and instinct. So if I cannot sleep, I go downstairs and draw what I have in my mind. If I wake up in the middle of the night with the urge, I have to draw immediately. I can’t get in a car to cross Paris in the middle of the night. It’s super-important to me to live where I work because I actually do nothing else with my life. I just need one big open space, because I love to have friends coming over and talking with me while I draw.

CAROLINE GAIMARI — Do your friends ask you to do their portraits?
CÉDRIC RIVRAIN — All the time! They try at least once to ask me, but sometimes it’s not the right moment, so I don’t even hear it. So they ask again another time. I understand why they ask. I have asked all my photographer friends to take a photo of me. The thing is that the drawings take so long to do! I think I would be able to draw all of my friends because they are all so inspiring to me, but it needs to feel like an urge. My friends have to understand I draw them when I want, when I ask them. 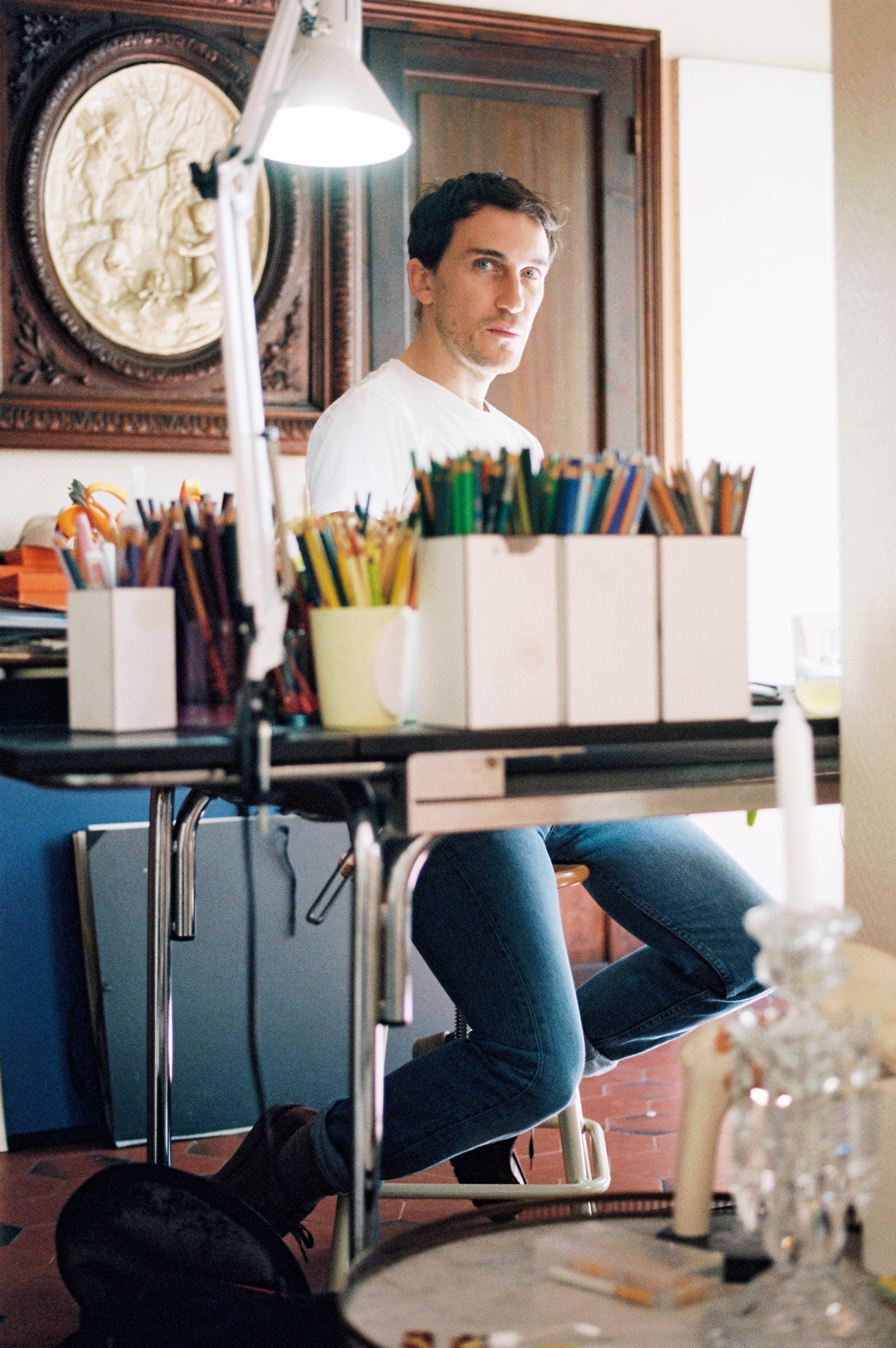 CAROLINE GAIMARI — Do you refuse money jobs?
CÉDRIC RIVRAIN — Oh, yeah. When I do things they have a price. I can only work with brands I believe in, and I keep my work rare for that. I refuse to work with cer- tain clients and can be a snob for years with others. I can be weird like that. For example, now I work with L’Oréal, and I love working with them. They’re very sensitive to drawing, weirdly, which I wouldn’t have sus- pected. For many years I refused to work with any beauty brand because beauty drawing for me was annoying. It reminded me of those plastic face models that make-up artists use. My agent at the time was so annoyed by that because that’s where most of the money comes from. But I just didn’t care.

CAROLINE GAIMARI — But don’t you also sometimes use actual make-up when you draw?
CÉDRIC RIVRAIN — That’s the weird thing! I have been drawing with make-up since I was 12, using my mother’s Chanel products! I love how specific the pigments are, as I almost never work with primary colors. Normally all the paper I use is like washed colors, such as lilac, vert d’eaux, or gray-green. And in make-up you find those pig- ments, and they stay.

CAROLINE GAIMARI — Do you ever draw men?
CÉDRIC RIVRAIN — Not that many. [Points to a drawing] I made this guy up in my mind. I wanted to do a naked, redheaded man. Most people that pose for me are women, and I’m lucky that so many of the women I’m close to and have drawn have given their intimacy to me and posed nude. But with guys, my reaction is just not the same. It creates a very sexual tension that I feared would affect the work. Some artists are driven by a sexual energy, and that’s great, but it doesn’t work for me. It seems like it would be too weird to have a guy I know naked in front of me. I studied doing nudes when I was 18 with guys posing for us, and I learned how to go through the process and not be too affected by what you have in front of you. But really the more I draw now, the more I am affected by what I draw. I’m totally developing the opposite of what I should do, which is just be an expert in impos- ing my technical skill. But I work so much on the emotion in my portraits. I have decided to draw men for fashion drawings as a test. There is no sexual attraction for me toward these models because they are just doing their job wearing clothes.

CAROLINE GAIMARI — Do you draw yourself?
CÉDRIC RIVRAIN — I have done some self-portraits, but they are almost like an avatar of myself. I made a book after a bad breakup. There are my eyes on these crying robots, which were doing the work for me because I didn’t want to cry all the time! I also did self-portraits with blood coming out of my nose. Every time I post them some- where, it’s crazy the attention they get.