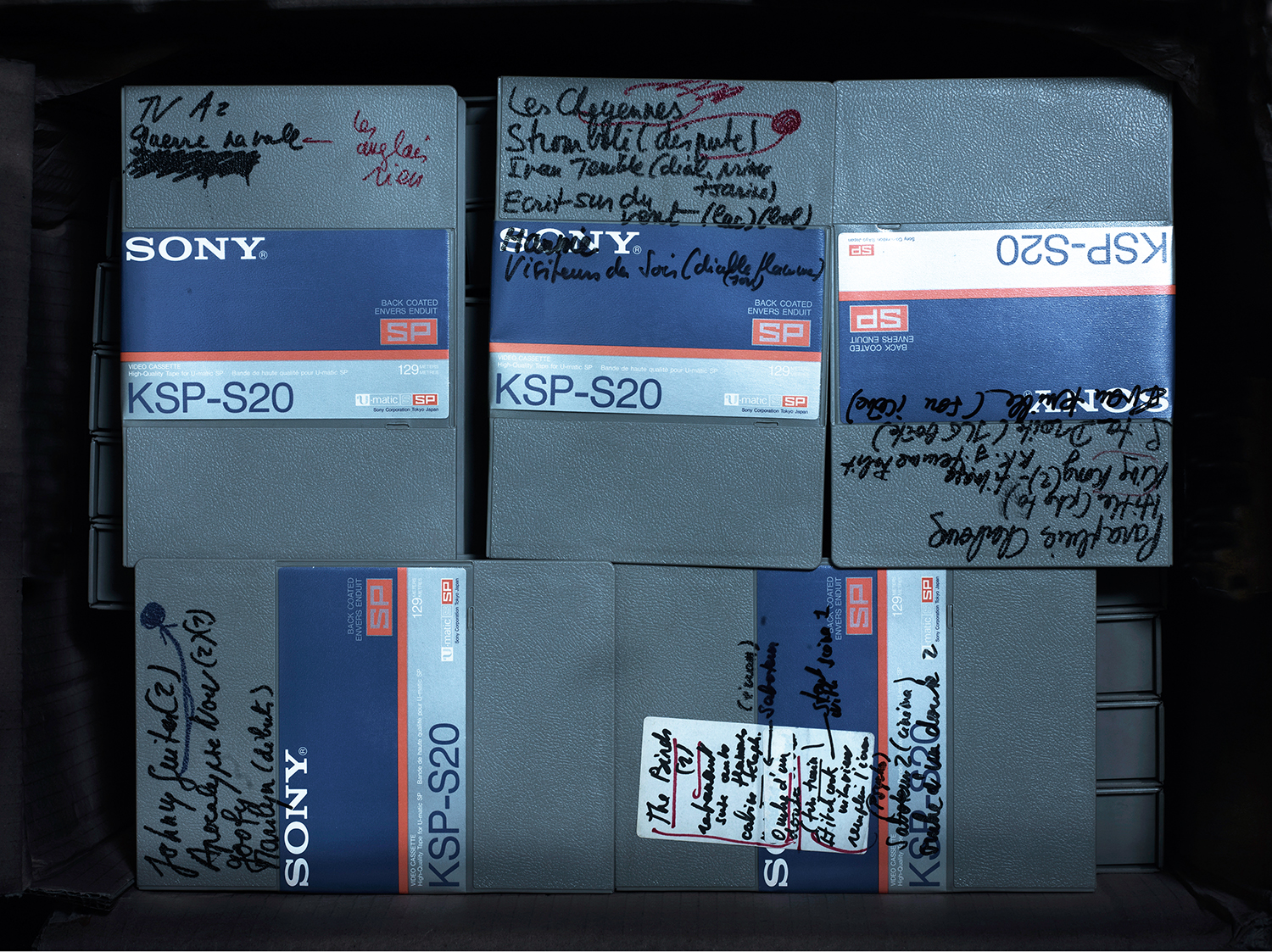 interview and photography by STEPHAN CRASNEANSCKI

STEPHAN CRASNEANSCKI — Our last trip together was from Rolle, Switzerland, where you and Jean-Luc Godard live, to somewhere in the Cantal region in the middle of France, where all of Godard’s archives are located, hundreds and hundreds of piled-up boxes.
FRANÇOIS MUSY — When you get here, you say to your- self: “In this exact location is everything that was in Jean-Luc’s workshop, all stacked up in the middle of nowhere, France.” It’s quite strange. And you feel that it’s good that it is here because it could all have just disappeared. But should they make it a museum? I don’t know. A museum with little signs and stuff? I’m not sure it would be very interesting. 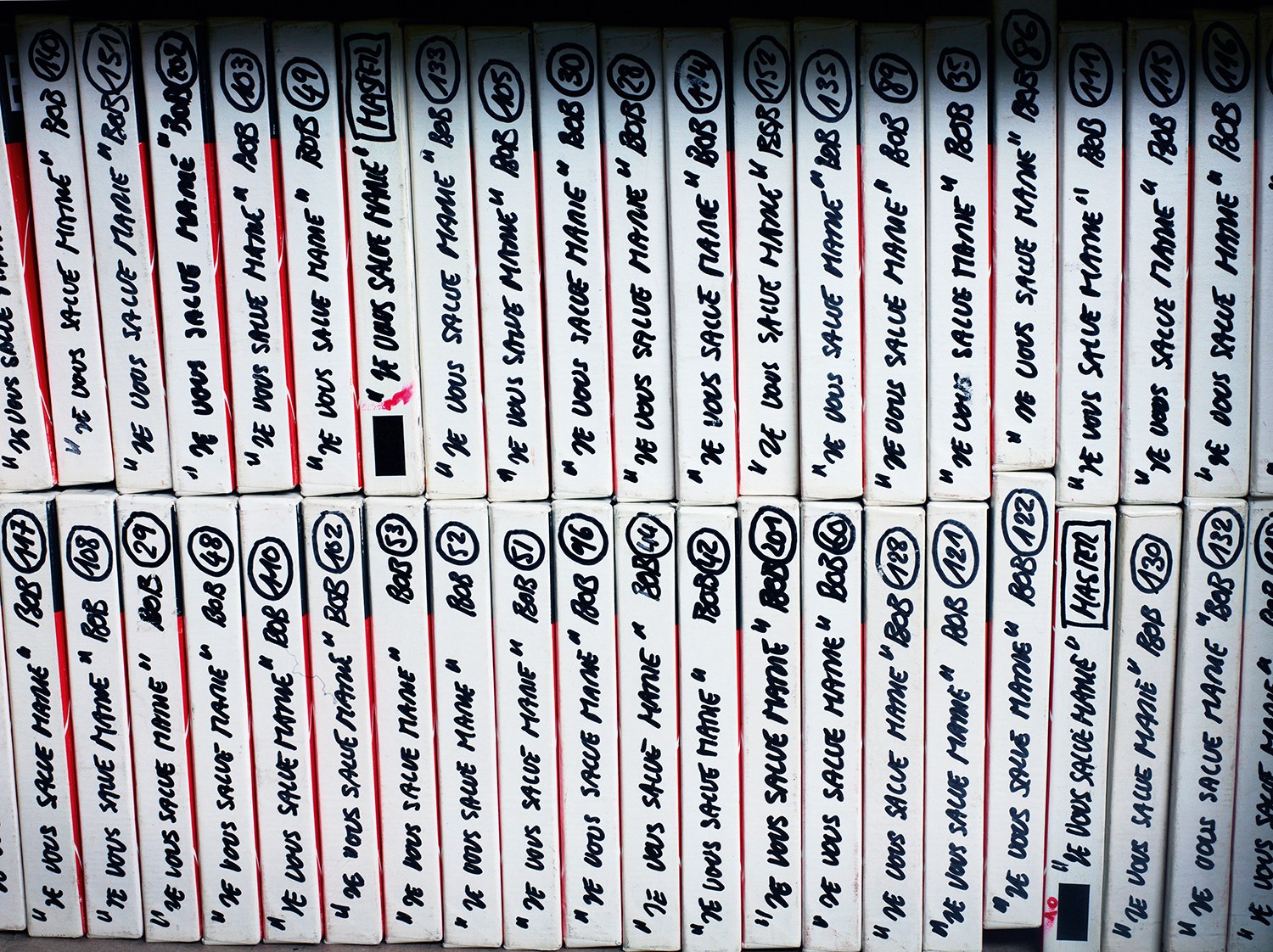 STEPHAN CRASNEANSCKI — I remember walking along this line of boxes looking for tapes. A part of your life is in those boxes. Your collaboration with JLG began on Passion in the early ’80s.
FRANÇOIS MUSY — Right, and in this warehouse in the Cantal are almost all of Jean-Luc’s reels of live sound recorded since 1981; that’s more than 30 films … remember we even found his last editing table.

STEPHAN CRASNEANSCKI — Yes, that editing table and the studio you built together.
FRANÇOIS MUSY — I think that Jean-Luc wanted to be able to get rid of the technicians, the people who were working instead of him, and he also wanted a tool that would allow him to control the editing process from beginning to end. He was especially focused on the idea of his next project, L’Histoire du Cinéma, which he did over several years, at his own rhythm, whenever he liked, during the day or at night, without having to deal with an infrastructure that didn’t belong to him. He wanted to be as free to create as a painter in his atelier. He had a whole workshop to do his edit- ing, and yes, it began with Passion, when he wanted to do the 35mm transfer, to edit his sounds, to choose them without having to go through a lab. 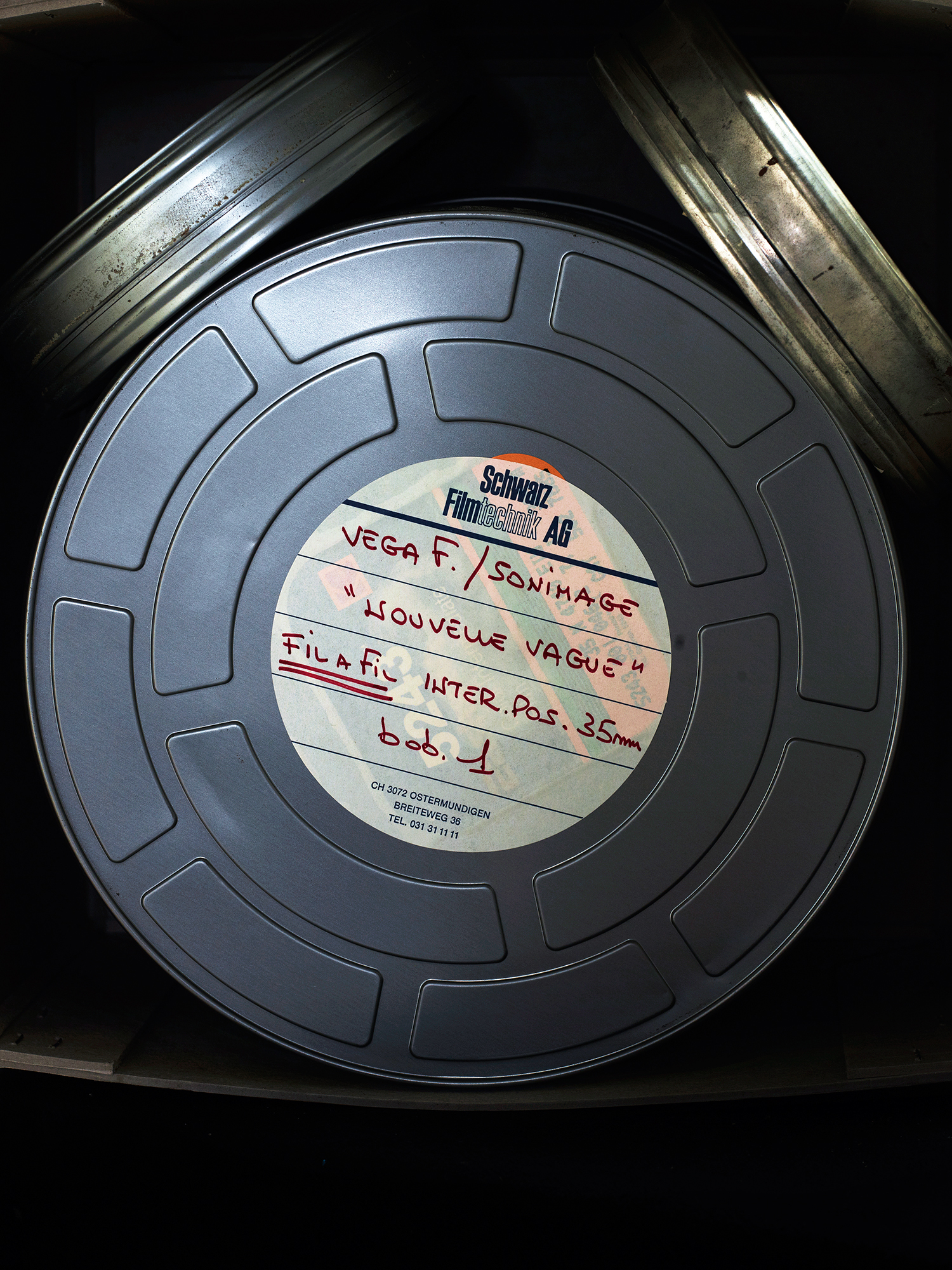 STEPHAN CRASNEANSCKI — There are boxes filled with sounds, words, chaos, and also silence.
FRANÇOIS MUSY — What was interesting with him was asking how to create this organized chaos.

STEPHAN CRASNEANSCKI — Yes, it’s striking — for him sound is also a musical composition.
FRANÇOIS MUSY — Yes, because it’s more musical than acoustic, classical writing; it’s re-composition and reconstruction of an existing acoustic plan. There is no naturalism, shall we say. The sound creates narration or fiction, but it is not just a frame you look at accompanied by realistic sound; it is always transcended by something that will advance the story.

STEPHAN CRASNEANSCKI — The sound of wind rippling through the leaves, a far-off airplane covering a voice, a ringing telephone, a slamming door… each sound has its own value, its own color.
FRANÇOIS MUSY — Yes, the idea is to dare to do stuff that is a priori anti-conformist. That means that sometimes when the phone rings or we hear a bird cry, all the other sounds just stop. It’s daring to do stuff like that, or cutting off the music in the middle of the movement, because it has more of an effect that way than finishing it.

STEPHAN CRASNEANSCKI — When I opened the boxes and began listening to the tapes, hearing your voice as well as that of JLG between takes, it was like little bits of life in a cemetery; we don’t appreciate the suggestive power, the weight of sound.
FRANÇOIS MUSY — Yes, I think we are more attached to the sounds that marked our childhoods, and also to the smells. All the senses evoke memories. Sound because it is alive, it’s a moment of reality that you captured on a tape. A photo is a frozen moment, a photo is more death-oriented than a soundtrack. In a photo you’ve immortalized a moment so you may be forever sure that you have not lost it. But sound is more alive. 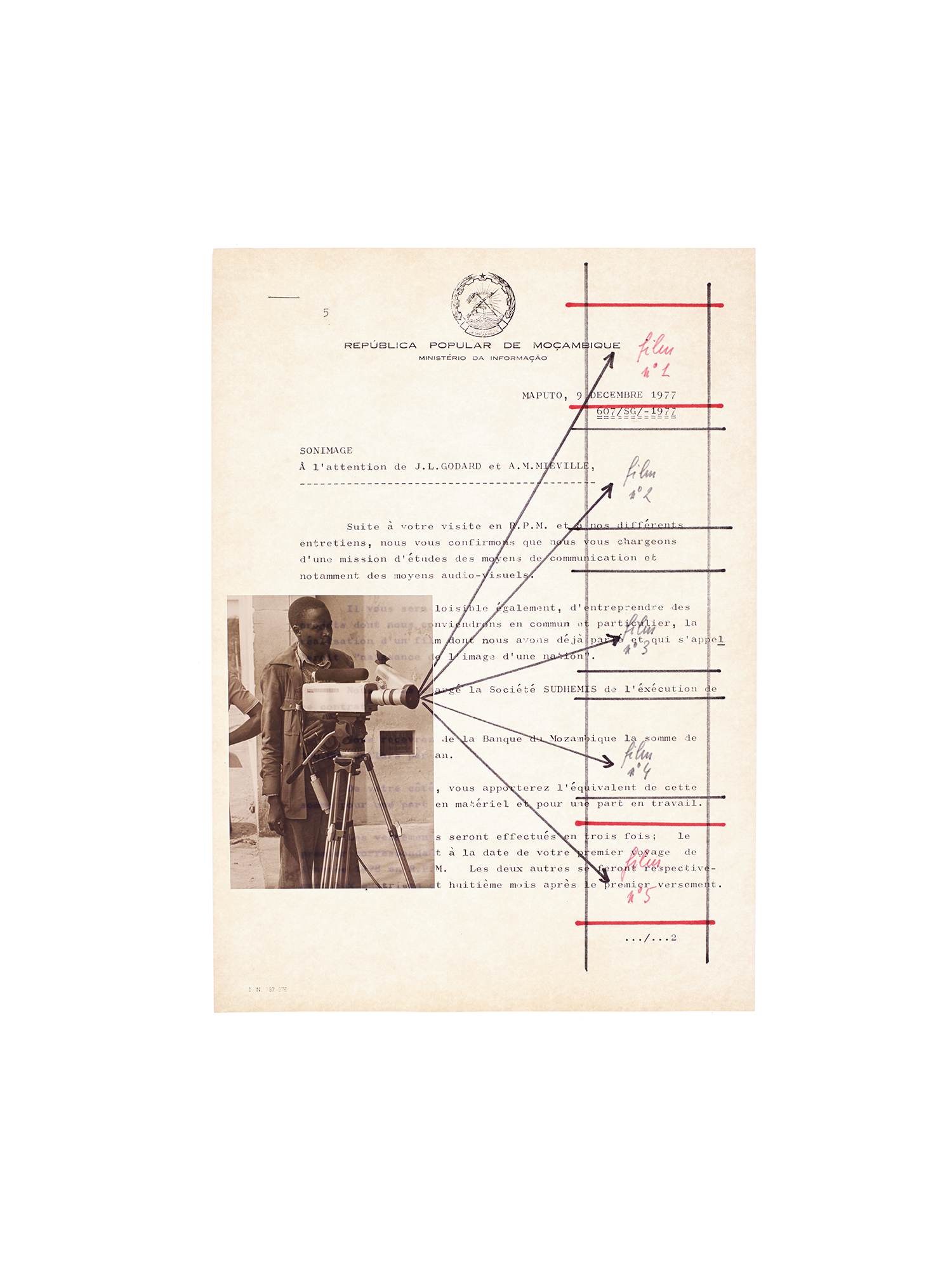 STEPHAN CRASNEANSCKI — In the end, no one hears sound the same way.
FRANÇOIS MUSY — Yes, I think that hearing is more subjective than seeing. You can find a way to agree on a shade of red, but when you’re dealing with sound, there are such latitudes of comprehension and analysis. In addition, sound is different on any day for any person. A sound you hear in the morning will not be heard the same way in the evening because you’re tired, because you’re in a different mood. Sounds which can seem aggressive in the morning can seem normal at the end of the day.

STEPHAN CRASNEANSCKI — I find that interesting that you say we can agree on a shade of red, but it’s more difficult with a sound. And you have to be able to describe the sound.
FRANÇOIS MUSY — Yes, you really have to listen to it. It has to do with perception. When you are very tired, you can’t stand a sound that is very loud. We must not forget that the ear is the only organ with which our system regenerates itself. The rest is intellectual. We like thinking about the sense of smell because some smells are pleasing, whereas acoustic perception is part of balance, part of our energy resources.

STEPHAN CRASNEANSCKI — What do you mean by energy resources?
FRANÇOIS MUSY — Well, if you were to remove birds from the planet, I think mankind would disappear in less than 50 years because the frequencies the birds use are those we use to replenish our own energy resources. Major scientists have studied that. For example, the intrauterine perception of the fetus is filtered so that the sounds the baby hears are only those which will replenish its energy. Everything else is filtered, all the nasty sounds. 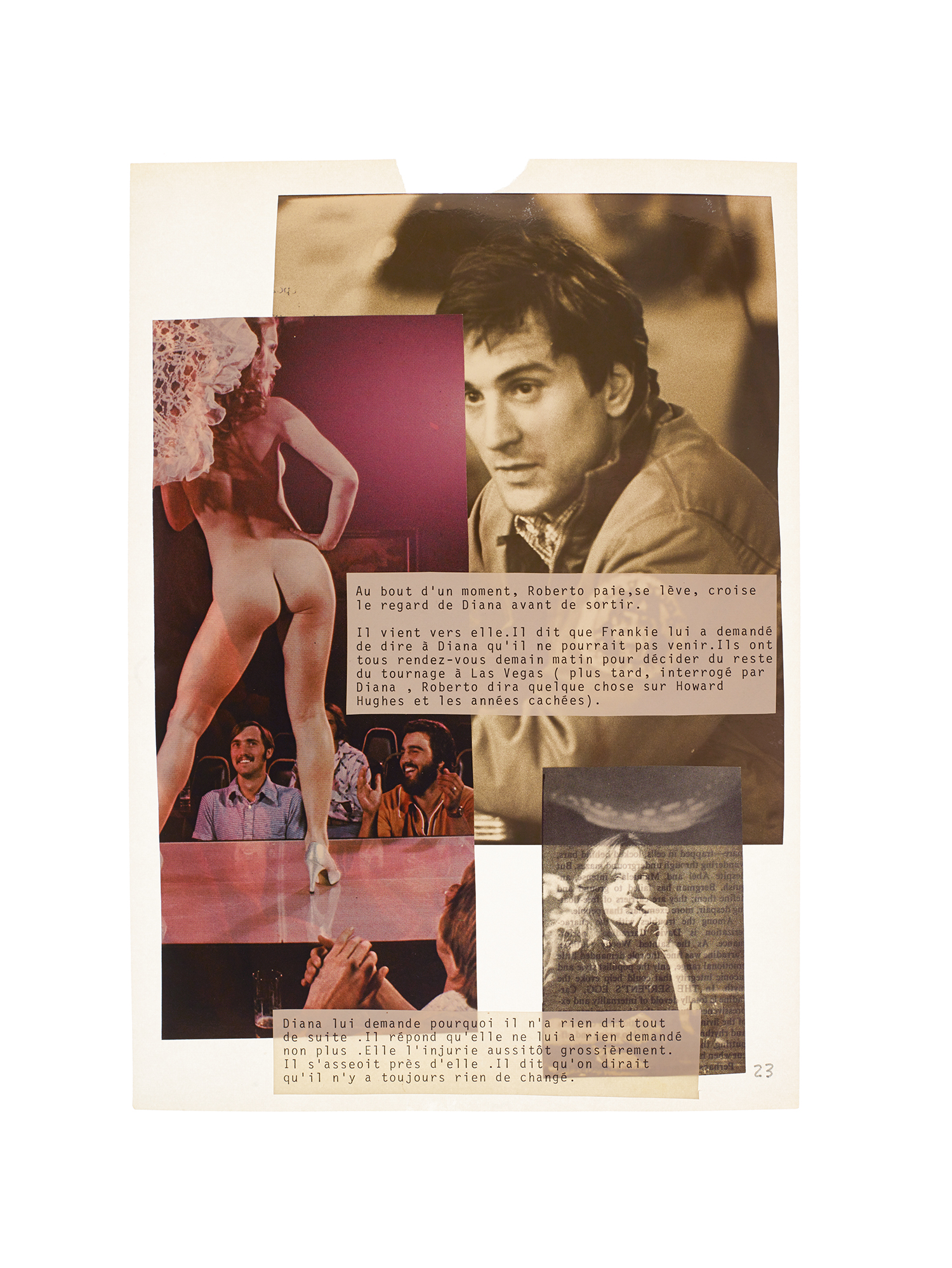 STEPHAN CRASNEANSCKI — An entire day spent listening to birds would be so great.
FRANÇOIS MUSY — So you just kind of ignore all the annoying sounds. What is fantastic is that our brains can filter out annoying sounds, which a microphone can’t do. I am telling you, it’s intellectual. You can’t record it, you can only approach it intellectually, saying, “I heard this, this, and this, and filtered out the other sounds.” And if you want to reproduce that, you have to construct it differently because a micro- phone is stupid, it doesn’t have a brain, so it records everything. A mic is perfect from a technical point of view, for recording whatever you like — but unfortunately, since it doesn’t have a brain, it doesn’t analyze anything — it picks up everything that is around it. For a mic, everything is noise. Victor Hugo said, “All noise which is listened to for a long time becomes a voice.”