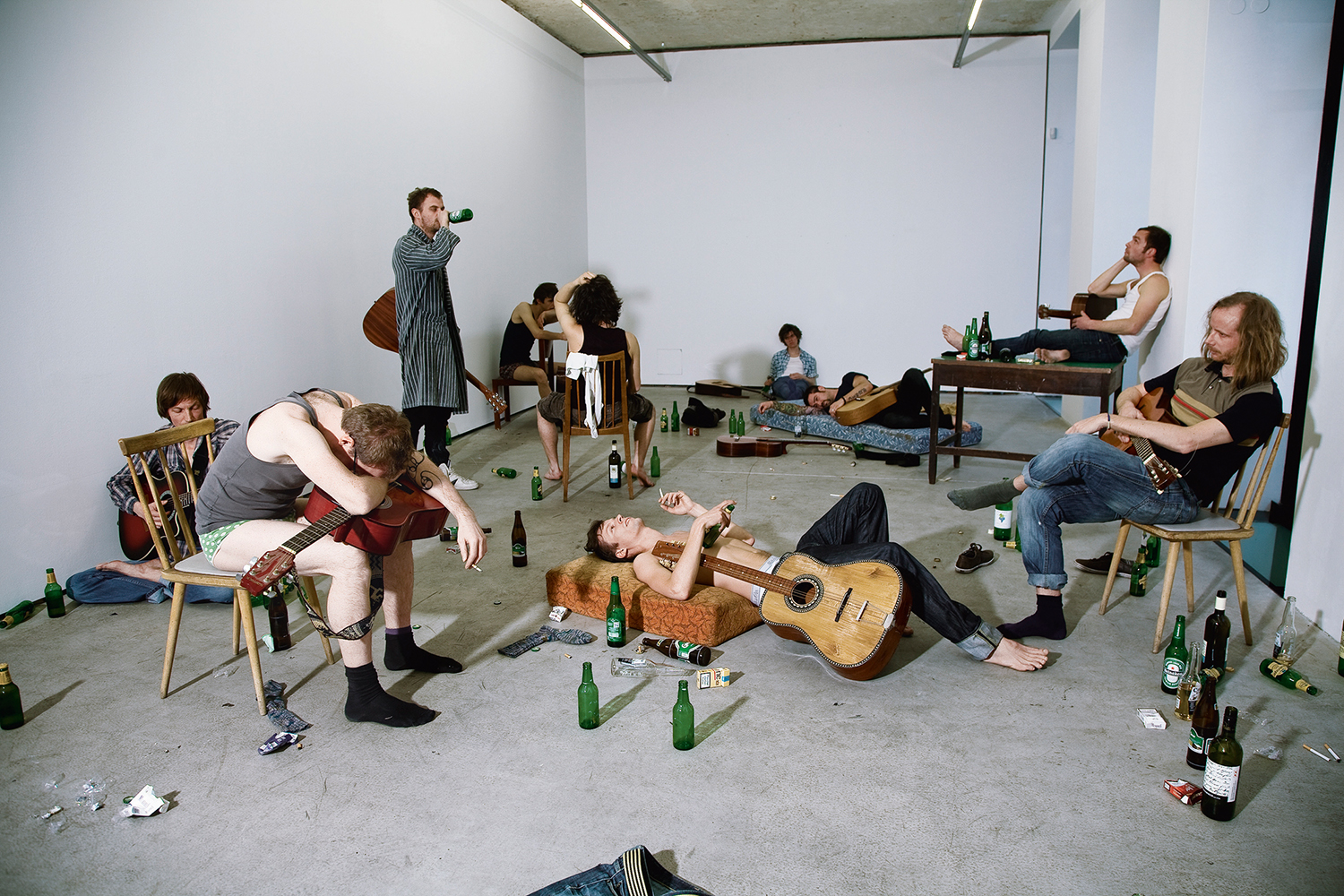 In 2009, Ragnar Kjartansson was the youngest artist ever to represent Iceland at the Venice Biennale. In a marathon performance called The End, he made one painting of the same friend wearing a Speedo every day for six months — with plenty of cigarette butts and beer bottles piling up along the way. The performance was characteristic of Ragnar’s work, which is imbued with a self-conscious playful- ness and guileless irony, often using repetitive per- formance to reveal unex- pected meanings.

With exhibitions at the New Museum in New York and TBA21 in Vienna, and a theater production at the Volksbühne in Berlin, 2014 is a big year for Ragnar. 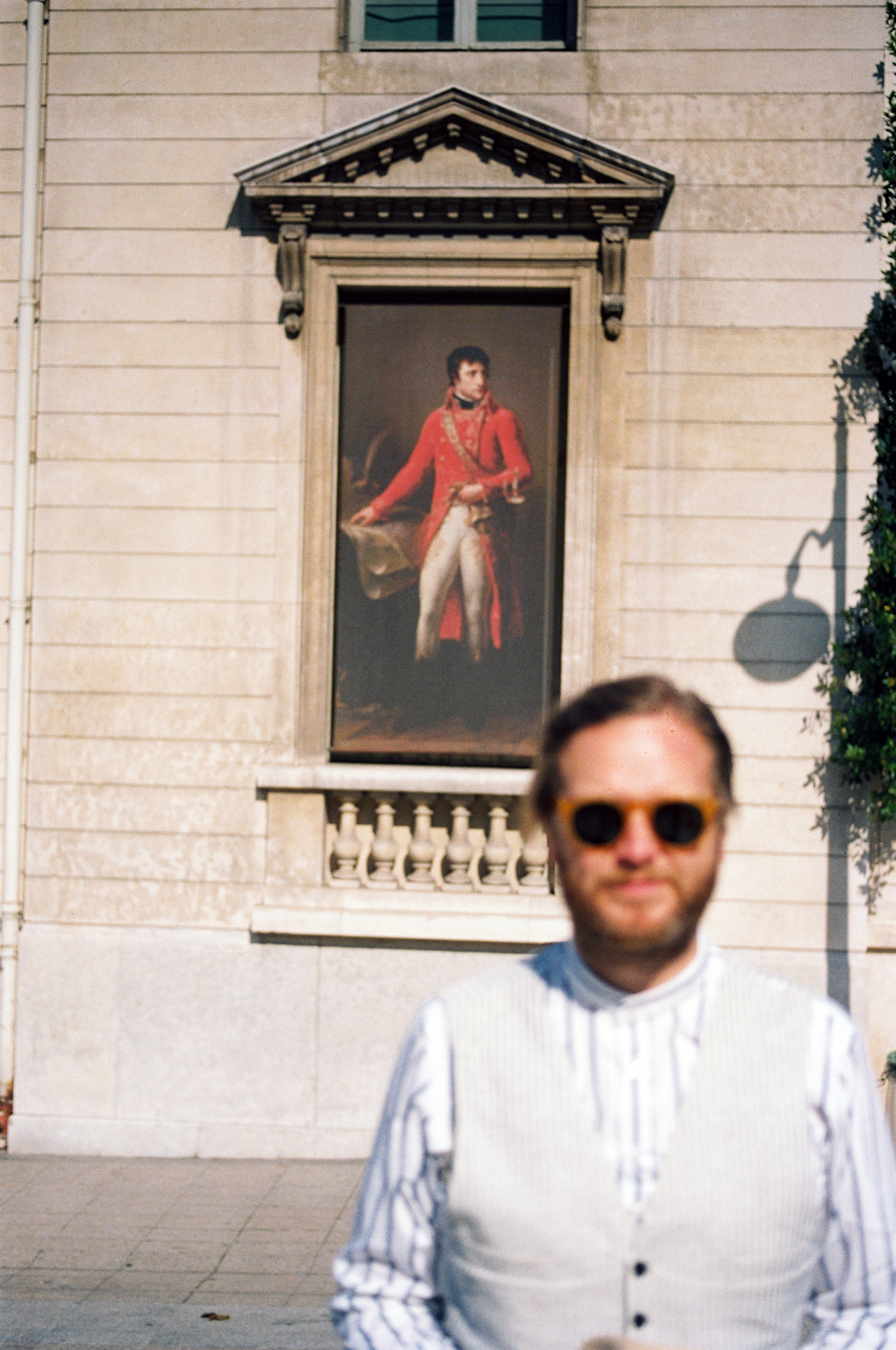 SVEN SCHUMANN — At university you studied feminist art. Would you describe yourself as a feminist?
RAGNAR KJARTANSSON — Yeah, absolutely. Feminism is the greatest and the most beautiful cultural revolution that ever happened. Half of humanity suddenly got a voice. Marx and Engels didn’t realize that when they were talking about the silent majority that was going to rise. And they were a totally silent majority, a shut-up majority.

SVEN SCHUMANN — How does feminism play into your art?
RAGNAR KJARTANSSON — I was blown away by feminist artists’ approach. They wanted to do everything again from their point of view; women artists were reclaiming the body from all the machos who had used it before. I’ve always been interested in gender and in researching my own totally uninteresting gender role. I’m a white, Western male. It’s so boring that’s it’s almost kind of controversial.

SVEN SCHUMANN — Were you the only guy studying feminist art?
RAGNAR KJARTANSSON — No, no. There were a lot of guys in the class, and some really attractive art-school girls as well. But I also did one of those tradition- al housewife schools before that, and I was the first guy to ever do that.

SVEN SCHUMANN — I am sure.
RAGNAR KJARTANSSON — I’m a trained housewife. I have a degree. It’s really super- helpful to know this stuff. See, I can iron my shirt perfectly while talking to you. 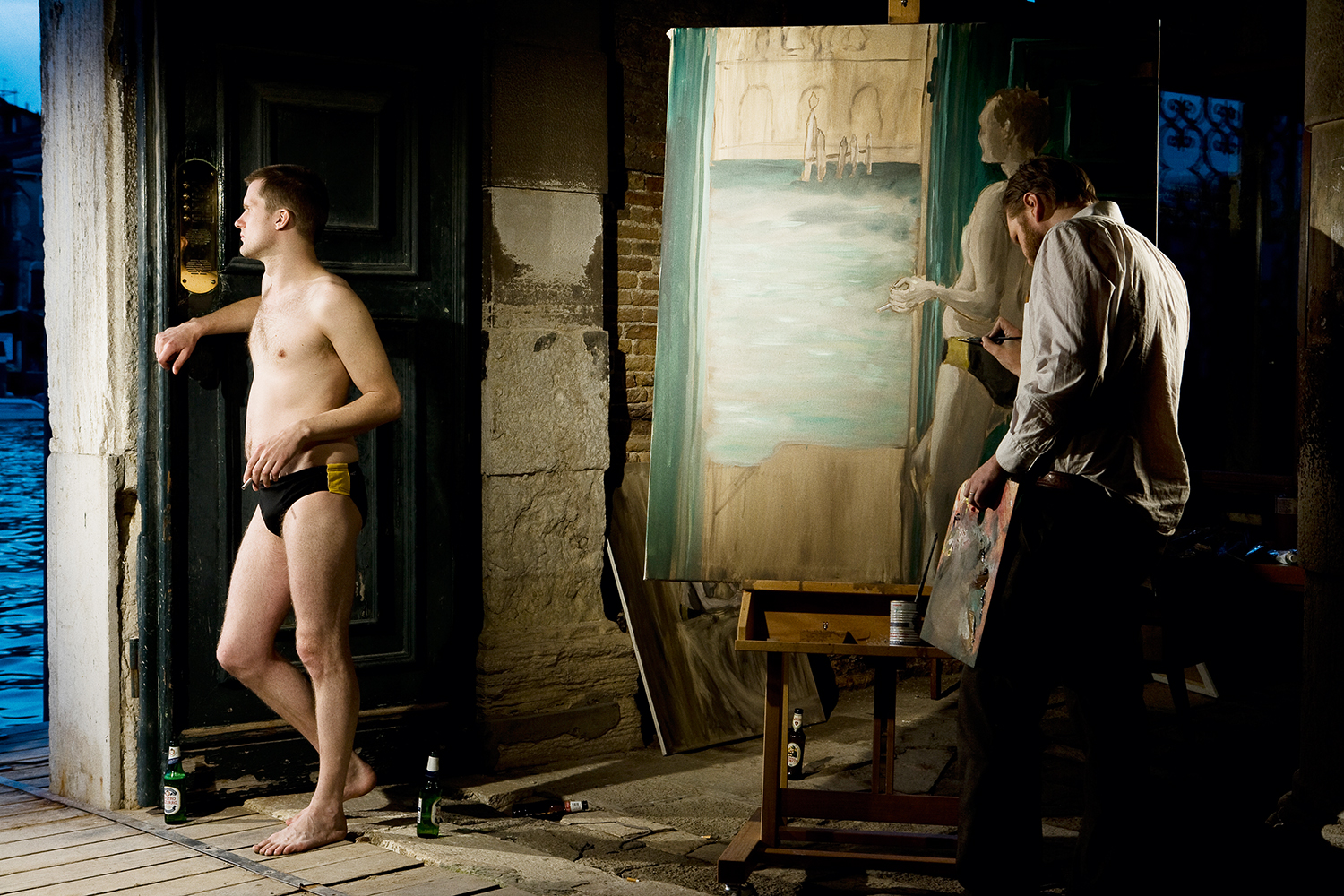 « The end-Venice », June 2009, installation, six-month performance at the 2009 Venice Biennale during which 144 paintings were made, commissioned by the Center for Icelandic Art. Photo by Rafael Pinho

SVEN SCHUMANN — One of your latest pieces is a month- long film shoot of a classic Icelandic novel. Everything — from the rehearsals to the costume and set design to the shoot itself — is part of the piece and open to the public. Do you plan on releasing the film when it’s over?
RAGNAR KJARTANSSON — I don’t really know. I mean, we’re going to edit it together and see. Maybe we’re just going to give it to our parents for Christmas. The outcome is not really important, and I like that. Normally when you’re doing a film you have to deliver it to the producers; people actually have to really like it and buy tickets and that’s… “Shit!” So it’s like making a film without the pressure.

SVEN SCHUMANN — It is an adaptation of the novel World Light, the magnum opus of the Nobel Prize-winning Icelandic writer, Halldór Laxness. The epic book is often called unfilmable, since it would require such a massive budget, but you are shooting it with your friends and family here in the rooms of the TBA21 in Vienna. Are you a masochist?
RAGNAR KJARTANSSON — It’s not just self-torture — it’s also sadism. It’s tortur- ing your friends. It’s even worse! [Laughs]

SVEN SCHUMANN — Your father is also involved in the project. Are you torturing him as well?
RAGNAR KJARTANSSON — Well, he is going to play a couple of the characters, but he’s also some kind of director. He’s a great theater direc- tor, actually. He knows how to create a scene, how the actors should move. I used to play in his productions when I was a kid, so we’re getting even now!

SVEN SCHUMANN — I read somewhere that your art always has to do with dreams that you try to remake. What kind of dreams are you talking about?
RAGNAR KJARTANSSON — Day- dreams. Art becomes an instrument to fulfill those daydreams. It’s almost like a superhero pill: you can do everything through art.

SVEN SCHUMANN — Is this also how your piece with the American rock band The National came together when they played their song “Sorrow” for eight hours straight at PS1 in New York?
RAGNAR KJARTANSSON — Yes. As a fan, you always use your iPod or record player to repeat the song you love — that’s how people listen to music nowadays. They repeat stuff over and over again. But that’s never how music is presented. It’s almost like taking the pri- vate experience and making it public.

SVEN SCHUMANN — What was your reaction when Jay Z copied that piece and made headlines with “Picasso Baby” only six months later?
RAGNAR KJARTANSSON — I was flabbergasted, I was bragging so much. I was so proud. I told all my hip- hop friends, “Okay, you think you’re something? Jay Z ripped me off, how cool is that!” 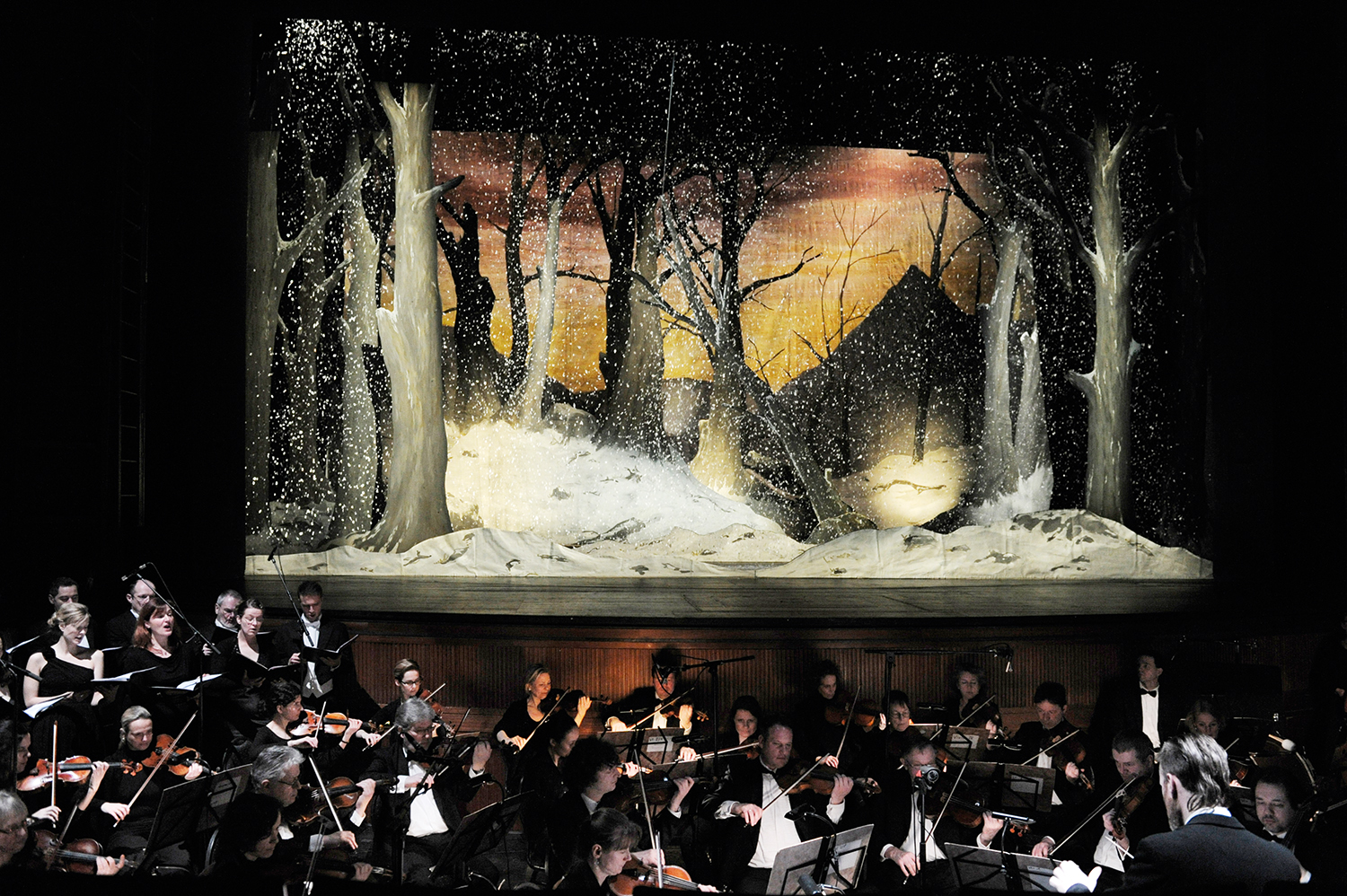 SVEN SCHUMANN — You weren’t upset at all?
RAGNAR KJARTANSSON — I think it’s just a cool approach. Just like, “I like this, I’m going to do it.” It’s kind of a musical attitude. “I like this beat, I’m going to use it.” There’s no stress that people are going to say it’s a rip-off or something like that. It doesn’t matter.

SVEN SCHUMANN — Anyway, most things have already been done in one way or another.
RAGNAR KJARTANSSON — True, and he has been working in similar ways. Before I did this with The National, I remember Jay Z and Kanye West repeated “Niggas in Paris” like eight times at a con- cert. So he probably heard about this project and was like, “Ah, that’s taking what I was already thinking to the next level.” He doesn’t give a shit. And of course he also knows that it just makes me look cooler. It’s a total gift to me.

SVEN SCHUMANN — How did you hear about it?
RAGNAR KJARTANSSON — I actually got an invitation to go to the event, but I was in Reykjavik. I was kind of lucky to be in Reykjavik. The problem is that he is cool, but the art world is so uncool in this video.

SVEN SCHUMANN — When was the last time you stole an idea from someone?
RAGNAR KJARTANSSON — I’ve never stolen so bluntly. It’s more like I’m a thief who knows how to hide my tracks. It’s definitely more about inspiration. My film project is inspired by the Schlingensief projects, for example.

SVEN SCHUMANN — There’s a fine line between being original or not.
RAGNAR KJARTANSSON — Nowadays, it’s only the personal that makes things original. If there’s a strong personal aspect in it, then it’s somehow always original. Imagine all the people with acoustic gui- tars singing songs. That’s crazy. But it can maybe be super powerful for some weird reason because there is something in there.

All photos copyright Ragnar Kjartansson, courtesy of the artist, Luhring Augustine and 18 gallery.