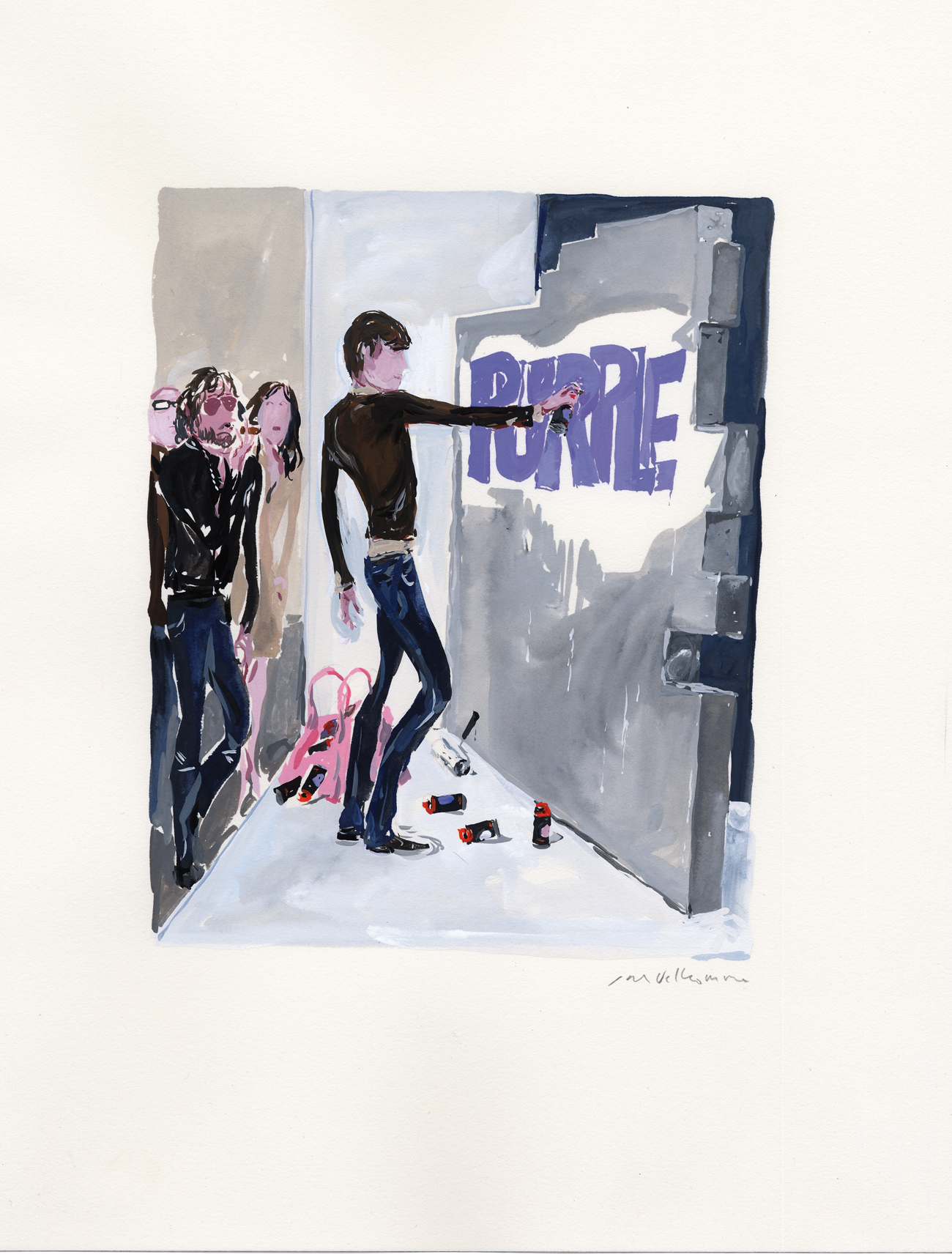 Performance by André for the book launch at Colette, Tuesday, May 27, 2008, Illustration by Jean-Philippe Delhomme

Introduction of the Purple Anthology by OLIVIER ZAHM

An alternative magazine is a poetic and political response. We launched purple prose in the early 1990s without any means, and without any experience, because we wanted to make a magazine that was radically different. We wanted to support the artists around us no one else supported, much less talked about.

We wanted nothing to do with the demands of advertising or advertisers. Writing exhibition reviews based on press releases was out of the question.

We didn’t want to publish theory or criticism; we thought that most of the time it was irrelevant in art magazines. We wanted to make a magazine that reflected the way we were, and the way we wanted to live; a magazine that was the direct and spontaneous expression of the vision of the artists we invited to write for, photograph for, and participate in purple prose. In 1992, faced with the crumbling of social utopias and artistic avant-gardes — the result of the postmodernism of the 1980s and the triumph of capitalist simulation (à la Jean Baudrillard) over every other suggestion of desire — the only possible path for us seemed to be  independence.

This took shape at the beginning of the ’90s, in the global alternative movement in music, film, and art galleries such as American Fine Art and Air de Paris. But it was no longer “underground,” in the political sense of the word widely used in the ’70s. Counterculture was disappearing; the new movement started as a commercial simulation (think back to Kate Moss in Calvin Klein ads by David Sims, or Madonna’s book, Sex, shot by Steven Meisel). Our idea at purple was to try and activate subtle subversion from within the system, not from outside of it, as the purity of the underground’s ethic had always demanded. Certainly we were against the hyper-capitalistic evolution of all systems of art and fashion. But we’d lost any kind of naïve fantasies of rebellion, dreams of revolution, or Punk visions of destruction and chaos. The times were far more complex. And far more interesting. We had to invent a different way of expressing a true and radical opposition that was light and delicate. One that was political but not militant, aesthetic but not pretentious, sexual but not pornographic. One that was filled with love but not sentimentality, generous and lucid, non-philosophical in the vein of Gilles Deleuze, Jacques Lacan, and later, Alain Badiou, and open to abstract forms. It would be a form of opposition of our own, different from the critical jargon of the generation of ’68.
A generation, incidentally, that took power and blocked every other vision of the time, including that of the contemporary art media. A generation from which, nevertheless, we descended.

We understood one thing: A single negation was no longer relevant. A double negation was absolutely necessary. Let me try to explain. The magazine we envisioned was not going to express the first conventional alternative, that of the negation of the underground, but the alternative to the alternative, the double negation. However abstract this may seem, it was really only an instinctive attitude, one that continues to be relevant in 2008. Double negation isn’t a simple position; it involves reacting to all the complexity of contemporary situations. It’s a position open to poetic blur, double play, intimate withdrawal, generosity, multiple identities, mystery, abstraction, and conceptual fluidity. It’s a simulation of simulations, but also of dissimulations. We curated an exhibition called L’Hiver de l’Amour at the Musée d’Art Moderne de la Ville de Paris (which we later mounted at P.S.1 in Queens as Winter of Love) that transposed this position. From the start, purple’s conceptual territory has been chiaroscuro, double-edged, ambiguous, on the verge of abstraction. It refuses to explain itself or offer apology.
It’s an artistic position still largely unexplored.

For many years the magazine was associated with a realist aesthetic, that of the new photography of the early ’90s — of photographers like Juergen Teller, Terry Richardson, Wolfgang
Tillmans, and Mario Sorrenti. From a visual standpoint, we represented the break from ’80s imagery (like Richard Avedon’s photography for Versace, for example). From an artistic standpoint, the artists of the early ’90s were rising up against art as capitalist fetish; they were aligning themselves with the artistic social and political practices of the ’70s — those of performance, video art, Fluxus, and the conceptual and minimalist avant-garde. 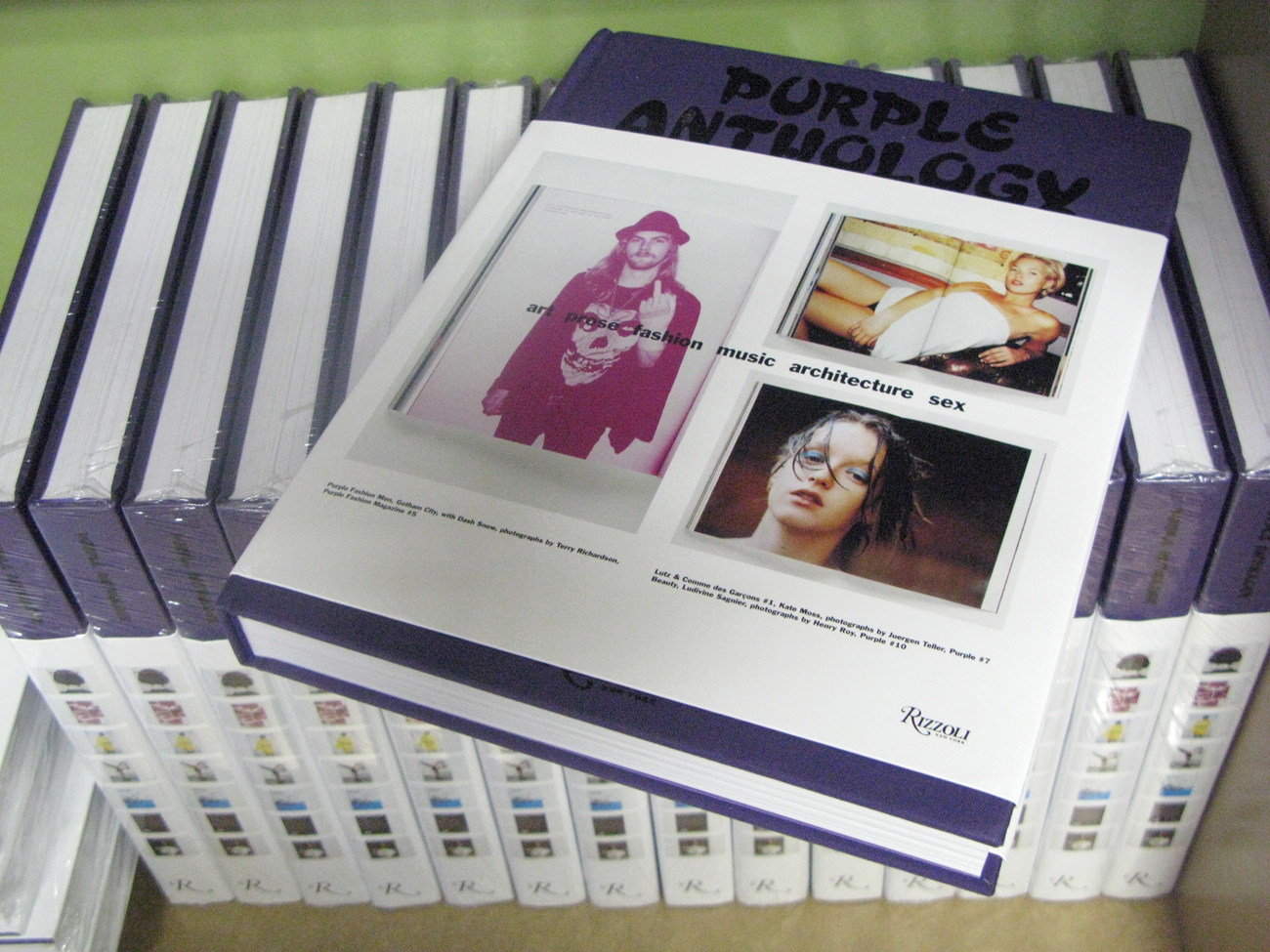 Our magazine was an integral part of this burgeoning context, which included the deconstruction of fashion by Martin Margiela and Comme des Garçons; the return of subtle political art, with that of Felix Gonzalez-Torres, Maurizio Cattelan, and Philippe Parreno, among others; the photography of Juergen Teller and Terry Richardson; and Harmony Korine’s and Larry Clark’s independent filmmaking. purple emerged directly out of this artistic context, and our aesthetics, like our editorial decisions, were, and still are, directly connected to it and that which results from it. We continue to depend on this context, but purple’s “realism” is not only an aesthetic matter: it also involves a paradoxical relationship with Guy Debord’s Society of the Spectacle, and includes fashion, art, and magazines.

We thought it was entirely possible to fight against the ugliness, standardization, violence, and vulgarity that marked the triumph of industrial culture over the avant-garde. This meant we had to reconsider everything: Which texts should be published? What images interested us? Which designers? Which sexuality? Which forms of art? Which desires? Fifteen years later, we’re still asking ourselves the same questions, but in a context that has changed radically. Debord’s “integrated spectacle” has become global virtual reality. But there is still the same political need and relevance. This is why it still makes sense to put out a magazine like purple today — it has its raison d’être in the age of the Internet, in the age of generalized cultural consumption and virtual amnesia.

A magazine is a dream — to quote the artist Robert Filiou, “a butterfly’s dream, but which one?” Seemingly light, with an extreme economic fragility, and a lifespan lasting only a few weeks, a magazine is capable of action that deeply affects the propagation of ideas, beauty, and their explosive power. It’s the dream of a group of people who share, and experiment with, a singular vision and a desire for change and escape — without necessarily knowing how to articulate it. All in a time when everyone feels change is impossible, a lost cause.
A magazine is not exactly media, in the sense of information; it is a visual, textual space that can shape a generation. In its pages, a generation invents itself, finds itself, and deceives itself. In saying that purple is the portrait of a generation, I mean it’s a portrait of those who embody their times. At the same time, it’s a portrait of myself and Elein Fleiss, our ideas, our lives, and our aesthetics. If a magazine doesn’t reflect its creators, it has no real reason to exist — it’s just more press, a vehicle for information transmitted through images and articles that has no real quality. All the magazines that inspired us, like Interview, Ray Gun, Nova, and File by General Idea or Helmut Newton’s Illustrated, have this personal touch. In our magazine we wanted to resurrect the old utopian ideals that narrow the gap between art and life.
And we wanted, and continue to want, our lives to be the grounds of possibility. Ambitious? Perhaps. But, there was, and is, nothing else interesting enough for us to attempt to achieve.

purple was, and continues to be, something worth holding on to at all costs, even though we’re up against overwhelming laws of business and the virtual dimension of cultural consumption.

What is PURPLE’s dream? To escape the syndromes of depression, by celebrating art as the only true antidote to cultural consumption. This has been PURPLE’s credo from the beginning, a credo that connects us to the reality of our lives, and strengthens our desire to change our way of life.

PURPLE asserts that art is the reality point that you should never let go of, and that we have access to it through the magazine itself. We declare loud and clear, with all the means of the virtual world if necessary, that art as creation is superior to culture as consumption, no matter how hip and contemporary that culture may be. In this sense, the magazine’s realism is not only a question of photographic or artistic aesthetics. The magazine itself is a reality point, an exception to the commercial rules of other magazines, as well as to the anti-commercial stance of the underground. From this point of view, purple’s independence is an editorial position that continuously strives for liberation by piercing through the artificial and downward-spiraling bubble of capitalist virtuality.

This may be impossible to achieve, and may end in failure. But this is our position, and we hold it not with a sense of arrogance or snobbery, but with an instinct for survival.
The alternative to the alternative was, and remains, open territory, a place where purple has been an antecedent. And while purple has been copied widely — or has at least inspired many other magazines — it is less because of its aesthetic, which has been called “realist” and anti-fashion, than because it cleared a path: the alternative to the alternative. This path does not live by the laws of business or media marketing that lead to the domination of commercial criteria. Nor does it live by the purist discretion of an underground cult magazine that clings to its righteousness as it falls and fails, devoting itself only to depression and the metaphysics of The End, as it details the world’s rush to ruin. purple is a dream that keeps the desire alive.