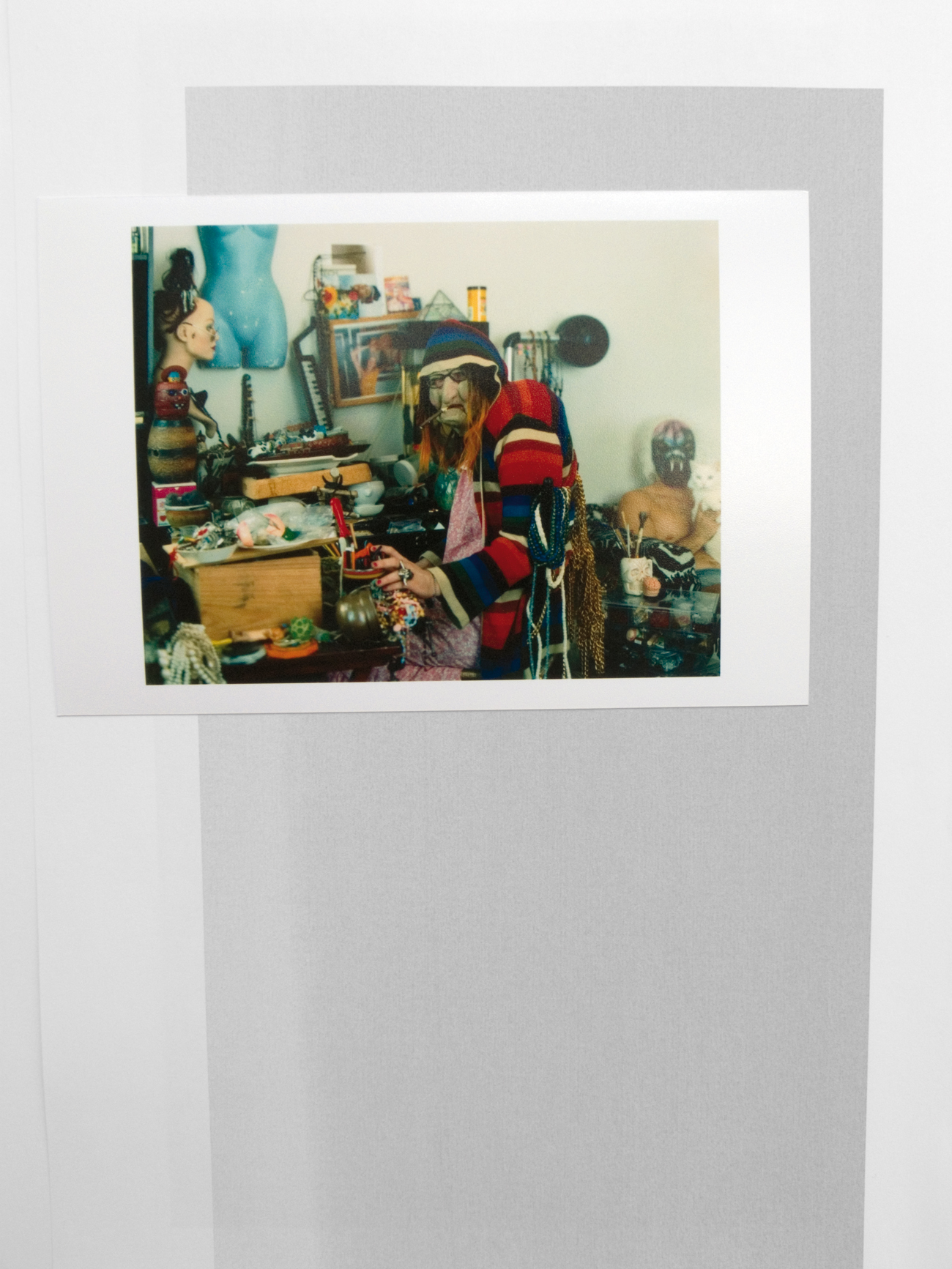 Consumers exchange merchandise everyday, for a variety of reasons, but how often do you hear of superstition being the cause? That’s exactly what happened after a man bought his wife one of Daniel McDonald’s “Bad Luck” charm bracelets for a surprise. He returned the piece, along with the black cat figurine it’s sold with, and bought a “Questionable Beliefs” charm bracelet instead. This piece comes with a miniature heart, a ghost, an alien, Christ and Santa Claus figures, a dollar sign, and a suite of fairy pendants, and is accompanied by a museum catalogue about unicorns. Both works were on display at Salon 94’s Crown Jewels exhibition last winter. Daniel McDonald, seen here as his alter ego, Mindy Vale, credits Haim Steinbach and Robert Mapplethorpe as influences. He also likes the way flea-market street vendors display their wares in unique combinations to elevate interest in a particular item. His approach appears to have paid off. A roster of creative people, including Mary Heilmann, Liz Goldwyn, Cynthia Rowley, and Kembra Pfahler, have purchased his jewelry. McDonald is no stranger to the art world. In 1992, at the urging of legendary gallerist Colin de Land, the man behind American Fine Arts, he and a group of six other Cooper Union students formed Art Club 2000. The collective’s first show at American Fine Arts was a group of photographs critiquing The Gap, or, more precisely, Gap’s advertising, which promises its customers individuality but in fact sells them khaki conformity. He eventually became the gallery’s co-director, a position Colin de Land defined as “archive queen.” Danny has for a long time kept up a little jewelry business on the side to supplement his income, because he says it felt like a natural extension of the sculptures he made at school — only on a scale manageable enough for his tenement apartment. In the late ’90s he began collaborating with clothing designer Susan Cianciolo on her “Run” collection. His contributions morphed into his biannual jewelry line, Mended Veil. Danny’s career was never mapped out; it all just seems part of a seamlessly fluid accident. Last spring he participated in a group show at Terrence Koh’s studio in Chinatown, an exhibition that is slated to move to Javier Perez in L.A. this October. Having been at it for almost two decades now, Daniel McDonald’s formula for success is quite simple: do what you do, never lower your expectations, and never give up any ground you’ve already taken.