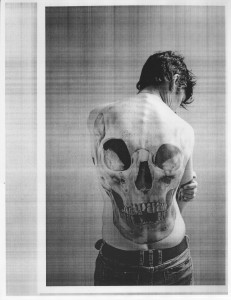 Book cover of The Chance is Higher by Ari Marcopoulous

The Chance is Higher, published by Dashwood, New York
www.dashwoodbooks.com

Ari marcopoulos was born in Amsterdam and moved to New York City in 1979. He printed photographs for Andy Warhol and later became involved in the thriving hip-hop scene, photographing artists like Fab 5 Freddy, Run-D.M.C., and the Beastie Boys. He followed the latter group around for six years, shooting them constantly, and eventually produced the book, Pass the Mic, a Beastie Boy vade mecum, in 2001. Marcopoulos now lives in Sonoma, California.His photographs have appeared in The New York Times, Interview, Paper, Blind Spot, and many snowboarding magazines. He is also a filmmaker and an artist. One of his themes concerns the risky, youthful netherworlds of hip-hop, skating, snowboarding, and tagging, which also lead to reflections on normal life as it juxtaposes art and the transitions of youth. He shoots wherever life and his cameras take him. His trajectories reveal related lifestyles and his own life in transit. His latest book, The Chance is Higher, from which this series was taken, is based on a selection of pictures he  shot over the years. A traveling exhibition by the same name appeared at MC in Los Angeles, at the Gallery White Room in Tokyo, and at the New Orleans Museum of Art. It featured large, photocopied black-and-white photographs, and an accompanying video installation.