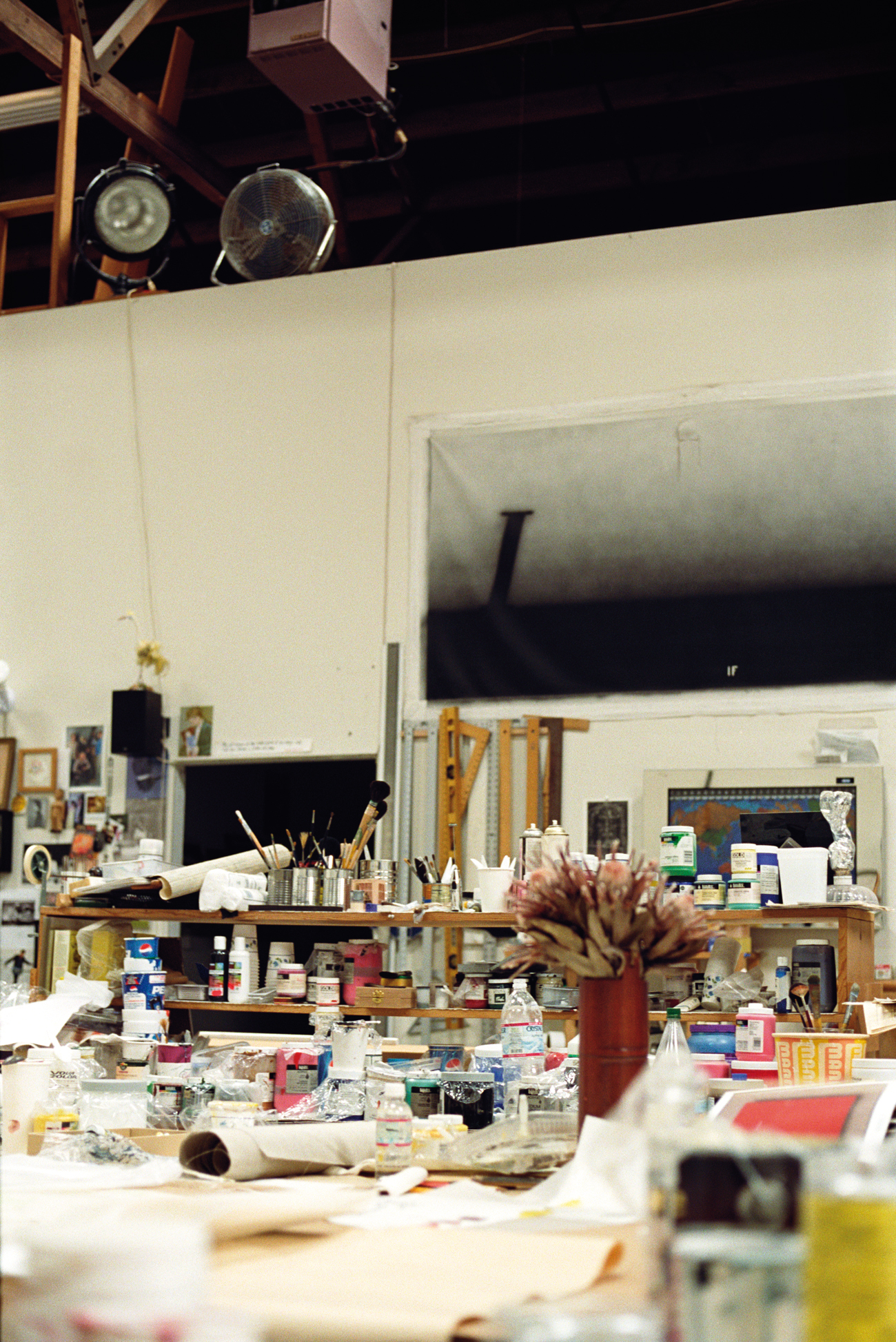 From the outside,ED RUSCHA’s studio in Venice Beach, California, resembles one of his famous Course of Empire paintings — an anonymous-looking industrial complex, minus his trademark signage. Ruscha has been working there since 1982. We stopped for a short
visit with of one of California’s best-known painters — and one
of our favorite artists. 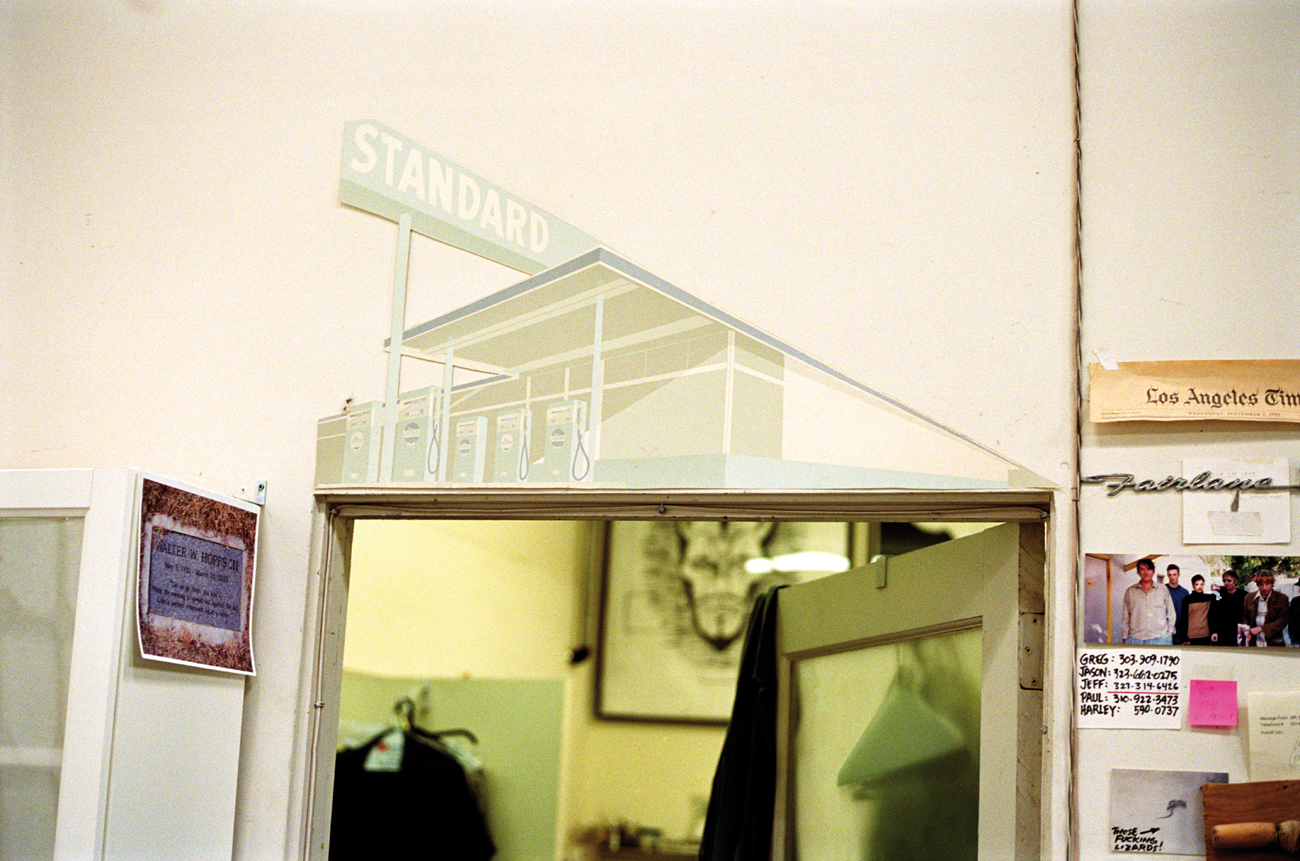 BILL POWERS — You live in Swifty Lazar’s old house. He was the Hollywood super-agent who threw legendary Oscar parties every year, before Vanity Fair started hosting theirs.
ED RUSCHA — Yes. I met him once, but we didn’t know each other. If you ever laid eyes on the guy there’s no way you’d forget him. He was a little doddering man with giant, circular, dark-rimmed glasses who took little baby steps. You get the picture? His house was a total party house. Sometimes I’ll run into someone who knows I live there and they’ll ask me, “You know at the back of the library where you have the three sliding glass doors? Does the middle one still leak when it rains?” And I’ll say, “Yes, it does!”

BILL POWERS — You’ll probably bump into someone who has had sex in your bathroom.
ED RUSCHA — No doubt. The only other thing I know about Swifty is that he used to collect so-called art. The story goes that one day he decided to send his collection to auction. He had a series of Goya etchings, probably from Disasters of War. He gathers them up and takes them over to the auction house. The representative explains that he would like to examine one of the etchings out of the frame, if that’s okay with Swifty. So he take it out, and it turns out they’re all pages he’d clipped from magazines!

BILL POWERS — He’d probably been telling people they were real for so long that he’d forgotten that they were fake. How did it come about that you moved into his place?
ED RUSCHA — My wife found this house. I went to see it and I liked it a lot. I only found out it was Swifty’s place after the fact. I think that after he died — it must have been 15 years ago — his wife lived there a while, and someone else after that. 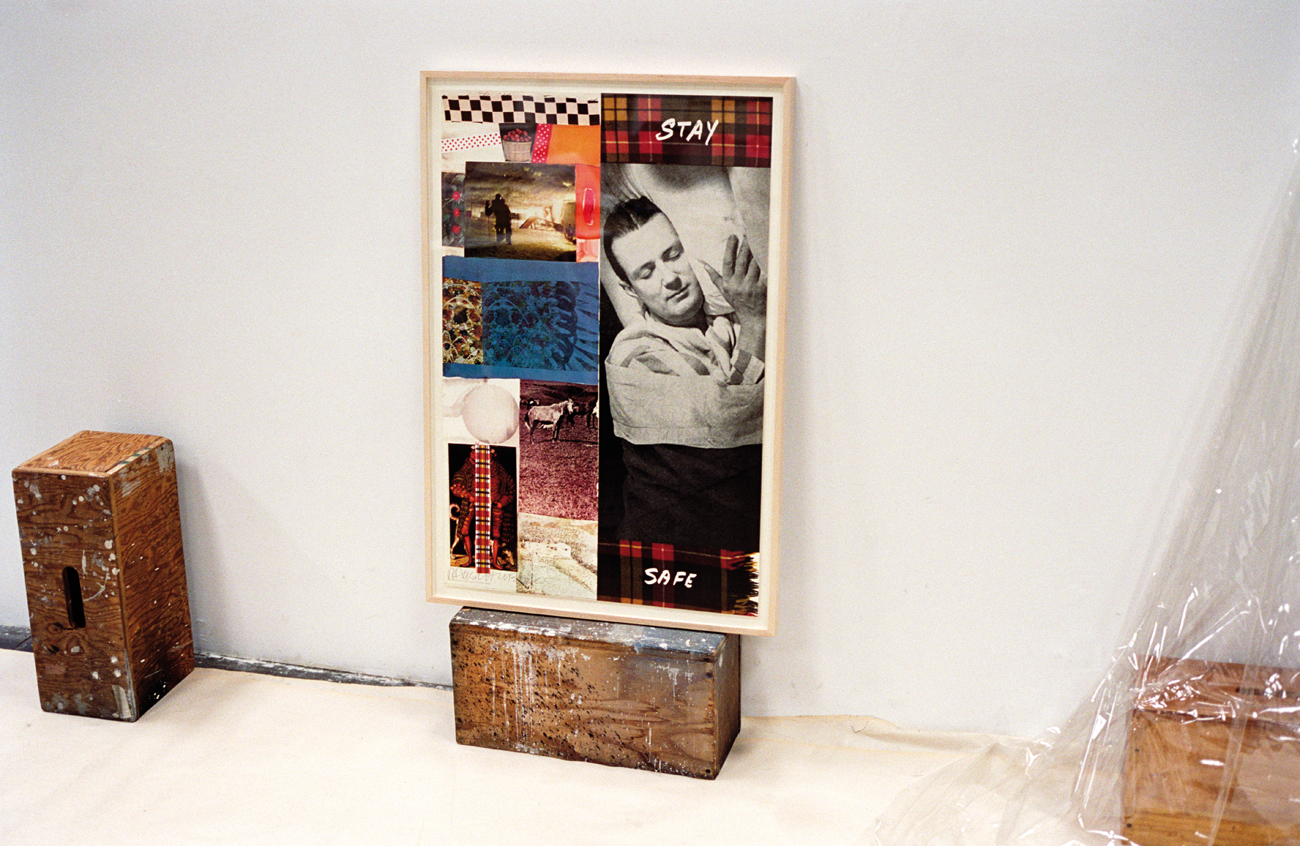 BILL POWERS — Do you have a little studio at home?
ED RUSCHA — Well, artwork is always being done there. I might do drawings in a sketchbook. Or homework — reading, and stuff like that.

BILL POWERS — What are you working on right now?
ED RUSCHA — I still have the basic menu of all my work and I’m not really setting about to alter that. I’m not onto anything truly specific at the moment. I’m sort of cleaning up, collecting paperclips, and waiting on the next little surge. I’ve got some thoughts — they’re always fractured thoughts, based on ideas I’ve had. I’m not one to sit staring at a blank canvas. There’s no real strategy behind what I’m doing until I agree to do an exhibit. Then I realize, here it comes: that dreaded word, “deadline.”

BILL POWERS — You did a commission for James Frey after his Oprah fiasco. Until then I never knew that you did private commissions. I only know about the projects you’ve done for libraries and public spaces. Have you done any of these recently?
ED RUSCHA — I did one last year at a federal courthouse in San Francisco, a building designed by the architect Thom Mayne. You know those bureaucratic groundbreaking ceremonies, right? They had an opening reception for the 18-story courthouse Mayne designed, and let me tell you, the building was dramatic. Really bold. Anyway, at the ribbon cutting he gets up and makes a speech, and at the end of it he says, “So, here’s your building: about the same price as eleven and half hours of the war in Iraq. That’s what it costs you!” 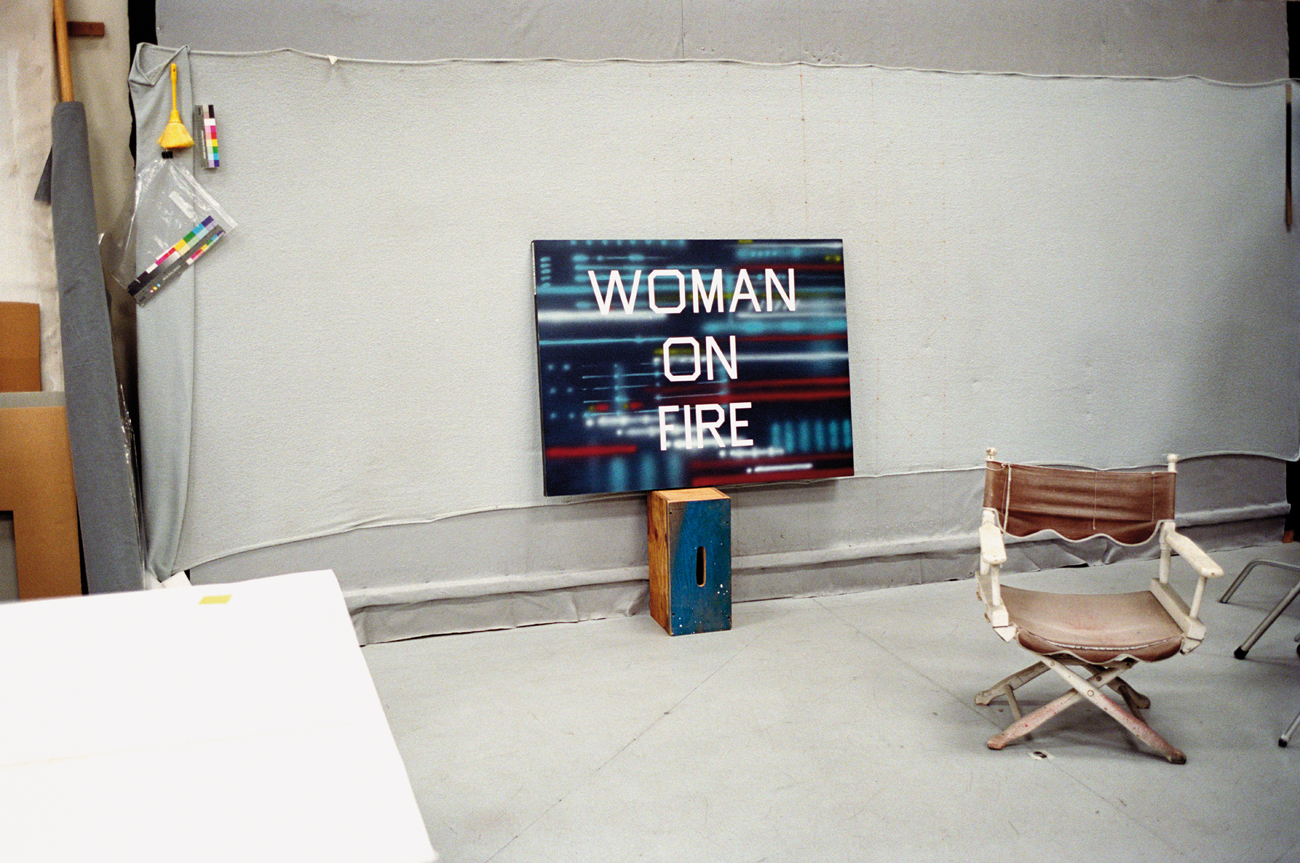 BILL POWERS — I’m sure that went over like a lead balloon in a room full of judges and government workers.
ED RUSCHA — Nah, people were cheering.

BILL POWERS — What was your contribution to the space?
ED RUSCHA — Well, there are four open areas inside the building, one atop the other.
On the walls of these I hung four giant banners that had palindromic statements running up and down, sort of like an elevator. James Turrell did a big skylight up on the top floor, which is partially out in the open. From what I understand, you can see the building all the way over from the East Bay, from Oakland and Berkley. It’s a green building — apparently they don’t even
have air-conditioning. It’s cooled by the winds and requires minimal heating in the wintertime. I guess for the most part it’s a self-sustaining operation. 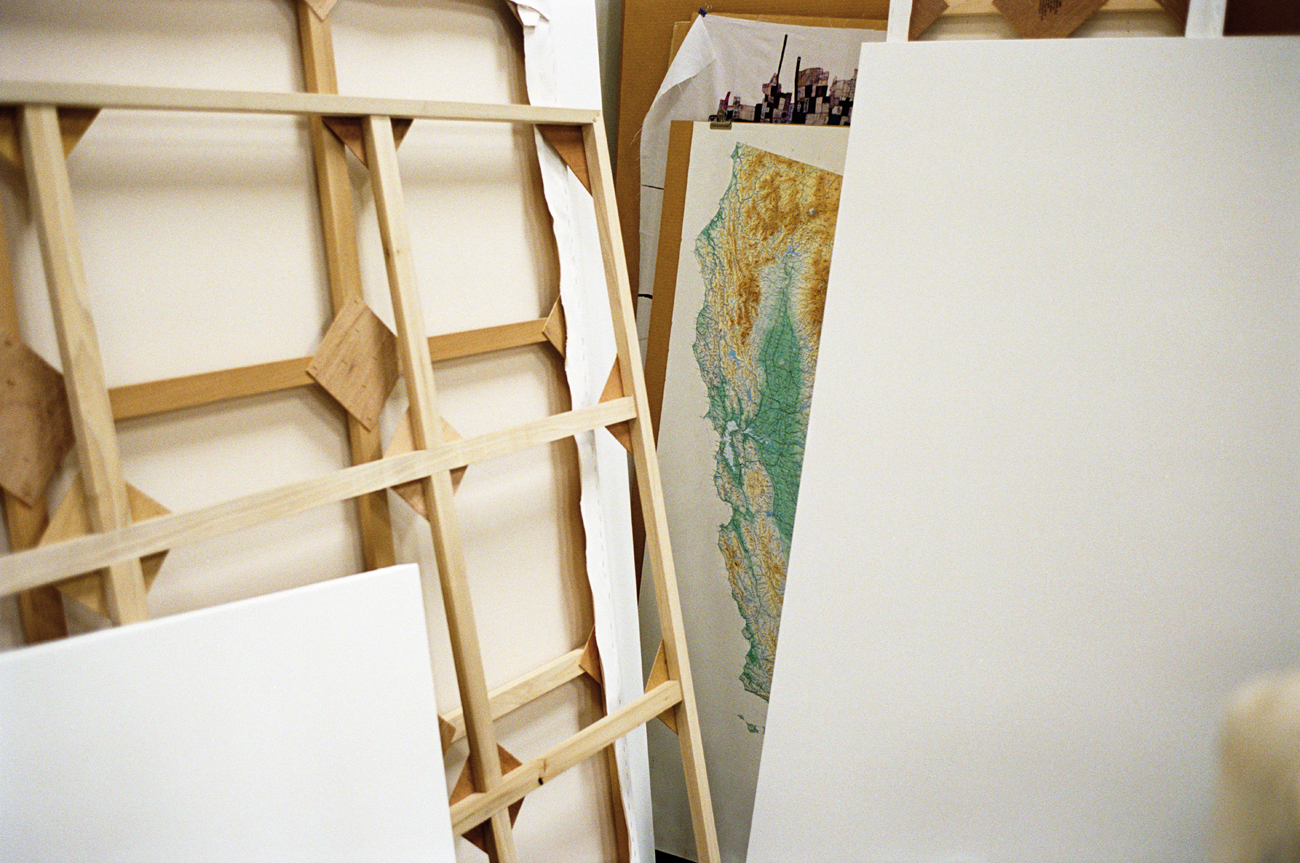 BILL POWERS — You travel quite a bit, often to Mexico. Why do you have a continuing attraction
to that country?
ED RUSCHA — I first went to Mexico City in high school with my parents. My older sister went to college down there. I had never really been to a big city like that before. Well, I’d been to Chicago, but I had never confronted that level of sophistication. It was very cosmopolitan. My sister was dating an architecture student at the University of Mexico. Our visit happened to coincide with a big party they threw. There were stuffed pigs and violinists — it just wowed me over. Since then I’ve been back many times. I was invited to do an exhibit there a couple years ago, a show Dave Hickey curated. I took some side trips, and on one of them I found an urban guerilla art statement on the side of the road, a wall piece that seemed to have no commercial attachment.

BILL POWERS — That was the basis for your painting, Azteca, the one in which colors melt down the face of the canvas. In it you retain the graffiti that someone painted over the original. What was your thinking? That the defacement should remain intact even when the art it covers starts to decay?
ED RUSCHA — It’s one of those inconsistencies that I liked right from the beginning. Why doesn’t the graffiti erode with it? It’s almost like somehow it had been preordained to stay. Like it was invisible. Someone had tagged that wall, and I was going to replicate it as faithfully as if it was some sort of ghost pattern. 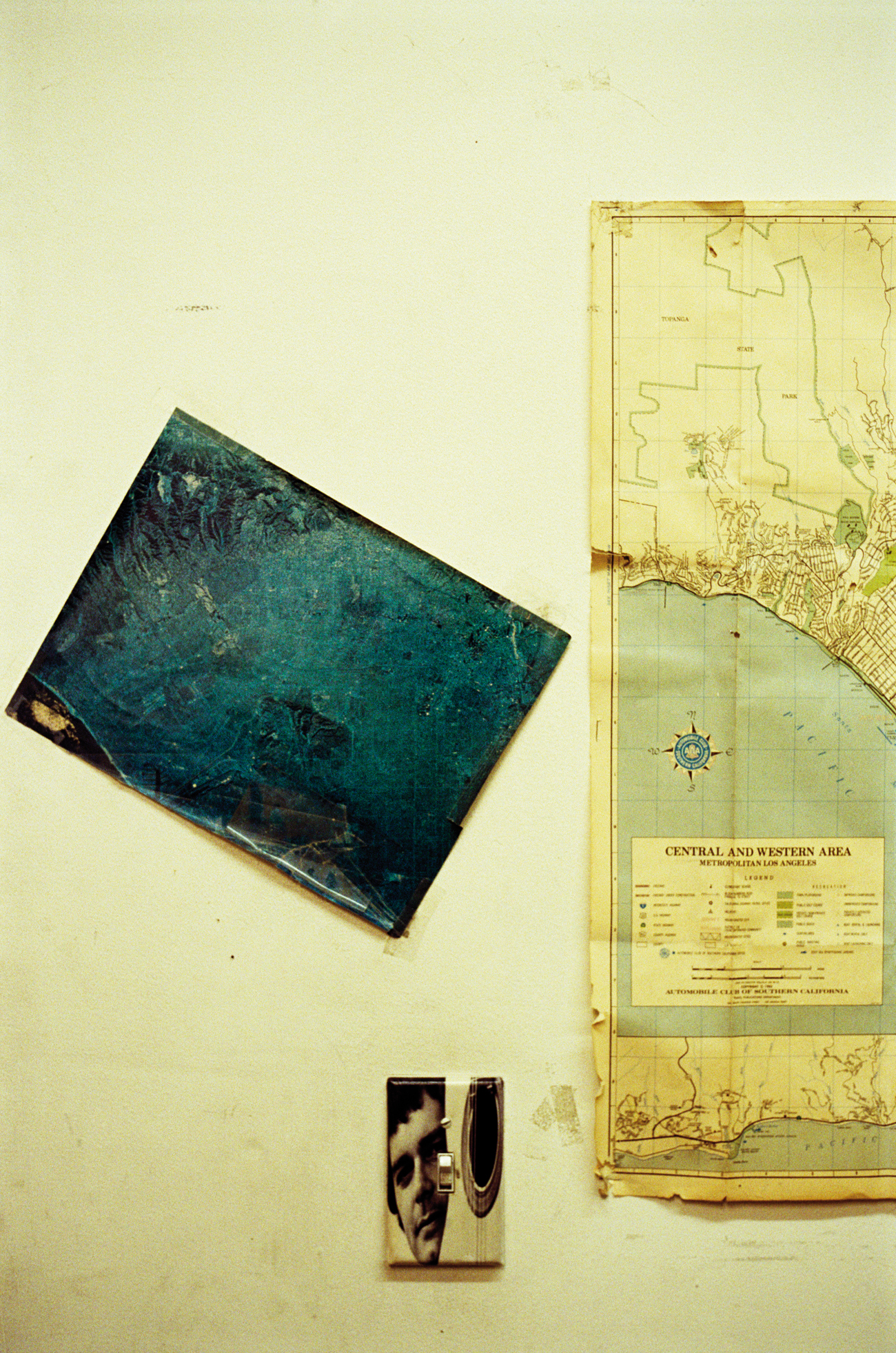 BILL POWERS — Do you think that as you get older you’re more interested in the idea of decay?
ED RUSCHA — I think it’s just that as I get older I have more personal decay to draw from. The absurdity and humor of the human condition starts to seep in. I may be conser-vative in the sense that I hate to see things change. If a house gets torn down around here it makes me mad. Probably because I can imagine what’s going to replace it.

BILL POWERS — In your last show at Gagosian Gallery there were pictures of your signature landscapes, only now they’re obscured by the tops of houses and factory buildings. Is that a commentary on urban sprawl?
ED RUSCHA — Yes. I go out to the desert a lot and I see it changing all the time. I’ll see things pop up on Indian-owned land out there, casinos and all sorts of stuff. Nine-tenths of Palms Springs is Indian land. Where I like to go is just north of that, in the high desert.

BILL POWERS — Robert Rauschenberg passed away last month. How did that affect you?
ED RUSCHA — I went back to my files and pulled out an old piece we collaborated on in the ’70s. Bob created a charity foundation called Change Inc. If an artist needed some kind of financial assistance, got sick or something, they could go to it for help. He asked me if I would do a poster to raise money for it. I said, “Okay, but why don’t we do it like this? We’ll just divide the thing right down the middle vertically. I’ll do my side and you do yours. But we won’t reveal what each of us is doing until it comes back from the printer.” Bob liked the idea. We had a poster signing at the L.A. County Museum in 1978. When we unveiled the thing we saw that we had both used Scotch plaid on our sides of the piece, independently of each other. 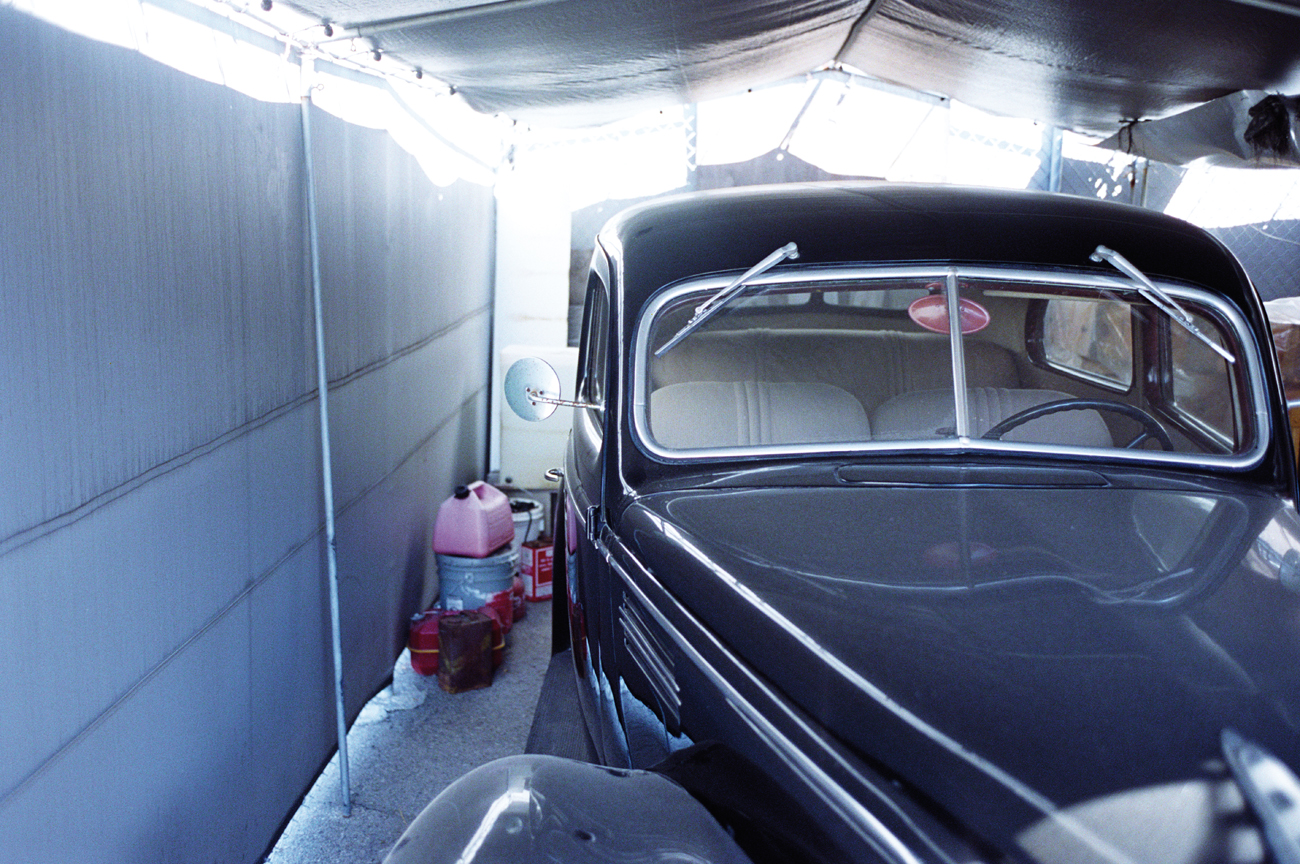 BILL POWERS — That’s insane! What are the odds?
ED RUSCHA — Someone should put together a book of all of Bob’s great quotes. After I heard that he had died, I immediately thought of a quote of his. He said, “I’ll tell ya: death isn’t so bad — it’s that eternity thing I can’t get with.”

BILL POWERS — I saw your son at a Matthew Barney performance here in L.A. last night. Do you go to a lot of happenings like that?
ED RUSCHA — I don’t get to as many art events here in L.A. as I do in New York, because when I’m home it’s too easy to justify holing up. Otherwise, I would be running around, going to things all day.

BILL POWERS — The painting you made for the actor Bud Cort, I Don’t Want No Retro Spective, sold last week at Sotheby’s for almost four million dollars. It made me think of the old adage, “If you want to lose a friend, lend them money.” For a well-known artist such as yourself, maybe it should be amended to read, “If you want to lose a friend, give them a painting.” Do you ever feel betrayed when a piece you made specifically for someone goes up on the auction block?
ED RUSCHA — I try not to take that part of it too seriously. If you were of the wrong mindset it could just poison you. That’s happened to me before, but it didn’t in this case. Bud’s a great friend and it was all very equitable. It comes back to the novelty of auctions. I’m sure the concept of the auction has always intrigued people. And if there were no auctions, all we’d have is a secret society of art dealers — no one would ever know what anything went for. 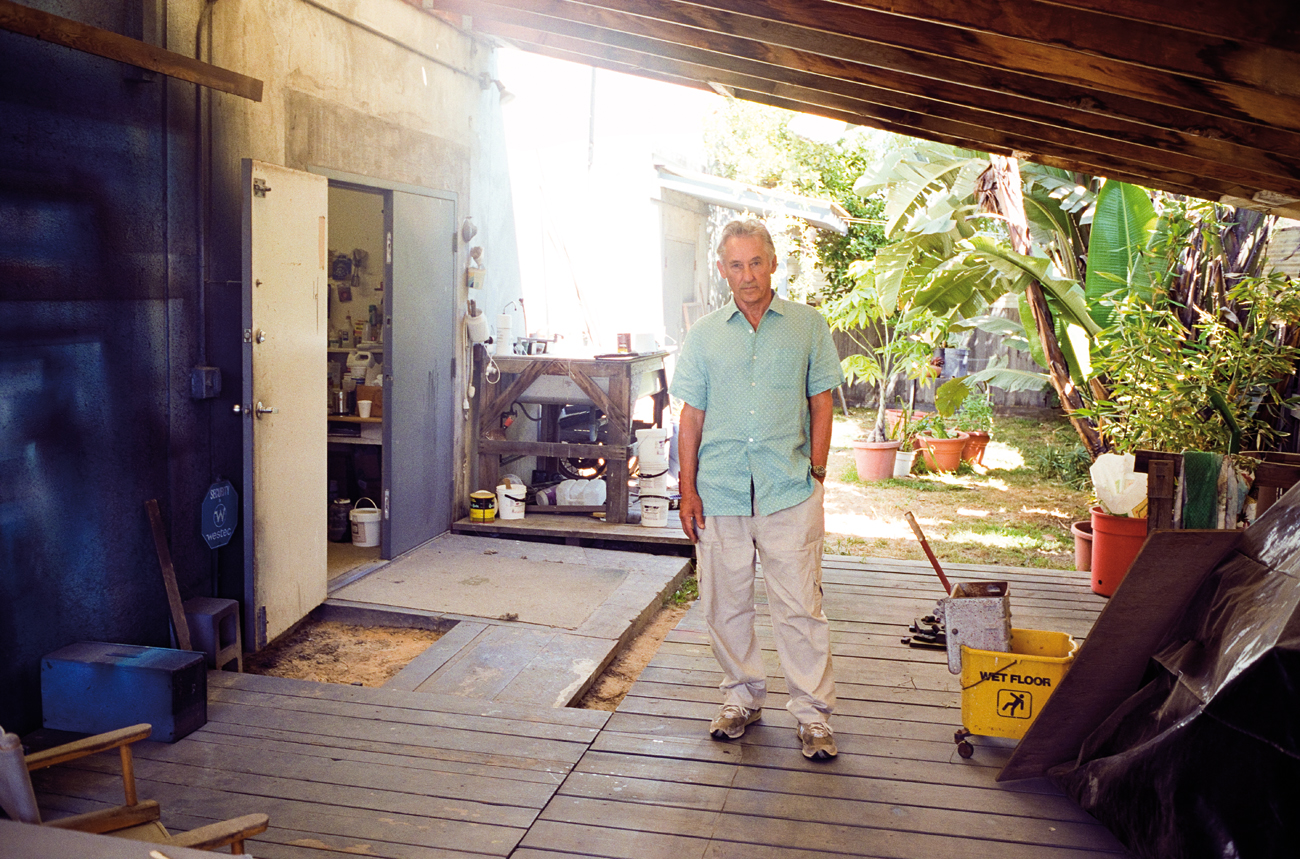 BILL POWERS — You hitchhiked cross-country as a young man. Do you remember the last time you thumbed a ride?
ED RUSCHA — It was in 1963. Joe Goode and I hitchhiked from L.A. to New York. We stopped in Oklahoma City for a day, because that’s where we were both from. It took another three days to get to Pittsburg. We could not get out of there for the life of us, so we broke down and got a $19 bus ticket to New York. I don’t even think they’ll let you hitchhike today. Not on the highways, at least. I never see hitchhikers now.

BILL POWERS — You did an album cover for
Mason Williams in the ’70s. Your credit on the back cover reads, “Sorry. Cover by Edward Ruscha.” What’s that all about?
ED RUSCHA — I think that happened because Warner Brothers didn’t like the fact that the only text on the front of the cover was the word “MUSIC.” Nothing else was on it. Mason Williams really fought for that.

BILL POWERS — Is Mason Williams still around?
ED RUSCHA — Yeah. We’re still great friends. We’ll get together, smoke a joint, and get absurd. He still has a great capacity for all that. He lives up in Eugene, Oregon. He’s kind of retired from the music scene, but he still writes stuff. He’s just not that active in the music business. Every so often he does a gig in L.A. and we’ll hang out.

BILL POWERS — I can e-mail you a transcript of this interview if you want to read it before the magazine comes out.
ED RUSCHA — That’s okay. I don’t think I said anything too X-rated.

BILL POWERS — I’m pretty sure you couldn’t say anything too X-rated for Purple.