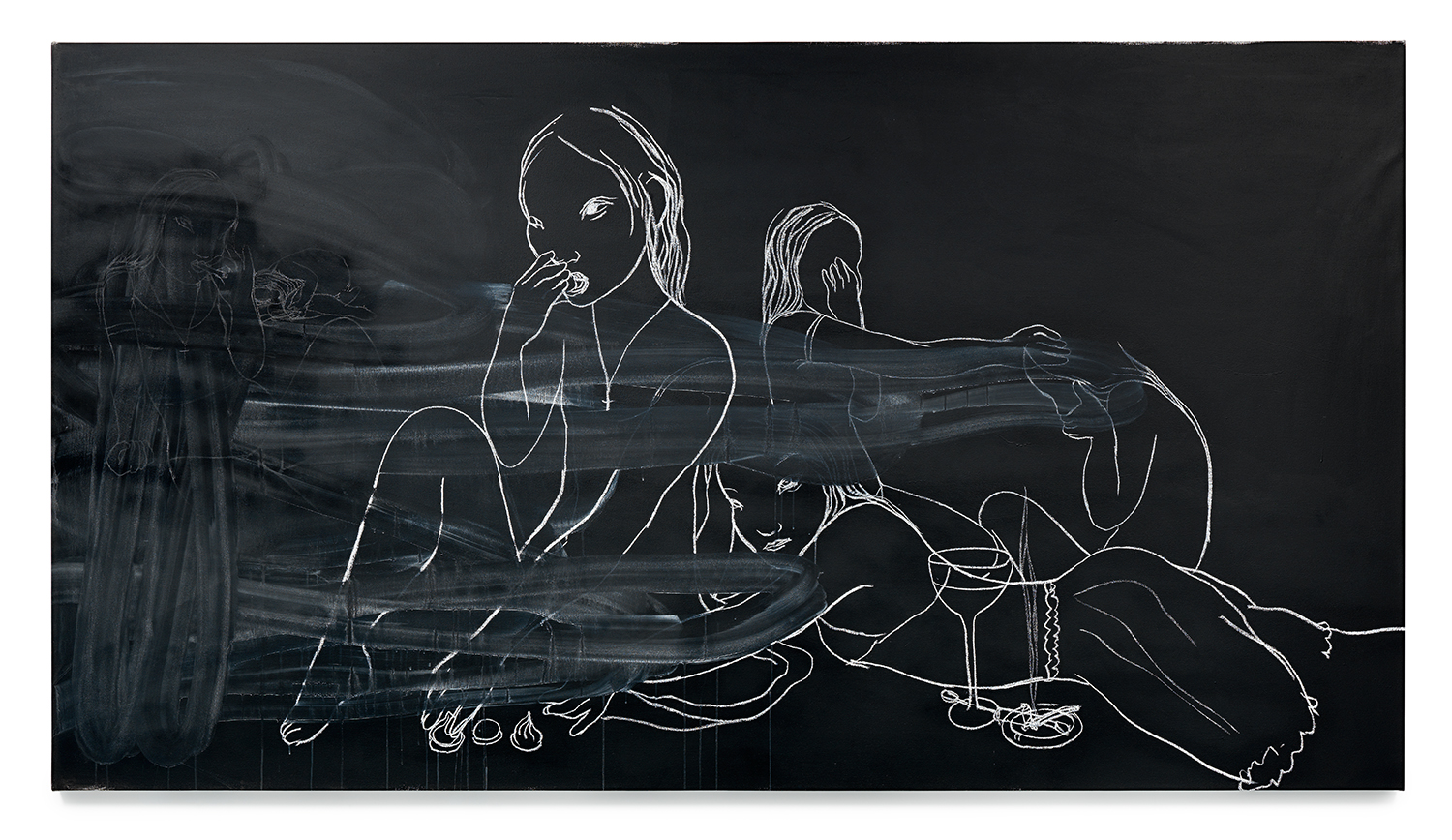 OLIVIER ZAHM — Why did you choose to use such a sensitive material as chalk for these works?
RITA ACKERMANN — Because it is fragile. Everything is fragile. Chalk isn’t meant to last and has no importance as a material. Its sole propose is to be erased after it has done the work.

OLIVIER ZAHM — Are the chalkboard paintings about disappearance, fading memories, time going by?
RITA ACKERMANN — Disappearance, yes — getting rid of something violently that I don’t want anyone to see. But by wiping it too hard, it becomes even more visible and curious looking. Those white or colored wash traces, with their tranquility, expose some lines underneath. It could be embarrassing. It makes a presence out of absence, and it could also be victorious. Being there by being missed. I don’t mean these ideas in a sentimental way, but more as a matter of fact.

OLIVIER ZAHM — Your paintings combine innocence and violence. Do you still believe in a utopian or optimistic future?
RITA ACKERMANN — You mean the kind of idealism of Hans Christian Andersen’s brutalizing fairy tales? Yes, I’m very into those moral tales that teach compassion and humility. La Fontaine’s animal stories were my favorite lessons about human stupidity before I could actually experience it happening to me in real life and was able to laugh about it. I don’t know if being idealistic is a belief or something that someone was born with. I can’t imagine not believing.

OLIVIER ZAHM — How do you choose your color palette? Black, red and pink, green…
RITA ACKERMANN — The chalkboard colors are only green and black. Like in school. The chalk is white, and then there are the colored chalks or pastels to draw on the boards and to be wiped away with water. I chose to limit the chalkboard to aim for absolute freedom in painting. I was curious what I would make out of this challenge. I’m still working on it.

OLIVIER ZAHM — How do you explain that your angelic heroines are coming back into your abstract practice of painting?
RITA ACKERMANN — I needed them for the chalk drawings because it is natural for me to erase my own drawings instead of someone else’s. 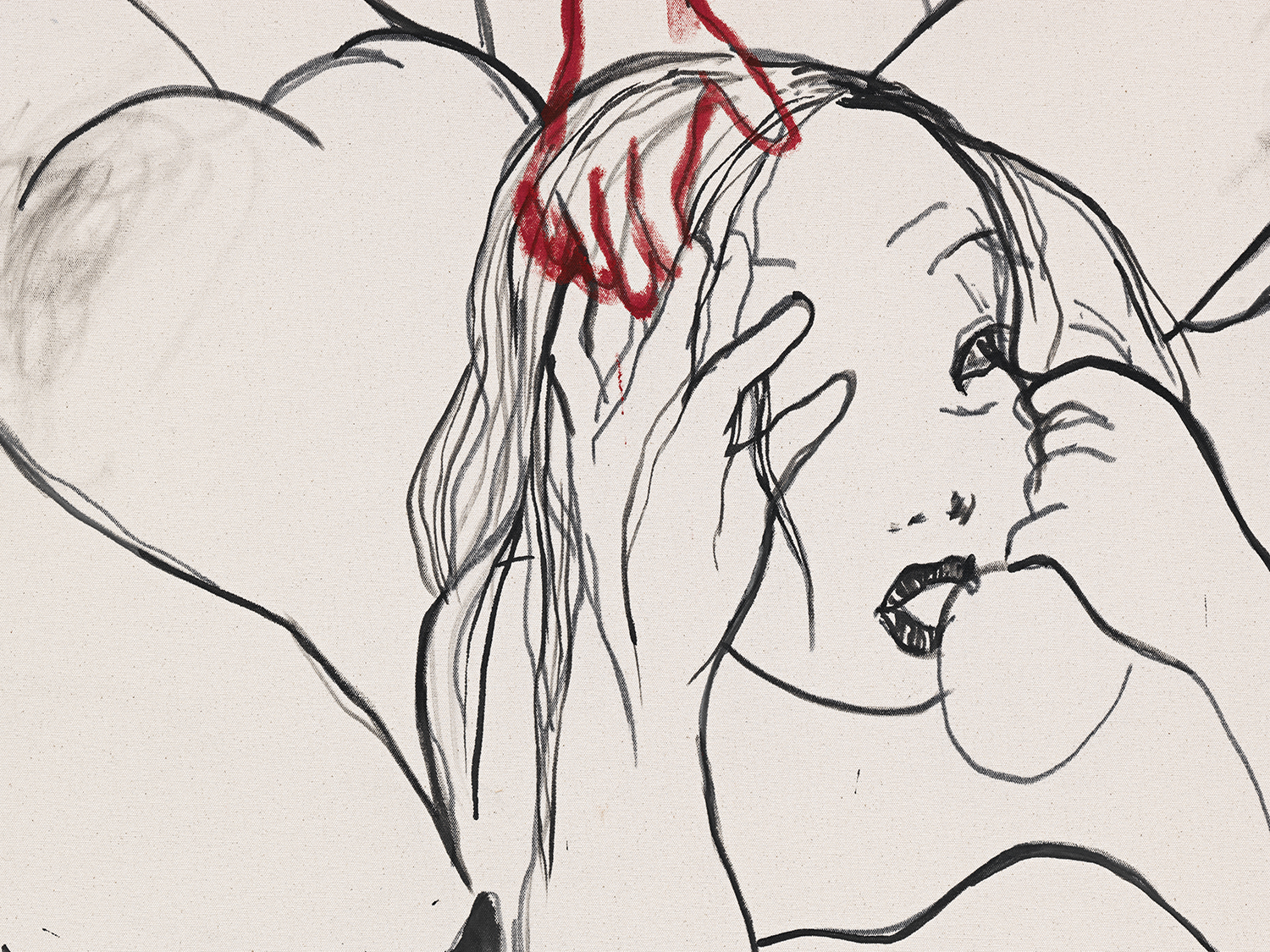 OLIVIER ZAHM — When do you consider that a work is finished, as the works always seem to be in a process of transformation?
RITA ACKERMANN — When I can’t touch the work anymore because there is nothing else to do on it. I have to be patient to be able see through it. Sometimes it takes a while to realize if it needs no more work, but the transformation of the works from one chapter to the next is a different situation. When a body of work comes to a conclusion, I burn out with its subject, and I can’t make another one. I have to move on to a new chapter with new excitement and ideas. Then later, in several months or years, I go back to older work with fresh energy — Basically it is a stray-cat style with multiple homes and wives, married to freedom.

OLIVIER ZAHM — Do you consider your work to be feminist? Or do you dissociate yourself from the evolution of this cause today, which is becoming more extremist and radical?
RITA ACKERMANN — The truth is, I don’t know too much about feminism or feminist art, and it never interested me. It is something I don’t understand, maybe because women and men were equal human resources under Communism, the system I was raised in in Hungary. There were other problems with society, of course. But works that utterly exist on gender or racial problems, or are inflated by those issues, have a sentiment that is hard for me to engage with.

OLIVIER ZAHM — Could you describe what is in the mind or in the dreams of your heroines today? Basically, what are they thinking about now compared with the ’90s’?
RITA ACKERMANN — Now they are just lines on a canvas. I’m detached from “heroines” as people. They could be numbers or mathematical configurations on the chalkboards, arranged and rearranged until they are solved and hold no more problem and are wiped away.

OLIVIER ZAHM — Everyone sees your heroines as a self-portrait. Is this partially true, or are they a more universal representation of a feminine psychology?
RITA ACKERMANN — It is a hard question to answer. I don’t have an explanation, even after the 20 years that I’ve been drawing this type of girl. Was Mickey Mouse a self-portrait of Walt Disney? It could have easily been; you never know 100% how he saw himself inside. I wasn’t drawing myself or illustrating my life or a fiction with them, but they kind of all look the same. Each drawing was a fixed scene from some kind of utopian realism in a young woman’s head. They were atmospheric. I see them now in an abstract way, contours of figures, arranged compositions in still lifes or landscapes. They are sexual; they are feminine, but my work has a very male side as well. Therefore I never believed in categorizing artists’ works by gender issues. In fact, what makes a work exciting is that those issues are played out within the work itself. 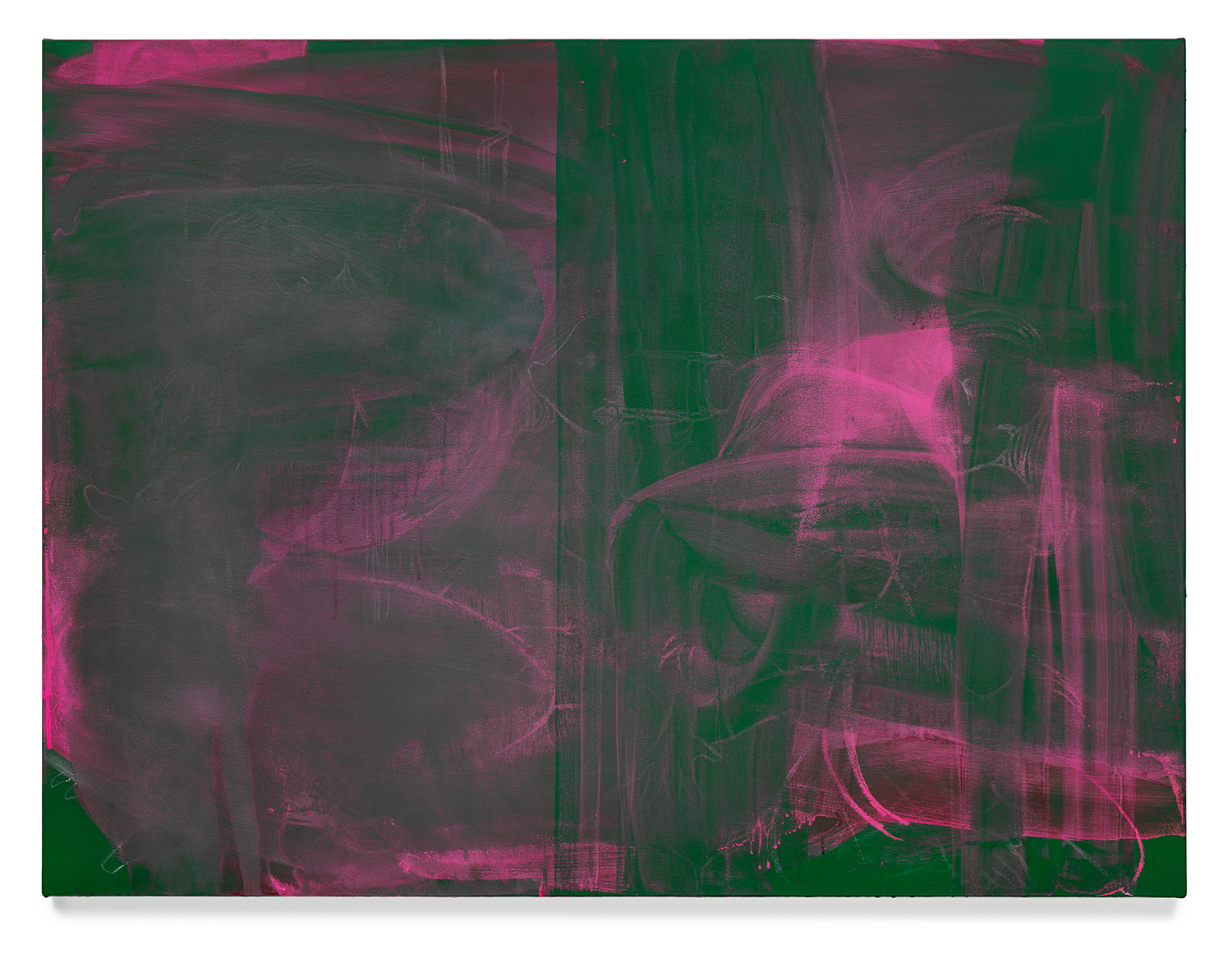 Pink Out, 2014, Acrylic, chalk, spray paint and pigment on canvas

OLIVIER ZAHM — You often refer to Cicciolina as one of your influences. Can you describe what you see in her?
RITA ACKERMANN — Well, indeed, I was curious about her as a phenomenon, the way she pushed herself forward in her career in different mediums and carved a completely unorthodox and unfamiliar path as a performance artist. I find her light-years more complex and imaginative than feminist performance art. Her act was never fueled from gender-based anger or social reference. An Eastern European’s desperation to prove herself in the West might have added gear to her inventiveness, but besides that she was a style genius who created a persona. The world has never seen anything like her before or after. She acted, sang, sucked dicks, posed in a poison-green secretary suit exposing her breasts with her voters. A director/actor of self-realized porn films, she emerged to be a candidate of the radical left in the Italian Parliament. She was at the very height of her career when Jeff Koons saw her performing one of her stage acts, and that was the turning point because she fell in love. She let Jeff Koons take over her art, so she could became a “normal woman.” After all, it is Jeff Koons who is influenced by Cicciolina, not me…

OLIVIER ZAHM — In a period when the market is dictating art values more and more, do you still believe in the avant-garde dream of art helping to transform life in general?
RITA ACKERMANN — Yes, I do. Otherwise I wouldn’t make art for the public. I believe every single work that leaves my studio will change someone’s world. You can call it utopian thinking, but I probably wouldn’t have survived all these years without it. It protects me from thinking of my work in the short term.

OLIVIER ZAHM — What are the past art movements that are still influencing you, and why?
RITA ACKERMANN — In art school, I looked at the Viennese Actionists and the Cobra movement. But nothing influences me anymore besides Michael Jackson’s fluid moves.

OLIVIER ZAHM — Who is the most important living artist in your view?
RITA ACKERMANN — It is hard to tell who is how important when they are still around. In New York, there are a few living legends at the moment. Dan Graham is one of them. His works over the years are a few of the highest contributions to modern art. But my most passionate admiration isn’t exactly for the fine-art heavy hitters… Number one is Paul Virilio, an architect and thinker. It gives me goosebumps how he first designed the most beautiful chapel, St. Bernadette, then wrote on speed as the ultimate power and predicted the informational bomb as the last bomb to be dropped on humanity, before it falls silent. And also, there is a Hungarian conductor, Iván Fischer. I was transformed when I first saw him perform.

OLIVIER ZAHM — How do you explain why art critics have always been quite speechless in front of your work? The critical community has never really been able to speak about it, despite your work being profoundly rooted in the history of abstraction and Expressionism?
RITA ACKERMANN — That fact will change with time. I have a unique path, too American for Europe, too European for America; too capitalist for the East, and too communist for the West. The work is self-referential; here I don’t mean myself, but the work as a self, and it has a perpetual nature with seemingly unexpected movements. Critics are very polite these days and mostly write positive things, and they only dare to say bad things when it is a “gang rape.” If they don’t understand what the artist is doing, they don’t write about it. Fair enough. It is hard to write columns if the artist’s work relies too much on its own inventions and requires deeper engagement to understand where it comes from. I make work to understand something that I don’t understand. How could I expect the critics to get my work before I do? I’m chasing my work, the work is chasing itself. It is a timing issue with critics. With writers, it is a different situation. They have more space and more time on their hands.

OLIVIER ZAHM — What would you say to a young painter arriving in New York today?
RITA ACKERMANN — Sounds like the biggest cliché, of course, but what I would say is try to be original, even if that doesn’t seem like the fast track to money and fame. Don’t be afraid to be different and to come up with new ideas in order to carve one’s own path. New York is dangerously generous with opportunities and connections, but it doesn’t support you for the long run if you don’t contribute something original.