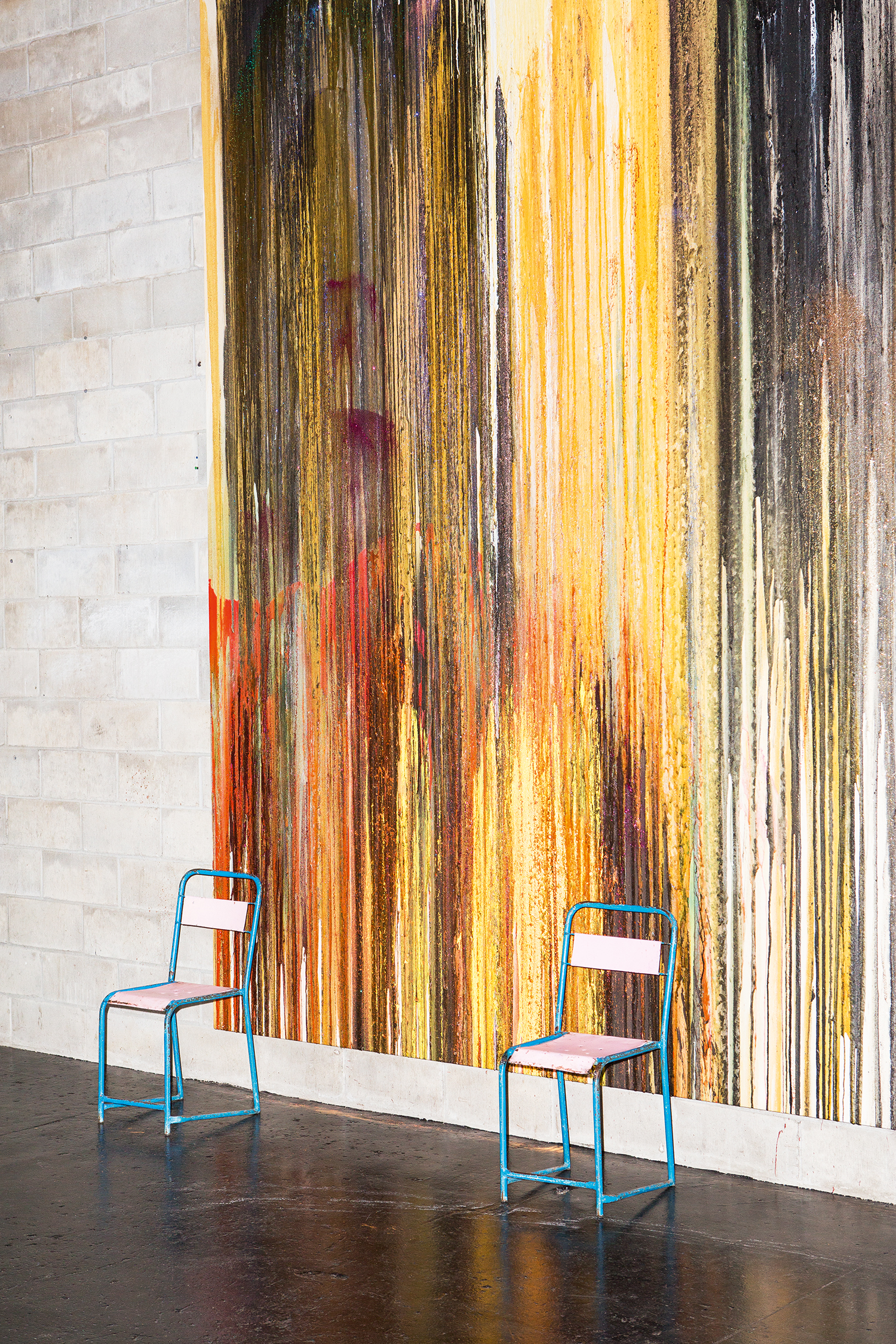 BILL POWERS — You recently had a show at Wade Guyton’s studio in Brooklyn. I wondered if, like him, you’re interested in new technology as a way to make art?
JOHN ARMLEDER — The only thing that really changes are the times. We’re just one more tool to activate those changes. Art is the collateral damage.

BILL POWERS — I loved the massive pour painting on the rear wall with four chairs parked in front of it. Can we talk about that?
JOHN ARMLEDER — I began making furniture sculpture a long time ago, in which the painting is elevated by its proximity to some domestic object. 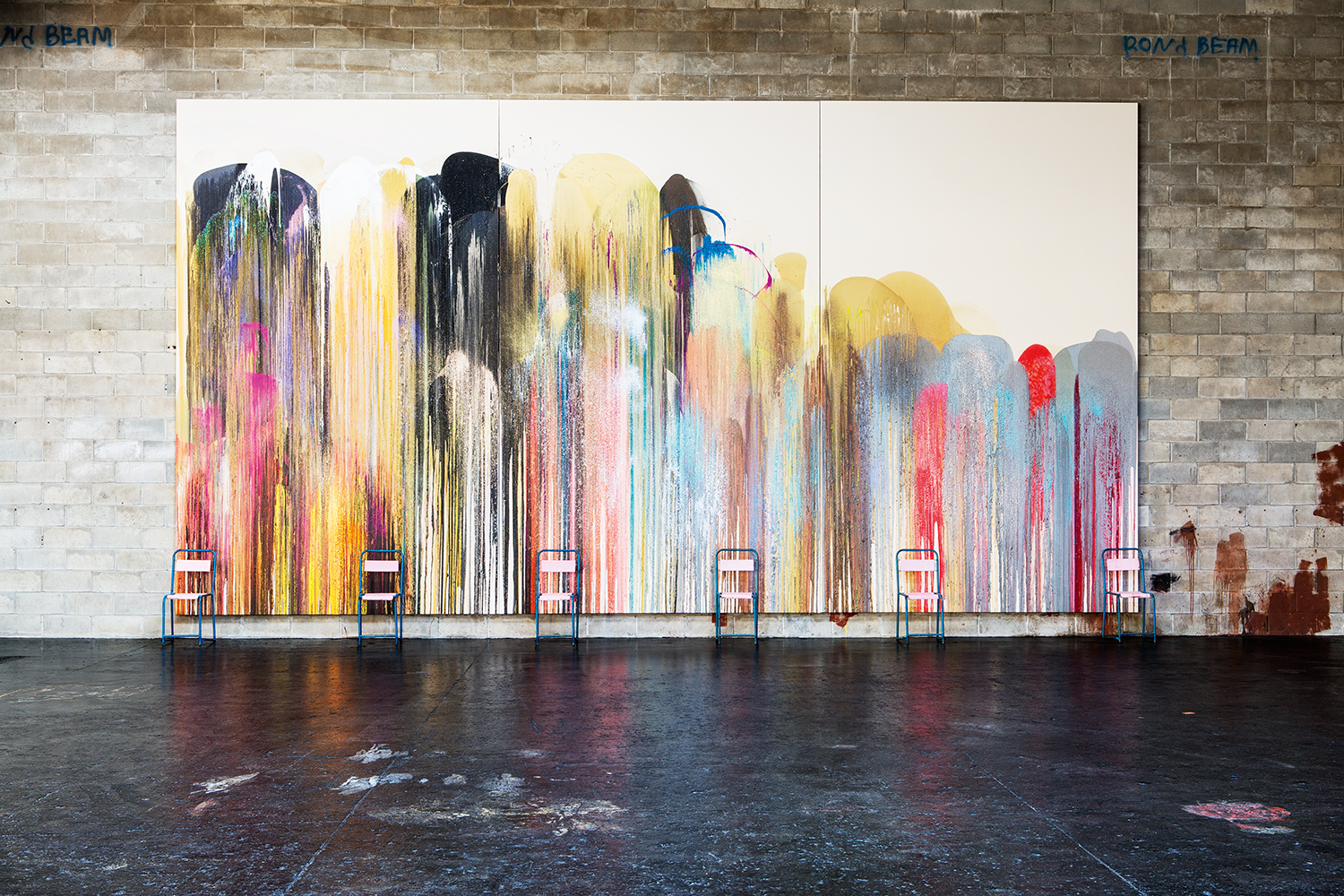 BILL POWERS — Yes, I saw the exhibition of your “Selected Furniture Sculptures” (1979-2012), at the Swiss Institute. You had surfboards and a bowling ball and a drum kit all paired up with different paintings. Do the objects you chose to include reflect your interests outside of art?
JOHN ARMLEDER — Well, inasmuch as I have an interest in cultural territory and the shorthand connected to it. For instance, I’ve always been fascinated by the electric guitar because it has the shape of an acoustic guitar, but there’s no formal or practical need for that body shape, only to identify the instrument. Now someone else might view the same electric guitar and think of Picasso or Braque’s Cubist works as a reference point. All those layers are interesting as signification.

BILL POWERS — What was your initial impulse to make furniture sculpture?
JOHN ARMLEDER — Do you know the French composer Erik Satie, who created what he called furniture music? In a way, it was the precedent for ambient music. He would have musicians in different rooms playing the same simple three-chord piece again and again. He didn’t want people to actually listen to the music, only to hear it. I always thought that distinction could apply to art as well: art can either be seen or looked at. 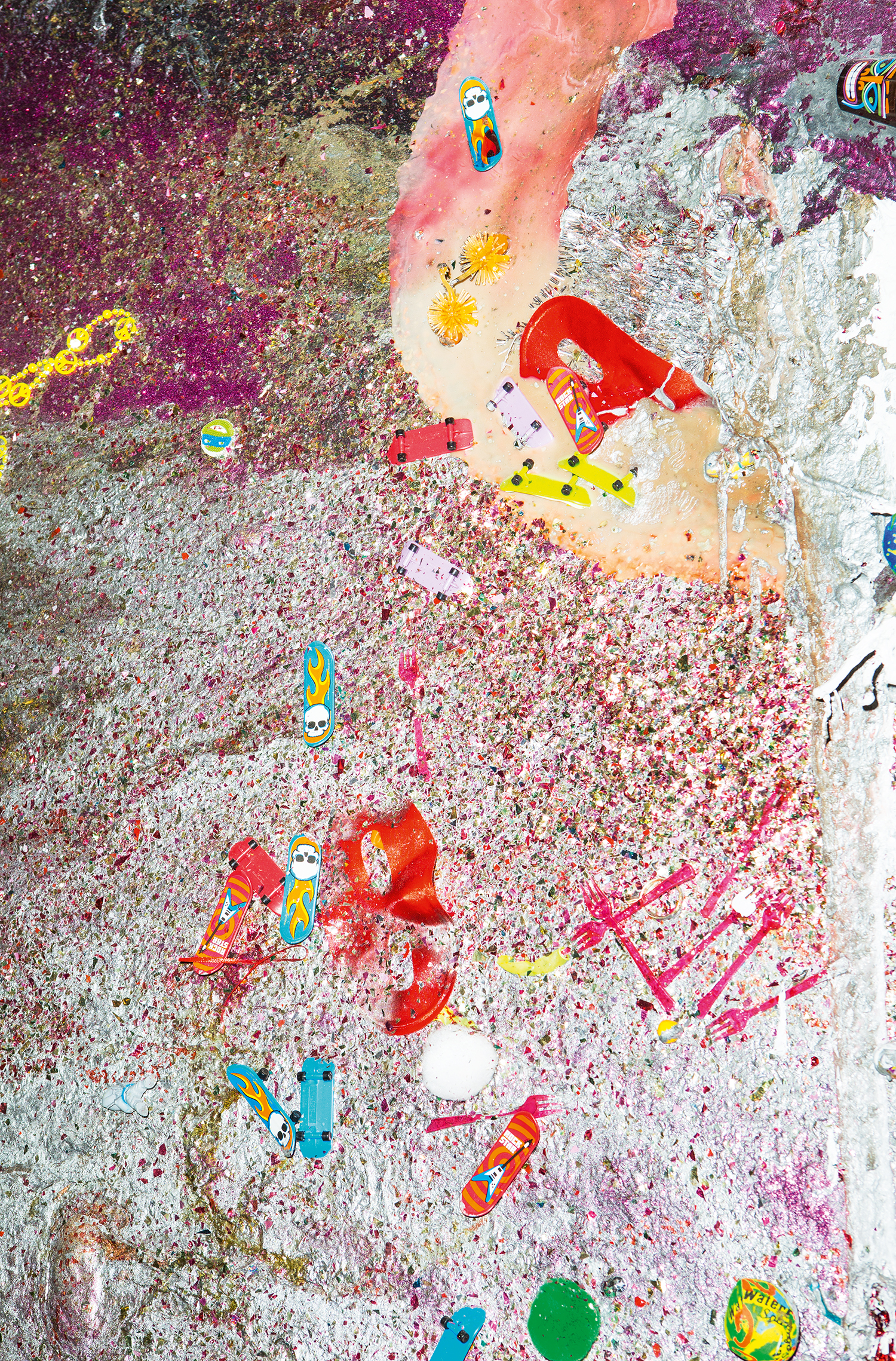 BILL POWERS — Do you remember in the late 1980s when you exhibiteda broken chandelier on the floor at the John Gibson Gallery?
JOHN ARMLEDER — It was actually three crystal chandeliers brought together limp on the floor. They weren’t broken. It was to give the feeling that they had been dumped or were waiting to be hung. It’s really up to the viewer to decide.

BILL POWERS — When you think of those days, does it make you nostalgic for the old New York art scene?
JOHN ARMLEDER — No, things only get better over time. I’m wholly against the nostalgic idea. The art world was so small then, and insular. You knew everything that was happening. Today, you have endless layers of activation in culture, and it’s much more challenging and exciting.

BILL POWERS — Do you ever worry about the toxicity of the art materials you use? Perhaps in the same way that Sigmar Polke damaged his health developing film with uranium.
JOHN ARMLEDER — When you cross the street, you also put your health at risk. It’s true, though, that compared to, say, Larry Poons, who used acrylic paint to make his pour paintings, mine involved way more toxic fumes. You know, I had a tumor, so the doctors gave me an MRI, and on the scans my neurologist found all this strange imagery from my brain.

BILL POWERS — Olivier Mosset says that you’ve always been a bit of a dandy. Do you accept that description?
JOHN ARMLEDER — If you look at me today, you’d wonder where the dandy thing went. The dandy idea historically is more of a conceptual situation than a fashion. I don’t know who I am, and, in fact, I don’t really care. Whatever people say about me, there’s something true about it.

BILL POWERS — Are you mildly obsessed with Christmas decorations?
JOHN ARMLEDER — I’m into the phenomenon of cultural crossovers. Look at Hawaiian music, and the origin of the ukulele. Or how the Hawaiians had a tendency to play guitar on their lap almost like Japanese koto music, and they played it with a wooden stick, which gave way to the slide guitar. In the first part of the 20th century, Hawaiian music became quite popular and traveled all over the world. I like the consequences of that back and forth, how different cultures mutated the compositions and the genre itself.

BILL POWERS — So how does this relate to Santa Claus?
JOHN ARMLEDER — Christmas is exported to so many countries among people who know very little about the religious component, and by using ornaments that have strictly nothing to do with the birth of Jesus Christ. Santa Claus was part of a pagan celebration in Europe, and he turned into a sort of spokesman for the holiday. It’s a complete construct. When I was together with Sylvie Fleury, we had a record label, Villa Magica, and we invited artists to come make Christmas albums. The label is still active, mostly managed by my son, Stéphane.

BILL POWERS — Is it true that your favorite animal is the Tasmanian devil?
JOHN ARMLEDER — I always had a big fantasy for them. I went to Australia years ago, but I never made it to Tasmania, so I didn’t get to see one in the wild. Now the devils are an endangered species. 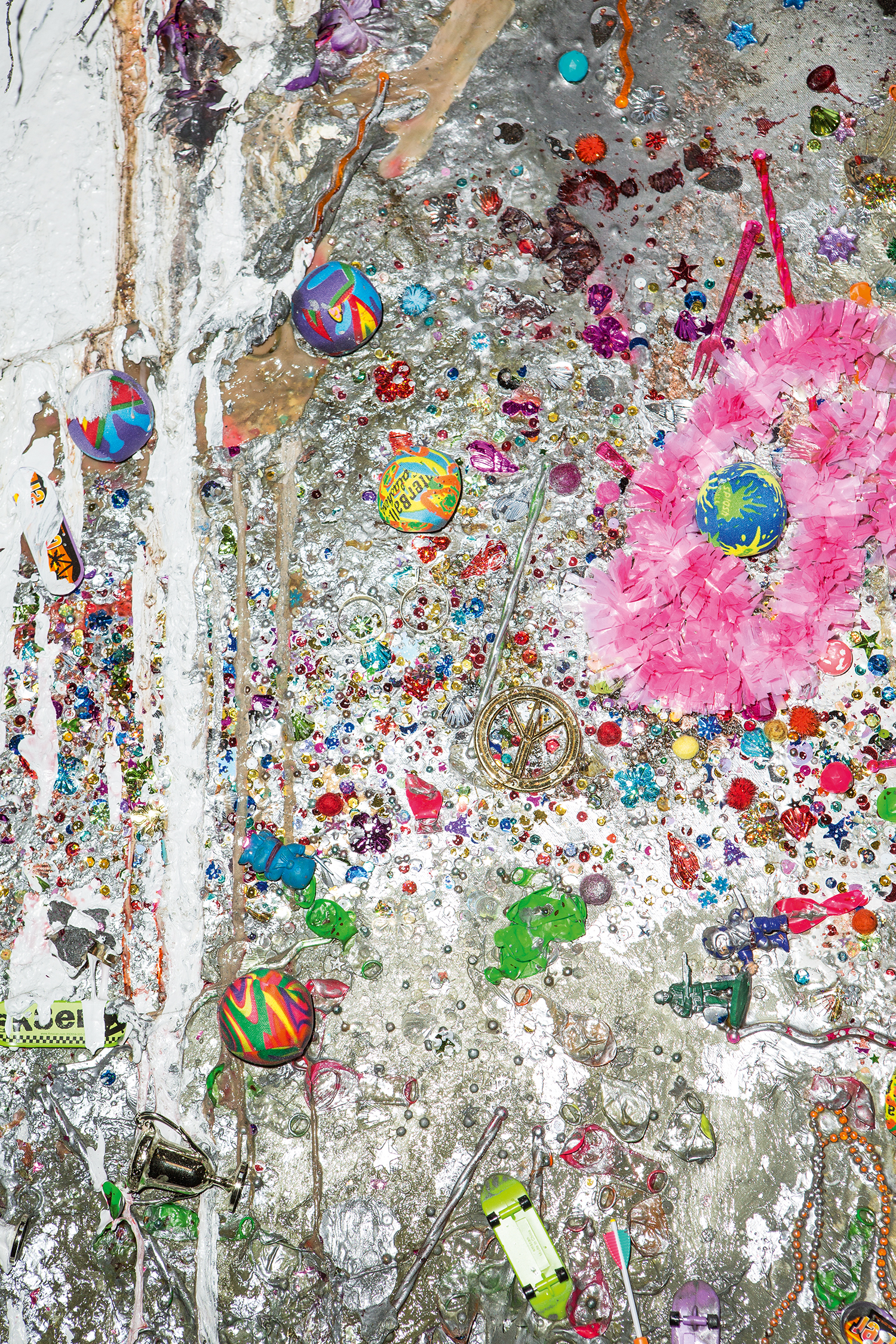 BILL POWERS — Are there any new projects on the horizon we should discuss?
JOHN ARMLEDER — I’m doing a double show in May at The Andy Warhol Museum in Pittsburgh: there will be works of mine and a second show of mostly abstract Warhol paintings selected by me.

BILL POWERS — Do you have a favorite series by him?
JOHN ARMLEDER — I love the shadow paintings. I think they’re fantastic.

BILL POWERS — Did you know Andy?
JOHN ARMLEDER — I met him often. He came to Geneva from time to time. You know, I used to have a gallery in the ’70s, right? One of the last shows we did was with the early books of Andy Warhol. He got so excited and started signing everything with a big felt tip pen, which basically destroys the books because the acid in the marker eats through the paper. It was very funny.

BILL POWERS — When you are making art, is it for eternity or just for today?
JOHN ARMLEDER — Whatever you do is for eternity. When you exhale, it is a breath that is given forever. You can’t take it away. But I’m not concerned with where my art ends up. The only meaning it has to me is while I’m doing it. 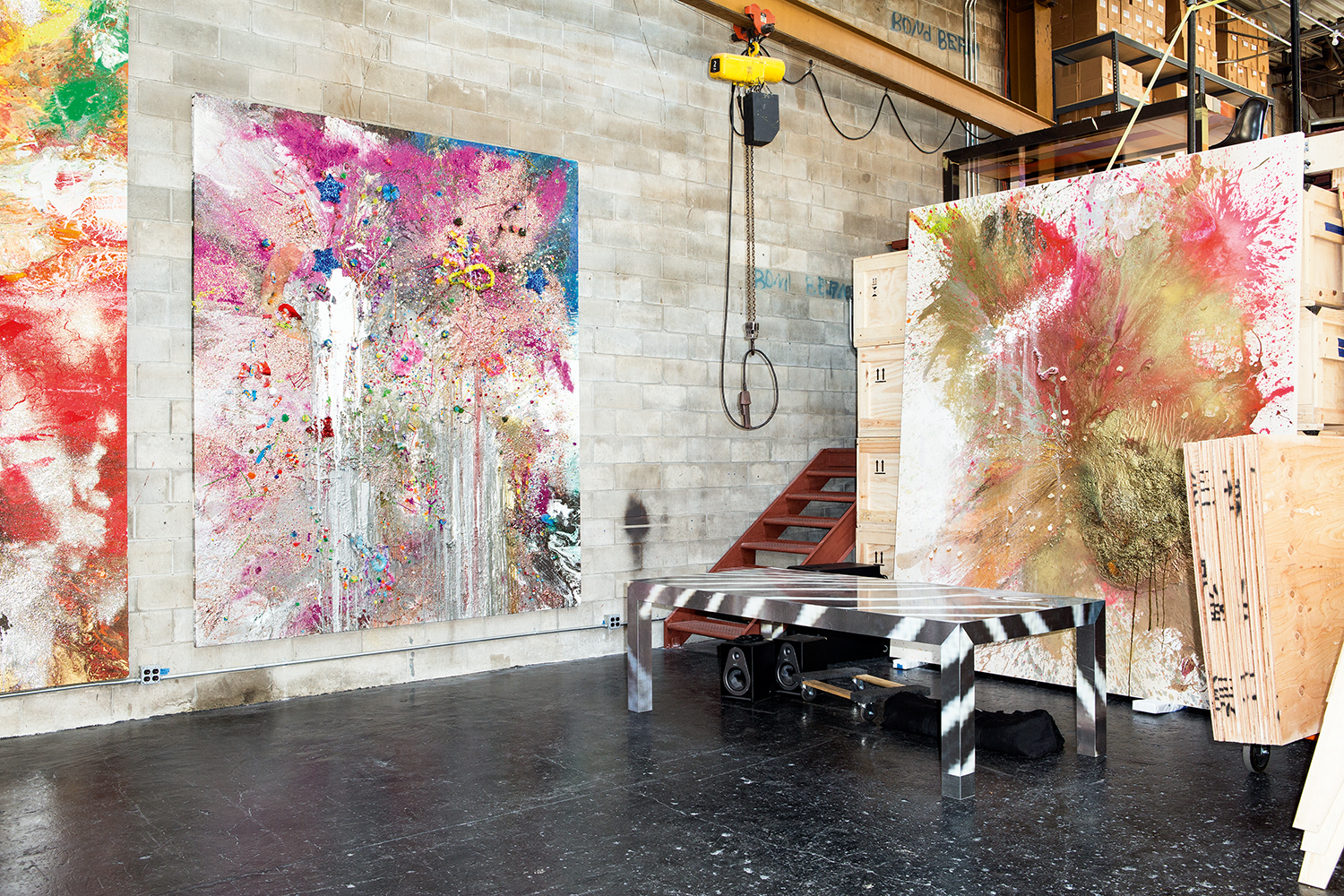 BILL POWERS — When you’re visiting New York, how do you enjoy spending time?
JOHN ARMLEDER — With friends. I’m slower than I used to be because of my health situation. If Olivier Mosset isn’t around, then I’ll visit with John Tremblay or Blair Thurman. Also, New York is heaven for just walking around.

BILL POWERS — Blair Thurman says that you can tell whether a painting is great because, if you’re very quiet, you should be able to hear a little Led Zeppelin coming out of it. What is your litmus test?
JOHN ARMLEDER — When I was a kid, my mother used to travel us around Europe to go to churches and museums, so we’d see a lot of art. But she took a very liberal approach. She wouldn’t force us to look at any one piece in particular. Probably when I was four years old, we went to Florence, and I saw a Fra Angelico. My vision got blurry in front of this painting, and I realized I was crying.