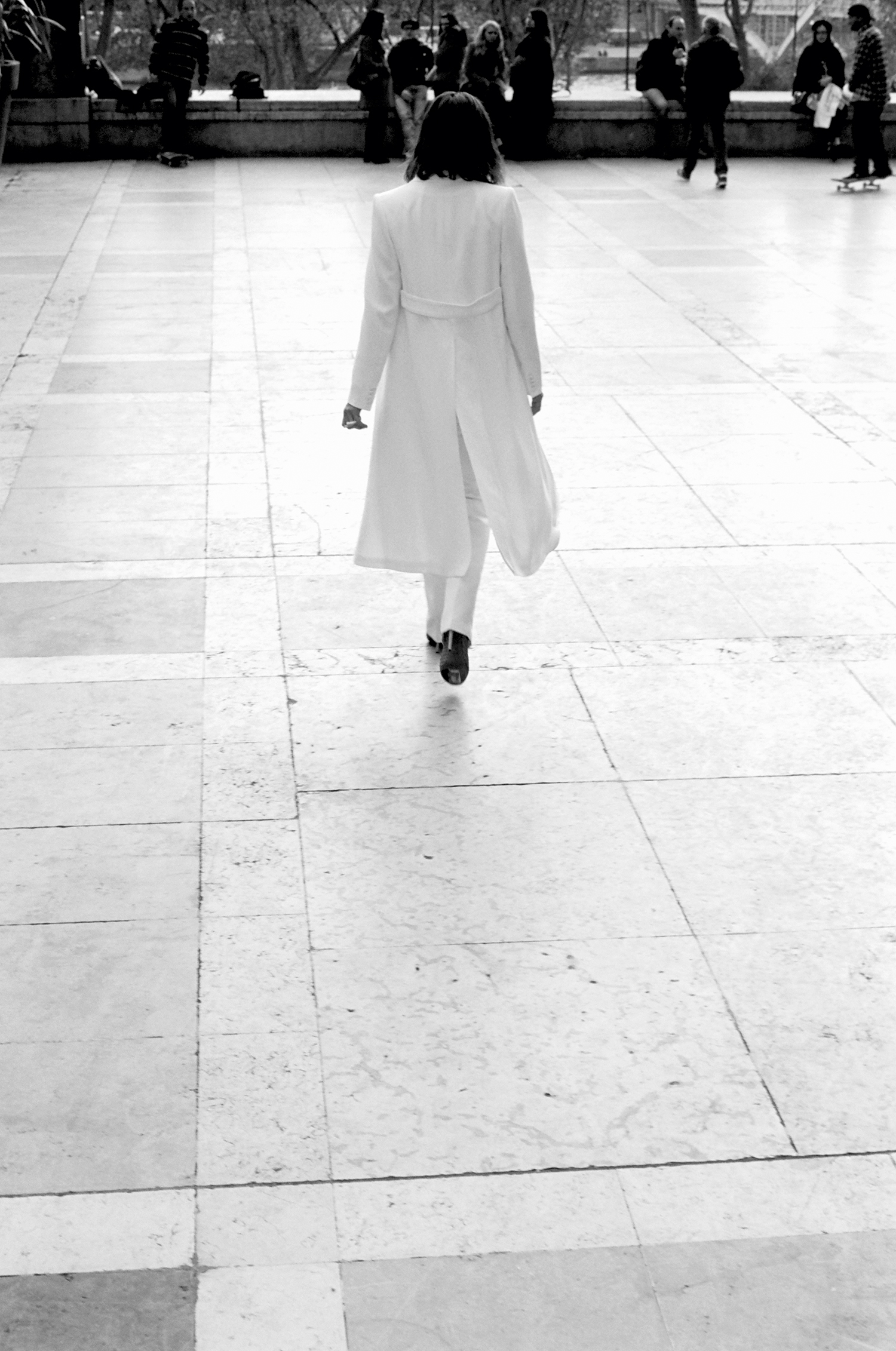 Allegria Torassa is a 33-year-old Franco-English fashion designer and co-founder of the Cicciolina party. This is her second season designing tuxedos for the historic French atelier Pallas, which is renowned for its work on suit pieces for French fashion houses including Karl Lagerfeld and Balenciaga at the time of Nicolas Ghesquière.

CAROLINE GAIMARI — When did you first meet Daniel Bousquet and Véronique Pallas from Pallas?
ALLEGRIA TORASSA — I met them while I was working at Balenciaga with Nicolas Ghesquière; whenever we needed to make a really smart jacket, we would call Pallas. Of course, the studio at Balenciaga was really strong, but we would sometimes call on Pallas to rework a drawing and pattern when we needed a very meticulous hand on a shoulder. We were really confident when we worked with them.

CAROLINE GAIMARI — And they thought of you when they launched their own line?
ALLEGRIA TORASSA — Well, with all the experience of the atelier, they started slowly to create their own simple tuxedos for women in black and white. They started to have some interest from the press and from clients, but they needed a designer — as they are artisans, not designers. They launched the first seasons in collaboration with the stylist Vanessa Traina, the model Hannelore Knuts, and Violetta Sanchez. And then they called me in a friendly way. Of course, since they are a small, family-run company, they weren’t offering the same advantages as a huge brand in terms of resources and teams. But I thought about it, and I wanted to do it. They are craftsmen, and they needed my help; it just felt right. It was all super-relaxed. The first thing we did together was a suit in collaboration with Aymeline Valade for the red carpet at the Festival de Cannes, for Bertrand Bonello’s movie Saint Laurent.

CAROLINE GAIMARI — What was your inspiration for her look?
ALLEGRIA TORASSA — She needed something simple, not tacky, and a respectful nod to Mr. Saint Laurent, as she was incarnating his muse Betty Catroux. So we thought, “Aymeline is a skater and she personally likes to dress in a relaxed, comfortable way, so a suit from an atelier seemed perfect, with flat shoes.” By being more discreet, she was able to stand out more. It worked! After that, there was more press and interest in the brand. That was kind of a starting point to develop the collection, and the sales went really well.

CAROLINE GAIMARI — After working at Balenciaga, you co-founded the Cicciolina party. It’s interesting that you combined this role with your design role.
ALLEGRIA TORASSA — It’s funny how much people like to put a label on things! After I finished at Balenciaga, people kept asking, “So now you are organizing parties?” But it’s just four a year, so that’s not my daily life — that takes up very little of my time! That’s not what I “do,” guys! People proposed that my partner on Cicciolina — the stylist Niki Pauls — and I bring the party to different cities and make them more frequent, but we say no because our goal is not to become party girls. We just do it because it feels right, and it’s fun. For this first season at Pallas, we announced it as “Cicciolina collaborates with Pallas” because we thought it was a nice contrast to combine these two universes: the Cicciolina world — two girls doing an underground, edgy party — and Véronique and Daniel, this couple that makes traditional tuxedos. On paper it doesn’t make sense, but in reality our spirit nourishes them, and I feel like they nourish us as well. It’s actually the perfect combination of projects to work on. 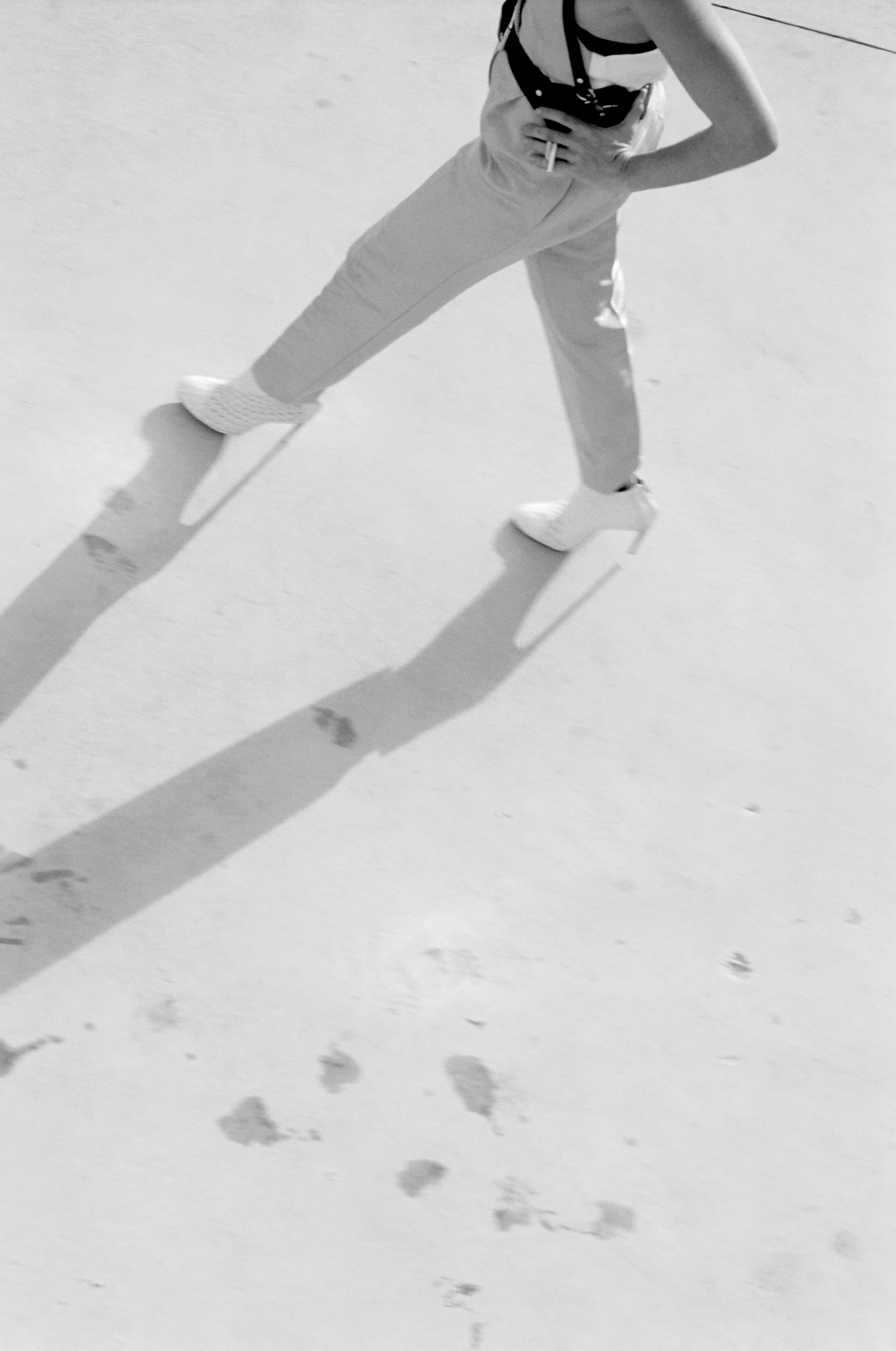 CAROLINE GAIMARI — How has this collaboration with Pallas evolved?
ALLEGRIA TORASSA — We did one season together, as a one-shot to help them out. But it worked so well that they asked me to continue, and I accepted for another season. It’s so natural, and we get along so well. It feels like a family. It’s different from my previous experiences, working in a huge studio, where the roles are really distinguished between everyone. At Pallas, we’re all doing a bit of everything. Niki joined me as a consultant, helping to define the style and working on the direction of the photo shoots. We will take it season-by-season, one step at a time, which is good because it leaves me freedom to do my other projects.

CAROLINE GAIMARI — What else are you working on?
ALLEGRIA TORASSA — I love to do as many things as possible all at once. I don’t want to be only fashion. I’m working on a personal writing project: a collection of memories of my recent experiences, trying to put them all together to make one block, focusing on moments and atmospheres. That’s why I am doing Cicciolina and trying to push that further and continuing to collaborate in different ways with other people as often as I can. But for fashion, even when a nice position comes my way, I usually don’t even go to the first meeting because I know how it can be to work with a big team in a studio. I’ve already lived it in such a nice way with Nicolas and the team at Balenciaga. So I’m happy to stop that for a moment and work freelance, coming in and out of projects.

CAROLINE GAIMARI — How do you approach the tuxedo?
ALLEGRIA TORASSA — Before I started collaborating with them, Pallas was approaching the tuxedo in a really classic way. Black. White. Satin. Crepe. So it felt like you could only wear it for one occasion, not just to pop it on to leave your house in the morning. My goal is not to try to revolutionize the “future to fashion.” It’s about working on staple pieces and helping to bring those standards into everyone’s wardrobes. We made pants, jackets, and simple crepe tops to wear underneath. I tried to bring more lightness and irreverence to it, to lighten the shoulders, to make the fabrics less heavy, so that each piece can be super chic and classic at night or with Adidas on the street. I think it’s the right time for tuxedo and suit styles. I feel really comfortable wearing it and mixing-and-matching the pieces with anything from a soft turtleneck to a grungy t-shirt!

CAROLINE GAIMARI — I think the easy elegance of a suit is fantastic, but quite difficult to pull off for the average woman. It’s more challenging than a dress or jeans.
ALLEGRIA TORASSA — It’s true that somehow it just disappeared from the everyday wardrobe. Often suits are too stiff or strict, or too obviously for eveningwear or a formal meeting. I want to feel sexy, chic, and comfortable. I don’t want to feel sweaty or restricted, constantly thinking of the moment I get home and can finally take it off. So, I try to think about all women when I’m imagining the collection: a young girl wearing the suit with Stan Smiths, but also her mom wearing it in a more elegant way. For the first collection I’ve made with Pallas, I’m super happy to keep my suit on, to cook with it, to run out to the market. I was wearing it the other day with a leather corset. I really want the suits to be versatile for all situations, adaptable to one’s own personal style — whether it’s with a silk shirt or a super hot bra, with heels or with sneakers.

CAROLINE GAIMARI — This must be quite a challenge at a small studio.
ALLEGRIA TORASSA — We’re doing all the jobs of a big studio, but it’s just us. The trickiest thing in this position is the fabrics, coming from a major brand where there is so much attention to researching and developing fabrics. At Pallas, they didn’t have this know-how. They were really using the same two fabrics again and again. So, we have to stay simple, to keep our ideas manageable and feasible. But it works with this classic style. The long-term goal is to be able to grow so that we can concentrate on pushing the fabrics and detailing further. For now, the main focus is a nice cut, to make girls look flattered and chic. 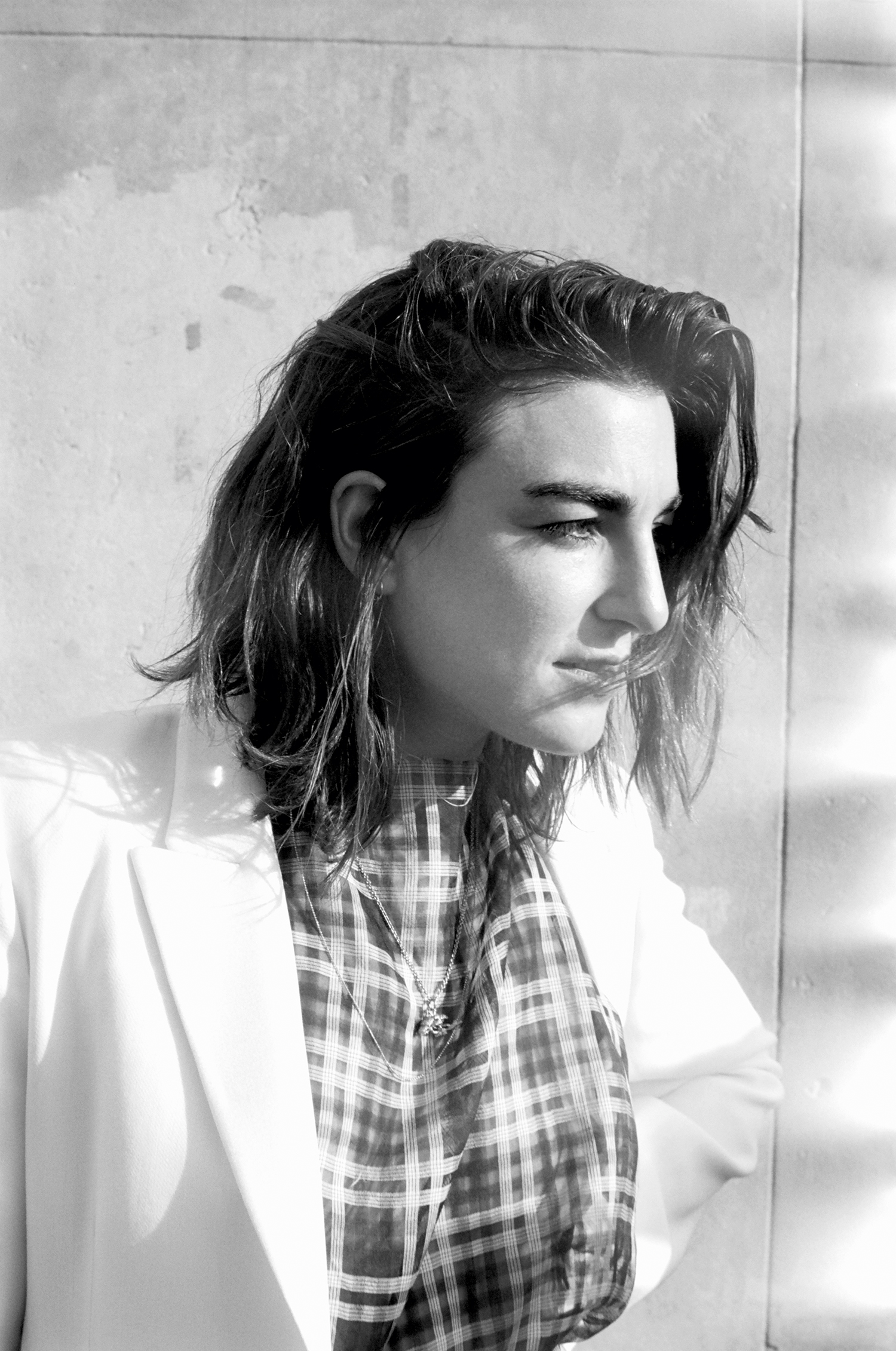 CAROLINE GAIMARI — So the tuxedo should be flattering for all occasions — do you still consider that it can be formal wear?
ALLEGRIA TORASSA — Of course, that’s also my dream. When I see a red carpet for the Met Ball, the Oscars, or the Festival de Cannes, I find it almost shocking. There is so much effort, and I see those beautiful, talented women, and they are wearing poufy dresses that don’t really feel like “them.” The typical red carpet silhouettes today don’t seem to represent the woman wearing them. They feel more like something that she borrowed, that isn’t her own. I would really love to do more Pallas tuxedos for the red carpet, something really chic, like a tuxedo with an open back, or sexy overalls. Something you can wear and feel like a powerful, sexy woman. I would love it if the celebrities on those red carpets could feel more like themselves and less constrained, just waiting for the moment at the end of the night when they can take it off. But because it’s been out of fashion for a while, I think it’s still hard for women to project themselves in that look.

CAROLINE GAIMARI — Can you still feel feminine in a tuxedo?
ALLEGRIA TORASSA — For sure! I have much more space to act like a woman in a tuxedo. You can open your legs when you’re sitting! It doesn’t feel vulgar or inappropriate in a tuxedo. When you wear a dress, that is an immediate, obvious expression of “womanhood.” There isn’t space to let that develop naturally. Don’t get me wrong. I love dresses, too, but I feel like if you start being really charming and all that in a dress, it can be too much. And I’m a flirt, so the tuxedo leaves the space for that womanhood to creep in subtly. I get to tell you and make you sense that I’m a woman, not just show you in an obvious way. Let’s put it this way: there are two girls that walk into a party, one in a slinky, tight dress and one in a tuxedo. The one in the obvious full feminine look — the dress, the mascara, the foundation, the heels, she’s going to be smiling — but may be stiff because the dress is too restrictive, and she is the one complaining to her girlfriend in the bathroom. The one in the tuxedo can forget about those restrictions and pay attention to her comfort, her ease, her body language, her attitude, and look people in the eye. The girl in the dress walks in, and immediately you are attracted to her, in a first-degree way. That fades away quickly. The woman who walks in with a tuxedo, you don’t see her straightaway, but she grabs all the attention with her natural attitude that comes out; she has more room to be coy and playful. That’s the woman you go home with!