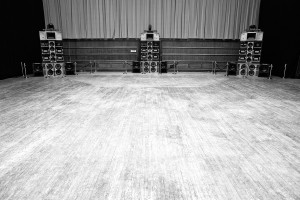 ANNABEL FERNANDES — How did you come up with the idea for Despacio?
DAVID DEWAELE — Well, initially the plan was to do a weekly residency in Ibiza. We would mix all night long, just the three of us without any support DJs, for a small crowd, playing the tracks we can’t really play in front of big crowds, off vinyl, and usually slowed down (hence the name Despacio). It was kind of the exact opposite of the Ibiza we usually play, where the big clubs spend lots of money on pyrotechnics, light shows, superstar DJs, and fancy sound systems that are super-expensive but, to us, sound over-compressed. So when we found someone who was interested in doing this, we said we could only really make this happen if it’s combined with an amazing sound system. Otherwise, there is no point. Unfortunately, the Ibiza residency fell through, but then luckily we got approached by the Manchester International Festival, and through the sheer madness of everyone involved on every level with Despacio — it’s a money-losing venture that is fueled only by enthusiasm — we’ve been doing Despacio nights sporadically here and there since.

ANNABEL FERNANDES — Can you briefly take us through the different components of the sound system? How does it work?
DAVID DEWAELE — There are seven stacks situated in an oval with three on each side playing left and right, respectively, and a mono stack situated opposite the DJ booth. This happens to be sort of hidden, as we want the music and the system to be the stars of the night, not the DJs. The alignment is done physically, and the amps are built into the stacks. Depending on the venue and the setup, there are several sweet spots located throughout the dance floor area. But of course the one right in the middle underneath the strobe light, where you get literally hit from all sides, is the one that everyone gravitates toward. That makes for a welcome change, as no one is facing the DJ booth, or even looking at us; they just want to be dancing in the middle.

ANNABEL FERNANDES — Why are you using only vinyl?
DAVID DEWAELE — Simply because, to us, it’s the best-sounding carrier of music. We have thousands of them to choose from, and they look great. It’s just one more thing to nerd out over. Between the three of us, we bring about 1,000 vinyls to choose from, and lots of them are edits that we have made and have pressed up especially for Despacio.

ANNABEL FERNANDES — How did you come to work with McIntosh?
DAVID DEWAELE — Among James, Steph, and me, we already owned and were using a number of McIntosh amps in our homes and studios. We love the sound of them so much. That, combined with the fact that they look amazing, made them an obvious choice to contact when creating this system. We thought they would refuse, but it proves that they are as insane as we are, since they supplied us with all the amps. Apparently they have been involved in only three systems like this. The first was the PA system for Woodstock; second was the Wall of Sound (travelling PA for the Grateful Dead in the ’70s), and now this, and it is by far the loudest one.

ANNABEL FERNANDES — Does Despacio use vintage amplifiers, or did you create something new?
DAVID DEWAELE — The system is like a perfect marriage of old and new. I assume McIntosh didn’t want to promote a line that they couldn’t sell anymore, so the amps are all new ones, but let’s say the ethos of the sound system is vintage, as in it is an analog disco sound system reminiscent of what used to be the norm in clubs, only taken to the max.

ANNABEL FERNANDES — The towering 11-foot Despacio sound systems look like sonic sculptures. Could you describe the setup of the installation?
DAVID DEWAELE — In terms of numbers, it is basically a 20,000-kilo system (30,000 with cases) containing 60,000 watts of volume for a capacity of about 900-1,200 people. It is an insane amount of volume, but we never run the system to the max because it would make people’s ears bleed. We run it at a decent level, and the beauty of the system is that we have all this headroom to bring out the quality of the original vinyl recording (and pressing) of the vinyl in such a way that even though it is really, really, really loud, and you feel the music hitting you on all levels, it is not uncomfortable. In fact, you can perfectly have a conversation with your friends on the dance floor.

ANNABEL FERNANDES — It’s stated that the Despacio is intended to preserve the “tradition of pure live music performances.” What do you want people to feel?
DAVID DEWAELE — What we are trying to do is exactly what you just described: we want people to “feel.” This is our attempt at putting on the sort of party we’d like to go to ourselves, where (obviously) the music is paramount, and where it can be paramount only because all the other factors are thought out in detail, like the sound system and the dance floor and the lighting and the wine and the coffee and the snacks and the way the venue looks and the capacity and the amount of space people have to actually move around.

ANNABEL FERNANDES — What have you learned in the first year since Despacio made its debut in Manchester? Were there modifications that you felt were necessary?
DAVID DEWAELE — We are so lucky with our crew in that they are as passionate about the whole project as we are, and every time we get to do a Despacio, it gets even better because we all start to know what works where and what doesn’t.

ANNABEL FERNANDES — What has the response been from the attendees of the club nights? Have they noticed a difference?
DAVID DEWAELE — People’s responses have been insane. We have a following of avid fans that seems to be growing and growing and connecting people on a level that is even better than we could have ever dreamed.