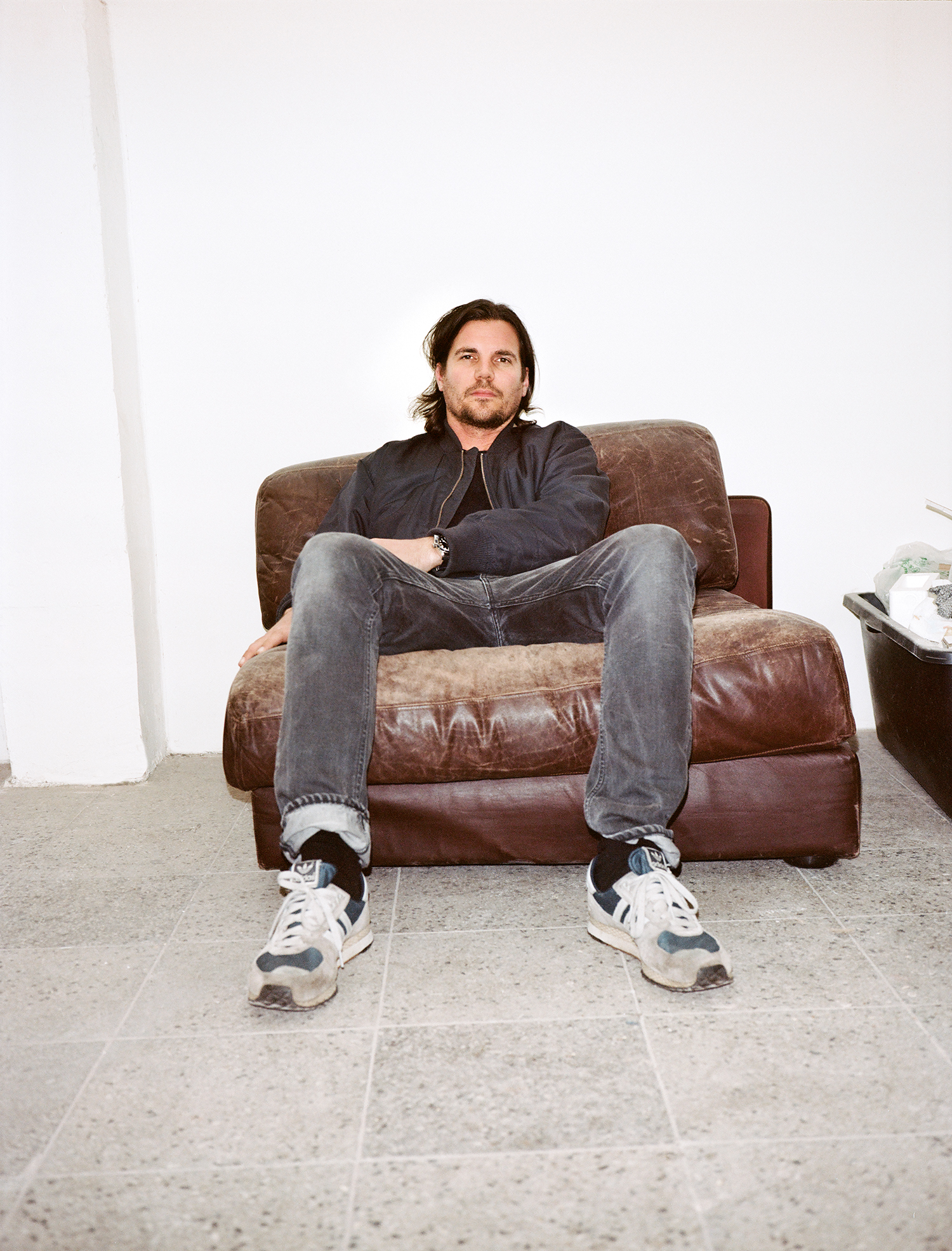 Michael Sailstorfer’s art is accessible. Whether it’s a machine that fills the room with popcorn, a tree exploding out of the ground 10 meters into the air, or a spacious room full of artificial clouds made from inflated car tire tubes, his art pulls you in from the moment you experience it — and not just visually. Sailstorfer lives and works in Berlin.

SVEN SCHUMANN — Why does nature play such an important role in your art?
MICHAEL SAILSTORFER — I grew up on a farm in the Bavarian countryside and just started out using what I was surrounded with. As a kid, I would go to the forest, see what was lying around there, and start to build things, like a shed or a bunker or weapons. That’s how I grew up. I showed my first installations in nature, too, because I wasn’t able to do exhibitions in galleries and museums as an art student. For example, one of my first pieces was called Forest Cleaning. It’s a minimal sculpture, an artificial cube that I made just by cleaning the ground and the trees. It was actually very simple to make a sculpture by taking material away instead of making something new. 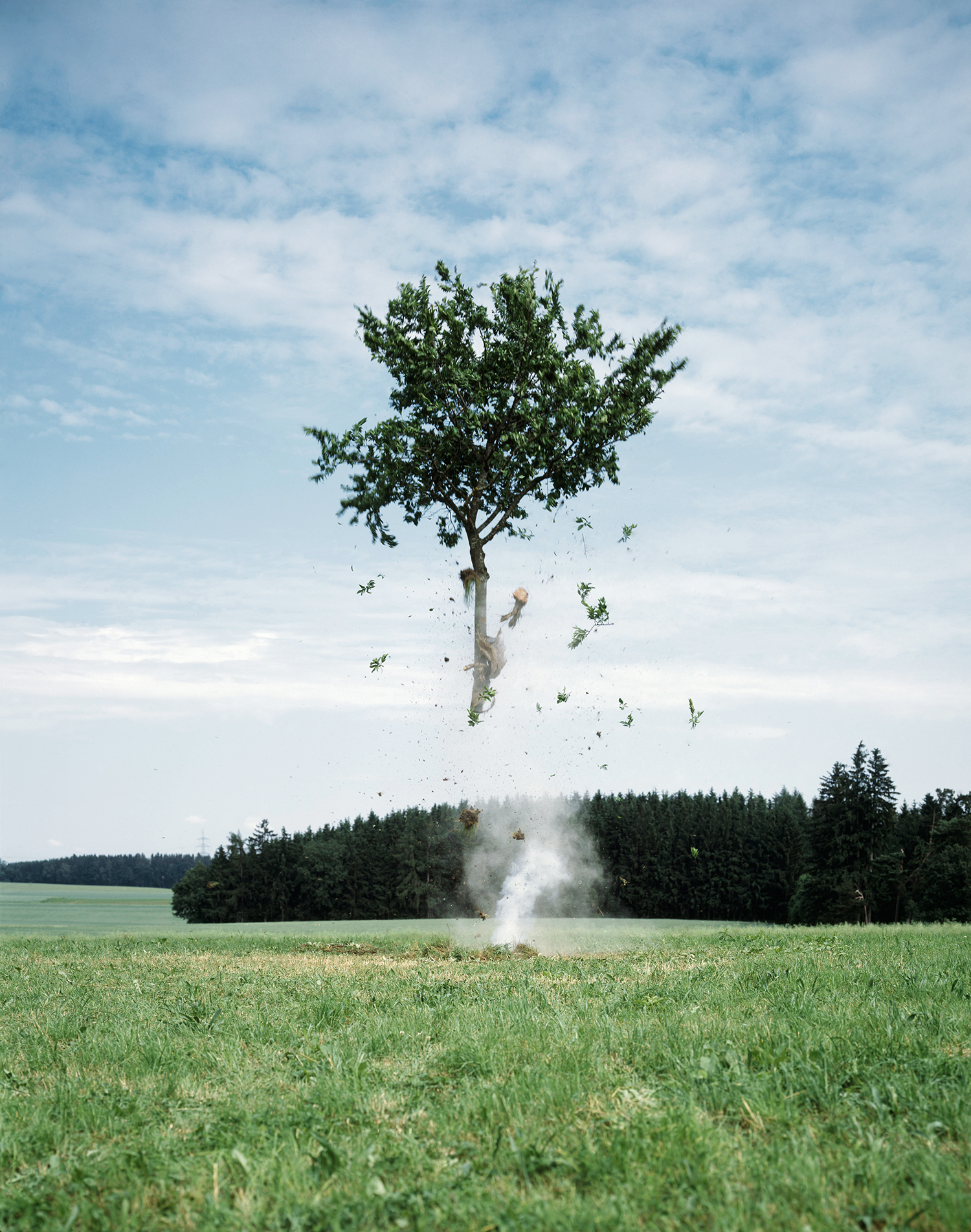 SVEN SCHUMANN — That is a technique you used multiple times in the beginning of your career.
MICHAEL SAILSTORFER — Yes, I also did a piece called 3 Ster mit Ausblick, which means something like “Three Ster with a View.” A Ster is one cubic meter of firewood. I bought this wooden house in the countryside and cut it into pieces with a chainsaw and burned it in its own chimney.

SVEN SCHUMANN — Until the entire house was consumed?
MICHAEL SAILSTORFER — Yes. In the beginning you have this wooden house in the country landscape, and then it’s more or less eating itself until you only have the stove and the chimney and the view of the countryside in the end. The forest and landscapes are still important themes in my work today.

SVEN SCHUMANN — I love the piece where you made trees explode and fly into the air.
MICHAEL SAILSTORFER — Since some fruit trees at my father’s farm were planted too close to each other anyway, I decided to blow up seven of them. I buried a huge cylinder with compressed air and put the roots into a pipe, so you could open a valve with a remote control and the compressed air would shoot the tree about 10 meters high straight up in the air. It was fun. I did it with a special effects company from Cologne that actually specializes in doing car stunts. It ended up being a video and a photo piece. 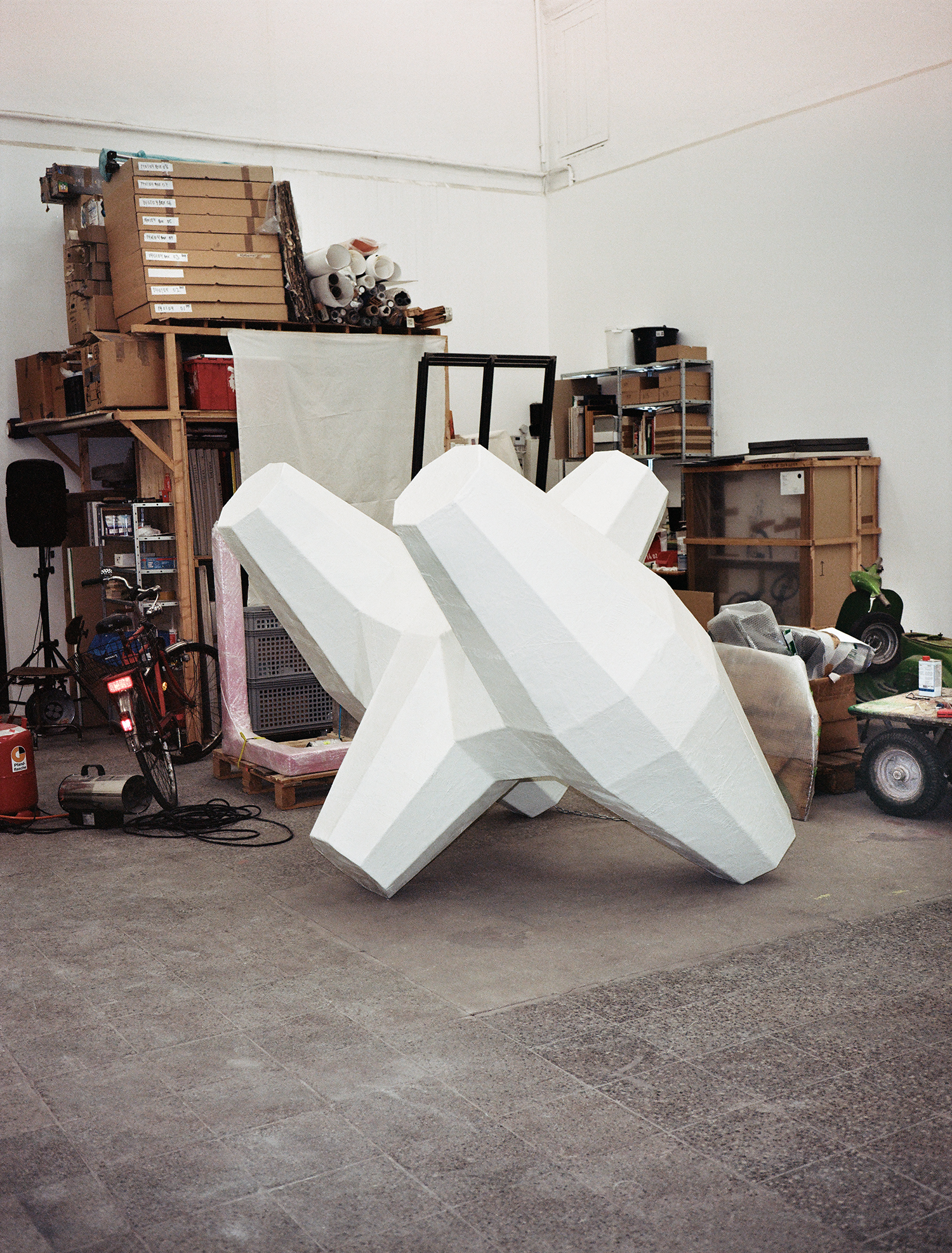 SVEN SCHUMANN — How has living in the city and doing work for galleries and museums changed your approach?
MICHAEL SAILSTORFER — It’s always a different situation, whether you do an outdoor piece for the countryside or you do a piece for a gallery space or a museum — thematically speaking, too. I started to do pieces like Zeit ist keine Autobahn, which is a spinning car tire pressed against a gallery wall, producing dust and the smell of burning rubber. I became really interested in how a physically small object like a car tire can occupy a much larger space like a whole gallery. When sound and smell are part of a sculpture, it’s a more economical piece. It’s smaller, but it fills up a large space. And it also catches the viewer with another sense. When you smell something, it immediately does something different with your brain.

SVEN SCHUMANN — Some memories are much more easily triggered by smell than by sight.
MICHAEL SAILSTORFER — Exactly. Immediately an image pops up in your head, or an idea where you had this experience or this similar smell before. You smell the popcorn from the popcorn machine, and it makes you think of the cinema or experiences you had at school when you were a child. 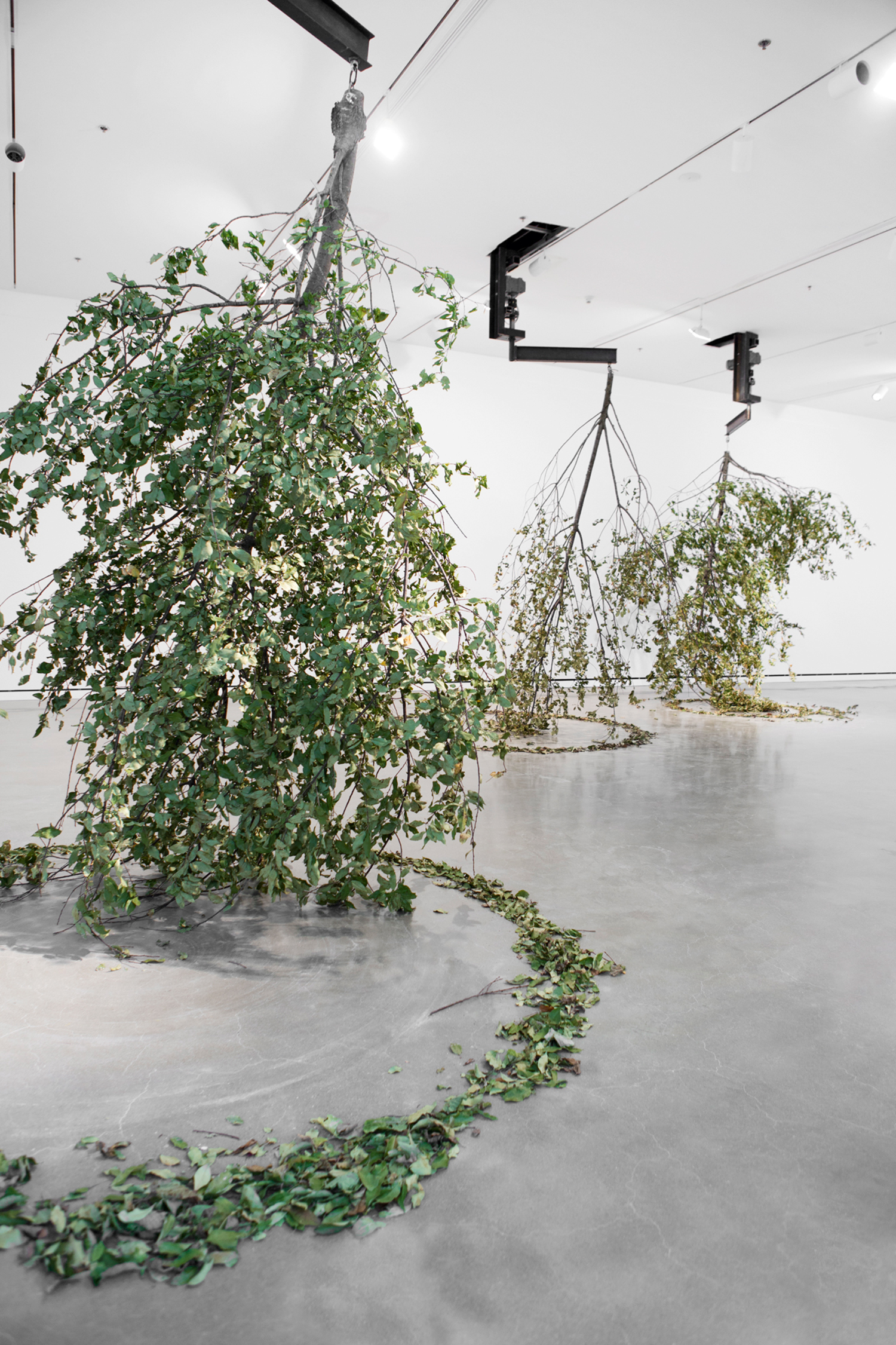 SVEN SCHUMANN — Do you think that smell is a more emotional sense than sight?
MICHAEL SAILSTORFER — Definitely. You’re not so conscious about it. When you walk through a gallery, you expect to have a visual experience. But I also like the moment where you enter the space, and smell does something more automatically. You’re not really as conscious of smell. You can close your eyes, and you can turn around, but the smell is always present. If you smell something very bad in the subway, say from a guy sitting next to you, it is much more difficult than if you see something that you don’t like.

SVEN SCHUMANN — The same thing can happen with sound, too. It’s more difficult to escape.
MICHAEL SAILSTORFER — Sound can be very brutal. I did these pieces called Reactor, which used microphones embedded in concrete to amplify the sound and the ambience of people walking through the space and the vibrations of the building. The more people who walk through the space, the louder it gets. But it’s a low frequency, so it really hits your stomach. It’s quite aggressive. There’s no way to escape it, so you really feel it. I am also currently working on a new sound piece about a drum solo by Dave Lombardo. 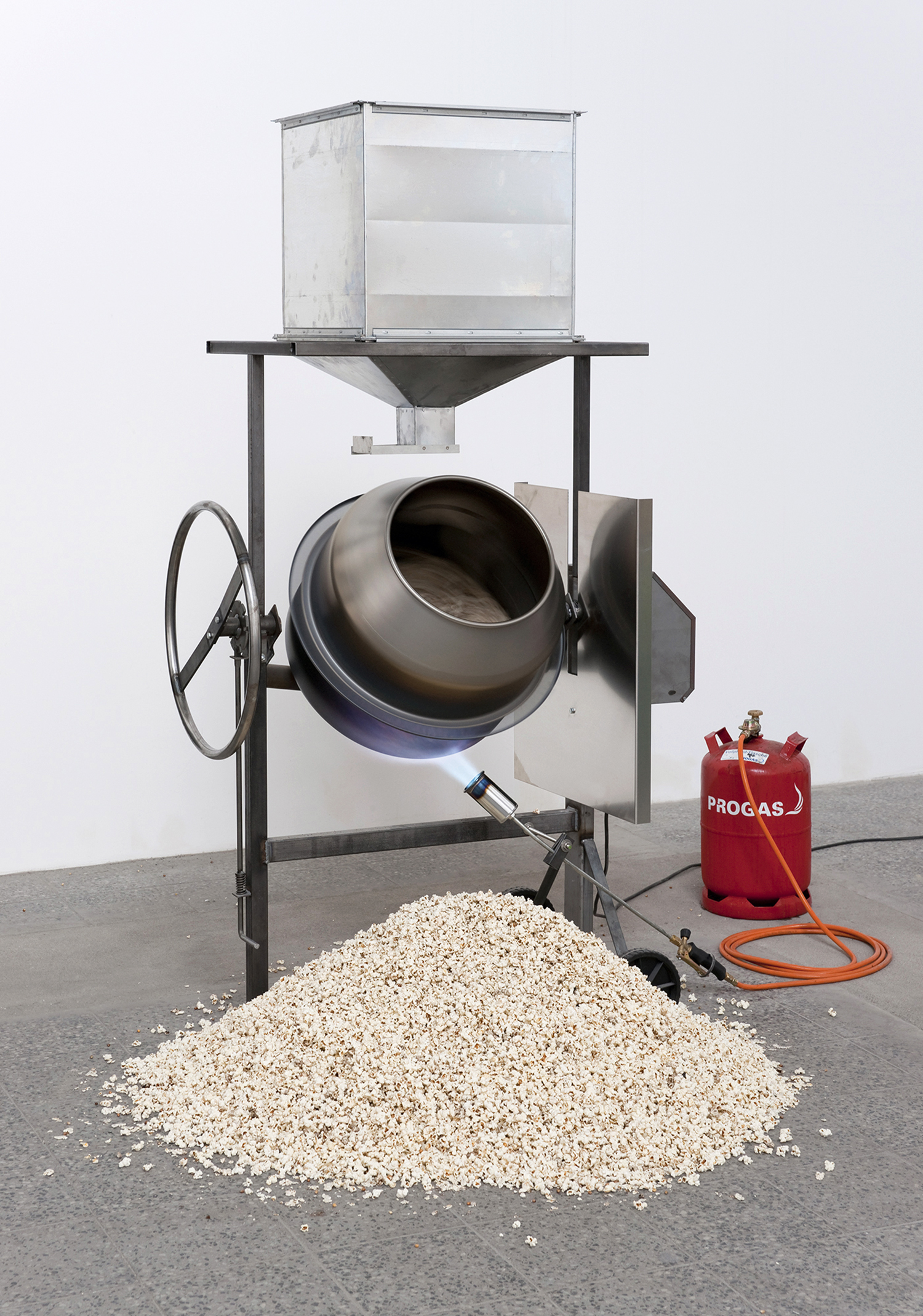 SVEN SCHUMANN — The Slayer drummer?
MICHAEL SAILSTORFER — Yes. It’s deconstructed and reprogrammed by a sound engineer who is usually doing sound effects for movies. Every part of his drum kit can be played on an individual speaker. So you can actually stretch out the drum kit within the architecture, and you can experience it by walking through the museum. On the other hand, I’m interested in how the architecture can become an instrument on its own. I’m thinking about maybe using something like Piezo speakers that make the walls and the windows vibrate and actually make the whole building the instrument, making it a whole structure that you can experience.

SVEN SCHUMANN — You also once made a drum kit out of a police car. Is it important for you to give the objects in your pieces a new purpose?
MICHAEL SAILSTORFER — I think that’s pretty correct. What’s even more important is what the first thing meant, or what its function meant. For example, the drum kit wouldn’t work with another car. It has to be a police car.

SVEN SCHUMANN — Why?
MICHAEL SAILSTORFER — It’s about this punk rock thing. You don’t like the police; you want to beat up the police car; it looks like it was made in one day. And that’s what it is: you take the police car, chop it up, bend it around, and make something else. I like the idea that you can do anything you like with your own hands, and create a new meaning or a new idea.