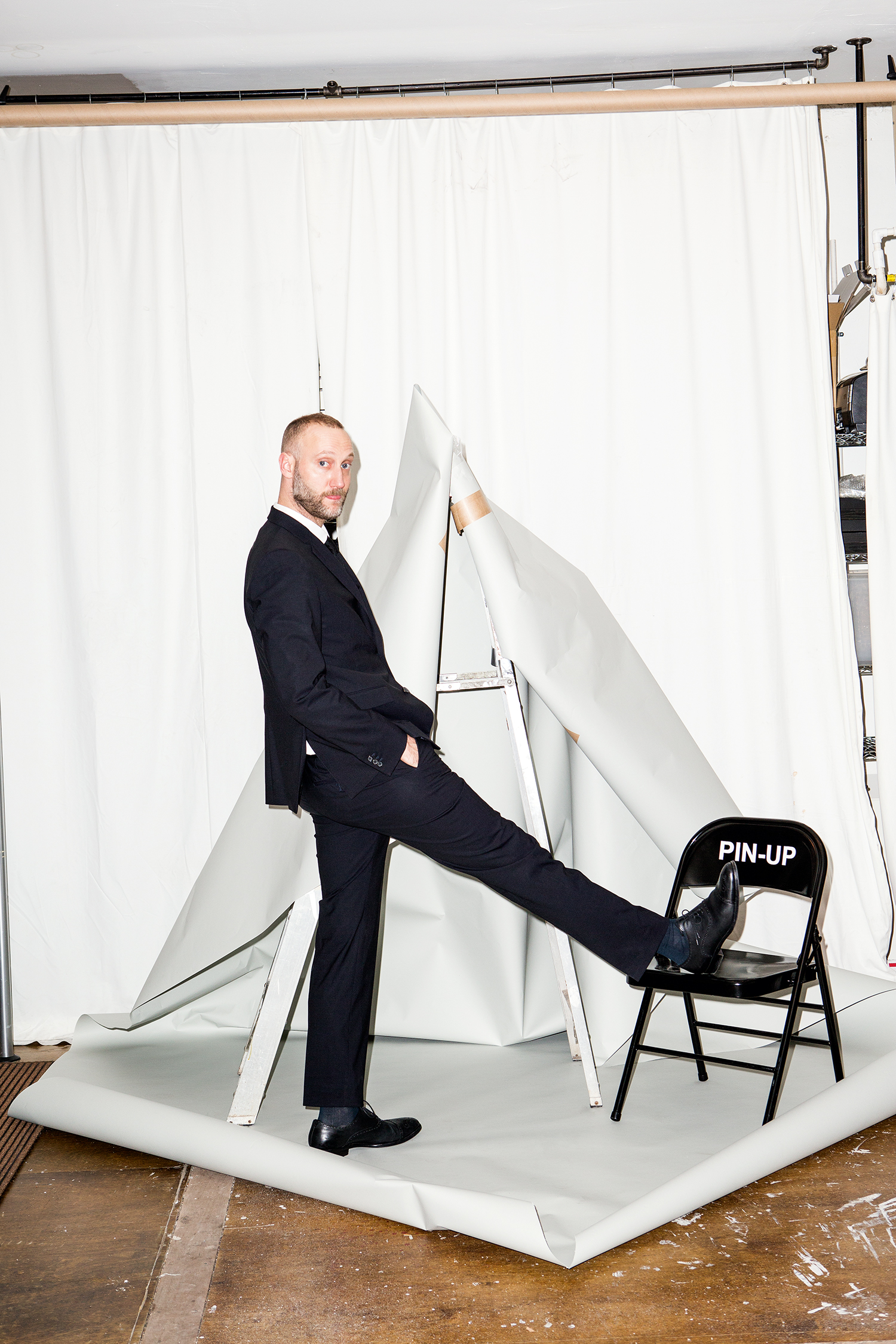 PIN-UP, a self-called “magazine for architectural entertainment,” is the brainchild of the German-born Felix Burrichter, a 37-year-old writer, editor, and curator based in New York City. Through his combination of unassuming intelligence and dry humor, PIN-UP has become a groundbreaking platform for creatives across the disciplines of fashion, art, politics, and architecture (of course) to wax over the ways in which buildings transform the cultural landscape. Burrichter’s next project will be curating the 2015 Design Exhibition at the Swiss Institute in New York, where he plans to recreate a technologically updated 21st-century version of Le Corbusier’s iconic Pavillon de l’Esprit Nouveau.

ALEX HAWGOOD — What is the genesis story behind PIN-UP?
FELIX BURRICHTER — I started PIN–UP while working as an architect in a big corporate firm, right after finishing my graduate degree at Columbia. I was absolutely miserable working there, having to draw bathroom plans for luxury malls in Macao. During a summer-long visa lapse, I spent three months working as an intern for BUTT magazine in Amsterdam, for Jop van Bennekom and Gert Jonkers, who also had just founded Fantastic Man. It was that internship that really inspired me to start my own magazine. I had always had an interest in publishing, but I never thought it would have been possible to make a magazine myself. After seeing Jop and Gert produce not just one, but two amazing magazines with essentially just the two of them plus me the intern, I came back to New York convinced that I had to also start an architecture magazine. But that it would have to be an architecture magazine that I would essentially like to read myself — informative as well as entertaining, with a strong emphasis on design and a strong visual identity, just like I had learned and observed with Jop and Gert.

ALEX HAWGOOD — When were you able to quit your side job and do PIN-UP full time?
FELIX BURRICHTER — It took five issues (and the Lehman Brothers crisis) until I was able to quit my day job and pursue PIN-UP full time. But frankly, when I started it, I didn’t even think I would be able to even make more than two issues. I had no idea it could ever be a viable business model, let alone something people would enjoy reading. Everything about it was entirely based on instinct, a kind of blind drive (if not obsession) to produce something that didn’t exist and that combined all the things I loved: architecture, art, design, and of course media, or specifically magazines. And also to get access to architecture and design idols I otherwise would have never had.

ALEX HAWGOOD — How does being a New York City resident affect producing a publication devoted to archi­tecture?
FELIX BURRICHTER — New York City inspires PIN-UP a lot, although I wouldn’t necessarily call it a “New York” magazine. It’s a combination of many influences accumulated from having grown up in Germany (in bougie, upper-middle-class Düsseldorf), but also having spent some time in high school in Southern California and later having lived and gone to school in Paris for five years. New York is about experiencing openness to new ideas and the mixing of genres. I think the latter is probably the biggest New York influence on PIN-UP: a fearlessness about mixing genres and conventions, and producing something entirely new that hasn’t existed before.

ALEX HAWGOOD — Who are some of the most pivotal architects and designers for you?
FELIX BURRICHTER — I’m beyond excited that, for example, in the current issue, we finally interviewed Mario Botta, the ’70s / ’80s super-architect who was kind of a childhood hero of mine. I first saw his houses in the German architecture magazine Häuser, which my parents used to subscribe to. I remember being captivated with Josephine Baker and the black-and-white striped house that Adolf Loos had designed for her in the 1920s in Paris (and which never got built). I remember my aunt telling me that Baker later lived in a castle in France and had all these adopted orphans, and I had this fantasy that I would live in a Mario Botta house, but the size of a castle, with my own family of 10 African orphans! I must have been only six or eight years old, and I would be up all night, just drawing these Botta-inspired houses, and I would model mock-interiors using Barbie lounge furniture, painting all the pink parts in black-and-white stripes.

ALEX HAWGOOD — It must be so thrilling to get to have conversations with some of the architecture greats.
FELIX BURRICHTER — But even though I’ve been able to cross off many people from my wish list (Rem Koolhaas, Zaha Hadid, Francis Kéré, Hans Kollhoff, Maria Pergay, Paulo Mendes da Rocha,
Martino Gamper, Julius Shulman, Luigi Caccia Dominioni, Ettore Sottsass, to name but a few), there are always new names added to it, so I’m not too afraid that we’ll ever run out of subjects. Two really big names I would very much love to interview are Frank Gehry and Renzo Piano. Mostly because their communication seems so controlled that it would be such a pleasure to see them let loose a little after the thousands of interviews they both must have given during their lifetimes.

ALEX HAWGOOD — How important for you is it to get immediate feedback on a current issue?
FELIX BURRICHTER — In many ways — this sounds so narcissistic — I do it for myself. All the stuff that is in each issue I am interested in myself. Sometimes I ask myself, “Who wants to read this shit?” Who wants to read my brain, you know? The funny thing is, after each issue I always feel like it is the best one I’ve ever done. Like with this current one being a “Norway Special,” I think it’s better than the last Milan-based one, which I thought was stronger than the issue before that.

ALEX HAWGOOD — Do you like to hear feedback on an issue?
FELIX BURRICHTER — The thing is, I love hearing positive feedback and when people say that they love the issue. But no one will ever tell you that they didn’t love the issue. I feel like with this issue there’s been some weird judgment against featuring the American interior designer and television personality Kelly Wearstler. It’s the PIN-UP equivalent of Vogue putting Kim Kardashian on the cover. I knew she was a divisive figure, but I didn’t realize people could spew so much disdain.

ALEX HAWGOOD — Snobbery, you mean?
FELIX BURRICHTER — Yeah, like, accusing her of being a wannabe artist or saying that she has terrible taste and is cheesy. You know, part of the reason I’m fascinated with her is that she captures an aesthetic without fully — how should I put it — understanding it herself. She’s super-intuitive. What Kelly does isn’t perfect by any means. I see her in the same tradition as Tony Duquette and those kind of people in Los Angeles who have their own idiosyncratic style, which a lot of people at the time thought was in really bad taste.

ALEX HAWGOOD — Have you done a lot of divisive figures in past issues?
FELIX BURRICHTER — In issue two or three, we did a story on Claude Dalle, a decorator to a dictator. Think elephants and zebra prints and gold. And before that, we did Anca Petrescu, a Romanian architect who did these absolute monstrosities. Sure, there are a lot of highbrow architects, but there’s always that weird person who wouldn’t necessarily find their way into an architecture magazine.

ALEX HAWGOOD — You have total editorial freedom to choose whom you feature. Do you set any editorial boundaries?
FELIX BURRICHTER — After 17 issues, I think there are now certain patterns to the PIN-UP formula, even if it’s just to make it easier for me. You have to have one big-name architect, one oddball, and at least one woman. Architecture is still one of those professions where women are still really underrepresented. And I think it’s time that changed.

ALEX HAWGOOD — Does the theme of female representation come up frequently with the women architects you profile?
FELIX BURRICHTER — Usually they don’t love talking about it, but it comes out eventually with some reluctance. I know Carla Juaçaba, who is in the current issue, talks about it, though she doesn’t love to do it. I mean, you just want to be recognized for your work and not through the lens of your gender or ethnicity or being amazing because you’re in a wheelchair. I wouldn’t want PIN-UP to be recognized because I am German-born. Not that anyone would think that way. I was just thinking of the one thing that makes me a minority in this country [Laughs].

ALEX HAWGOOD — I think what’s so exciting about PIN-UP is that it allows non-architects like myself entrée into a world that we don’t usually have access to.
FELIX BURRICHTER — Right! In that sense, I think it has remained unique. I see the magazine as a translator of architecture for non-architects, even though there are a lot of architects who read it. You could say that PIN-UP is for architects and their admirers.