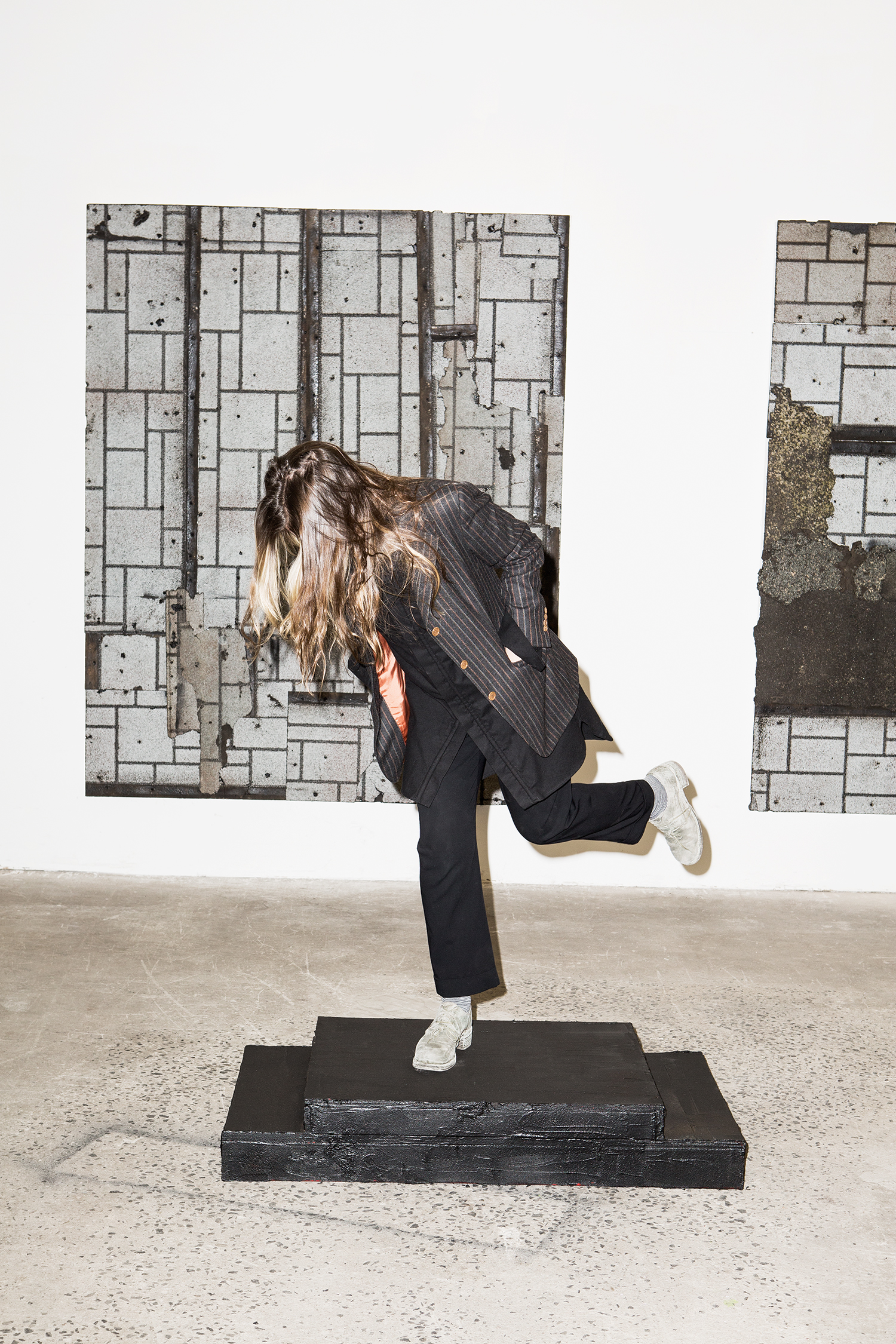 MAURIZIO CATTELAN — When did you start thinking of yourself as an artist? Is it something you can desire when you’re a child, such as being an astronaut or a dancer?
MARIANNE VITALE — I was inspired by the reproduction of Guernica that hung in my playroom as a young child. The adults must have overlooked that this image was a portrayal of the violence and agony of war. Regardless, there it was, an image I confronted for over a decade. Wide-eyed bulls, slayed horses with daggered tongues. Women in agony, dismembered soldiers, cracked walls. I picked up on the idea of transferring emotion through art. That could have been the inspired foundation.

MAURIZIO CATTELAN — How would you describe your practice?
MARIANNE VITALE — I wouldn’t, or couldn’t, simply because it’s ever-morphing through different methods and systems and manners and modes. I’m not so much a one-trick pony that has a habit nailed down. I’m more of a research and development lab continuously testing unpredictable formulas.

MAURIZIO CATTELAN — How do you decide a work is finished?
MARIANNE VITALE — I stop at al dente. Never overcook an idea. Just before you think it’s perfect you should pull it from the fire. A work retains heat at rest, continuing to cook for a little longer even after removed from the flame.

MAURIZIO CATTELAN — Is there a piece you regret having created? What is the biggest mistake you could make in your work?
MARIANNE VITALE — My entire œuvre is a metaphor for regret. And to the second question: an inappropriate plinth.

MAURIZIO CATTELAN — Do you worry about audience reaction while thinking through a new work?
MARIANNE VITALE — This can be a trap. But true, one should do a quick edit in anticipation of reception. For instance, I thought to title my last show “Erections.” But think of the commotion; the headline would read “Penis Envy” or something else off-topic, when I’m not referring to that in the slightest. After all, these sculptures are more visually and spiritually appealing in shape, size, and girth than any vertical improvisation of male flesh. The point is that, yes, it is hard to avoid any considerations about how an audience will react to an exhibition’s content, or to the material or even to a title. Instead of compromising, I rack my brain for a better solution.

MAURIZIO CATTELAN — What do you get from art? What would you like others to get?
MARIANNE VITALE — It’s more of a give than a get. I’m not directorial that way: to each his own.

MAURIZIO CATTELAN — Is fear involved in your work?
MARIANNE VITALE — In making it? No. In facing it? No. Fear for me is outside the studio. Going to art functions. Fear is someone expecting me to concoct, retrospectively, a theory of my process and each body of work, and quite frankly it’s injurious to my practice. And fear, if we’re talking real fear, to be serious for a minute, fear is waking up and bearing the world’s news.

MAURIZIO CATTELAN — Is there any space left for humor?
MARIANNE VITALE — Funnily enough, they just named a street in Morningside Heights after George Carlin. West 121st Street, between Amsterdam and Broadway. That’s a fair amount of space. 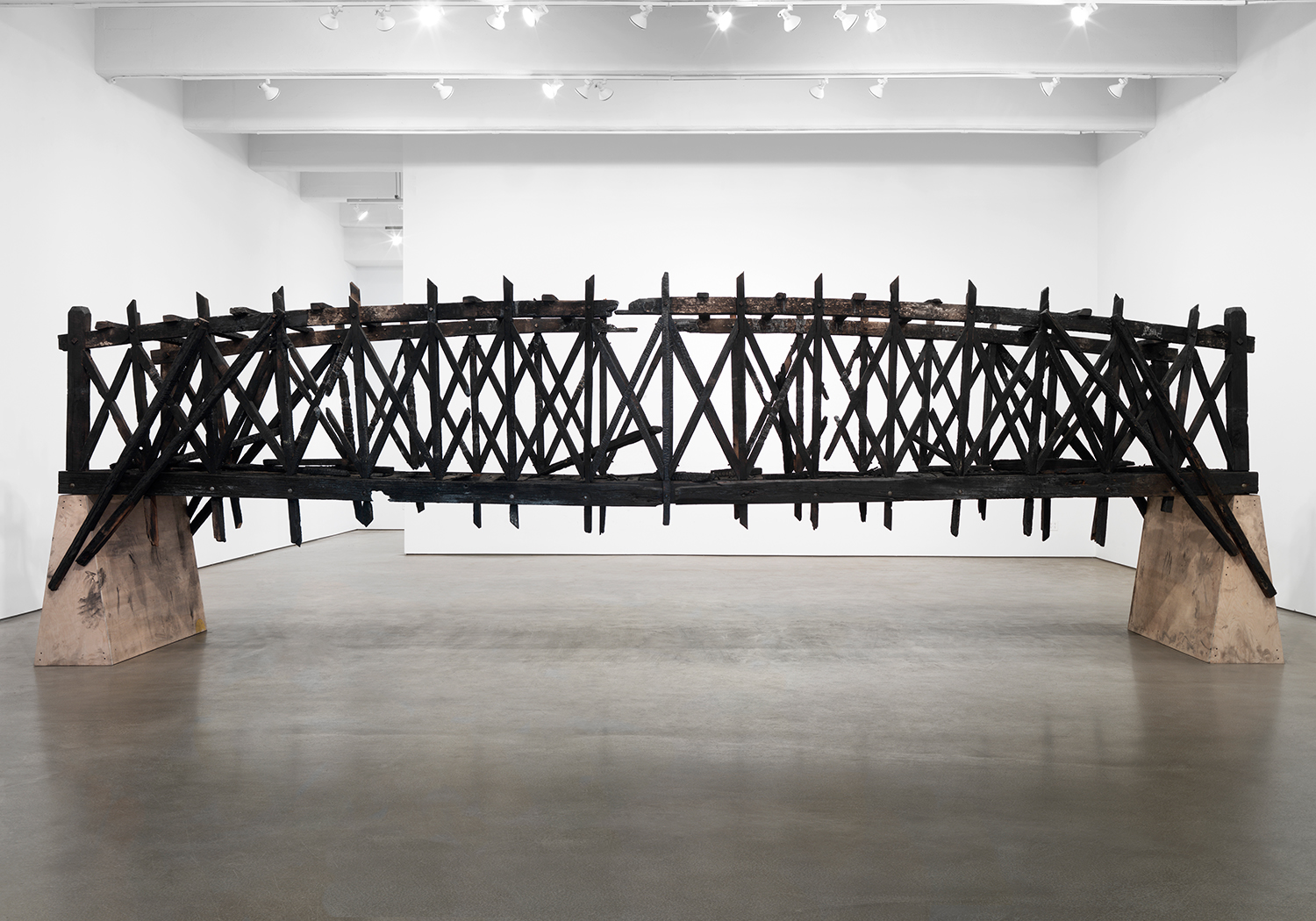 Burned Bridge, 2012, reclaimed lumber courtesy of the artist and Zach Feuer Gallery, New York
MAURIZIO CATTELAN — What is your view of contemporary art today? Is contemporary art a panacea for all that ails the world?
MARIANNE VITALE — I lock myself up in the studio and try to avoid that view. Too overwhelming. The irony of your second question answers itself. The elitist enclave that is the art world is not focused on solving world crises. Sure, there are generous artists and institutions devoted to bettering the lives of children and community, or auctions and benefits that raise millions for hurricane-stricken families, etc. But these gestures are few and far between. I see no correlation between contemporary art and the hopeful obliteration of “what ails the world.”

MAURIZIO CATTELAN — What do you think is lacking at the art world’s table? And what is in surplus?
MARIANNE VITALE — Potters and groupies.

MAURIZIO CATTELAN — Do you think the art world is still a masculine world? If yes, what do you think is the right antidote?
MARIANNE VITALE — Of course the art world is still masculine. The world is still masculine. It has yet to recover from the collapse of the great matriarchal societies. Until that happens, women will be suppressed across the globe. From forced genital mutilation to the flying fists of their NFL linebacker husbands to pharmaceutical industries warping identities and integrity through plastic surgery. Shall I go on? It’s all so heavily twisted and diabolical. Let’s not be so naive as to think the art world is a refined safety zone, immune to certain levels of male dominance. As for an antidote … Ooof. Why are women artists exclusively and relentlessly being asked these questions? Must we be bombarded by these discussions related to gender dynamics until the cows come home!? There is not enough time in the day to nurse my own creativity, if I am to be burdened by such unappeasable inquiries! Why must we be the diagnosticians to this bullshit? Male artists, why don’t you put down your tools and explain in detail why your side created the myth of feminine inferiority so long ago? Your recorded history begins with a patriarchal revolution, does it not? How bitter and defensive our former dominance made you! 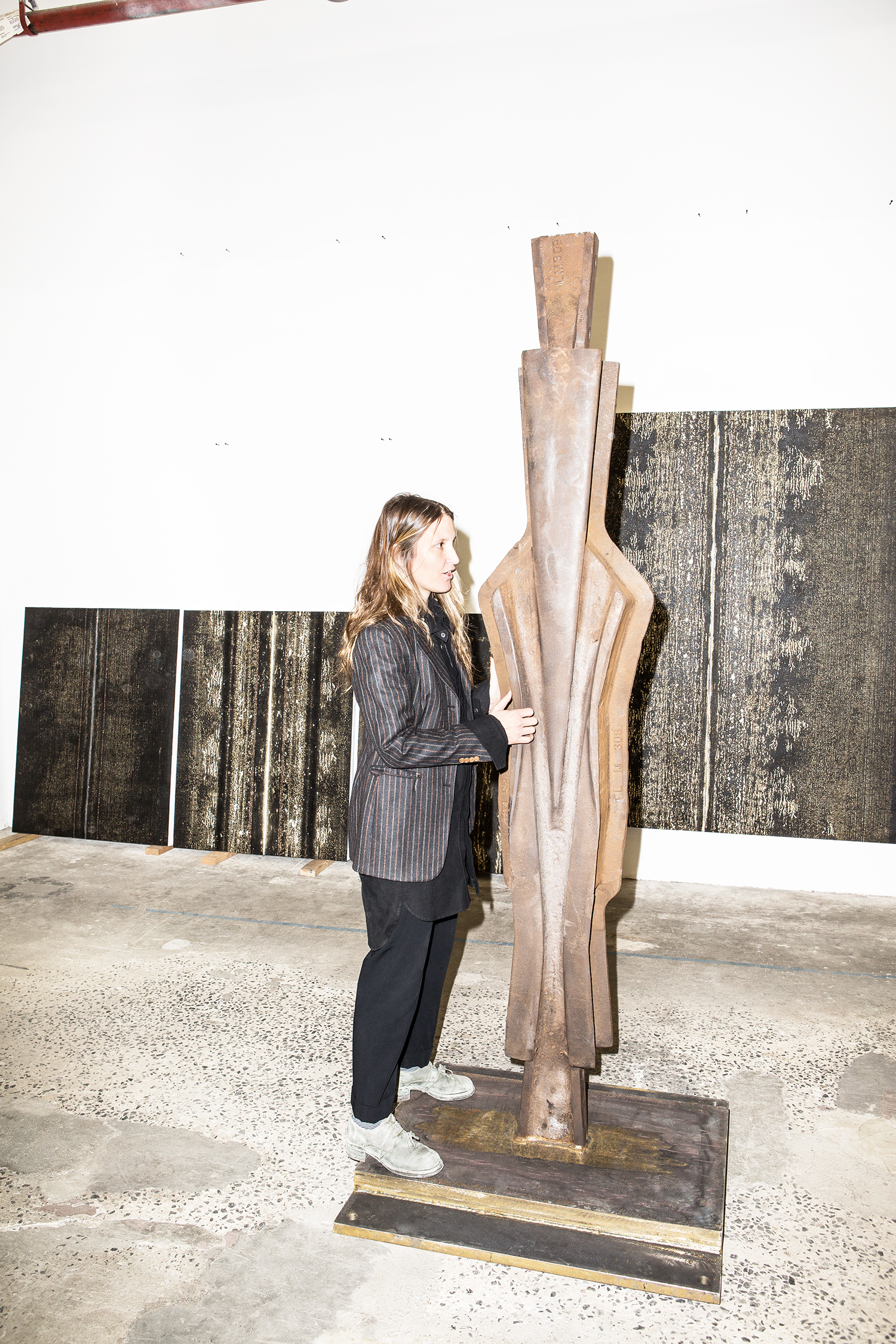 portrait by Jeremy Liebman
MAURIZIO CATTELAN — Does art need any explanation? Isn’t it all about the attention people bring to it?
MARIANNE VITALE — No and no.

MAURIZIO CATTELAN — Is making art an urgent matter for you?
MARIANNE VITALE — It’s an emergency.

MAURIZIO CATTELAN — Is there a work by another artist that you wish you had made?
MARIANNE VITALE — Tetsuo: The Iron Man. I couldn’t summon any creativity for years after sitting through that film. It should’ve been mine!

MAURIZIO CATTELAN — Are you interested in fashion? Is being an artist in the ’10s like being a top model in the ’90s?
MARIANNE VITALE — I never gave a shit about fashion. I was shoveling shit in a zoo upstate in the ’90s. No magazine subscriptions made it up that way.

MAURIZIO CATTELAN — How would you define yourself today?
MARIANNE VITALE — This interview should shed enough light for one day.

MAURIZIO CATTELAN — Where do you see yourself in 10 years?
MARIANNE VITALE — Let’s start with 10 minutes.

MAURIZIO CATTELAN — Have you ever considered quitting?
MARIANNE VITALE — Well, you know what they say about quitters:

I’ve always interpreted that to mean: one mustn’t desert the mission unless prepared for a shitstorm.